From its perch in the Blue Ridge Mountains, the town of Franklin is not just a haven for Appalachian Trail thru-hikers — it’s a cause for celebration. “Hikers generally start the trail in Georgia in March, so by the time they get here, they’ve been hiking about 110 miles,” says Deborah Gedling, secretary of the Nantahala Hiking Club. “Franklin is the perfect stopping point.”

Twelve years ago, Franklin was the very first town along the Appalachian Trail to be named a Certified Appalachian Trail Community, a designation that local businesses now celebrate with the month-long AT Mile 110 Celebration. “It starts the first day of spring and goes until Earth Day,” Gedling says. But springtime is just the start of Franklin’s seasonal celebrations. Read on for a few of our favorite seasonal events — and just like the hikers, plan to stick around to experience all the area has to offer.

Get to know your mountain side exploring the mountains of Western North Carolina in the Land of the Noon Day Sun, Franklin, and Nantahala. 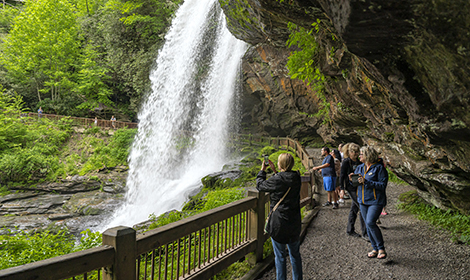 When it first started, the AT Mile 110 Celebration was focused around the hikers, says Cory McCall, co-owner of Outdoor 76. “The idea was, we could catch as many hikers as possible and welcome them to Franklin with some sort of service or celebration.” Outdoor 76, for example, hosts Flicks, Food, and Brews, an event for hikers to grab a drink and a bite to eat, watch a movie, and mingle with people in the community. The library hosts seminars like Backpack Basics, and the breweries put on a Hiker Chow Down, sponsored by the hiking club.

The members of Franklin’s First Baptist Church also serve breakfast for hikers seven days a week. “Their congregation just voluntarily does it, and they give out stamped postcards, so the hikers can write home to their friends and family,” Gedling says.

Every Mother’s Day weekend, gem enthusiasts from around the country descend upon Franklin for a gem show centered around the town’s mineral and mining history. But you don’t have to be a rock hound to experience the thrill of treasure hunting.

And in the “Gem Capital of the World,” your chances of finding something special are good — “especially if you don’t mind playing in the dirt,” says Jennifer Klatt, whose husband’s family owns Ruby City Gems on Franklin’s Main Street, as well as Masons Sapphire Mine, the region’s last dig-your-own native mine. That means you can fill your own bucket at the mining area, explains Klatt. “Ruby, sapphire, and garnet is what you typically find around here,” Klatt says. “We’ll help you identify what you find.”

Ready to plan your trip? Here’s a complete list of Franklin’s gem mines. 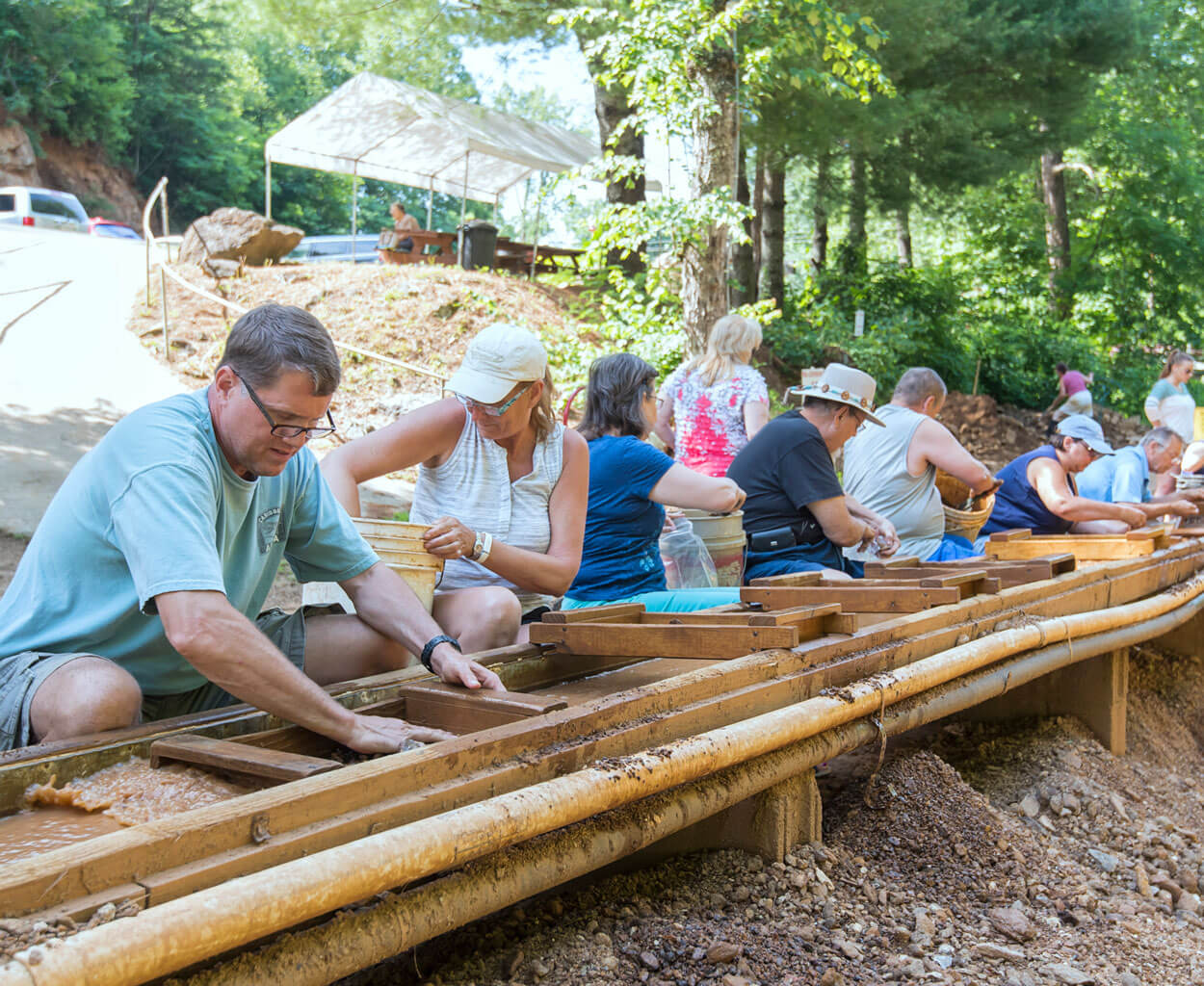 When the Nantahala River has its official Nantahala Recreational River Releases, scheduled five times a year between April and September, skilled kayakers come from near and far to launch their boats into the challenging level four and five rapids. “When they open the dam and release the river, it floods one of the river’s lower tributaries,” explains Patrick Graham, a member of the Nantahala Tourism Development Commission. “You need to be an experienced kayaker to free-flow down the river, and it draws crowds in every time.”

When the river is not being used by kayakers, it’s the trout capital of the world. “We have people come in from all over the world to fish,” Graham says. “There are so many trout, and so much natural beauty. Nantahala is mother nature at its finest.” 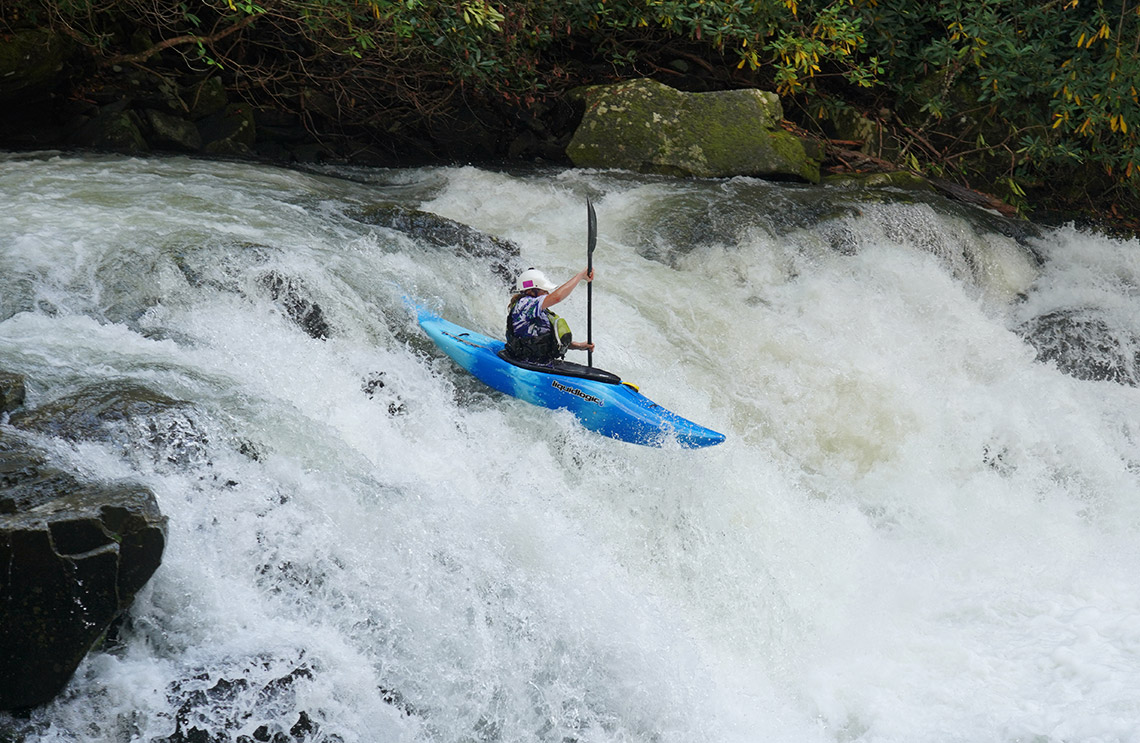 Test your kayaking skills in world-class rapids on the Nantahala River. photograph by Eric Haggart

If you’re in town for the Fourth, stake your spot near Town Hall for the start of Franklin’s annual parade. Then hang around for a morning of family fun with free bounce houses, watermelon, and popcorn. There’s even a patriotic pet contest. That night, come back to watch fireworks downtown or head to Lake Nantahala for a show over the lake.

Check out times for the morning festivities.

After Arrah Belle Wilson Johnson’s husband died in 1929, she invested her entire life savings to buy The Franklin Press — a newspaper that never missed an issue while many others folded during the Great Depression. Then there’s Laura Robertson, who empowered a group of women milliners to support themselves and their families for years after the Civil War. Stroll along North Carolina’s only women’s history trail to learn more about their stories and those of other prominent Franklin women. Then cap your walk with a visit to the Macon County Historical Museum, housed in a 1904 building that is among the oldest in town.

Pickin’ on the Square

On Saturday nights from late May through mid-October, pack a picnic and bring your lawn chair or blanket for a night of free, foot-stompin’ entertainment at the Gazebo on the Square. “We all gather around seven, and the music ranges from bluegrass to oldies,” says Sabrina Scruggs, who’s worked for the Town of Franklin and helped host events for the last six years. “Our kids love it. There are a few vendors, and it just feels like a small-town Saturday night.”

Some folks come for the pumpkin pie-eating contest, others for the costume contest, still others for the parade. Scruggs swears by the World-Famous Pumpkin Roll — an event where, for just $1, you can stand at the top of a hill alongside your fellow contestants, drop your pumpkin, and hope that it rolls farther than all the others. The winner takes home $100.

“People assume the pumpkins are going to go down the hill and then up the other side in a straight line,” Scruggs says. “But it’s kind of funny. Literally half roll off the path in random directions. People end up jumping and dodging the pumpkins!”

Get a full listing of the 26th annual Pumpkin Fest events. 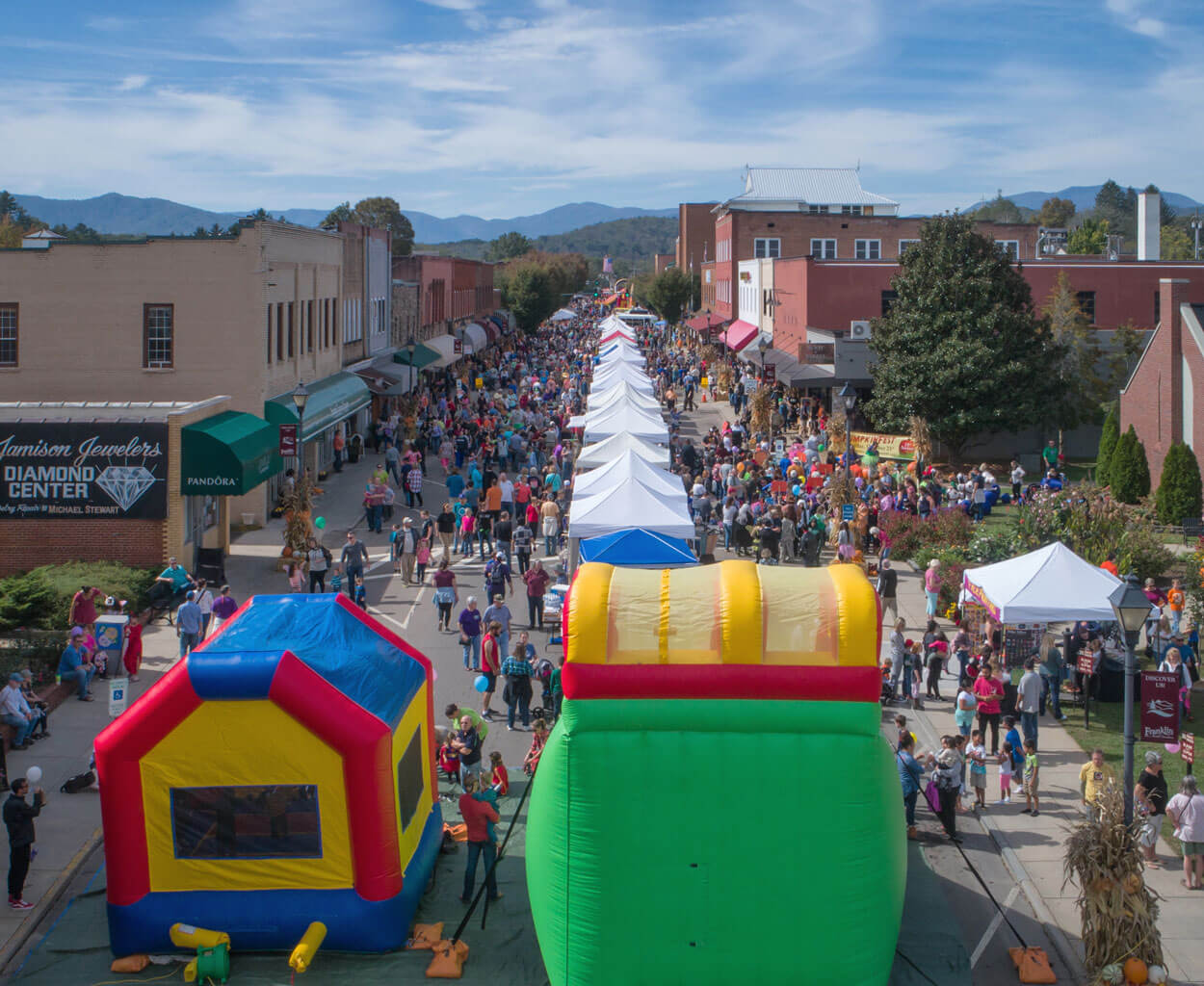 PumpkinFest is one of the most popular fall festivals in western North Carolina. photograph by Eric Haggart

In the late 1700s, naturalist William Bartram explored the area surrounding Franklin. On this annual 25K and 50K trail race that follows the Bartram Trail through the center of Franklin and up to Wayah Bald, you can see the land through his eyes.

This year’s race is October 3, and while the trails are just as beautiful the rest of the year, they’re especially stunning in the fall. “In addition to the changing of the leaves and the crisp, cool air, the beautiful thing about the trail in the fall is that as the leaves start to come off the trees, the views are incredible and it gives you the opportunity to see the terrain,” McCall says

McCall, his wife, and their three children, ages 3 to 8, love to hike the Siler Bald Trail, which can be about five or nine miles, depending on where you access it. “Unless you’re a seasoned hiker and are used to more mileage, I always recommend accessing it from Wayah Gap,” he says. “You’ll walk along the Appalachian Trail for almost two miles, which drops you out at what’s called Snow Bird Gap, the base of a big long grass field that leads up to Siler Bald.”

The second option is to hop on 64 West and access the Appalachian Trail at Winding Stair Gap. “It’s about 4.5 miles from the Winding Stair side to Siler Bald, so this hike is almost a 9-mile round trip,” McCall says.

On two Saturdays during the holidays, you can go walking in a winter wonderland — downtown Franklin, that is. Downtown shops feature living window displays (think live musicians), Santa Claus waits to hear your wishes, and free carriage rides and train rides give kids and parents alike a romantic tour of downtown.

With a total of 1,503 seats — including 62 box seats — this performing arts center in the heart of downtown Franklin can host just about every imaginable event. Whether you like large-scale theatrical productions or intimate movies and lectures, you’ll find it here. After a day of shopping or hiking, plan to settle in and enjoy a show. This year’s scheduled winter events include Disney’s Beauty and the Beast, and Rudolph the Red Nose Reindeer — The Musical.

Get an updated listing of upcoming events to help you plan your trip.