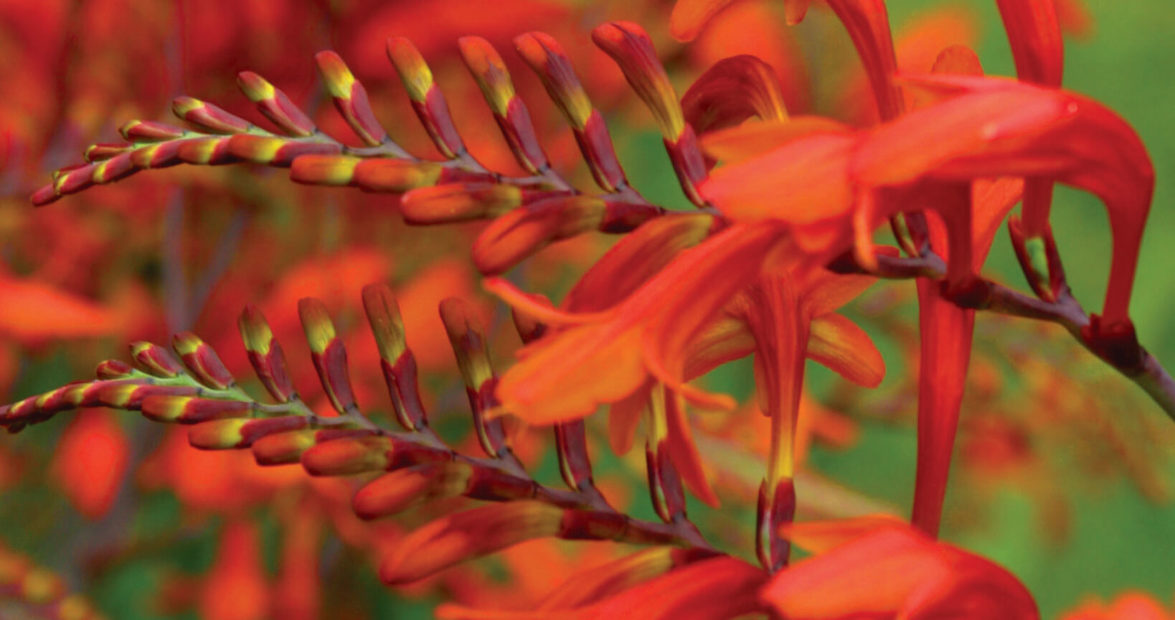 Bloom for bloom, Crocosmia (crow-KOS-me-ah) is capable of putting on as dazzling a summer display as the more popular daylilies and cannas in North Carolina gardens. As the small flowers begin to open, they resemble the trumpet-shaped blossoms of honeysuckles. However, the petals continue to open and bend back until each flower fully parades its pistil and stamens. The flowers are displayed on drooping fans held up by 30- to 36-inch-tall arching stems that bob in the slightest breeze and showcase as many as 50 blooms per stem.

Imagine the color of a fire truck, and then make it even brighter — that’s ‘Lucifer,’ a devil of a cultivar that literally glows in a perennial border. It gets plenty of competition from the reddish-orange ‘Polo.’ More hot hues radiate from ‘Emily McKenzie’ with her orange blooms and simmering, reddish-brown centers. The orange buds of ‘Jenny Bloom’ also heat up to molten golden-yellow blooms, while calmer colors come from ‘George Davidson,’ which displays sedate, lemon-yellow flowers.

Crocosmia corms, which are hardy in our state, are best planted this month. While the plants do bloom in July, sometimes they will be shy about putting on a big flower show their first year in the garden. But by the second year, they are usually in full flaunt.

For the best bloom production, situate the corms in a site that gets full sun with, if possible, a bit of shade later in the afternoon. Also, improve the planting site by incorporating plenty of compost or quality topsoil as well as a little bit of high-phosphorus fertilizer while preparing the bed. When the summer begins to simmer in June, add three to four inches of mulch to help stabilize soil temperatures and conserve ground moisture.

Crocosmia might be hard to say at first, but in the summer when its flowers are in their grand glory, it is easy to appreciate the decision and effort of planting them in the spring.

Four Things to Remember this May

1. Want the best production of fancy foliage from caladiums? Just remember that caladiums are pigs — they need generous amounts of water and fertilizer on a regular basis in order to continue producing bright new leaves through the growing season.

2. Scented geraniums are at their best when they are in the way — in other words, place them at the front of a border, at the corner of a path, or close to a doorway where passersby will brush up against them, releasing the plants’ sensational aromas.

3. There is still plenty of time to plant summer vegetables this month, but why not get creative beyond the veggie patch? Edibles such as okra, eggplant (especially ‘Neon’), and peppers are rather ornamental plants that can add to the beauty of a perennial border or annual flower bed.

4. A great weed block to combine with organic mulches in the spring is a layer of three to four pages of newspaper. Placed on the ground first and then covered with mulch, this paper barrier will prevent many weeds for at least one growing season before decomposing.