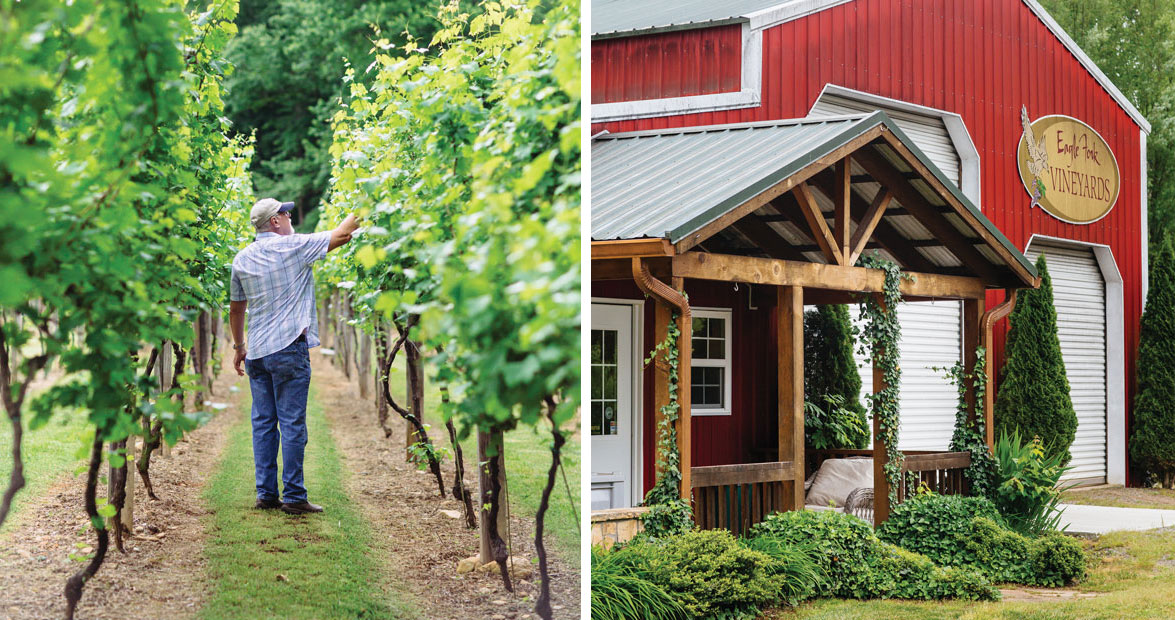 As the sun peeks over the Great Smoky Mountains in Hayesville, Eagle Fork Vineyards is alive with sound. The rush of a nearby stream blends with soft classical music, which emanates from speakers mounted on posts among the vines. This music isn’t for visitors. It’s not even for the enjoyment of the owners, Jerry and Teresa Smith. It’s for the grapes.

It sounds fantastically romantic. As the music plays 24 hours a day during the growing season, the grapes absorb the sound. When they’re crushed and bottled, the music is captured, too. Then, when the cork is pulled, the melodies are released. But while the ambience is nice, the music does have a more scientific purpose — keeping bugs away.

Jerry learned about this technique at a winery in Tuscany. The owner had installed speakers in the vineyard after reading that ancient Romans had played music to their grapes to help them grow. At first he was skeptical, but a study by the University of Florence in Italy discovered why: Bugs didn’t like the music.

But why classical music? Why not bluegrass, or blues? It turns out, the varying frequencies in classical music make it unique in its ability to repel bugs. So while Jerry is playing Beethoven and Chopin, he never has to spray with pesticides. “And,” Jerry says, “it’s just pleasant and beautiful.”

Growing grapes is in Jerry’s blood. His father was a grower for Welch’s in New York, and Jerry grew up helping out (somewhat reluctantly) on the farm. When he left for college, his dad asked if he would come back to work. “I remember,” Jerry says, “clear as a bell, looking at him and saying, ‘Dad, I will never, ever in my life grow grapes. Never.’”

But after retiring to Florida in 2004, Jerry was bored. So when he and Teresa moved to Hayesville to be closer to family, Jerry told the real estate agent, “I was looking for a place where I could put a house on the side of the mountain, that looked down into a valley, that had a stream flowing through it, and that was suitable for growing grapes.” At the 40th property, that’s exactly what they found.

Eagle Fork Vineyards opened in 2010. At the tasting room just down the road on Highway 64, they pour samples of crisp Classical Riesling, peppery Cabernet Franc, award-winning Catawba, and four flavors of wine slushies.

For Jerry, it’s the people who make all the hard work — the same work he hated as a kid — worth it. “It’s just the pleasure of being able to create something with my own hands and have people enjoy it,” he says. That, and the joy of pulling the cork on a bottle of wine, pouring a glass, and tasting the music.