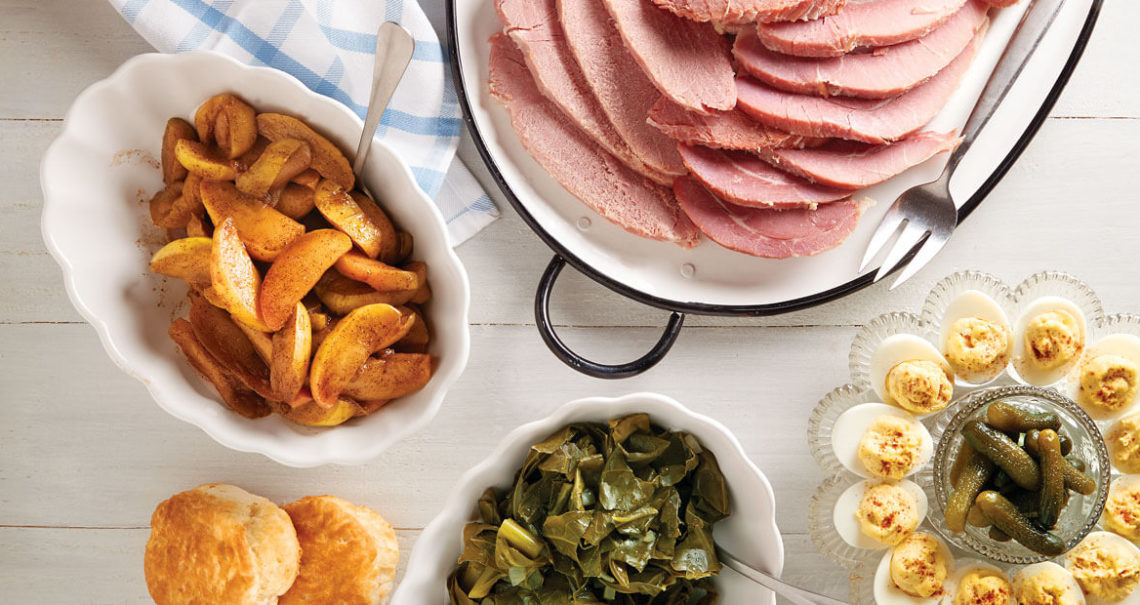 I wanted to cook a country ham, which, on the face of it, seems a bit odd, since country ham is already cured, aged, and often smoked. But in our family, we cook our country hams before serving. And we’re not alone — even though those Virginians, hoity-toity as ever, insist on baking them.

Whatever. I cook mine, and doing so requires my mother-in-law’s country ham recipe. Martha Hight, of Henderson — that’s pronounced Hen-son, of course — didn’t have a deep bench of go-to recipes, but the ones she went to were star players. She went all in on tradition, and anyone else’s thoughts on that matter mattered little. Thirty-eight years after meeting her, I’m still just coming around to her approach to holiday sweet potatoes: boiled and then smashed instead of cut into wedges like God and my mama always did. Martha’s treatment of country ham is a perfect example of her approach to cooking: simple, straightforward, and entirely reliant on the natural goodness of whatever’s fresh at the time. And a country ham, of course, is fresh 365 days a year.

I love the surprise of finding long-lost recipes with old notes hand-scribbled in the margins.

Google “how to cook a country ham,” and Alton Brown’s recipe is a top-three hit. But the Food Network star’s preparation involves six steps, 261 words, pickle juice, and a liter of Dr Pepper, for crying out loud. Martha’s requires two ingredients — ham and water — and takes up 44 words and so few steps you could spit it all out over the telephone without taking a breath. I include it here in its entirety, except for the yellowed tape, crinkles in the paper, various splats and splotches of what I assume to be ham juice, and the knot in my throat that forms each time I see it:

The first time I followed this recipe, all was just dandy until the second part of Step 4. Martha “browned” her cooked country ham under the oven broiler, a feat that requires exquisite timing and catlike reflexes. My timing was un-exquisite, and my reflexes were more akin to a porch hound’s than a feline’s. The ham went up in flames, as did the stove. But enough of this tangent.

These days, finding Martha’s country ham recipe requires leafing through my recipe folder. I started the collection decades ago, using a standard manila file folder. Over the years, I’ve crammed it full of recipes ripped out of magazines, email printouts, napkin scraps, and ratty old notepaper. My entire culinary life is in there, from my mama’s goulash that I cooked in my college dorm room to the early-marriage meals of stovetop lasagna and ham-and-butterbean casserole to at least a dozen ways to cook squirrel. And the folder is still hanging in there, too, in spirit, at least — two soiled, torn, ragged sheets of manila that separated sometime in the 1990s. I refuse to toss them out, even though pulling out my recipe folder now requires standing on a kitchen chair and reaching with two hands into the cabinet above the stove to retrieve a ramshackle pile of papers that wriggles and shifts in your grip like a wet cat.

I spread the pile out on the stovetop to sort through the papers like an archaeologist digging through promising dirt. I love the surprise of finding long-lost recipes with old notes hand-scribbled in the margins. “More coriander!” “Funeral at 2 o’clock.” “Needs collards?” I love the smell of moldering paper and mayonnaise smears that date to the Lyndon Johnson administration. I love the discoveries — there’s Markie’s childhood recipe for “Homade Lemodade,” complete with pencil sketches of her little red wagon-based lemonade stand. 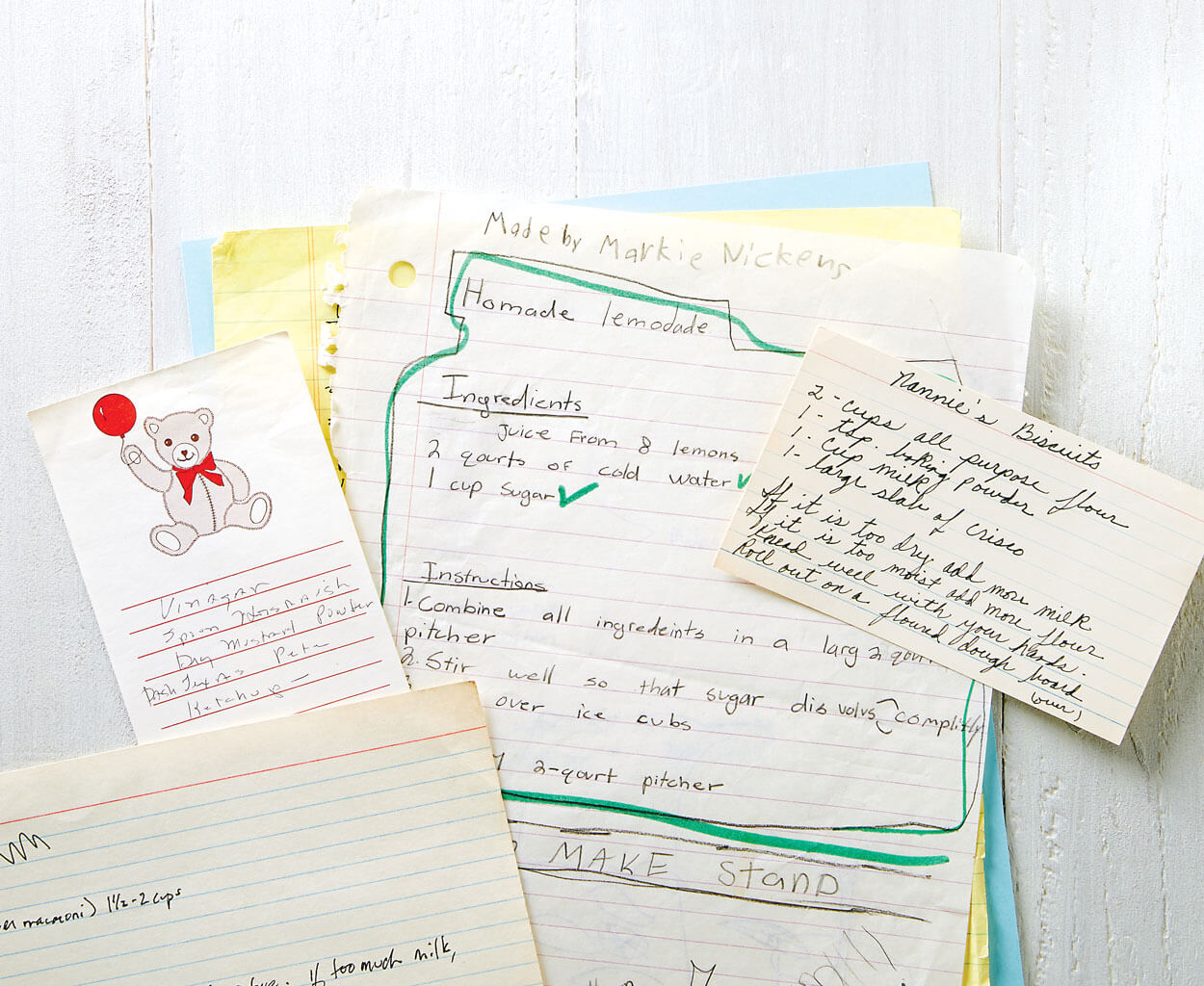 From barbecue sauce to biscuits to “lemodade,” perusing the family recipe collection is a walk down memory lane.

And holy cow, there’s my father-in-law’s recipe for barbecue sauce. It’s another example of the, um, more intuitive approach to the culinary arts taken by the far side of the family tree. Stubbs could count on the fingers of half a hand the items that would draw him into the kitchen — vegetable soup, omelets, and steaks on the grill, if applying meat to hot iron is indeed a recipe. But his simple country lawyer barbecue sauce was a sublime rendering of common ingredients into an uncommon treat. Like his wife, he minced words in a very unlawyerly manner. To wit:

I love the vagueness of this approach. A teaspoon of horseradish? A tablespoon? And what is a “dash,” anyway? It’s almost as if Stubbs figured that anyone who couldn’t sort out the quantities and stirring methods didn’t really deserve to make a country lawyer barbecue sauce to begin with.

And there it is. I pull out the country ham recipe, 10 lines of Martha’s instantly recognizable handwriting on a yellowed 3-by-5-inch index card. I chuckle. Like country ham itself, I was a bit of an acquired taste for Martha. Sending her daughter into the world with a mullet-coifed, earring-bedazzled freelance writer was a notion that required a bit of soaking in and warming up to. But once we soaked, browned, and bonded, Martha and I were thick as thieves. I pull out the largest of her three roasting pans and review the process.

All four steps, just like I remembered. I can’t help but add a couple of salty tears to the meager ingredients listed on the tattered index card, and then I get to cooking.