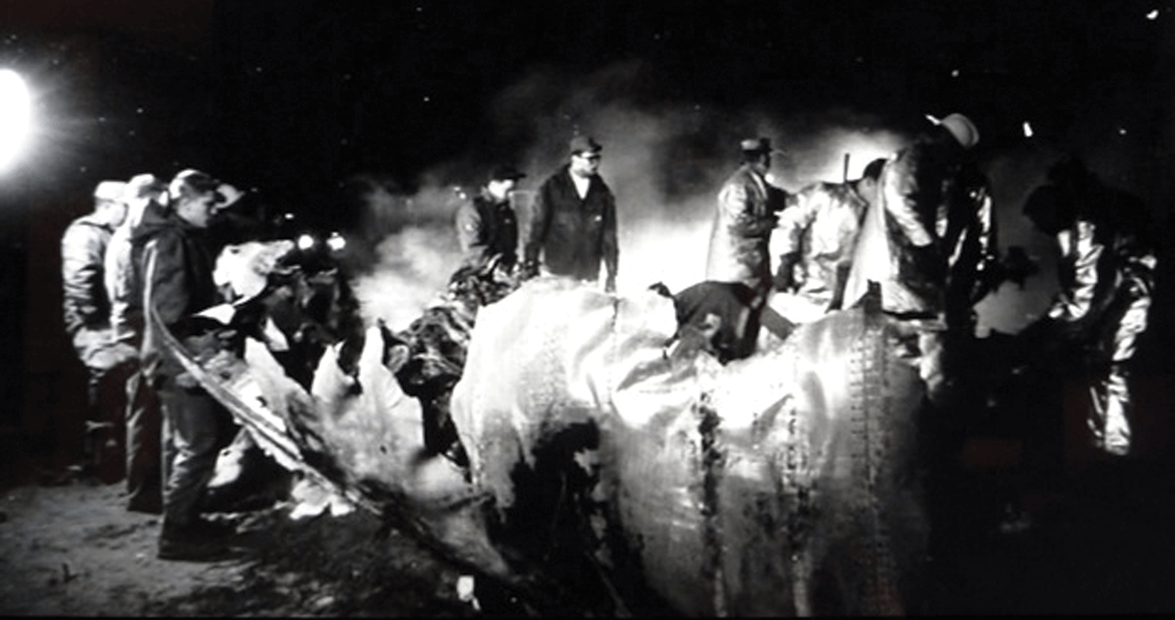 On January 24, 1961, blistering orange flames light up an inky sky in the early hours.

A B-52G jet carrying a crew of eight people and two hydrogen bombs disintegrates in midair over the small farming community of Faro in Wayne County. Before the explosion, the jet was in the air for 12 hours — only halfway through its routine mission over the Atlantic Seaboard — when without warning, it lost 19 tons of fuel pressure in just two minutes.

First Lt. Adam Mattocks is 27, a North Carolina A&T State University graduate, and the third pilot on the flight. It is a routine mission. The plane is part of a fleet of about a dozen bombers in the air, ready to defend the country against the Soviet Union as part of the strategic air command.

When the fuel pressure drops, near Raleigh, the pilots set out to try to land at Seymour Johnson Air Force Base in Goldsboro. The crew, including Mattocks, levels the jet off at 10,000 feet with a technique called “slow flight” that checks to see if the plane has enough fuel to land.

While the plane nosedives and spins to the earth, Mattocks unbuckles his seat belt. The pressure of the g-forces flings him 10 feet across the plane and pins him against the floor. He prays. Lord, if I go, take me home to heaven. The copilot opens his hatch and jumps out of the plane. The aircraft commander follows. Mattocks pulls himself off the floor and heads for the hatch. He plummets into the darkness and opens his parachute.

Newspapers interview witnesses who say the explosion looked like daylight, while others liken the spinning aircraft to a Roman candle. A farmer runs to his window and sees his field light up in fireballs. A woman drops to her knees and prays, certain Armageddon arrived. Another man thinks a plane crashed into his parents’ house. All he can see is fire.

The debris field lies north of Musgrave’s Crossroads, near Faro and Eureka.

Billy Reeves, who is 18 and lives outside of Faro, has just gone to bed when he hears a strange sound. His room lights up. He runs to the window. He sees a plane coming down, sputtering twice before it crashes to the ground.

Earl Lancaster, the assistant fire chief for the Faro Volunteer Fire Department, rushes to the scene in his fire truck. Everything burns. Within an hour, helicopters swarm the area, and Air Force officials urge everyone to evacuate. “They told us to git, and we got,” Lancaster tells the local paper.

Although five of the crew members parachute to safety, three men die. The body of 41-year-old Maj. Eugene Shelton, a radio navigator, is found two miles from the crash site, hanging from a tree by his red-and-white parachute.

The bodies of two others — Maj. Eugene Richards, an electronics weapons officer from Toccoa, Georgia; and Sgt. Francis Barnish of Greenfield, Massachusetts — are found in the nose of the plane. They worked in the tail.

Survivors believe the pilot, Maj. Walter Tulloch of San Diego, California, is also dead, but he appears just after dawn, walking out of the mucky swampland.

Meanwhile, someone spots one of the bombs, 11½ feet long, next to a tree near Reeves’s home. Five of the six arming devices have been activated.

Mattocks lands beside a farmhouse. He pulls off his mask and tells the family who he is; they drive him to the base. But he has no identification. The g-forces ripped his pockets off.

To the guards, he is simply a man improperly wearing a military uniform.

Officers detain him at the gate; he tries to explain. They won’t listen. Twenty minutes later, Tulloch, the pilot, arrives at the gate. He, too, has no identification.

Back at the crash site, concern centers on two things: The three dead men and the two MK39 thermonuclear devices — two-and-a-half-megaton bombs — that ejected from the jet as the aircraft blew apart. The bombs are 500 times more powerful than the bomb that devastated Hiroshima, Japan.

The parachuted bomb imbeds itself 18 inches into the ground next to Shackleford Road. It is deactivated without much trouble, loaded onto a truck, and taken to Texas to be analyzed.

The other bomb, though, burrows 50 feet into a swamp owned by C.T. Davis.

Joel Dobson, author of The Goldsboro Broken Arrow, writes later that the military didn’t tell the press the entire truth.

“In reality, only one of those things was true,” he writes. “There were two bombs.”

The Air Force digs in Davis’s swamp for the missing bomb. But after 20 feet, the hole begins to fill with water. Crews have 16 pumps; the men suck 20,000 gallons of water an hour out of the hole, but the water keeps coming.

The Air Force fills in the hole.

Parts of the bomb remain in the ground. 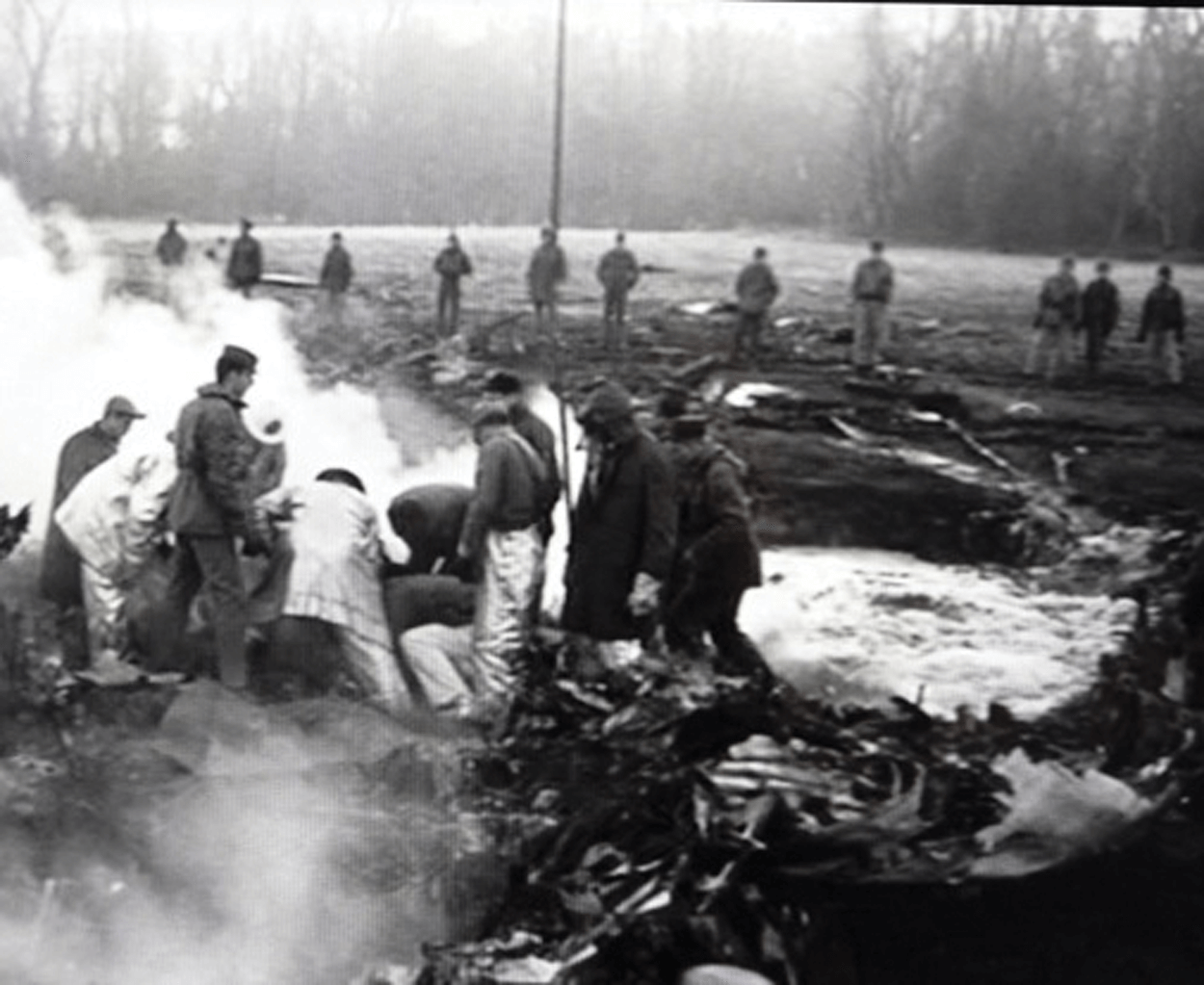 Workers pump water out of the swamp while they dig for the bomb, but the water is relentless. The men are unable to retrieve the entire bomb. photograph by Joel Dobson

A half-century later, the morning of January 24 is still vivid to Mattocks and everyone else associated with the events.

“It happened so fast,” says Mattocks, who is now 78 and lives near Jacksonville.

Says Reeves, the 18-year-old who was roused from bed by the explosion: “My room became red as fire,” he says.

The government still collects samples from wells near the crash. The military purchased an easement from Davis and his heirs for $1,000. The agreement says, “no current or future landowner may dig or drill deeper than five feet or ever use the land again in any manner other than growing crops, timber, or pastureland.”

The official account from the Pentagon states that there “was no hazard in the area” but that pieces of the bomb that crashed into the swamp broke off, and one of those pieces was never found.

Dr. Jack Revelle, the officer who deactivated the bombs at the site, says that if one of the bombs had gone off, our state wouldn’t be the same today.

“You might now have a very large Bay of North Carolina if that thing had gone off,” Revelle says.

Today, when people walk by the swamp on Davis’s land, they may never know that 50 years ago that same midnight sky lit up in flames and the people of Goldsboro thought the world had ended. 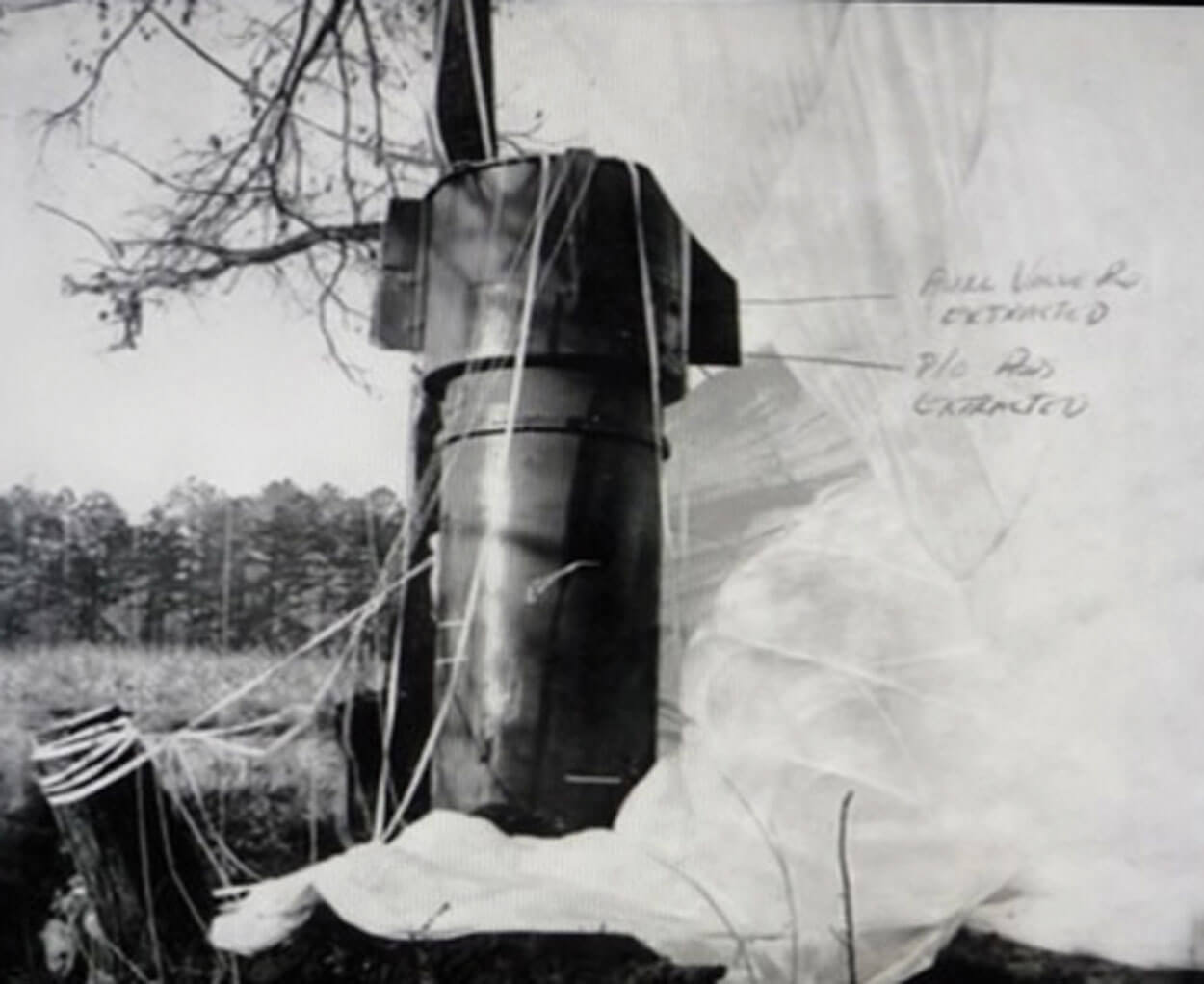 A passerby finds the first hydrogen bomb next to a tree. The bombs are 500 times more powerful than the one that destroyed Hiroshima, Japan. photograph by Joel Dobson

The Crash at Silver Hill

Just two months after the explosion in Goldsboro, another plane goes down in Denton.

A B-52G jet on a routine mission from Dow Air Force Base in Maine flies over Davidson County on March 30, 1961.

At about 9:15 p.m., as the pilot makes contact with a KC-135 jet tanker from Seymour Johnson Air Force Base near Goldsboro, the atomic bomber crashes four miles from the southern Davidson County town of Denton.

Giant balls of fire burst into the sky. The explosion shakes the ground for miles around the giant crater off Old Silver Hill Road. Windows of homes and businesses blow out. The wreckage scatters across a 10-mile radius as nearby woods and fields rage with fire.

Behind John Frank’s farm, a crater fills with green, red, and blue flames. You can see the plane’s wing descending from the hole, according to The High Point Enterprise. The jet engines lie smashed around the edge of the crater. The heat is so strong, a parachute, with its red-and-white nylon fused together, glues to the roots of the tree. The smell of gasoline and charred flesh fills the air. Fire explodes into the darkness.

The body of the pilot, Capt. William D. McMullen of Bad Axe, Michigan, is found dangling from his parachute in a tree a mile away.

The survivors bailed out of the jet at 50,000 feet and landed seven miles from the crash site.

At about midnight, military helicopters, searching for other survivors, begin hovering over treetops.

Hours later, as the sun begins to rise, more helicopters and four truckloads of troops arrive to help local law enforcement keep onlookers and souvenir seekers away from the area.

The Air Force states that the bomber did not have any nuclear warheads on board. Fifty-one years later, a crater still remains in the woods off Old Silver Hill Road. Neighbors still find shiny pieces of metal when they dig the ground — small reminders of what happened on that fiery night.