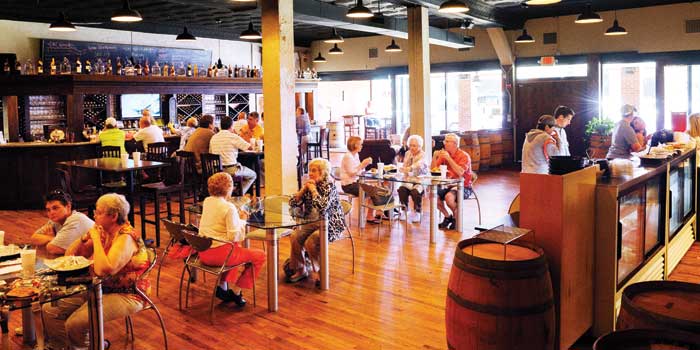 Winemakers are chemists. And chemists are scientists. And scientists have a reason for everything.

Ben Webb, the winemaker and co-owner of Old North State Winery & Brewery in Mount Airy, has a lot of reasons. He can tell you why some of his wines are sweet and some are dry; why his merlot complements a good steak; why he chose certain land to plant 10 acres of malbec and riesling grapes; and why, in his opinion, East Carolina University will win the conference in football this season. But he doesn’t have a reason for everything.

He can’t explain the footsteps he first heard walking upstairs when he was working late one night. He thought he was alone. And he can’t explain the reflection in a glass door of an old man with a white beard that showed up in a visitor’s photograph. That man wasn’t on the winery tour.

Ben and his wife and co-owner, Ellie, tried to make sense of these mysteries. They invited paranormal experts to their winery to try to understand. The experts told them they have a friendly ghost.

When the Webbs bought this building, they heard it came with a history. They heard about the dynamite explosion that blew off the front of the old general store in 1926. They heard that when Belk department store later reconstructed the building, workers found a skeletal arm in the basement. They heard the arm’s owner might still be around. And they have to admit — he has a good reason.

Ben and Ellie Webb dedicated a few of their wines to the spirit haunting their building. After all, he is friendly. The Restless Soul (red) and Bare Bones (white) wines have labels with skeletons that Ben designed. The Purple Haze wine, a tribute to the Webbs’ alma mater, ECU, also shows the mysterious skeletal arm serving a glass.