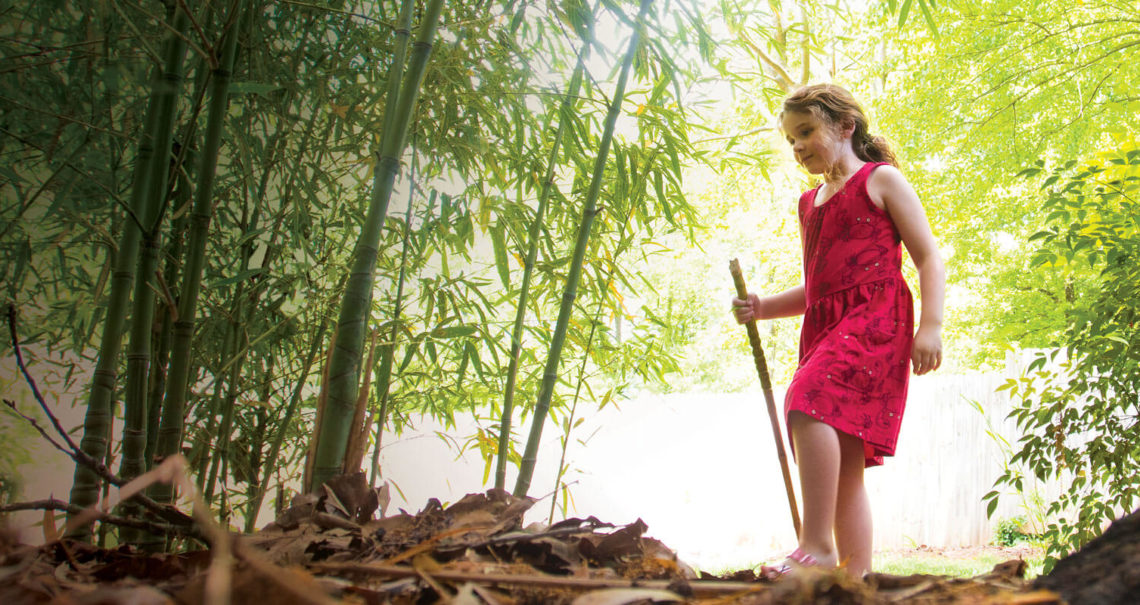 A mysterious world grows  in our backyard. Dark and seemingly impenetrable, with a jagged green canopy that shakes forebodingly when the wind blows. In the slightest breeze, it whispers, Shhhh. But from within, there’s a louder voice: “Come on, Dad! Come see Bamboo Rock!”

My daughter Oona is 6, and for the past several years, the bamboo forest in our backyard — a modest 50-foot-wide stand stretching between a pair of 100-foot-tall white oaks — has been her domain. At first, she was drawn to the piles of canes that I culled every winter. They were long and light; Oona was small and mighty. She wielded them like a little ninja gladiator with pigtails. With apologies to Shakespeare: She was fierce.

She was soon shimmying her way between the stalks to explore this strange place. And like the town crier for her little bamboo shire, she excitedly announced every discovery — every shoot, every stone, every caterpillar, ant, and spider. When she spotted a robin’s nest with a sparkling strand of plastic woven into it, you’d have thought she had stumbled on the lost ark. We were going to explain that the streamers on her tricycle were the source of that sparkly bit of plastic, but it would have dulled the luster of her find.

As she grew into a trailblazing kindergartner, she wore a path through her forest. This spring, my machete and I made sure the trail remained passable for Oona and her guests, both real and imaginary. I took out pointy branches at eye height, and she identified shoots that would impede her tours.

When she’s not showing off to her friends the “rooms” that we’ve carved out of her “castle,” she’s playing make-believe in those same “rooms,” explaining to her dog, Seamus, where he needs to lie while she serves him tea. Naturally, her dutiful liege obliges.

While Oona goes about creating her own characters and legends, actual folklore surrounding bamboo is rich and global. In the Philippines, a popular creation myth holds that humankind was born from a stalk of bamboo. In China, shoots are said to grow where a grief-stricken child’s tears once fell, which isn’t beyond the realm of imagination: There are times when the frustrations of being 6 overwhelm Oona, when the world is just too much, and she seeks refuge in the bamboo, finding solace in the cool and calm of the stalks. 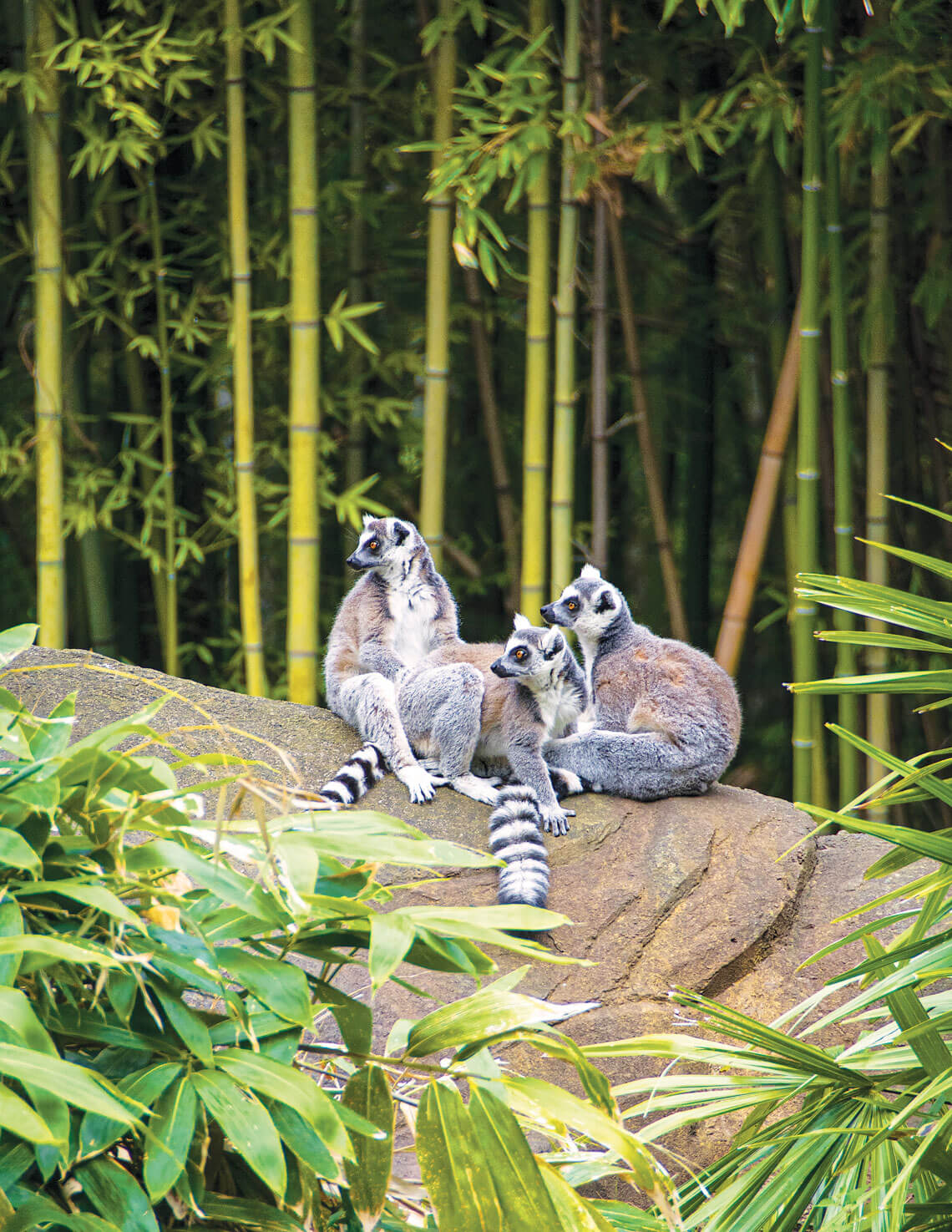 At the NC Zoo, ring-tailed lemurs enjoy bamboo as much as Oona does. Unlike Oona, though, they prefer to eat it. photograph by North Carolina Zoo

It’s possible that our bamboo predated our house being built and may have even been growing there before our town existed. There are more than 1,600 types of bamboo worldwide, mostly in Asia, but one genus — Arundinaria — thrives in North Carolina. And it’s the appropriately named Arundinaria gigantea — giant cane — that grows in our backyard.

I’d love to credit its presence between our oaks to the whims of Mother Nature. But based on the placement of several flowering shrubs within the grove, it looks like well-meaning landscapers back in the day strategically placed plots of bamboo here and there as a dramatic backdrop of vertical canes. Bless their hearts.

Don’t get me wrong, the bamboo creates a gorgeous screen at the back of our property. But it has a tendency to spread with little regard for the best of landscaping intentions or boundaries. And I’m not sure if our back-door neighbors share our enthusiasm for what is, to many, a pernicious invader. Good fences make good neighbors; bamboo does not.

Ours isn’t the only property where bamboo thrives, of course. It’s easy to spot legitimate forests of bamboo tucked away in forgotten corners of lots throughout our Asheboro neighborhood — and across the state, for that matter.

Walking through that bamboo tunnel, she soaks in the relative enormity of nature.

One of Oona’s favorite places to visit is the North Carolina Zoo, with its acres of bamboo. Like other kids, she’s captivated by the lions and polar bears, and would love nothing more than to cuddle with the river otters and chimps. But she seems to be most in her element on the path to the aviary, where 30-foot-tall stalks of black bamboo create a cathedral. Walking through that tunnel with walls of thick bamboo bowing overhead, she stretches out her arms, filling the void as best she can, soaking in the relative enormity of nature.

Walking among the exhibits, Oona is dwarfed by the yellow and golden varieties that grow even taller than the black bamboo. And then there’s the 100-foot-tall timber bamboo by the lemur exhibit that transports Oona from the heart of North Carolina to the heart of Madagascar.

Maybe she’ll add botanist or landscaper or lumberjill to her what-I’m-going-to-be-when-I-grow-up list, which currently consists of ballerina and lifeguard and veterinarian. And why not? After all, she’s Oona, and this is her world.