Editor’s note: This story was originally published in December 2020.

At Christmas in Davidson, Lovie, a black cocker spaniel dressed in an Elf on the Shelf costume, takes her job seriously. When folks walk up to her gingerbread house to ask where to find Santa or s’mores, Lovie’s cuteness quickly distracts them into a petting frenzy. She doesn’t mind, but if you’re another dog, you’d better back off because this is her gig. After Lovie’s welcome, her human, Julie Jones, who has worked the event’s gingerbread house information booth for 15 years, steps in to direct guests to the various bastions of holiday cheer. Think Victorian carolers, horse-drawn carriages, and a live Nativity, complete with an alpaca and a llama.

For the past 32 holiday seasons, this three-day festival has taken place during the first weekend of December in the cozy college town a little more than 20 miles north of Charlotte. But this year, due to the Covid-19 pandemic, Christmas in Davidson will take on a different shape and size: Organizers have reimagined the huge holiday tradition as something smaller and safer. 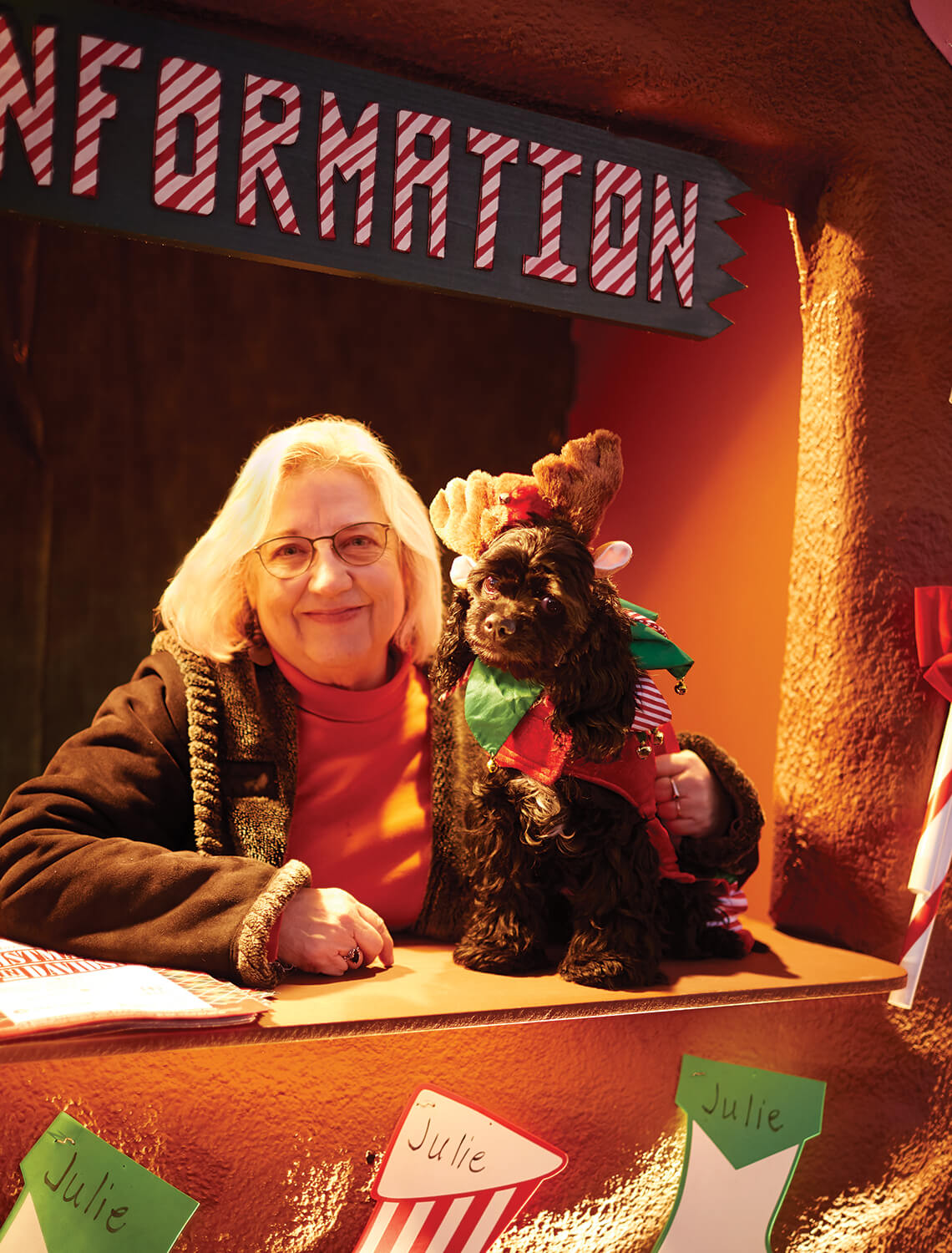 Julie Jones has worked Christmas in Davidson’s gingerbread information booth for years. But her cocker spaniel, Lovie, is the main attraction. photograph by Stacey Van Berkel

Instead of preparing for big crowds that require trolley transport from satellite parking lots, the town is stretching its holiday cheer into a new format. No worries, though: Davidson’s tall Norway spruce will still be lit on December 1, and the streets will still be decorated like a Hallmark Christmas movie, with glowing luminaries and piped-in Christmas music. But the traditional three-day event will run much longer this year: From December 1 through December 12, the old Christmas in Davidson will become The 12 Days of Christmas in Davidson. Rather than staged performances, there will be a drive-in Christmas movie and roving entertainment, including a man dressed as a nutcracker on stilts (social distancing vertically) and Steve Langley, The Bubble Man, blowing soapy, snowflake-shaped bubbles. As for the 50 vendor booths that normally take up residence on The Village Green? They will be replaced with social media contests.

“We want to support our local businesses in a safe way,” says Kim Fleming, who, as economic development manager for Davidson, usually begins planning the holiday event in July. Fleming says that social distancing and face masks will be required for the event this season. Yet, aside from the masks, she says, “this is more of a return to how Christmas in Davidson started.”

The original Christmas in Davidson was the brainchild of the late Irene Blackwell, who owned The Village Store on Main Street with her late husband, Taylor. Back in 1988, Irene thought it would be a good idea for the town’s stores to stay open later for a few nights during the holidays so folks could finish their shopping. Little did anyone know that this modest last-minute shopping spree would grow into a festival that, by last year, attracted 30,000 attendees and more than 1,000 volunteers.

“This is more of a return to how Christmas in Davidson started.”

Over the years, the town has kept the traditional elements that people love about the event. For instance, children could always count on visits with Santa at Davidson College Presbyterian Church, as well as story time and cookies with Mrs. Claus at a local real-estate office. Couples could enjoy a romantic evening with a horse-drawn carriage ride and shopping at The Village Store, now owned by Irene’s son, Greg, and his wife, Megan.

As the event grew, so did its offerings. A couple of Christmases ago, a snow globe big enough for kids to frolic in was added, along with a carousel and a selfie booth housed in a decked-out vintage Volkswagen van. Businesses, churches, local artisans, schools, and nonprofits have all had a hand in the evolution of the beloved Davidson event, and in 2020, it will evolve once again.

So, no, the food court that normally sets up in the lot beside Summit Coffee won’t be there this year, which means that Marcus Rivens won’t be grilling turkey legs for Davidson Presbyterian Church. The church has been setting up a white tent in the corner of the food court since anyone can remember, and its turkey legs, chicken wings, and sausage dogs are legendary. The church sold out of turkey legs on the first night of Christmas in Davidson last year. 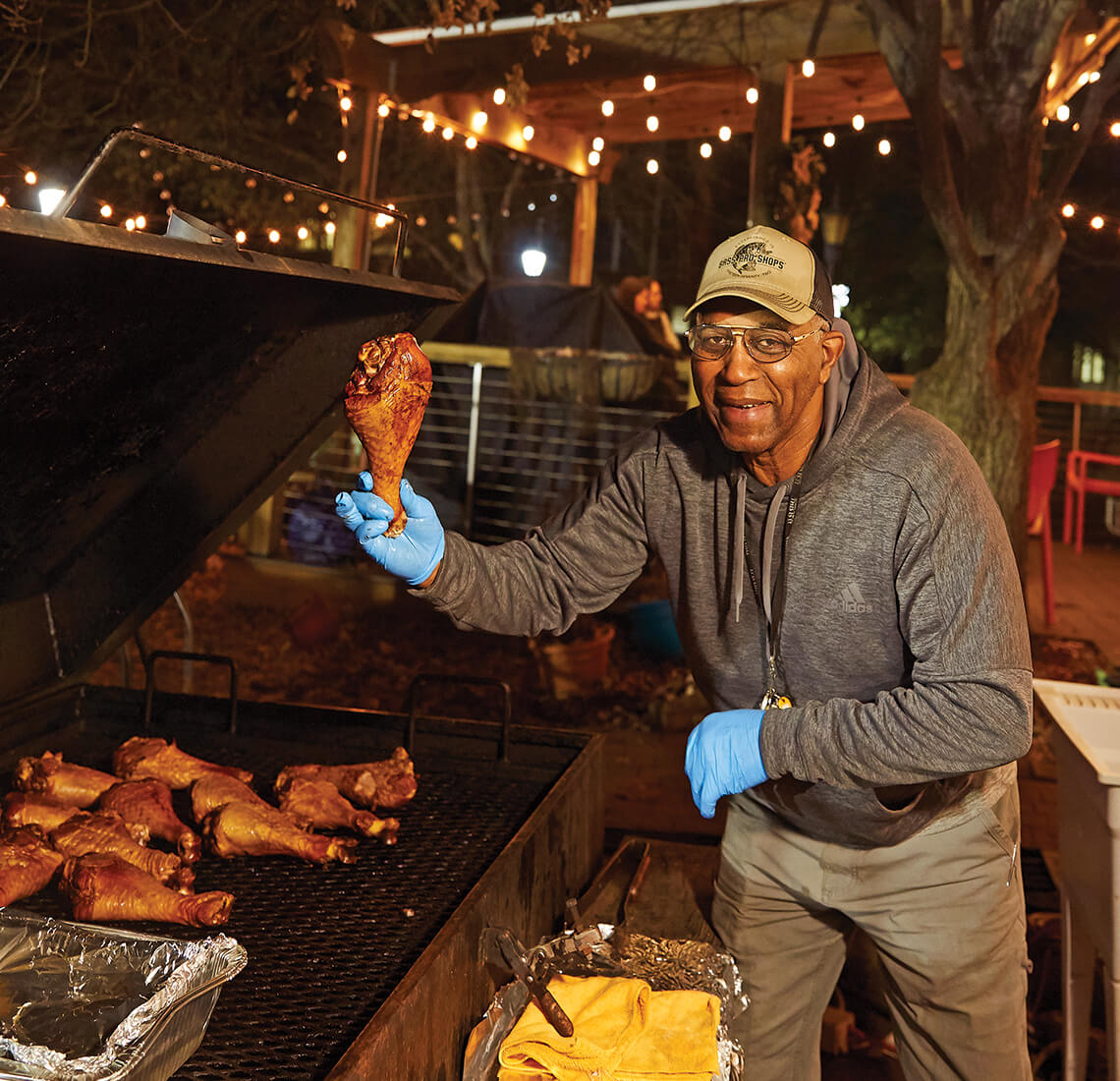 Also missing this year will be the s’mores, and the lessons that Davidson’s Cub Scout Pack 58 always offered on the art of roasting marshmallows. But there are some old-fashioned holiday traditions — like homemade decorations hanging from the limbs of freshly cut trees — that the coronavirus won’t be taking away from Davidson this year.

While many folks watch football games on the Saturday after Thanksgiving, members of The Rotary Club of Davidson get busy putting out Fraser firs from the North Carolina mountains to create Christmas in Davidson’s Giving Tree Village. Local businesses sponsor each tree, while nonprofits partner with those businesses to decorate the trees in fun themes. In the past, attendees voted on their favorites by paying for a ticket to put in a bucket next to the tree of their choice. This year, during the first 12 days of December, folks will be able to vote by scanning a QR code.

The Rotary Club launched Giving Tree Village in 2013 with 15 trees. Last year, the club raised more than $30,000 for charity and had 62 trees, including one that was decorated like a huge monarch butterfly for Davidson Lands Conservancy and another that was laden with little pink houses promoting Build for the Cure, a fund-raiser for Susan G. Komen Charlotte. It’s that kind of creativity, imagination, and dedication that grace the branches of each tree every year — and that won’t change this year. People don’t mind taking the time to make these trees special because they know how much they mean to the community. And this season, as the world reels from a year like no other, Giving Tree Village should bring even more joy. 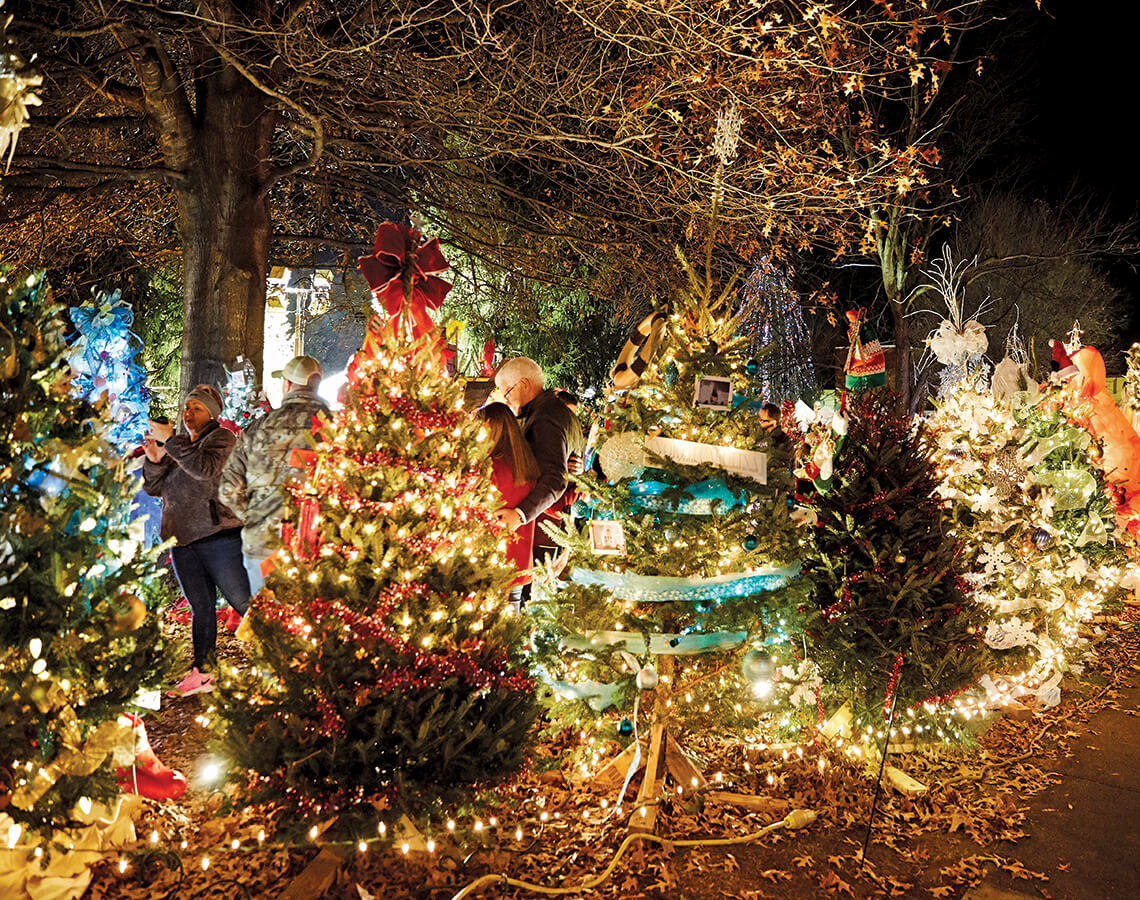 The highlight of Christmas in Davidson, this season as well as seasons past, is the bright and colorful Giving Tree Village, a fund-raiser for local nonprofit organizations. photograph by Stacey Van Berkel

That same commitment to holiday happiness will be apparent in other events during this year’s 12 Days of Christmas in Davidson. Like the Ugly Sweater Contest: With a $100 cash prize, a trophy, and, most important, bragging rights, this competition brings out some of the tackiest togs you could imagine. Contestants are mostly kids and teens, and the lineup always includes Helga Mintz and her granddaughter Lexia Gianopoulos, both from nearby Mooresville. Pinned to Lexia’s red cardigan last December were little ugly sweaters that she’d collected from wine bottles over the years. “We do it just to be goofy,” says Helga, who opted for a Grinch motif with a fur-trimmed chartreuse wrap featuring a depiction of Whoville topped off with flashing lights. “We’d been wanting to do the Grinch for a while.” Despite their efforts, first place went to Davidson sixth grader Finn Steen, who embraced an irony theme by not wearing a Christmas sweater at all.

This year, the contest will still be held on The Village Green, but the audience will watch via Facebook Live. Regardless, you can bet that Helga and Lexia will come up with another innovative way to model their holiday spirit. After all, they have a reputation to maintain, Covid or not.

Sadly, Lovie, the cocker spaniel that’s usually stationed at the gingerbread house, won’t be working her post this December, but she’ll likely be tuned in on Facebook Live for her favorite attraction at Christmas in Davidson: the Doggie Fashion Show. The furry fashionistas will strut their stuff on The Village Green, where local dance schools, bands, and choruses would normally perform holiday numbers. Hosted by local veterinarian Dick Hay, the Doggie Fashion Show began 30 years ago and has something of a cult following.

Standing tall in his red fleece vest and Santa hat, Hay received the applause normally reserved for a rock star as he took the stage last year. He proceeded to tell corny dog jokes that only a vet could get away with. (What do you get when you cross a cocker spaniel with a rooster? A cockapoodledoo.) For her part, Lovie thinks that Hay is a riot, and she’s confident that she would bring down the house if she ever participated. 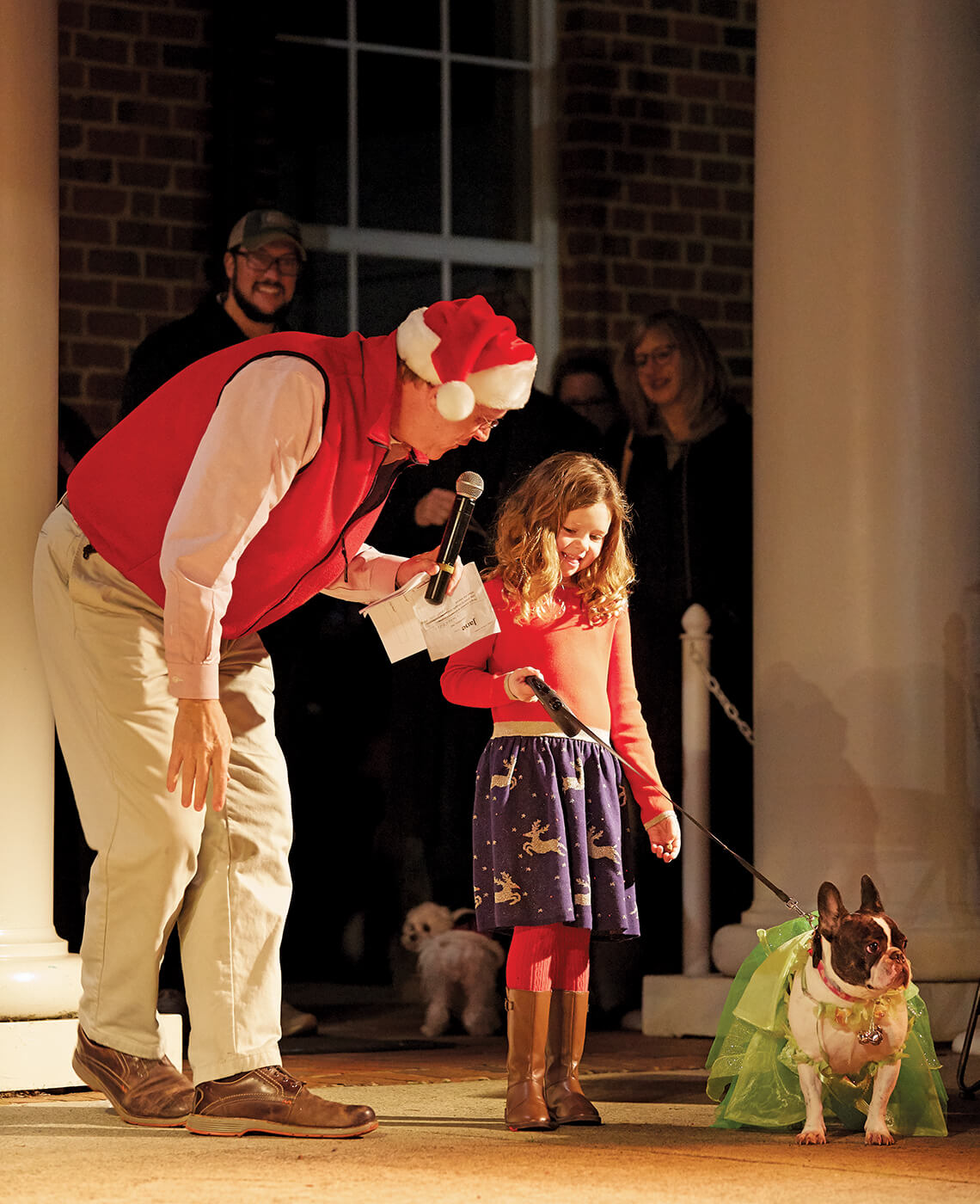 Who says a Frenchie can’t wear a tutu? Certainly not local veterinarian Dick Hay, the emcee of Christmas in Davidson’s Doggie Fashion Show, a 30-year tradition at the event. photograph by Stacey Van Berkel

Most of the dogs wore cute Christmas sweaters last year, but occasionally, an owner thought outside the (gift) box. One rescue dog was dressed like a Salvation Army volunteer. There were no winners in the show, as all of the participating dogs receive treat bags. And the same will be true this year. “We wanted to honor parts of the festival’s history, the Doggie Fashion Show, while providing an event that adheres to all health and safety protocols,” says economic development manager Fleming.

It’s nice to have a little familiarity in a year full of so much that’s different. With all of the cancellations in 2020, many people assumed that Christmas in Davidson wouldn’t happen this year. But just as the citizens of Whoville made the best of Christmas morning without all of the trimmings, the Town of Davidson has fashioned a safe and festive way to celebrate the season they hold dear. As for Lovie, she’s excited to have a year off so she can finally enjoy watching the festivities from the comfort of her home.