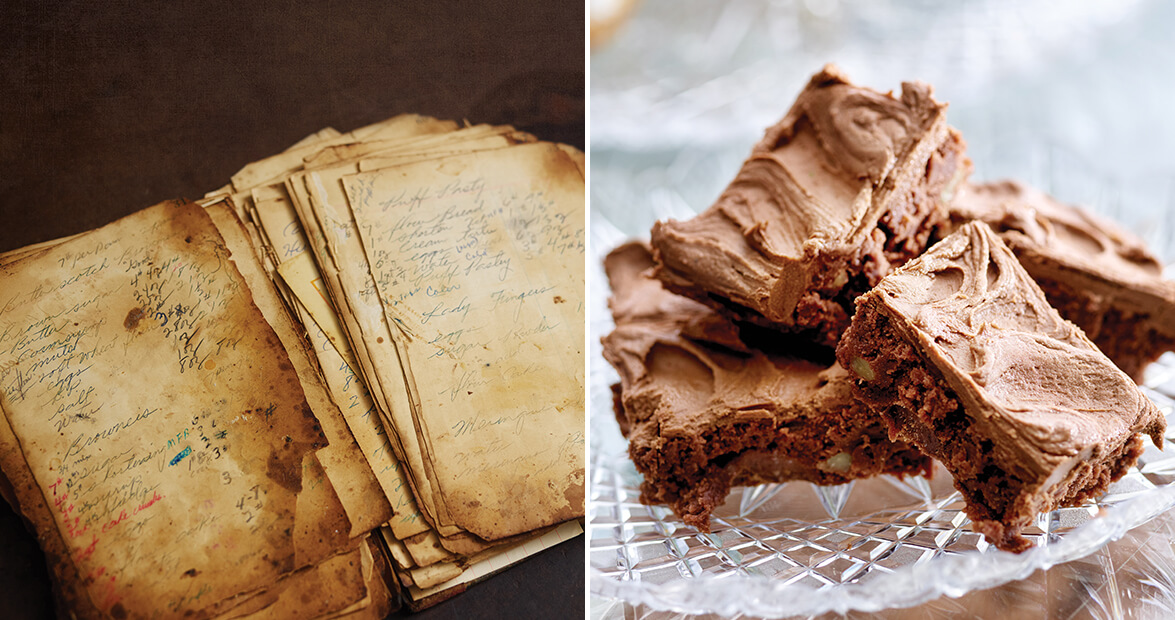 The recipe book in Pam Kinney’s hands is decades older than she is. Its binding is broken and fraying. Its pages, brittle and yellowed and bruised. She keeps it in a safe and handles it gingerly, as if it might shatter like an egg, or break like a heart.

“He was a good ol’ fellow,” she says. “And with distinctive handwriting!”

She flips to a recipe for butterscotch brownies. Just before the ingredients, there is a one-word annotation: “Good.”

Kinney started working for the journal’s author, Victor Burns, when she was 14 years old. Burns, a Navy veteran, bought Central Bakery in 1947 with his business partner Odell Calhoun. An entrepreneur named Herman Bell had established the shop just a couple of years before.

Kinney was drawn to the bakery for the same reason she has stayed for 35 years: “It’s just a happy place.” She started by sweeping floors and steadily worked her way up the ranks, from manning the register to decorating cakes to, eventually, buying the business in 1995, when she was just 27. 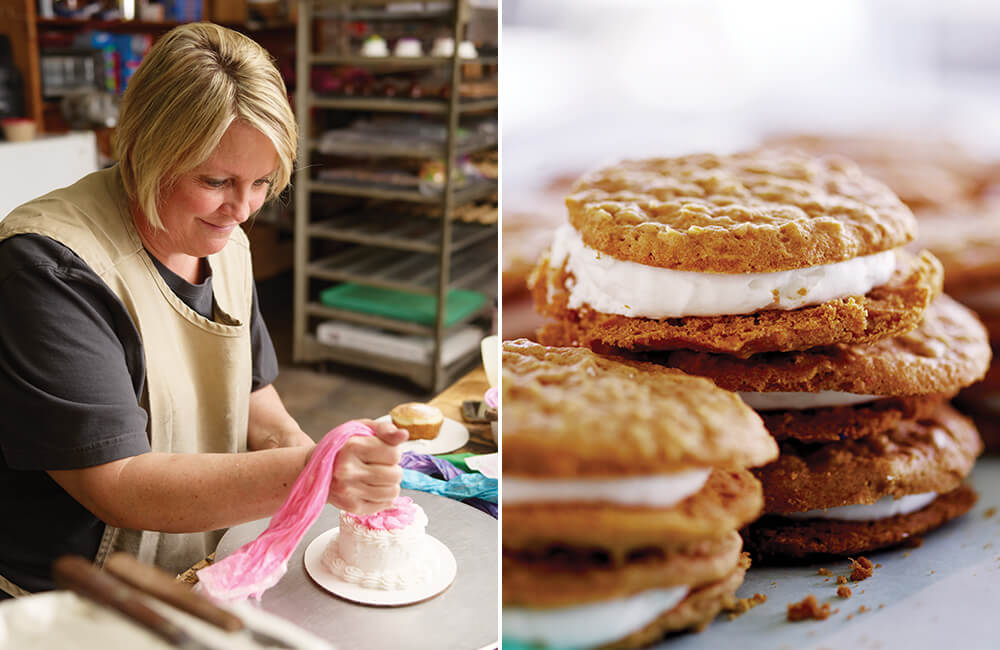 Pam Kinney ices as many as 300 cakes each day; oatmeal cream pies are a Central Bakery specialty. photograph by Joey Seawell

While the front of the shop is petite, with cherry pie wallpaper and a few seats, the kitchen is vast. On one workbench, there are dozens of piping bags filled with a rainbow of frostings: fuchsia and lavender, teal and tangerine.

Now, Kinney bakes every day with her husband, and, every so often, with her sister, brother, and children, too.

“It’s never been family until me,” she says.

Still, most of Central Bakery remains unchanged: The pastry cases filled with customer favorites like oatmeal cream pies and cinnamon twists. The location. The oven. And even the larger-than-life Hobart mixers, nearly as tall as Kinney herself.

“I’ve been working here since I was 13,” Ken Cagle Jr. says. “I could barely see over the counter, but I was helping customers.”

He is the third generation at The Sweet Shoppe Bakery in High Point. His grandfather, the late Jim Sloop, opened the shop with his sister in 1946, after returning home from serving in the war.

“At the time, because of the rations, sweets were one of the things that everybody was craving,” Cagle Jr. says. 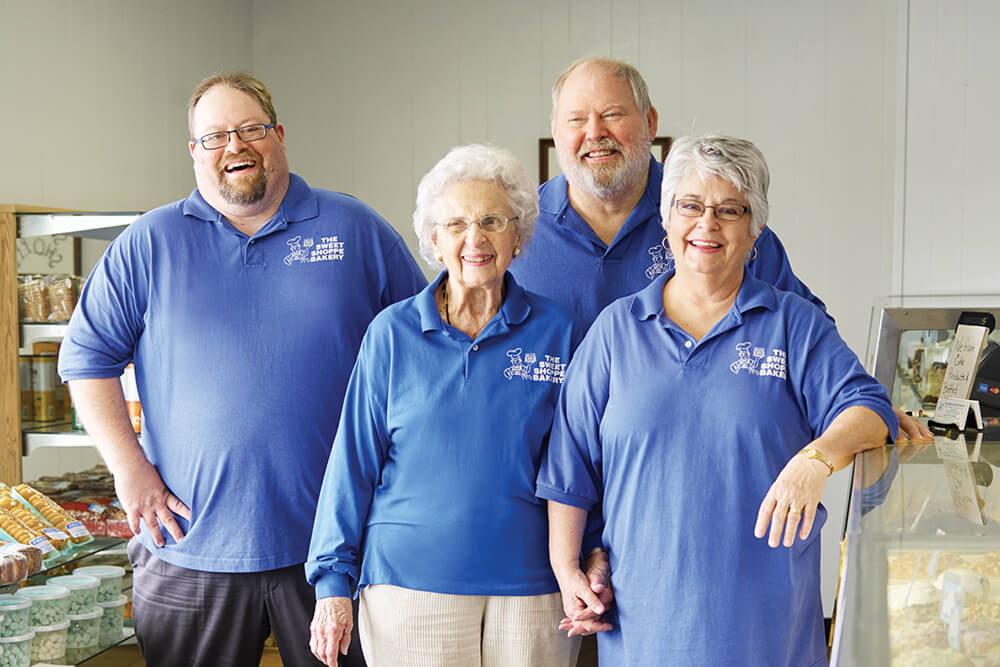 Originally, The Sweet Shoppe specialized in yeast-raised, glazed doughnuts, inspired by a bakery that Sloop encountered in Kansas City, Kansas. “It just struck a chord with him,” Cagle Jr. says. “And back in the ’40s, if someone could get a glazed doughnut, they were happy as a lark. So that was what he made.”

Today, The Sweet Shoppe — which moved to its current location half a century ago — bakes a lot more than just doughnuts. Cagle Jr. works with his parents and grandmother (she’s 96, but still comes in a few days a week) to make cinnamon buns, fruit pies, and from-scratch puff pastry for their cinnamon sticks. But what they’re known for, Cagle Jr. says, is their buttercream: “We sell cups of icing. Or, people will just come in and buy it by the pound.”

And, just like that, they’re as happy as a lark.

The late Mickey McClenny, his son-in-law Jerry Ray, and his granddaughter Melanie Daniels are the first family in the country to have three generations of Certified Master Bakers. To earn the title, you need to log eight years of professional experience, and pass a written test and a practical exam that lasts two days. The experience part, at least, was easy for them — Mickey’s has been in business for more than 70 years.

McClenny’s career really began, however, during the Great Depression, when he dropped out of school and started working for a local candymaker to support his mother and siblings. This experience proved invaluable in the U.S. Army Air Corps, where he served as a pastry cook, and even more so when he returned home with a sugar ration and opened the bakery in 1946. 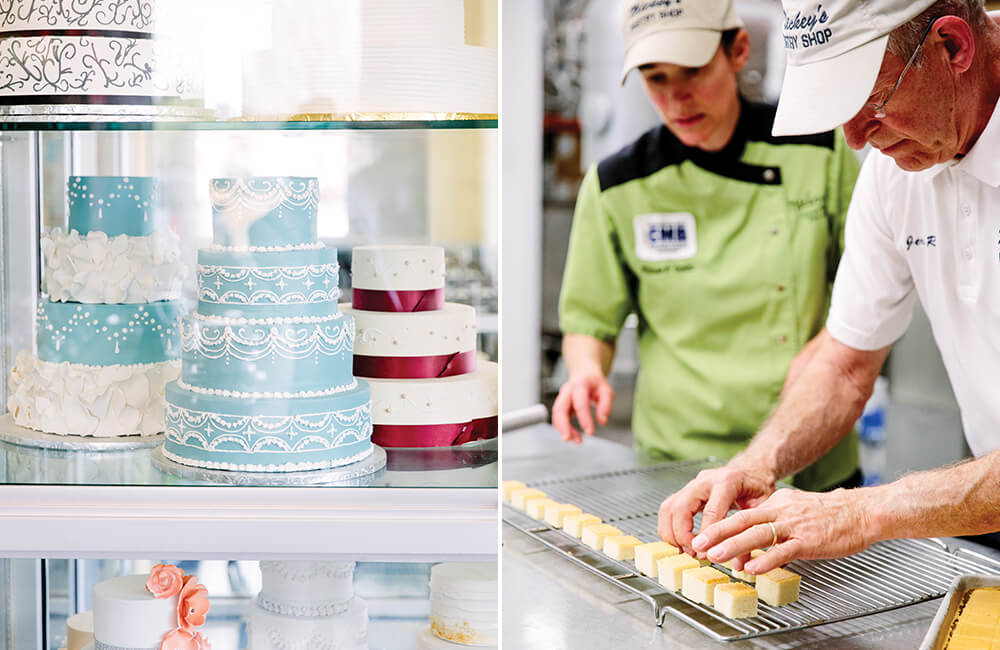 Today, a black-and-white photo of those early days hangs in the bakery, beside a few crinkled recipe cards for oatmeal shortbread and cherry cookies. Though the family tree and location have changed, the menu and even the equipment — from workbenches to cookie cutters — have stayed the same.

“We’re not a trendy bakery. That’s not what our people want,” Daniels says. “They want tradition.”

Daniels, who now runs the business with her dad and brother, bakes six days a week. When she arrives, the sky is still inky — but, on the bright side, she’s not alone. Her 9-year-old daughter, Marianna, tags along before school. She likes to help in the bakery — and loves to snack on the bran muffins, too.

“Marianna is a great helper,” Daniels says with a big smile as she turns to her daughter. “Are you going to be a baker?” she asks.

Marianna nods, shyly and quietly — but with no hesitation — before she scurries into the kitchen.