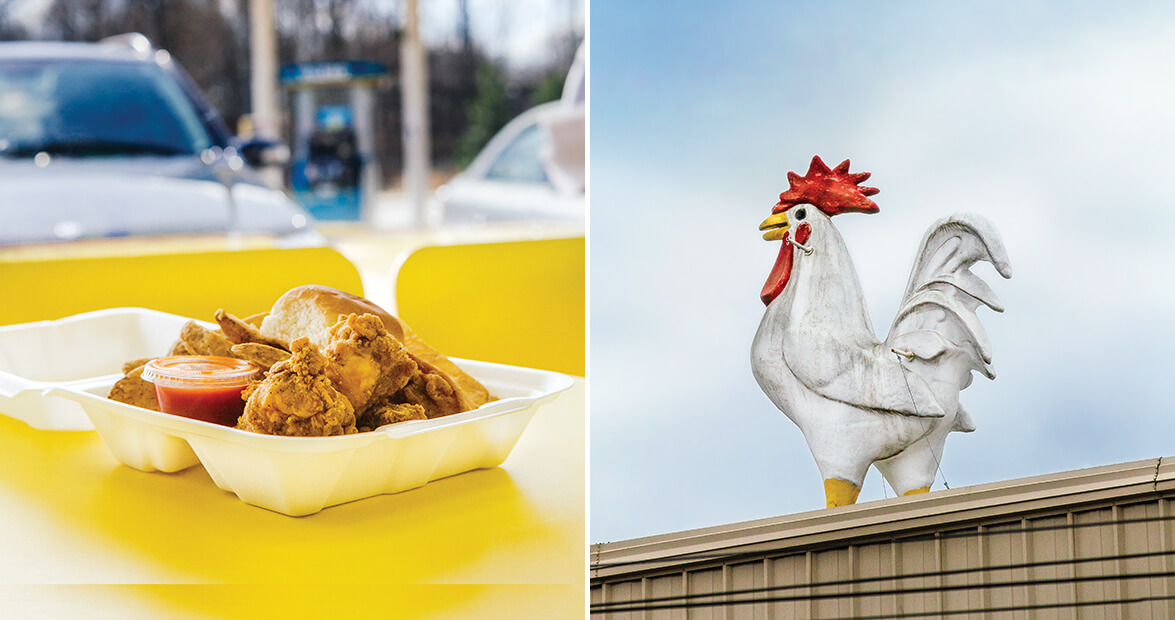 You could, if you were of a mind to, set out on a pilgrimage of sorts. You could do it in a day, even. You’d want to maybe take it easy on eating the day before. You’d want to medicate in real time with ice water and hot coffee. You’d want a weekend day with the sun hanging bright and clear in the North Carolina sky. You’d want ambition coupled with a near-religious fervor. And you’d need — not just want, mind you — to believe.

It was my wife who told me — she used to be a vegetarian, of all things — that gas stations serve the best fried chicken. And though nearly everything else she’s ever told me has turned out to be true (about having kids: correct; about how to fold a fitted sheet: correct; about actually feeling my feelings: whatever), this I could not believe. Better chicken than a meat-and-three? Than a stand-alone local joint? Better than some straight-up family-style restaurant snugged into a shopping center somewhere? A gas station? Really? Like the kind with gasoline? And: How would she even know?

She’d been mostly vegetarian, she told me. With one weak spot.

If you live in the central part of the state, as I do, you’d first want to get on the phone and ask: “When do y’all start serving chicken?” At Pantry Fried No. 1 in High Point, it’s usually 9:30 or 10 a.m. The woman on the phone at the Dilworth Quik Shoppe in Charlotte laughs at me: “Oh, sweetie,” she says. “We serve 24 hours a day.” After those two, you’ll be pushing noon, so the stops as you loop back north — at B&B Royal in Hildebran, just past Hickory, and Betty’s Dollar Mart, in Sparta — aren’t really much of an issue. The big question: Can you hit all four without falling into some deep-fried coma?

Only one way to find out. 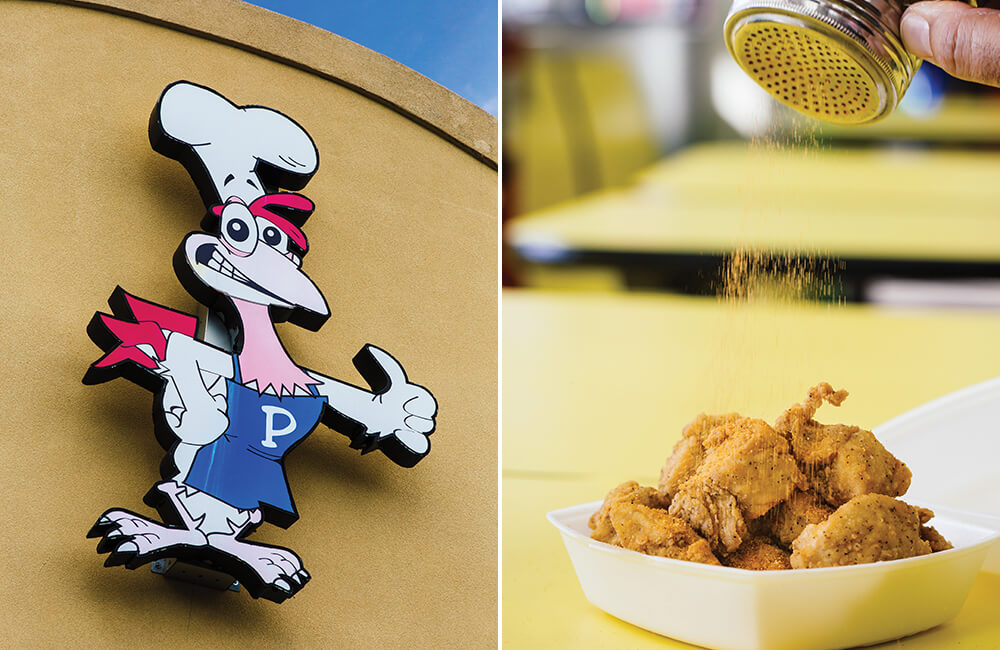 Of course the boneless wings at Pantry Fried No. 1 are worthy of their own “best of” award. Would a cartoon chicken mascot in an apron and chef’s hat lead you astray? photograph by Tim Robison

Pantry Fried Chicken, Assaad Khoury tells me, after I call him to ask about his proprietary spice mix, is what happened to his chain of service stations after margins started shrinking. “Nobody makes money on gasoline,” he says, which is a surprise to me. The real profit, Khoury explains, is inside the store. So he spent about a year experimenting with recipes, getting things just right, and now, he tells me, even the breading is proprietary. That’s right, his vendor makes him Pantry Fried Chicken breading. “Our name is right on the bag,” he says.

And it should be: I have to wait when I walk in — a batch of chicken is still roiling away in the massive deep-fryer along the back wall — so I try some of the boneless wings that are so good, the folks who run the local “best of” awards invented an entirely new wing category for them.

The man working the counter, who wants no part of a magazine story, hands me wings and a stainless steel shaker about the size of a coffee mug, holes punched in the top. The seasoning is something between spicy and warm, a little salty, and a lot like being really, really satisfied. And when the chicken comes out? Drumsticks the size of my head. Plus an order of fried okra and some rolls, all boxed into white Styrofoam with the price ball-point-penned into the top. 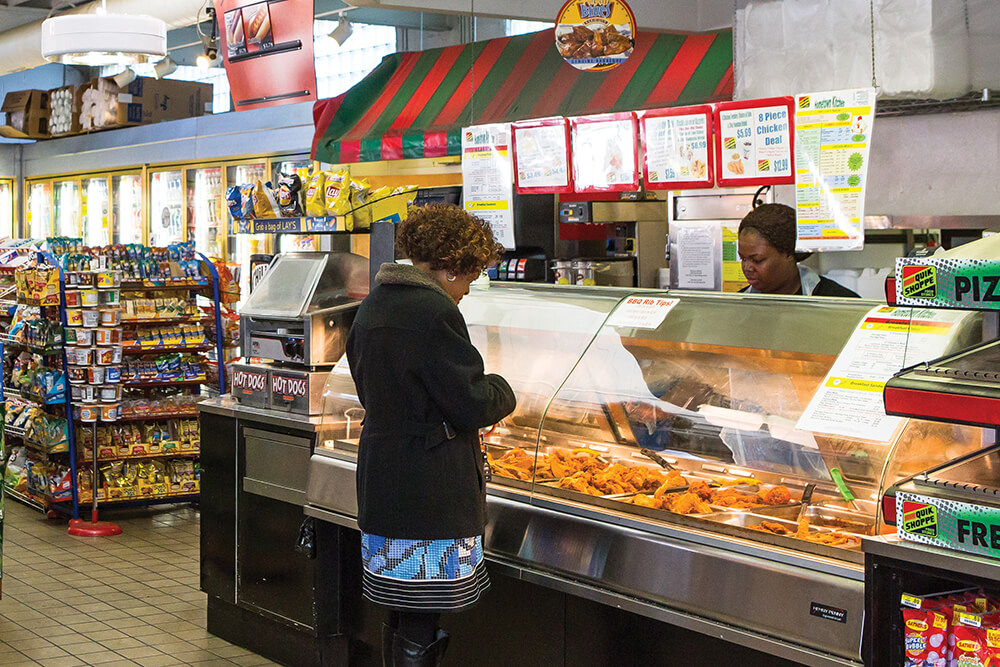 The smell of fresh fried chicken is like a magnet inside the Dilworth Quik Shoppe in Charlotte. photograph by Tim Robison

I sit in a yellow booth in the store, surrounded by lottery tickets and antifreeze and candy bars. I take a bite. I burn my mouth, keep right on going anyway.

The Charlotte Quik Shoppes are famous, a hit with both the “in crowd” and the “we-were-already-here” crowd. I confess: Standing in line for this chicken makes me excited in a way that waiting in line rarely has. Already the day is turning out to be rinsed in a kind of splendor. A murmur runs up and down the queue as a square pan of mac and cheese comes out, then green beans. This setup is the most robust of the day, features the most vegetables, but I aim for the drumsticks again.

The whole thing was deeply disorienting: What new world is this?

I’m a loner at heart, and I read pre-pilgrimage that there was no shame in Charlotte in eating in your car, which is what I do. That way, I might wipe my chin in what I can pretend is privacy. Also, I can close my eyes. Let’s call it joy. Let’s say that in my regular life I don’t eat a lot of fried chicken, and certainly not twice a day. I sit in my parking space in front of the unmarked white building while all around people fill up in ways both actual and metaphorical, and I think: When I check in with Bobby Spivey, the son of the man who founded this chicken-and-gasoline empire 40 years ago, I’ll try not to cry.

Spivey laughs when I reach him. “Yeah,” he says. “It didn’t take us long to realize that our chicken made folks awfully happy.” They bring it in fresh and local six days a week, and “there’s no secret past the brine.” I know better than to ask. Or at least, by the end of my journey, I’ll learn.

I get that one highway is give or take another, but U.S. Highway 321 from Gastonia to Hickory is a road filled with promise, with hills as you rise up off the Piedmont, and with enough miles to let your body settle into the profligate, Dionysian thing you’re letting it do: eat like you’re 16 again. It’s a little more than an hour, maybe two CDs, and a huge bottle of water to the B&B Royal in Hildebran, which is such a lovely example of the species: unassuming, set into a little strip of shops behind some gas pumps, with a lit sign above the glass doors. 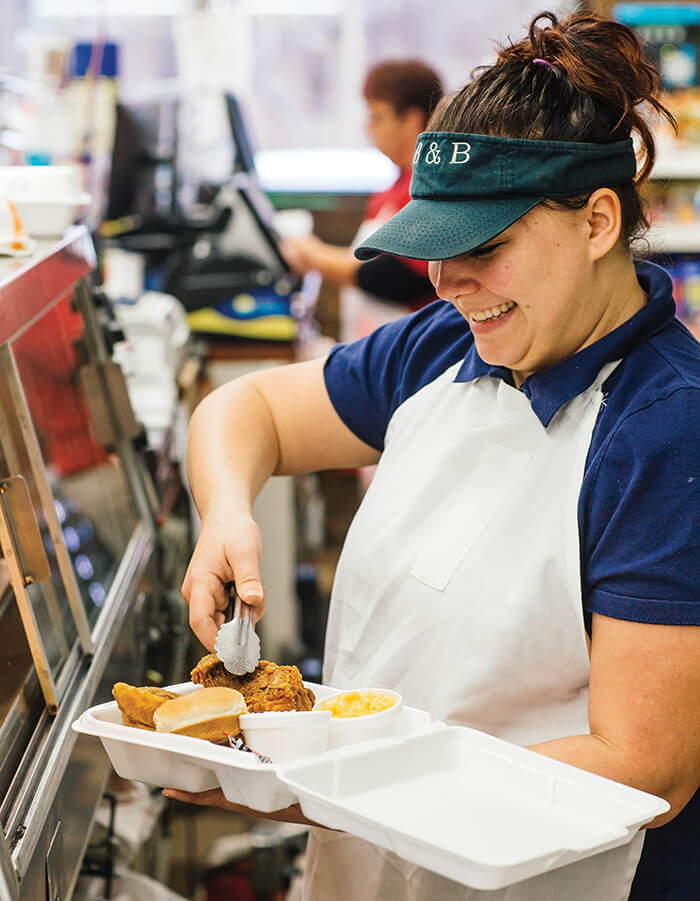 At B&B Royal, frying chicken is a family affair: Hannah Evans is the granddaughter of the store’s manager, Roxanna Huffman. photograph by Tim Robison

I want to sing to you of the tater. Of the potato cut into thick curved wedges, longways, gently breaded and always deep-fried, piled high in the glass case alongside chicken quarters and catfish and corndogs, depending. The B&B Royal tater? Crispy at the edges, pillowy on the tooth. Good with ketchup. But better on its own. “Been here 24 years,” Roxanna Huffman tells me. She’s the store manager. “All day, every day. We’re closed on Christmas. This is the same chicken, same taters we’ve served all along. It’s too good to change.”

In the parking lot, looking up at the sun chasing west, I feel like a man on a mission. Like I need some theme music. Like not many days are better than this. I check in with my wife once more, tell her maybe I won’t be home. You better, she says. And you better bring me some.

Betty’s Dollar Mart in Sparta is, perhaps, the mothership, big blue awnings out front with FRIED CHICKEN in yardstick-size white letters running along one side. Inside, the store’s namesake, Betty Church, is working the counter. She knows everyone, which has been my experience all day: I’ve been the only stranger everywhere I’ve been, and even then, only for a minute or two. I order simply: chicken, taters. The man in front of me in line buys lunch and $10 of gas, and goes on at length about what seems like a pretty good idea for a portable smoker that can hold a deer and a half. “Where do you get half a deer?” I ask him and, just like that, we’re neighbors. 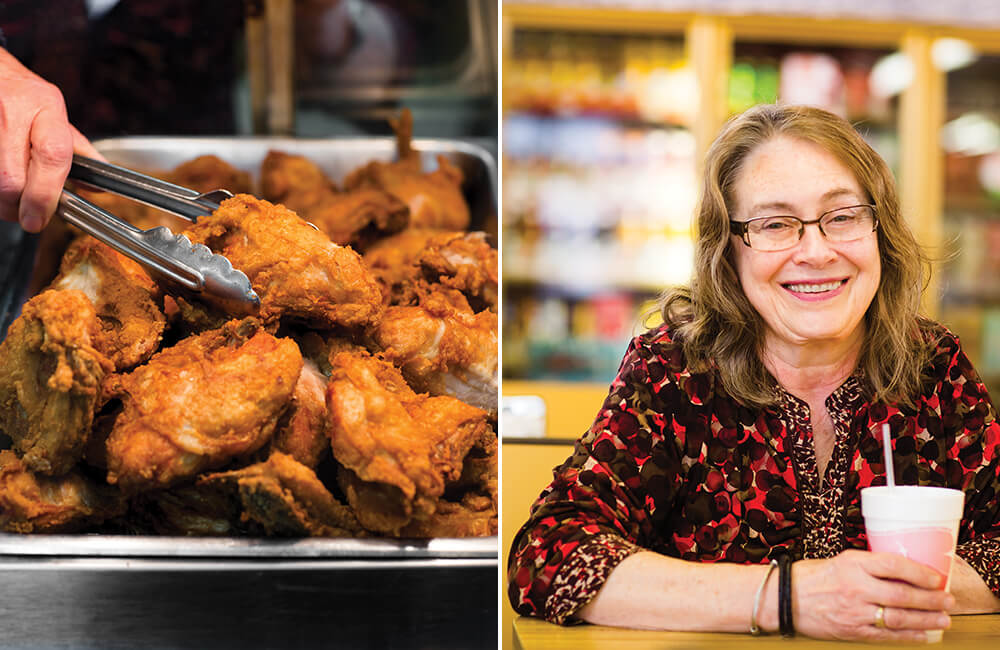 In Sparta, just about everyone knows Betty Church, and her chicken. photograph by Tim Robison

“What don’t I know about serving fried chicken?” I ask Betty. She smiles and says, “Honey, just make sure it’s cooked.” “What’s in your breading?” I ask, and she tells me, and I start to write it down, and she all but slaps my hand: “Don’t tell everybody what we use!” “I’m sorry,” I say, and I am — I’ve given myself away again, a pilgrim instead of a local, but I’m quickly forgiven, and we talk about how, on any given Sunday, local churches sometimes order as many as 130 pieces, and about how she’s got a girl who makes the fudge they sell by the register.

Don’t ask people how they do it, I learn. Or even why. You already know the answers: They cook as best they can, and because folks like it. Driving home in the onrushing dark, as full as I’ve ever been after any holiday meal, I’m happy. Content. There’s good food, real food, in my belly, and a little more in a bag beside me. It’s my ticket to get back in my own front door — a gift for my wife, who was so, so right, yet again.

I’ve been to the gas stations. The hubs of these small towns, these not-so-small towns. The places where folks know who you are and are glad to see you again. Where they’re ready to box up a little chicken for you to take home, or just eat right there. “We didn’t know anything about it when we started,” Bobby Spivey told me. None of them did, it seems. But they’d grown up around it. We all have.