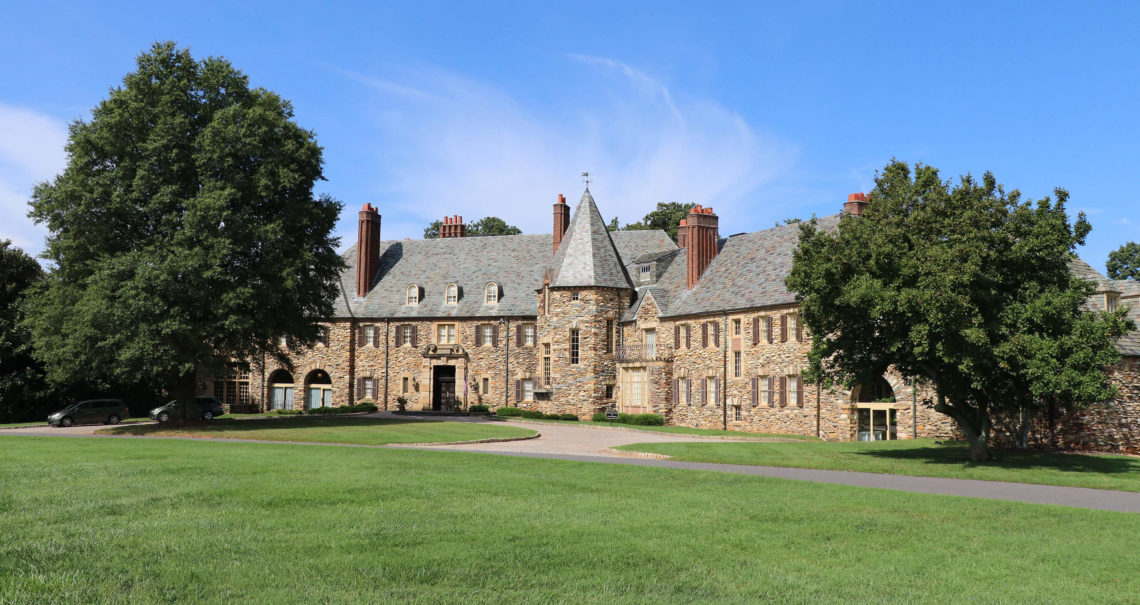 Peering over the front desk of Winston-Salem’s Brookstown Inn, a trio of giggling sisters exchange a five-dollar bill for a token and make their way to the Art-O-Mat by the front door. The oldest girl slips her token into the slot of this repurposed cigarette vending machine and confers with her two sisters before pulling the metal lever. They’re delighted when a tiny, 2×3-inch original oil painting of a purple and orange sunshine drops into the basket below.

When Winston-Salem guests arrive in the City of Arts and Innovation, a town whose transformative spirit is on display at every turn, several historic hotels like the Brookstown Inn can make for a tough choice. Read on for a roundup of five hotels, inns, and bed and breakfasts that tell the story of the city’s rich heritage. 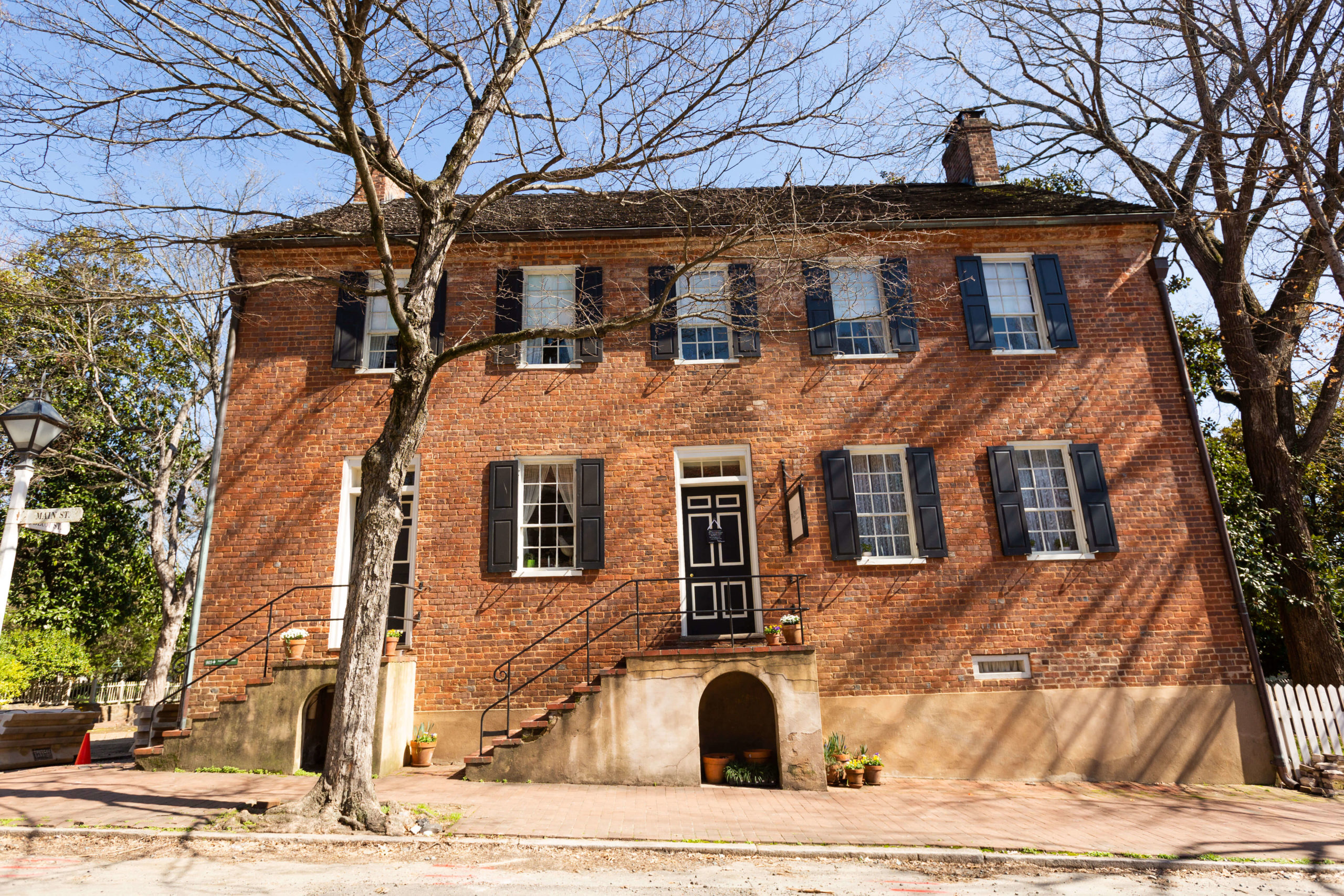 In the historic district of Old Salem, the Zevely Inn boasts 12 rooms meticulously restored to their 1845 appearance. photograph by Brittany Butterworth Photography

In the historic district of Old Salem, mature sugar maples shade wide, herringbone-brick sidewalks softened with moss. National landmarks, like the Salem Tavern — one of the country’s oldest surviving brick taverns — rest on almost every corner, giving visitors a glimpse of what life was like in 1766, when the district was originally settled by the Moravian community.

Make a reservation at the cozy Zevely Inn, a brick Colonial on the corner of Blum and Main, to spend the night at the hotel that first welcomed guests in 1845. With a single candle in every window, this bed and breakfast boasts 12 rooms meticulously restored to their 1845 appearance.

On the second floor overlooking Main Street, you can stay in the room originally belonging to the inn’s namesake, Augustus Zevely. A doctor and the mayor of Salem, Augustus practiced medicine and lived in the inn with his wife, Lucinda Blum, and their five children. “Our owner has a fantastic eye for decorating,” says innkeeper Cherie Gordon. “She imagined what Dr. Zevely’s room would have looked like. And like all the rooms in the house, the furniture was chosen to reflect that time period.” 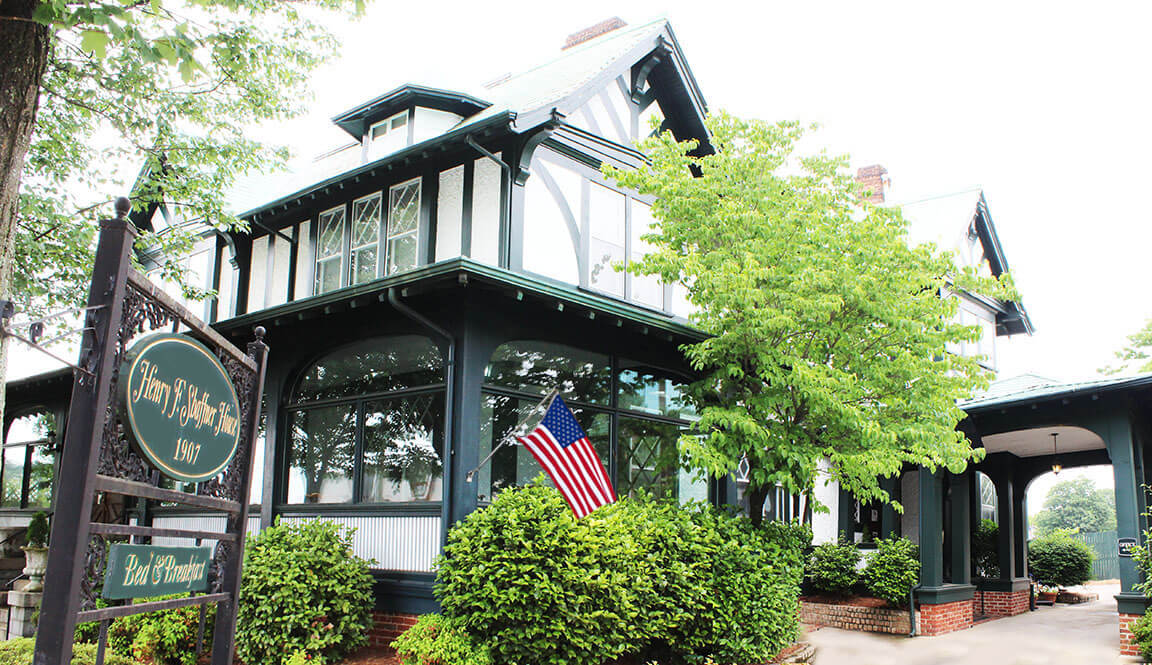 The Shaffner Bed and Breakfast features nine luxurious guest rooms, each with their own fireplace and unique architectural features. photograph by Visit Winston-Salem

Just six years before the towns of Winston and Salem merged in 1913, Henry Shaffner — later the founder of Wachovia Loan and Trust Company — built a palatial, Victorian-style Queen Anne Tudor on the corner of High and South Marshall Streets.

Today, this nine-bedroom home, transformed by Betty and Henry Falls in 1994 as The Shaffner Bed and Breakfast, features luxurious guest rooms, each with their own fireplace and unique architectural features. If you find yourself in the Wachovia Room, you’ll be treated to a city view through the original bay window that fittingly frames downtown’s Wachovia Building.

And in the breakfast room, a mantel from a 1766 Old Salem home graces the fireplace. “This is a home with a soul,” says Austin Hayes, the inn’s host. “It’s one of one.” 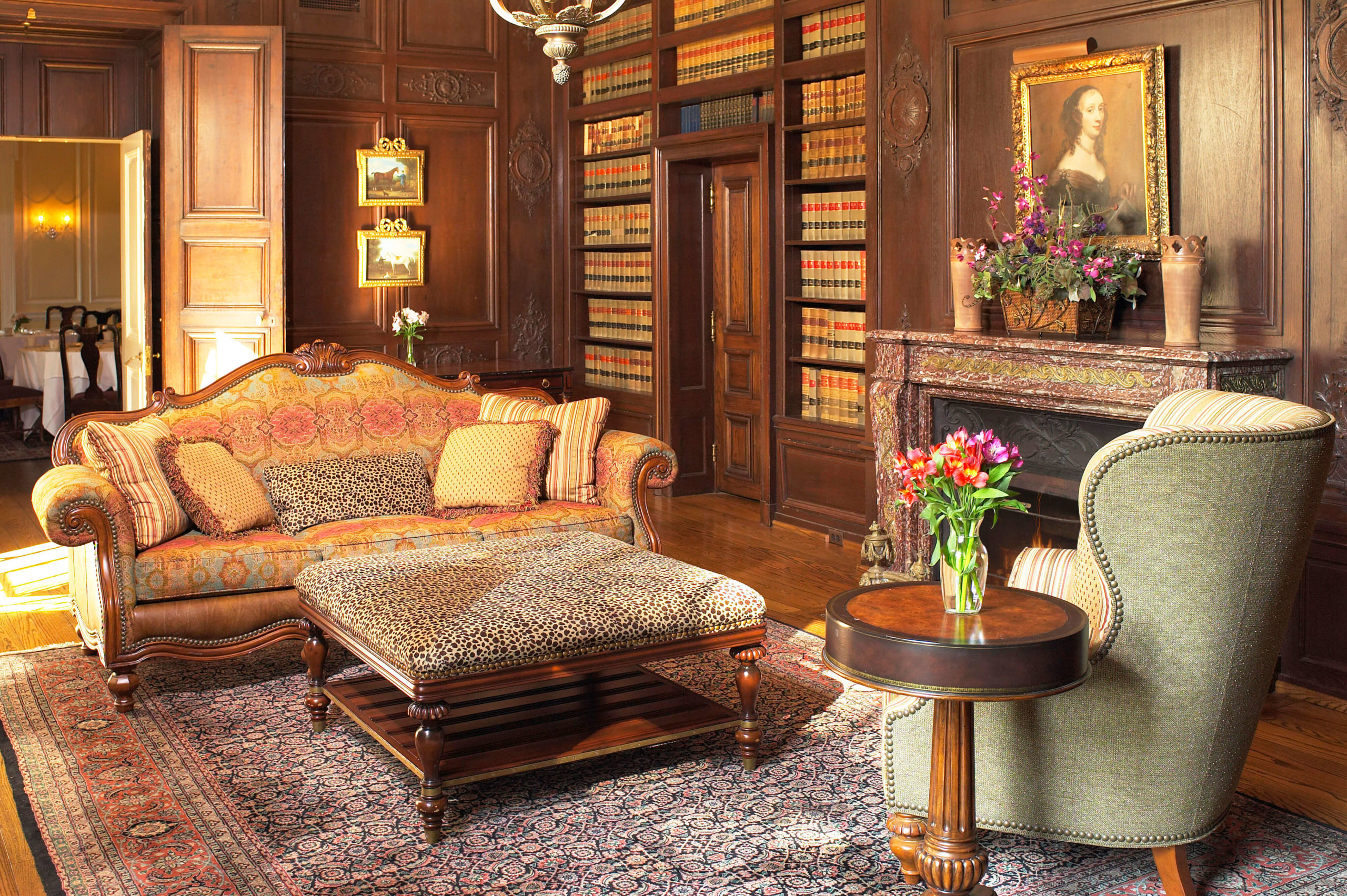 The interior style of Graylyn Estate is eclectic and reflects Mrs. Gray’s travels. The library has wood paneling imported from a hotel in Paris. photograph by Visit Winston-Salem

On 87 acres of pasture land and cornfields she purchased from R.J. Reynolds, Inc., Nathalie Lyons Gray and her husband, Bowman, built their 46,000-square-foot, 60-room dream home in 1932. It’s easy to describe the exterior architectural style of the Graylyn Estate, which looks like a storybook stone castle in the countryside: “Norman Revival, hallmarked by the circular stair tower that looks like a castle turret,” says marketing manager Mallory Forsman.

But the interior style? That’s a tough one. “Eclectic, maybe,” Forsman says, laughing. “The joke is that when Mrs. Gray traveled, she didn’t bring home souvenirs. She brought home rooms.”

Like the library, for example, whose wood paneling was imported from a hotel in Paris. “They bought the paneling because those walls originally housed a room that King Edward used in his Parisian office,” Forsman says. “Or the sunroom, inspired by the Italian Renaissance — the huge fireplace is modeled after one from Italy in the 1500s.”

Just a 10-minute drive from downtown Winston-Salem, the Graylyn Estate feels miles away from the city — and is within walking distance of Reynolda House, Gardens, and Village. “On the grounds, we have a pond stocked with fish, a volleyball net, tennis courts, and an outdoor swimming pool,” Forsman says. “We also have 55 acres of trails and bike rentals, if you want to go for a ride and explore.” 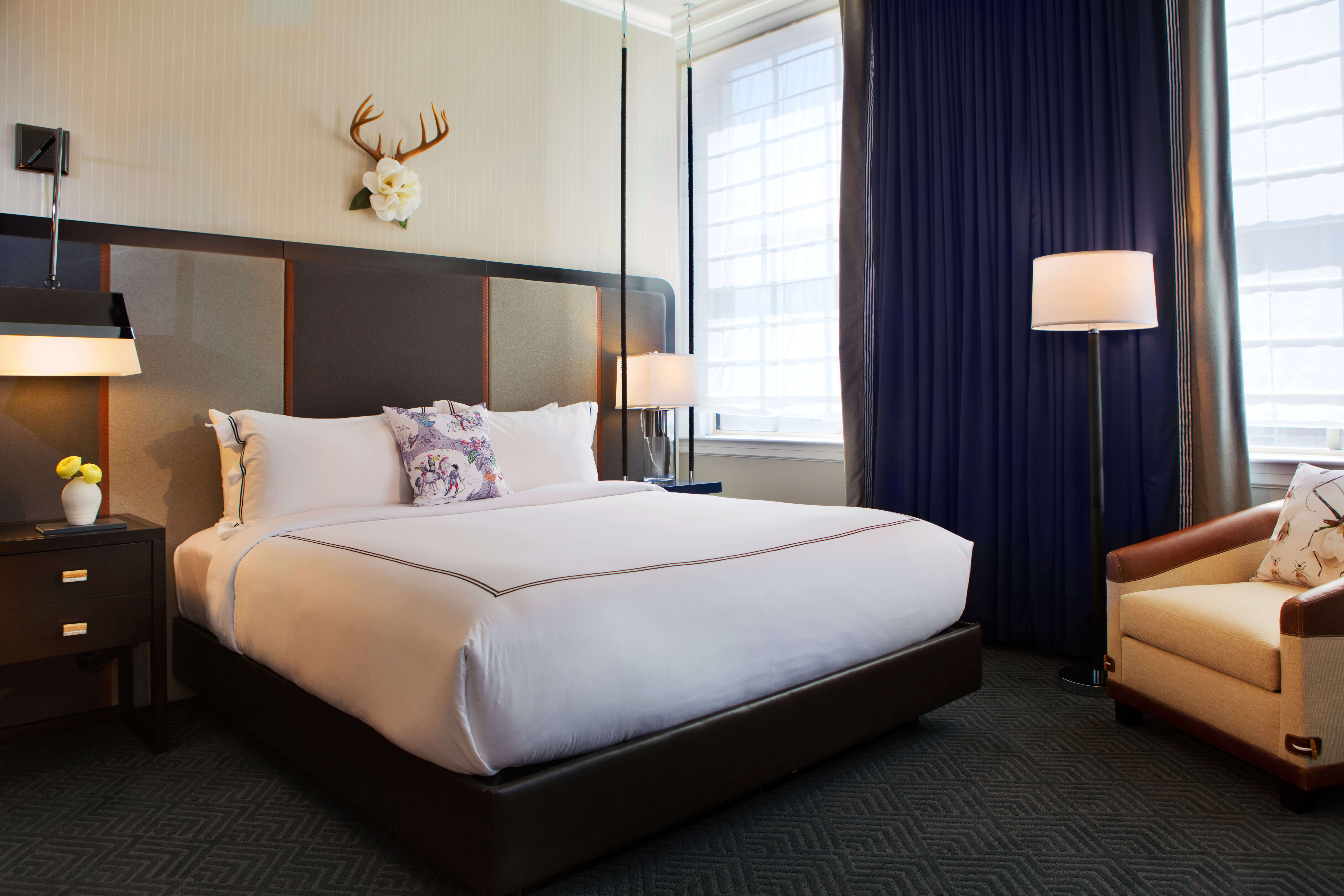 From its home in East Fourth Street’s historic R.J. Reynolds building, the Kimpton Cardinal Hotel is everything you would expect from the architectural marvel that inspired New York City’s Empire State Building. Standing watch over downtown, the 314-foot building was, in fact, the tallest in North Carolina when it was originally completed in 1929.

When you’re ready for dinner, you needn’t leave the lobby for one of the best meals in town. Have a seat in the Kimpton Cardinal’s French café-inspired restaurant, The Katharine, and order the staff-favorite roasted salmon, served with roasted baby carrots, grilled leeks and fennel, watercress, French feta, and pomegranate orange gastrique. 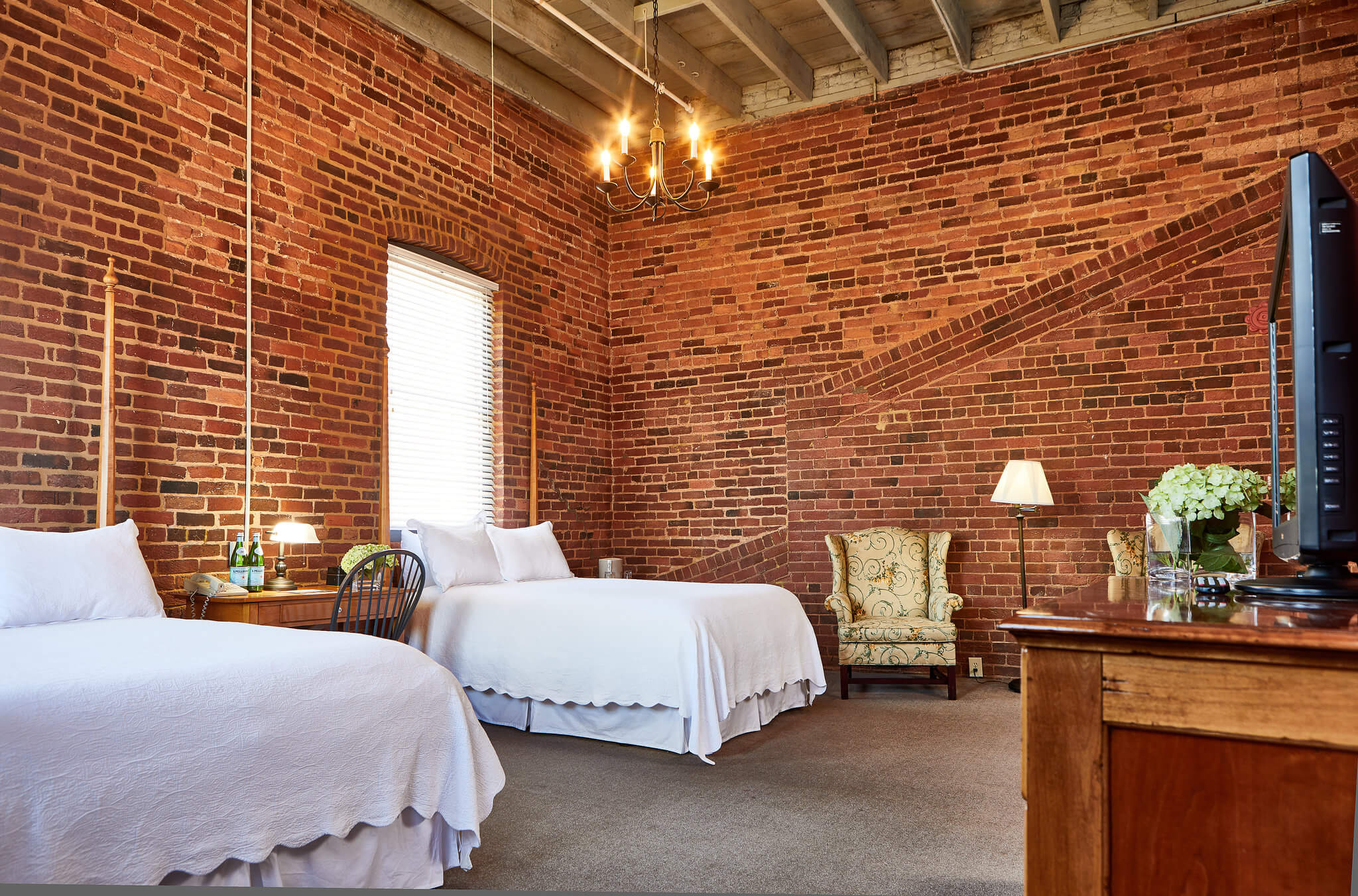 Back in the 1970s, when the old hydroelectric Arista Mill was at risk of demolition, a group of Winston-Salem visionaries saw potential in the soaring 20-foot-tall ceilings, original wooden pine beams, and hand-laid bricks. “This building has always been important to Winston-Salem,” Woodcock says. “As one of the first mills in the South to have electric lighting, it jump-started the industrial revolution in this area.”

A half mile from Old Salem and four blocks south of downtown Winston-Salem, the Brookstown Inn’s 70 rooms — 30 bi-level suites and 40 airy, light-filled rooms — each feature the mill’s original floor-to-ceiling windows, plush linens, and modern amenities like refrigerators and microwaves tucked into armoires. The hotel’s commitment to serve as a “living museum” is even revealed in its hallways, where guests linger to check out antiques like one of the mill’s original fire carts, an 1880s tobacco cart, and paintings by local artists.

“You don’t have to be a guest to feel the history here,” Woodcock adds. A serene courtyard the hotel shares with Visit Winston-Salem is open to anybody who wants to duck in from Cherry Street. And the property’s Cotton Mill Lounge, a jazz-themed speakeasy, welcomes locals along with guests who stop in to take advantage of the Brookstown’s wine and cheese happy hour.