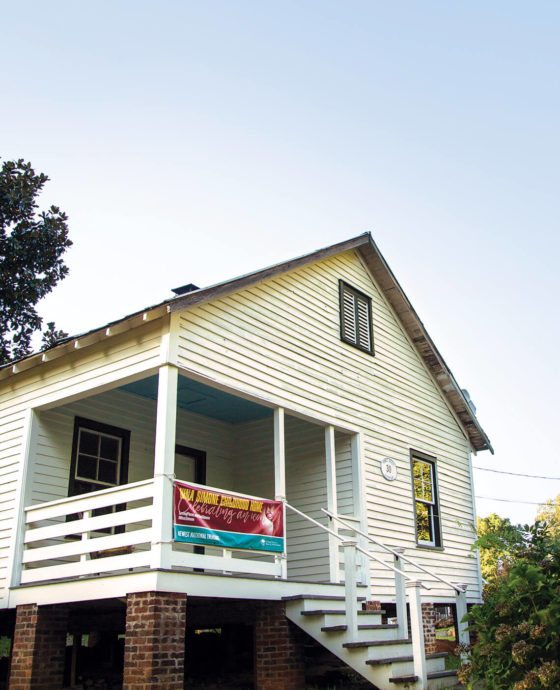 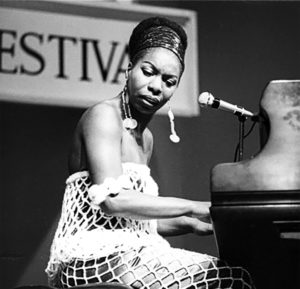 From the modest house perched high on brick pilings in the low hills of Polk County came one of the most important voices of the civil rights movement. It was a voice that wondered how it felt to be free, a voice of promise for millions of Americans who were young, gifted, and Black — a voice that excoriated Jim Crow Mississippi in the harshest language possible. It was the voice of Nina Simone, who, through her revolutionary music, helped shape the movement, giving it a soundtrack with her truth and, by extension, the truths of all of those who looked and felt like she did.

In June 2018, Simone’s childhood home was designated a National Treasure by the National Trust for Historic Preservation. It was then, at an unveiling on an early summer afternoon, that the familiar sounds of Simone’s version of the show tune “Feeling Good” rang off of the house’s peeling clapboards as the soulful voices of five women brought the past into the present. Plans for the future of this historic home remain uncertain — the owners, a group of New York-based artists, have mentioned turning it into a space for an artist residency program. But the 600-square-foot house will stand just as it did when Simone was a little girl first learning the piano skills that would make her famous, honing the music that would give voice to the masses.

The facade is commanding, stretching almost half a downtown city block, with large gold letters on a deep red background. From afar, the old F.W. Woolworth Co. in Greensboro looks like it could be any five-and-dime from yesteryear that’s somehow survived our modern transition from traditional department stores to big-box and online retail outlets. But as you inch closer, images of North Carolina’s civil rights history come into focus through the building’s windows, and it becomes clear that this is no ordinary Woolworth’s.

Nine years before Nina Simone recorded “To Be Young, Gifted and Black,” four Black students from North Carolina Agricultural and Technical State University — Franklin McCain, Ezell Blair Jr. (now Jibreel Khazan), Joseph McNeil, and David Richmond — sat at the whites-only lunch counter in this downtown Woolworth’s and asked to be served. On February 1, 1960, those students, who soon would be known as the “Greensboro Four,” became the spark that ignited a nationwide sit-in movement.

A little more than three decades later, in 1994, the Greensboro Woolworth’s closed, and the building was set to be demolished. But after years of delays due to the efforts of community members and civil rights activists, a partnership was formed to turn the building into a museum recognizing the role that the Greensboro sit-ins played in the civil rights movement. On February 1, 2010 — the 50th anniversary of the first Greensboro sit-in — the International Civil Rights Center and Museum opened. Its purpose, says Senior Interpreter and Special Events Coordinator La’ Tonya Wiley, is to examine “the promise of America versus the contradictory practice of our nation” — the promise being that “all men are created equal, with inalienable rights.”

When visitors wind through the old Woolworth’s building today, images of enslaved people, firebombed Freedom Ride buses, and lynchings provide an unflinching look at some of the horrors that Black Americans have faced. A re-created bus station archway emblazoned with the words “Colored Entrance” leads to the “Battlegrounds” section of the museum, where exhibits focus on some of the artifacts and key figures of the civil rights movement: A copy of the Green Book, the guide that helped Black travelers safely navigate our highways, sits under glass near a display of the uniform and model planes of a Tuskegee Airman, Capt. Harvey Alexander, who later taught at historically Black universities in North Carolina. Farther down is the robe of the Rev. Samuel Billy Kyles, who was standing beside the Rev. Dr. Martin Luther King Jr. when he was assassinated. Two galleries away is a chair from the Blacks-only balcony of Greensboro’s Carolina Theater, where Jesse Jackson led a 1963 march to desegregate the building.

The museum’s centerpiece is a re-creation of the old Woolworth’s cafeteria that includes an entire original section of the lunch counter where the Greensboro Four engaged in the sit-in. Original and era-appropriate details show what the space would have looked like in 1960. Behind the roped-off row of stools and counter, a video reveals what the Greensboro Four may have experienced as they sat down and ordered their meals.

As a celebration of the courage of these civil rights activists and leaders, the International Civil Rights Center and Museum is a singular monument to the struggle — past, present, and future — of what it means to be Black not only in North Carolina, but also in America at large.

The story of what it means to be Black in Charlotte, as the city and surrounding counties evolved from an agricultural center at the end of the Civil War to the nation’s second-largest banking hub, is best told in the halls of the Levine Museum of the New South. “The goal of the museum,” says Dr. Willie Griffin, the staff historian and a Charlotte native, “is to tell everyone’s history in Charlotte.”

In the permanent exhibit “Cotton Fields to Skyscrapers,” five modules take visitors on a historic walk through Charlotte. The “We Shall Overcome” module tells of the local civil rights movement. This centerpiece highlights leaders like Kelly Alexander, who, in the 1930s and ’40s, helped revive the Charlotte chapter of the National Association for the Advancement of Colored People and later headed North Carolina’s NAACP Conference, which became the largest in the nation with more than 120 branches. Also told is the story of Dorothy Counts, who, at age 15, was one of four children to first integrate Charlotte’s schools when she walked up to Harry P. Harding High School to a barrage of indignities by white adults and students. “We Shall Overcome” also tells of the roles of J. Charles Jones and Dr. Reginald Hawkins — products of the theological seminary at the historically Black institution Johnson C. Smith University — who spurred on Charlotte’s sit-ins, which started eight days after the Greensboro Four took to the lunch counter at Woolworth’s. 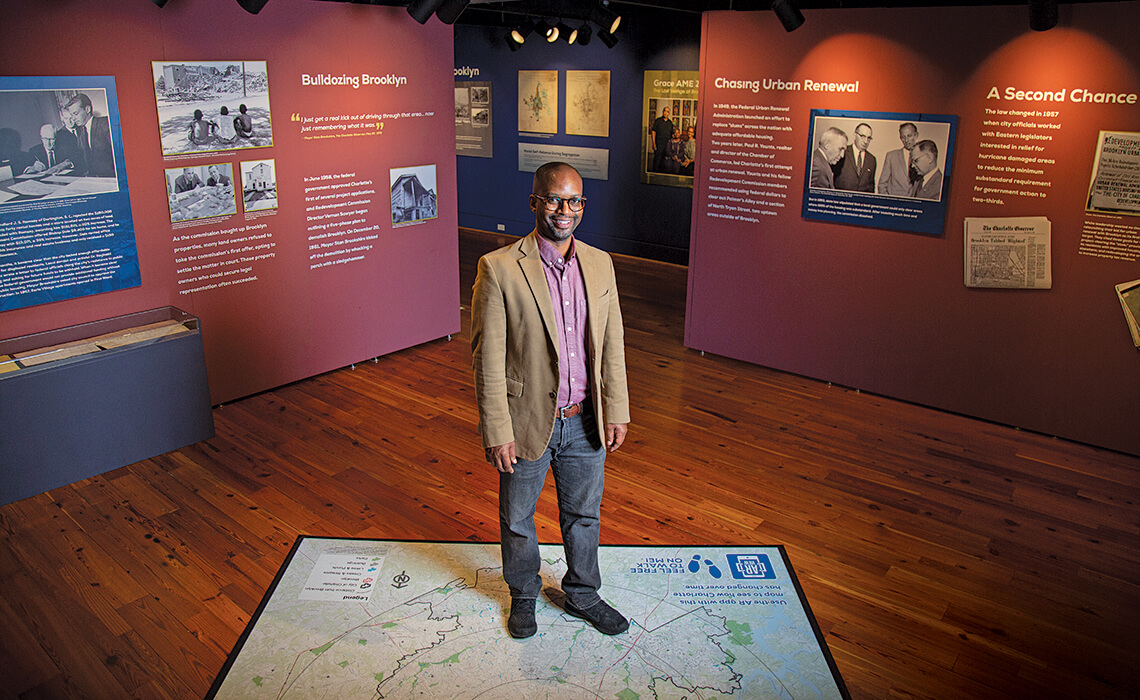 Growing up in Charlotte, Dr. Willie Griffin was led to believe that his city had no notable civil rights movement. Later, as a scholar of history, he learned differently, and today, Griffin is dedicated to sharing Charlotte’s civil rights story with as many young minds as possible. photograph by Dillon Deaton

One of Charlotte’s great triumphs is also told in the “Cotton Fields to Skyscrapers” exhibit: the city’s innovative public-school integration program informally known as “busing.” The landmark 1971 Supreme Court ruling Swann v. Charlotte-Mecklenburg Board of Education — requiring the busing of students to achieve integrated schools — became the national case study in successful desegregation.

The Levine doesn’t focus on the past only; it also brings the fight for equality into the present, looking at Charlotte from a geographical and demographical perspective in its “#HomeCLT” exhibit, which explores the evolution of housing in the city’s various neighborhoods. An addition to this exhibit explores the rise and fall of the old Brooklyn neighborhood, which was once a city within a city, with its own “Black Wall Street.”

Overall, the Levine Museum of the New South tells the story of a city that has always existed in flux, one that continues to grow at unprecedented rates, and how that sense of perpetual evolution has informed — and, more importantly, has been informed by — the lives and work of Black Charlotteans.

Much like the Levine Museum’s “Cotton Fields to Skyscrapers” exhibit, Durham’s Hayti Heritage Center celebrates the past, present, and future of Black North Carolinians in a specific city. Housed in the historic St. Joseph’s AME Church at the center of what was once Durham’s most thriving Black residential neighborhood, Hayti — pronounced “hay-tie,” and connected to what was known as the city’s “Black Wall Street” — the Heritage Center focuses mostly on cultural arts and education.

St. Joseph’s was built in 1891 by a congregation founded 23 years earlier by AME missionary Edian Markham. Thanks to the efforts of modern congregants — along with aid from the powerful Duke family — funding was secured, a nonprofit was formed, and the building was listed on the National Register of Historic Places. St. Joseph’s is one of the few structures that was spared from the razing that claimed most of the Hayti neighborhood when the state began plans for the Durham Freeway in the 1960s and early ’70s.

Today, sounds of African drumming and dance, of spoken-word and slam poetry, reverberate through these halls. The center’s regular slate of programming includes concerts by blues, jazz, gospel, and classical artists, bringing world-renowned names such as the Black Mountain-born R&B singer Roberta Flack, jazz musician Roy Ayers, actress and singer Melba Moore, and spoken-word artist G Yamazawa to its historic performance hall. Gallery exhibits display works by North Carolina artists like Dare Coulter (whose portrait of Nina Simone was used to help raise funds for the preservation of her childhood home), Olivia Gatewood, Wade Williams, and Ed Baxter. And though many in-person and group-focused gatherings at Hayti are now on hold indefinitely due to the Covid-19 crisis, the center has been livestreaming events.

Executive Director Angela Lee also hopes that funding from the Safe Routes to Parks initiative will help the center link Hayti to another historic neighborhood, Black Wall Street Gardens, for walkers and cyclists. “We have identified a route that will engage folks,” Lee says. “It’s a way of getting folks out and moving, because healthier communities have people that move — but you have to have something to move for.”

East of Greensboro, in the Gibsonville-Sedalia area, the Charlotte Hawkins Brown Museum occupies what was once the Palmer Memorial Institute, a school for Black students. Sprawling over 40 acres and a handful of stately buildings and homes, the museum recognizes the work of Brown, who founded the institute in 1902.

In its 69 years, the Palmer Institute became a nationally known and fully accredited preparatory school, attracting Black students from across the nation to the tiny Piedmont town of Sedalia in search of higher learning. Wandering from building to building, visitors can retrace the paths of the thousands of students whom the institute educated, envisioning the haven that Brown created in a South that, through all of those decades, was not very welcoming.

Like North Carolina’s other civil rights monuments, the Charlotte Hawkins Brown Museum brings to life the stories of a troubled but triumphant past, offering opportunities to examine our history and recognize how it relates to our present and our future. Mostly, it reveals the courage it took for our civil rights leaders and community members to help shape a vision for America that might someday truly honor our founding fathers’ promise that we all are, in fact, created equal.