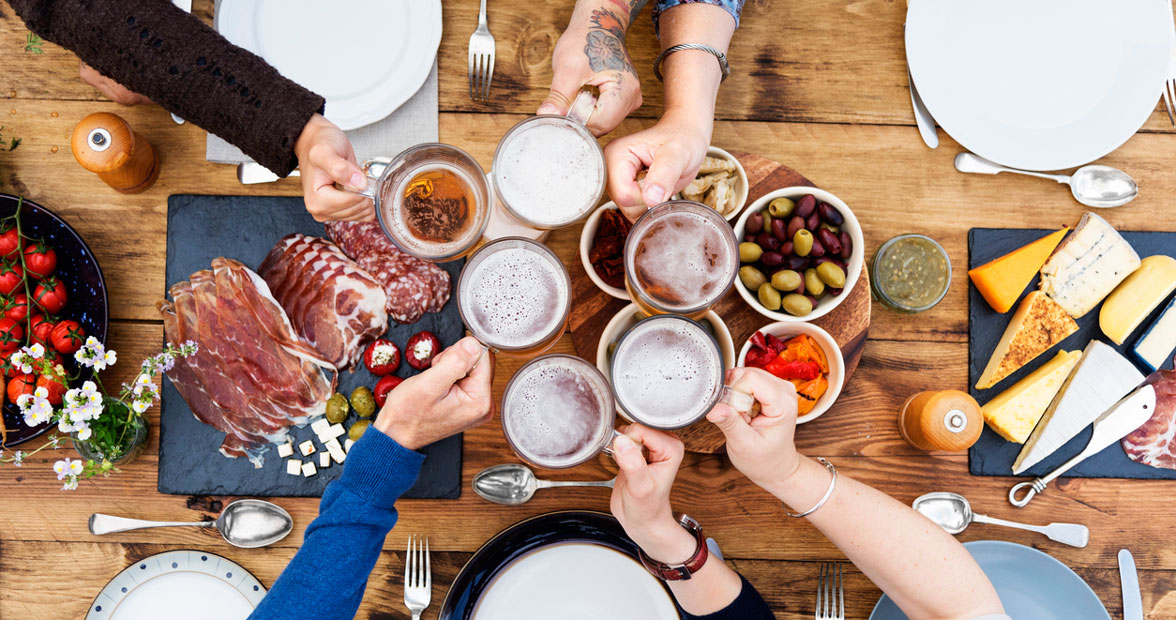 There’s a time for libations, and there’s a time for lunch — luckily, at these six taprooms across the state, talented kitchen staffs have made it possible to find great beer and great food in one location. Grab a table, order a tasty meal, pair it with a good brew, and enjoy the offerings at these brewery restaurants.

Lost Province Brewing Company
Around the corner from Boone’s Mast General Store, you’ll find Lost Province Brewing Company, a two-story brewery and restaurant. The copper-clad dome of the wood-fired oven has taken a permanent seat at the end of the bar, and it rivals the warmth of a small fireplace. Offerings like the Kiss My Grits lager and the pimento cheese sandwich, served on Lost Province’s own hearth-baked sourdough bread, feel true to the brewery’s Southern Appalachian roots. Next visit, try the Attitude Adjustment lager — despite its name, this beer is no punishment. Enjoy it alongside a wood-fired Neapolitan pizza that the whole family can share.

Wicked Weed Brewing
With its hoppy ales, wide selection of sours, and an upscale menu, Wicked Weed has made its mark within Asheville’s busy brewing scene. Housed in a former hardware store, the brewpub boasts exposed brick walls and a generous patio area. If you’re looking for pub snacks, you may be tempted to reach for some salt-and-vinegar popcorn between pints of Freak of Nature double IPA. The real treats, however, can be found on the full menu. Whet your appetite with beef tartar and candied Brussels sprouts, and round out your meal with a Chocolate Covered Bourbon porter for dessert.

Brewery Bhavana
This James Beard Award-nominated restaurant combines dim sum, a flower shop, and a bookstore under one roof, and serves beer made at their brewing facility located a mile away. Although pork bao and pan-fried dumplings make for unexpected brewery food, servers are happy to help you navigate the 40 silver taps behind the white marble bar. Lon Bounsanga, Brewery Bhavana’s executive chef, offers dishes for everyone, with a variety of gluten-free, vegan, and vegetarian options. The elegant and subtle flavors that Brewery Bhavana is known for can be found in everything from the crispy pig ears to the mango-peppercorn saison, making it the ideal location for midday small plates or special dinners.

Foothills Brewing
In the heart of downtown Winston-Salem, Foothills offers a dozen beers on tap daily, as well as a full menu of elevated pub-style fare, from burgers to wings to sandwiches. If you’re stopping in for lunch, ask your server about the “Shanewich” — a chef’s-choice sandwich of the day, named after chef Shane Moore. Or, raise a pint of People’s Porter to this fact: The brewpub is open Sunday through Tuesday until midnight, and Wednesday through Saturday until 2 a.m., making it a popular stop in the city when a late-night craving for soft pretzels dipped in beer cheese strikes.

Wrightsville Beach Brewery
Wrightsville Beach Brewery has a menu and a beer for any time of day. For a little more than a year, this 20-barrel brewing facility has been creating five core beers plus seasonal offerings that can be served alongside brunch, lunch, or dinner. The Wilmywood witbier, brewed with fresh orange peel, could replace a mimosa for a weekend brunch; however, it’s the savory entrées, such as a few slices of their po’boy or shrimp-and-grits pizzas, that make a meal here memorable. Wear your brewery gear on Wednesdays to get 10 percent off.

Bill’s Front Porch Pub & Brewery
Bask in the sunlight with your beer and bites on the outdoor patio of Bill’s Front Porch. The weekend brunch menu satisfies fast-food cravings with its Sunday-fil-a chicken sandwich and peach milkshake IPA. The breakfast stout — brewed with toasted oats, cocoa powder, maple syrup, and local cold-pressed coffee — is also a great wake-up call. If you can’t make it to brunch, Sunday nights feature trivia and tater tot skillets. The indoor restaurant and bar offer a full view of the brewing equipment from every angle, and guests can even check the real-time status of the beer being brewed on the premises.