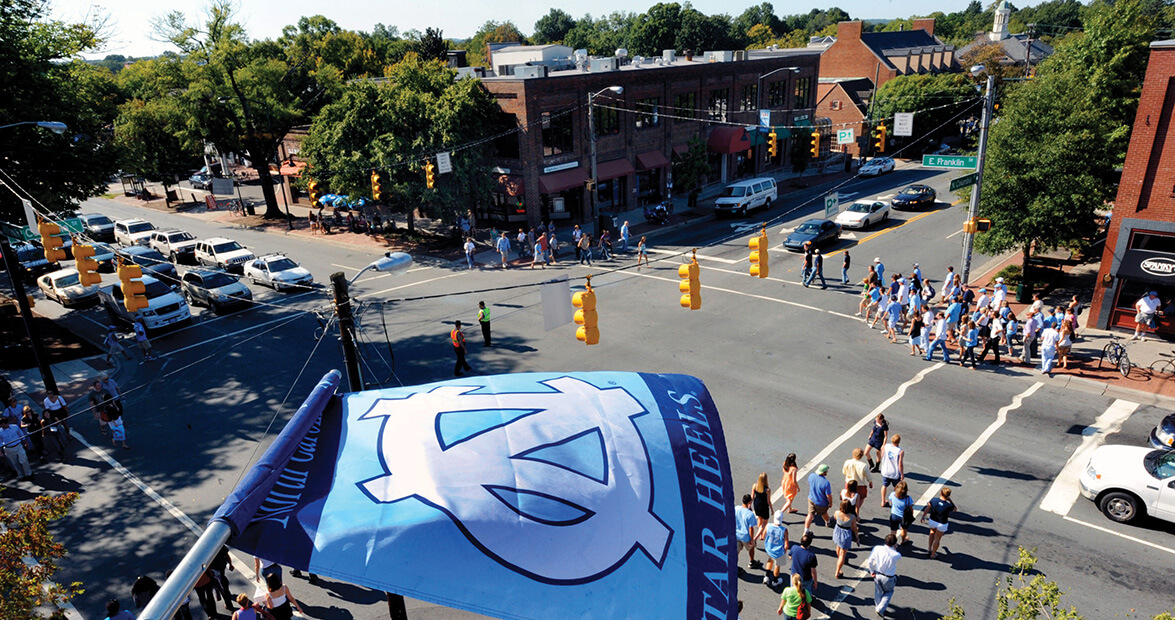 Editor’s Note: This story was originally published in 2014.

Boone makes no bones about being a college town. “Mountaineer” — the word — can be found on motel, restaurant, and clothing store signs, and “Mountaineer” — the student — can be found everywhere from hiking trails to ski slopes to bars to, of course, one of the 24,050 seats in Kidd Brewer Stadium, home to the football team with three consecutive national championships. Before the game, head out to Horn in the West, where the Watauga Farmers Market is open every Saturday through November to provide local meats, artisanal cheeses, and hardy plants. Not into football? Hop on one of the free and cleverly named AppalCART buses for King Street, App’s heart-beating artery, and check out Macado’s, Mellow Mushroom, Highway Robbery (“the little college kid boutique”), and the Mast General Store, where you can still find Sugar Daddies, Dots, and Fireballs alongside flannel shirts and walking sticks. Tired of your Tevas? Get reshod at Footsloggers and try your hands — and feet — on its climbing wall. Alums return over and over to Danny Mauney’s Red Onion Café (“I worked there all four years in school, and, despite that, it’s still in business,” a friend claims). Settle into a rocker on the front porch at Hob Nob Farm, a great spot to enjoy one of those bluebird days that the mountains are known for. Or order a cocktail at Char, gaze over Howard Street from the patio, and you’ll realize why some Mountaineers never leave Boone.

Ah, Chapel Hill, the quintessential college town, begging the existential question: Which came first? The town or the college? (Answer: the college.) An afternoon stroller on Franklin Street can barely tell where the street ends and the university begins. In the middle of it all sits The Shrunken Head Boutique, a Chapel Hill institution since the ’60s and the source for all things Carolina, from humble bumper stickers to blue boat bumpers. Not far away is Julian’s, Chapel Hill’s premier clothier since 1942, owned by native son and apparel designer Alexander Julian. Farther down, a small fee will buy you membership at The Crunkleton bar, wood-walled and cozy, where you can say, simply, “I’m feeling gin-ish,” and the bartender will create your personal drink, perhaps with a burned orange peel for its bitter essence. One street over, practice your Shakespeare soliloquy or belt out your best “Don’t Rain on My Parade” at the tree-ringed Forest Theatre. Cruise the quaint homes and charming gardens on Gimghoul Road and, if you dare, approach the mysterious Gimghoul Castle, where dark doings both inside and out are rumored to have taken place, and perhaps still do.

Down East, make it a Greenville, or G-Vegas, weekend, beginning with Freeboot Fridays, held at Five Points Plaza from 5-8 p.m. on the evenings before home games. You’ll know it when you see it: Look for the inflatable pirate ship. Players will be running through a different inflatable — a pirate skull — at Dowdy-Ficklen Stadium on game day. But aaarghhh, mateys, there’s more to Greenville than purple-clad Pirates. If you’re bigger on exploring than cheering, amble the Greenway walking and biking path along the Town Commons and the Tar River. Drop in at the Jefferson Blount Harvey Building, a flagship structure that’s home to Jefferson’s, a gift and flower store, and other shops. Or meander to the historic St. Paul’s Episcopal Church to gaze with awe at the Fisk Organ. And a fan’s gotta eat: Carb it up at the Scullery restaurant and coffee/ice cream shop. Finally, drop in for a drink created by master mixologist Jimmy Ingenito at the StarLight Café.

Leave it to Lees-McRae College, in Banner Elk, to include a competitive rock climbing team in its intramural offerings. And why not, when you have the highest elevation of any college or university in the U.S. east of the Mississippi? Check out the campus itself, especially the landmark Rock House, built of native stone in 1920, and Tufts Tower, a former water tower that houses the college’s chimes. The Greenway trail runs right through campus, at the Recreation Center; get your walk on for a mile or so over the Elk River and through town proper. The world-famous (it’s true!) Woolly Worm Festival is held over the third weekend in October. Tour and sample prizewinning wines at Banner Elk Winery, or check in and collapse at its luxury bed and breakfast, The Villa. If you’re seeking a dining experience, the Cajun jambalaya at Louisiana Purchase restaurant or the rustic elegance at Artisanal restaurant are your best bets.

Thanks to a town-meets-gown University Commission board, Lenoir-Rhyne University and Hickory have become inextricably linked. But you don’t have to be a Bear — LR’s mascot — to participate in Hickory’s Oktoberfest, voted one of the top 10 Oktoberfests in the country, perhaps due to Catawba Valley’s history of having been settled by German immigrants. Those guys know their beer. And their festivals. Lenoir-Rhyne boasts some of the best-attended Division II football games in the South Atlantic Conference, and they competed in the NCAA’s South Atlantic Conference Division 2 football championship. After a game, stop at the microbrewery Olde Hickory Tap Room on Union Square, downtown, where hundreds of named and numbered mugs hang from the walls and ceilings; yours can be there, too. Next time you’re in Hickory, they’ll fetch it down and pour you a pint (or more).

Wilson began as a farm market in 1849, but the presence of Barton College, which has been around in one form or another for more than a century, marks it as a college town, too. The Barton Bulldogs compete in 16 different sports, but the City of Beautiful Trees offers lots of ops for other kinds of action, too. Take a walking tour through the Broad-Kenan Historic District, which  features 150-plus bungalows of the late 19th and early 20th centuries. The N.C. Baseball Museum will take you out to a different sort of ball game, showcasing North Carolina players from Jim “Catfish” Hunter to Gaylord Perry. For those who consider shopping a sport, Wilson is more aptly known as the City of Antiques, with more than 25 area antiques shops, including internationally known Boone’s, a k a four acres of room candy. For spectators of every age, head to the Vollis Simpson Whirligig Park, where, upon completion, 31 of Simpson’s monumental constructions will be permanently exhibited.