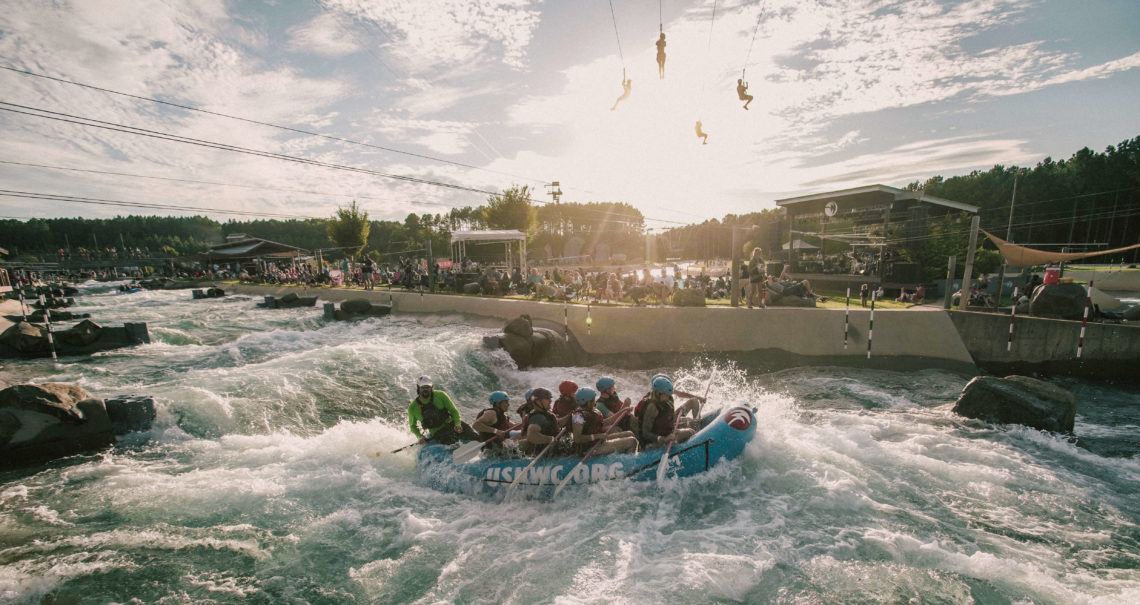 With his lab mix, Jackson, perched on the bow, Jesse Hyde slips his kayak into the calm waters of the Catawba River. From their launchpad on the Flatwater Dock at Charlotte’s Whitewater Center, Hyde sets his sight on Sadler Island, a peaceful 8-acre sanctuary rising from the main channel of the Catawba River. This is their Saturday routine: Hyde paddles through quiet nooks and shaded coves along the island’s one-mile perimeter before beaching his boat on the south end sandbar. There, he and Jackson take off. “We go hiking, and I’ll let Jackson off leash so he can explore the island with me and bounce around a little bit.”

Hyde is the director of brand at the U.S. National Whitewater Center, more than 1,300 acres of protected land along the Catawba River and Long Creek. Arguably most famous for its role as official U.S. Olympic Training Center for the American canoe and kayak teams, Charlotteans know it’s much more than that. “The heart of what compels us is our mission to help people get outside and play,” Hyde says.

At the center, visitors can paddle along the same two- to four-class rapids as Olympic athletes. But they can also spend a day hiking along more than 50 miles of trails, or rock climbing the world’s only deep-water solo climbing complex. From the authentic whitewater channel to his favorite island escape, Hyde shares five of the center’s most-loved activities.

When plans for the Whitewater Center first took shape in 2001, the point was to use whitewater as a catalyst to build an urban outdoor center. There are just a handful of whitewater training facilities across the globe, Hyde explains, and an authentic whitewater course could bring a relatively inaccessible sport to Charlotte’s large population base.

The course, constructed of 1,500 meters of concrete, is the world’s largest manmade whitewater system, recirculating 12 million gallons of well water with high-powered pumps. Along the gradual 21-foot drop, paddlers have an opportunity to navigate the river’s standing waves, holes, and eddylines. “It’s as real and authentic as paddling on any natural river in the southeast, as far as the technical aspects of the river itself,” Hyde says.

A professional guide leads participants down the class two to four rapids, and you can select your rafting experience — options range from family rafting to rodeo rafting — based on your group’s age and skill level. 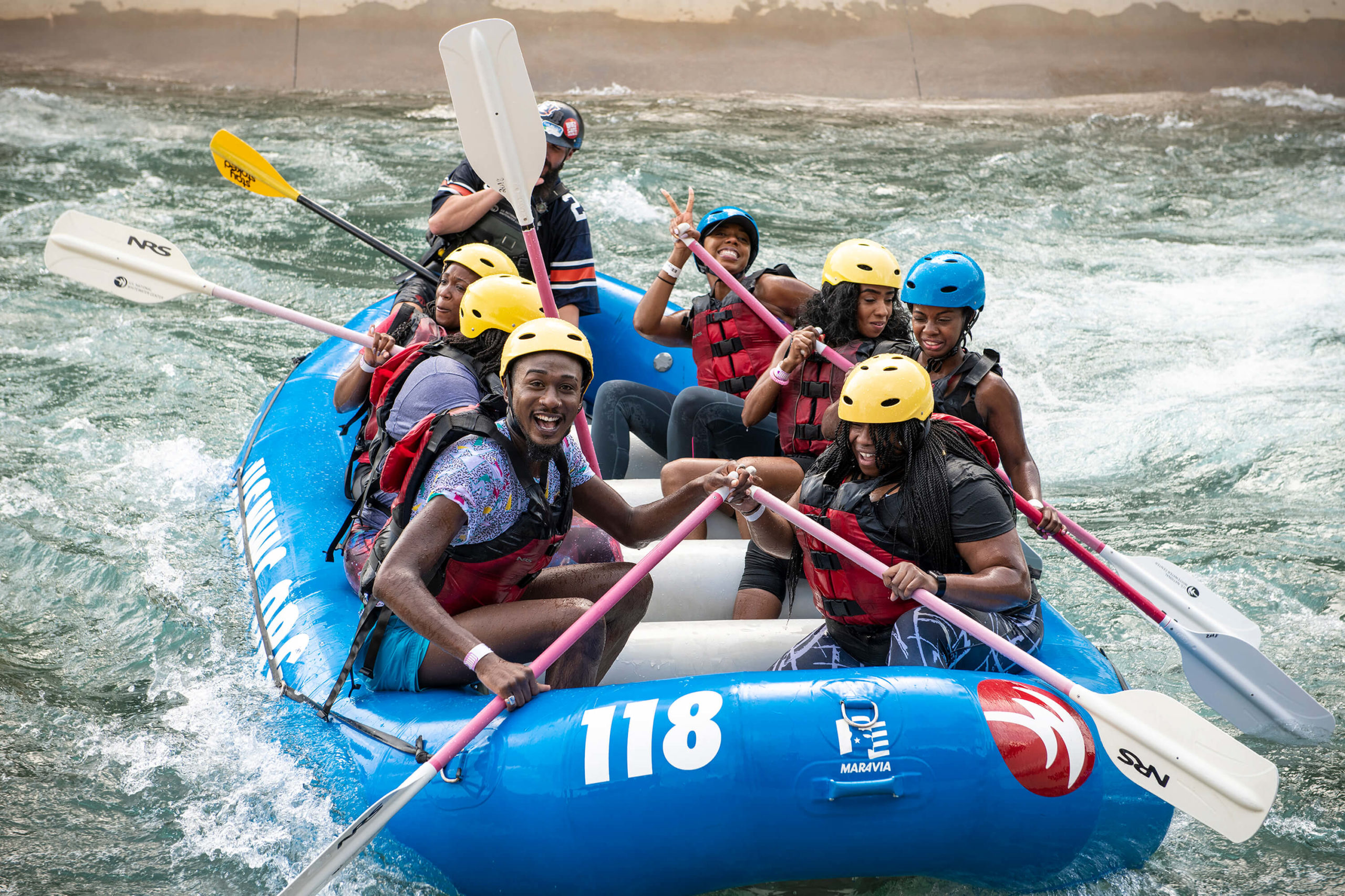 Navigating the rapids on the whitewater course photograph by Justin Gollmer

Trek 50-plus miles of trails.

By the time it makes its way through tall pines, beeches, and oaks, sunlight scatters into dancing specks on the mixed-use trails that weave their way through the Whitewater Center’s 1,300 acres. It’s a magical setting for mountain bikers, trail runners, and hikers who find themselves “away from it all” in Charlotte. 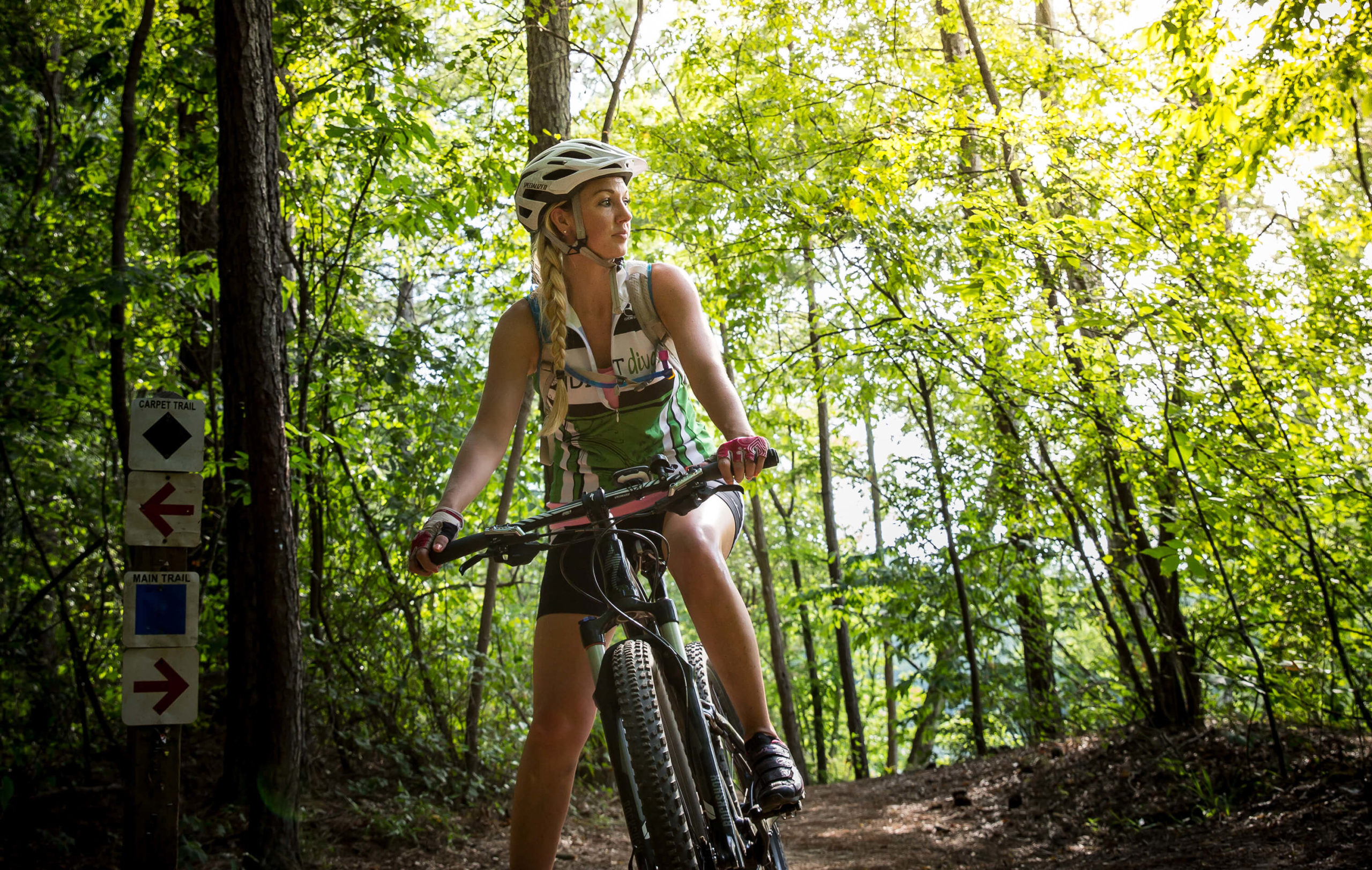 Biking the trails at the U.S. National Whitewater Center photograph by Charlottesgotalot.com

Regardless of their sport, athletes share the trails that are graded on a scale common to that of the ski industry: green, blue, and black diamond. “We have a variety of all three, so if you’re a novice, there are several miles where you can gain your confidence without much elevation gain,” Hyde explains. “On more than 50 miles of trails, there are tons of ways to get lost.”

Where the Catawba River’s wide waters pass through the Whitewater Center, paddlers trade thrilling rapids for gentle flatwater. Here, kayakers are treated to an all-natural display. Osprey glide overhead while turtles pop up for a friendly greeting as you pass by in your flatwater kayak or stand-up paddleboard. “Flatwater paddling is one of the most accessible sports we offer because all skill levels can do it,” Hyde says. “Children as young as 4 years old can paddle down the river in a kayak alongside their parents.” 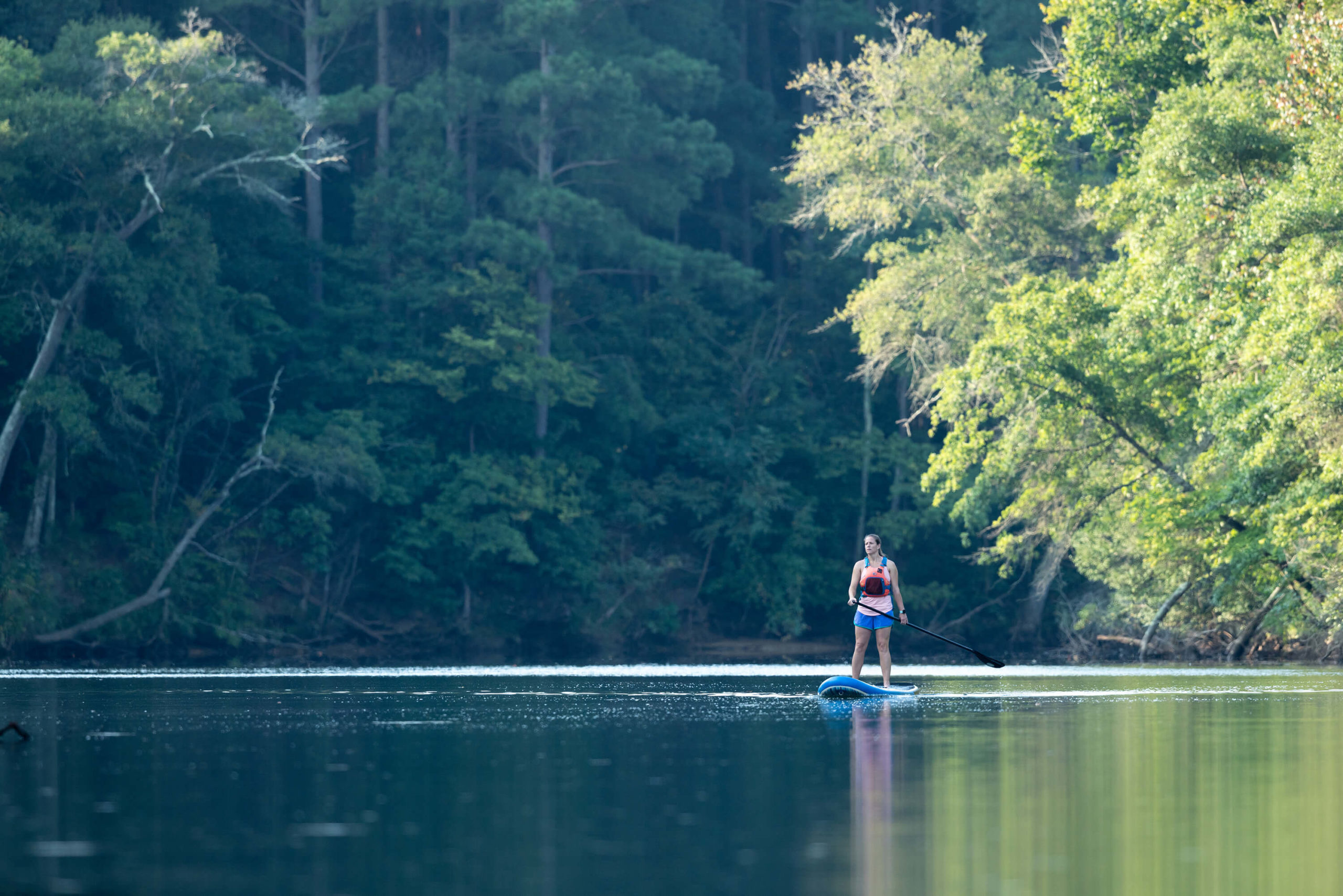 Out on the water, there’s plenty to explore, from Hyde’s favorite Sadler Island to Long Creek, a small tributary of the Catawba River on the north side of the Whitewater Center.

At the deep-water solo climbing complex, five climbing walls — ranging in height from 20 to 45 feet — allow climbers to shirk their usual weighty and cumbersome equipment. Thanks to a 20-foot-deep pool directly underneath the arched climbing walls, climbers have no need for harnesses, ropes, and anchors. Instead, they can climb freely until they’re ready to drop, making a splash in the aerated pool below.

“It’s designed to soften your fall as much as possible, so it’s not unlike coming off a diving board,” says Hyde. “We regularly host international climbing competitions, and the best of the best are out there climbing these walls. But it’s open for all skill levels, even if you’ve never climbed before.” 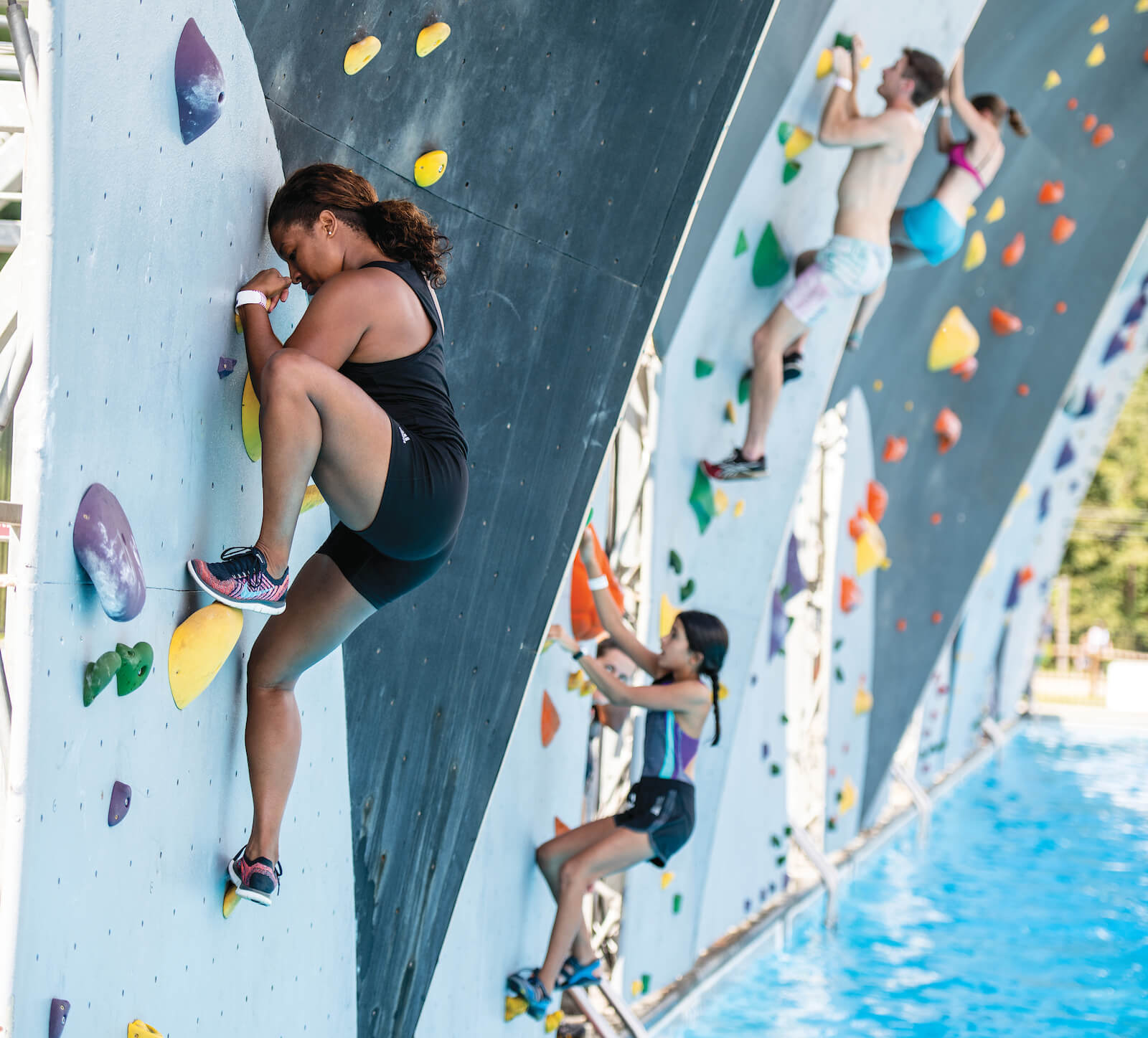 At least once each day, the Whitewater Center hosts a free yoga class on the serene South Ridge section of campus. Tucked under a canopy of hardwoods and fairy lights, experienced instructors lead participants through Slow Flow, Open Level Flow, and Fun Flow, three versions of Vinyasa tailored for beginner, intermediate, or advanced yogis.

“You don’t even need a pass to come join our yoga classes,” Hyde says. “It’s a great way to meet new people and be active in an outdoor environment, all while maintaining social distance.”

In addition to the center’s Daily Yoga series, Stand-up Paddleboard Yoga is offered (registration only) on the Catawba River’s flatwater.

Hyde started his career at the Whitewater Center as an intern more than 10 years ago when he was still in graduate school. Back then, his job was to help market programs and events — things like the River Jam concert series and the Build Your Own Boat competition where participants make handcrafted vessels and then race them down the channel.

It’s all part of the center’s goal to promote a lifestyle that goes beyond physical recreation. “Maybe people want to come out and grab a bite to eat and enjoy a concert with friends and family, or maybe they want to shop for apparel from a variety of outdoor brands,” Hyde says. “That’s why we’re here; that’s how we start and end our days: helping people engage with each other and with nature.”