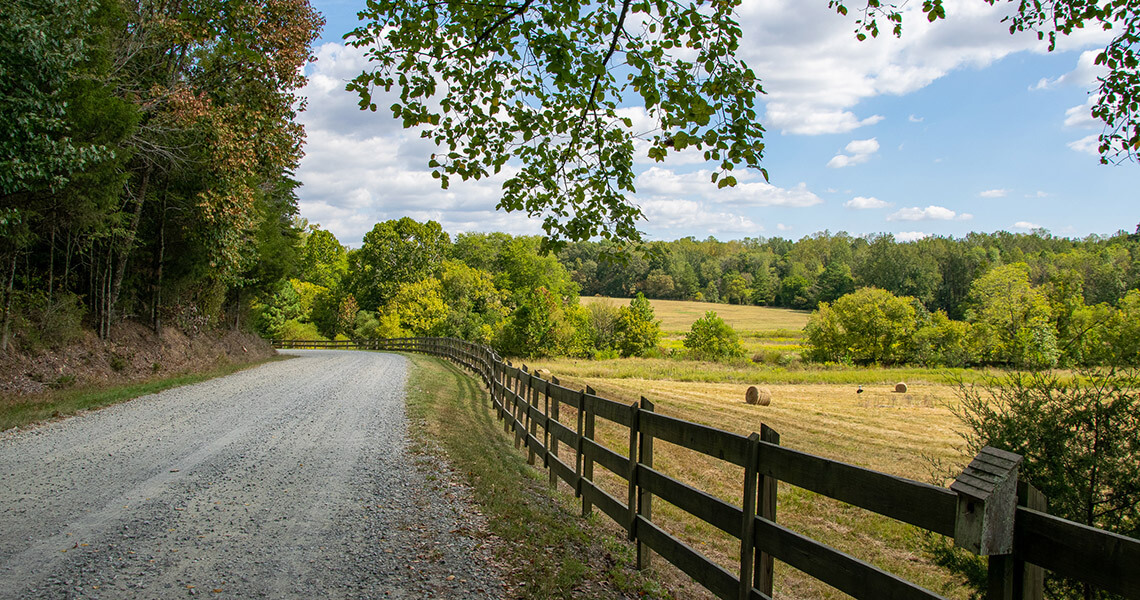 From the Foothills to the Sandhills, the North Carolina Piedmont is full of back roads and byways that are perfect for a relaxing drive. With views of mountains, rivers, farmland, and forests, plus great places to stop along the way, these seven drives will give you a reason to get behind the wheel and just go. 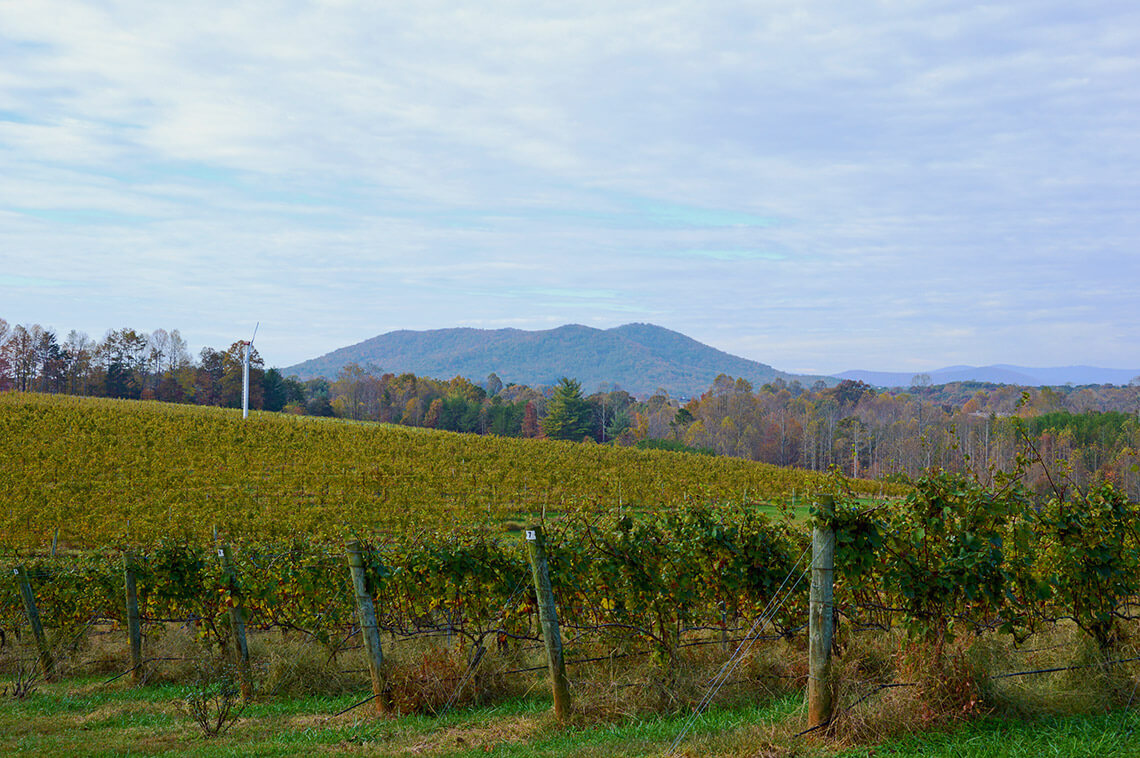 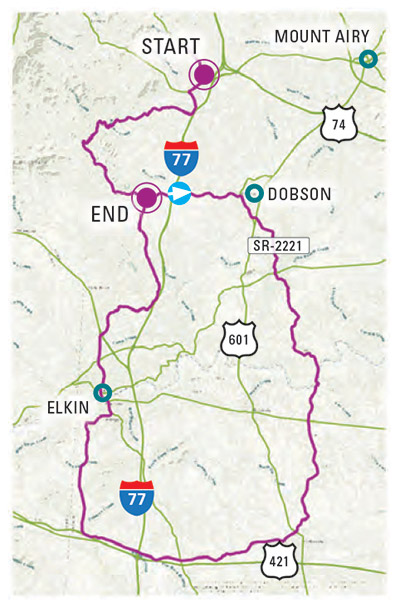 Beginning on NC Highway 89 at the intersection of Round Peak Church Road, this wine country byway rolls through farmland and foothills, over and along rivers, and past vineyards and historic structures, offering views of our iconic Pilot Mountain.

“The rolling hills, the traditional agriculture transitioning into the Yadkin Valley wineries — it’s a beautiful drive,” says Bobby Todd, executive director of the Yadkin County Chamber of Commerce. What’s Todd’s favorite part of the drive? “Oh gosh,” he says. “That’s like saying ‘What’s the best part of a pound cake?’”

South of the Yadkin River, the Swan Creek Wine Trail features six wineries — Dobbins Creek Vineyard, Shadow Springs Vineyard, Windsor Run Cellars, and Laurel Gray Vineyards — that take advantage of the microclimate and mineral-rich soil of the area between the Brushy Mountains and the river. At Laurel Gray, 10th-generation farmers Kim and Benny Myers, who formerly raised dairy cattle and grew tobacco, now grow French vinifera grapes with the goal of passing the family farm on to their descendants.

The N.C. Department of Transportation has designated 62 byways to give travelers an opportunity to leave the highways and experience North Carolina’s immense history, geography, and culture. Request the NC Byways Guidebook today to begin your journey! 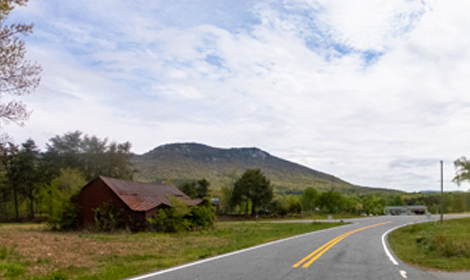 If you’ve got a sweet tooth, stop at Scoops Ice Cream & Such on Highway 89 and order a cone, milkshake, or sundae served out of a retrofitted Volkswagen van. Or hop out at Rockford General Store for a helping of peach, sweet potato, cherry, or berry sonker — a not-quite-pie, not-quite-cobbler treat native to Surry County. An annual sonker festival is held in Mount Airy on the first Saturday in October at the historic Edwards-Franklin House, built in 1799 by State Senator Gideon Edwards.

In Dobson, kids can enjoy playing in the splash pad in the summer or ice skating in the winter in Dobson Square Park. Year-round, the town of Elkin offers a kid-friendly, half-mile hike to Carter Falls. While several hikes will deliver you to the falls, the easiest starts from the Carter Falls Trailhead. After a hike, Harry’s Place will replenish your energy with old-fashioned Southern cooking, like fried chicken or barbecue sandwiches. 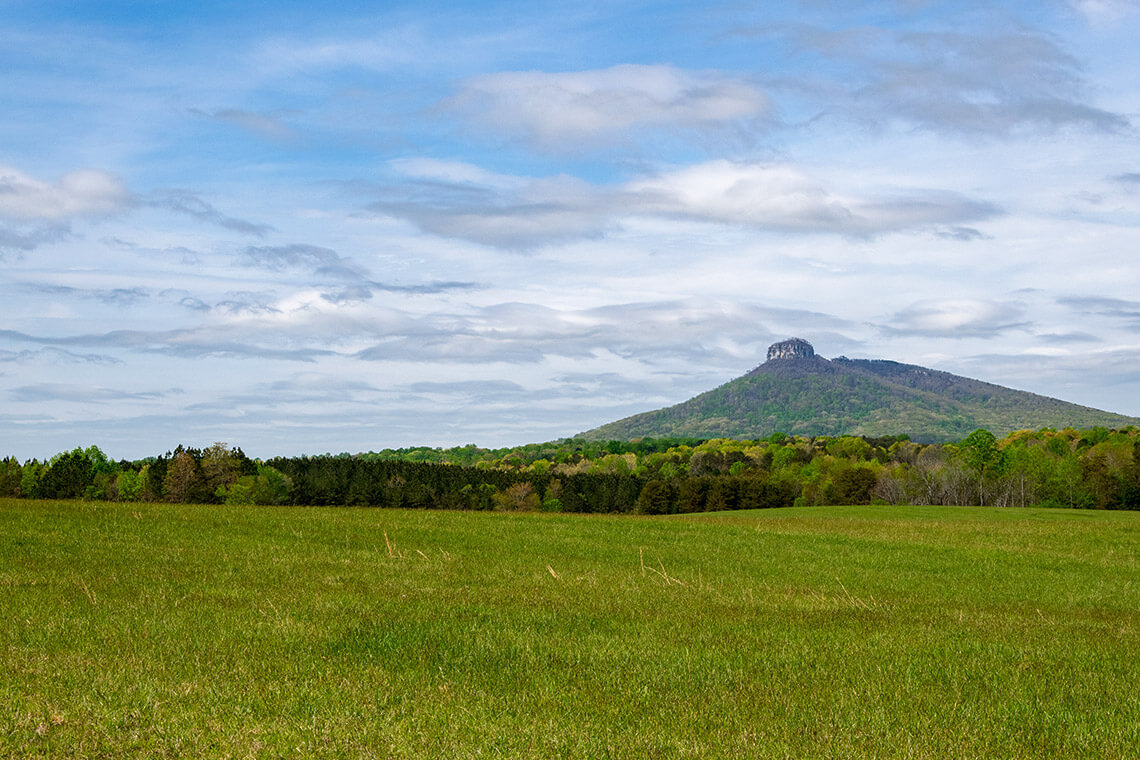 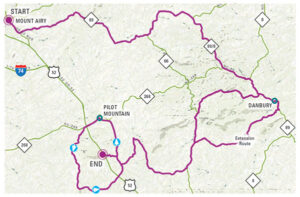 On Main Street in Mount Airy, fuel up for your drive with a pork chop sandwich at the nearly 100-year-old Snappy Lunch. Next, cruise around town in the back of a 1960s police car with Mayberry Squad Tours, led by an Andy Griffith Show aficionado. At the Mount Airy Museum of Regional History, listen to old-timey music and learn about the history of the area, including that of Native Americans and early settlers and of the largest open-face granite quarry in the world.

In Danbury, the antebellum Moratock Iron Furnace can be spotted from the byway. At Priddy’s General Store — a third-generation business operating in an 1888 building — stock up on homemade jams and old-fashioned candies. In the summer, go tubing down the Dan River with General Dan Tubing Company. Afterward, enjoy pizza, burgers, or pit-cooked barbecue at Dan River Family Restaurant.

At Hanging Rock State Park, west of Danbury, hike more than 20 miles of trails for views of Sauratown Mountain, the Devil’s Chimney rock formation, and multiple waterfalls, or climb to the top of the park’s eponymous quartzite rock formation. The park also offers mountain biking trails and rock climbing.

The byway then heads to Pilot Mountain State Park, where visitors can rock climb or rappel, ride horses on bridle trails, hike part of the Mountains-to-Sea Trail, or paddle on the Yadkin River paddle trail. Leaving the park, the byway loops around, ending with a spectacular view of the Pilot Mountain knob. 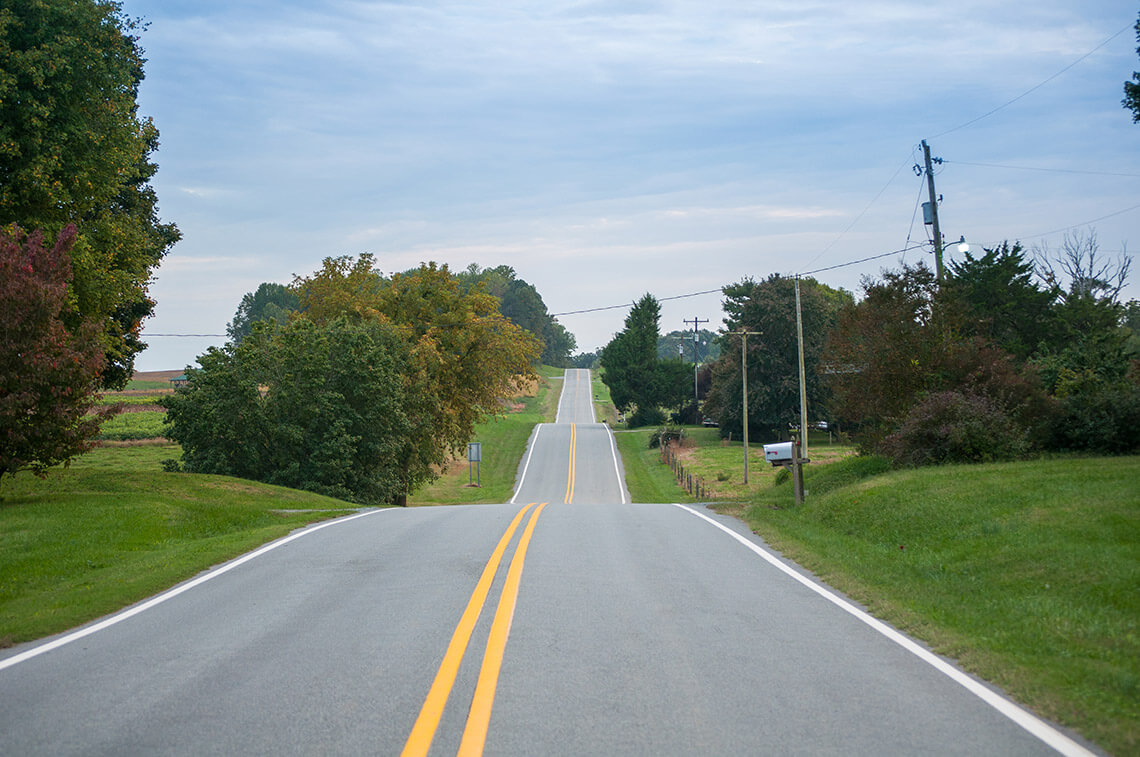 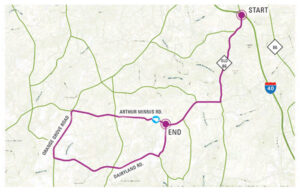 This Orange County route follows roads used by Native Americans and early pioneers, on land given from the King of England to Scots-Welsh Settlers in the 18th century. The byway offers hundreds of feet of elevation change, beautiful views of farmland, and a forest-lined gravel road featuring log cabins and historic farms.

“That drive is in an area that serves as a bridge between Hillsborough proper and rural Orange [County],” says Hillsborough Mayor Jenn Weaver. “You can see the beauty of the farmland that surrounds Hillsborough. And it also captures what’s so important to us about our local history, because it follows along the old Native American routes and the pioneer trade routes that historians in Hillsborough have put a lot of focus on documenting.”

Hillsborough offers something for everyone, from nature and history to art and literature to food and drinks. The visitor center is housed in the Alexander Dickson House, a circa-1790 Quaker farmhouse from which Confederate Gen. Joseph E. Johnston rode out to surrender to Union Gen. William T. Sherman during the Civil War. The 1.8-mile River Walk follows the Eno River near downtown, with signs along the way providing information on the history and nature of the area. Churton Street — the main drag — is lined with galleries like Hillsborough Gallery of Art, owned by local artists. Purple Crow Books on King Street dedicates an entire wall to local authors like Hillsborough residents Jill McCorkle to Allan Gurganus. And food and beverage options abound — like the Wooden Nickel Pub, which sources its meat from its own farm, and Yonder, a craft beverage spot featuring live music and local author readings.

At Maple View Farm Ice Cream, south of town, have a cone of butter pecan made with North Carolina pecans and dairy from the fifth-generation Maple View Farm. Like Maple View, many of the farms along the byway have been in use for generations. 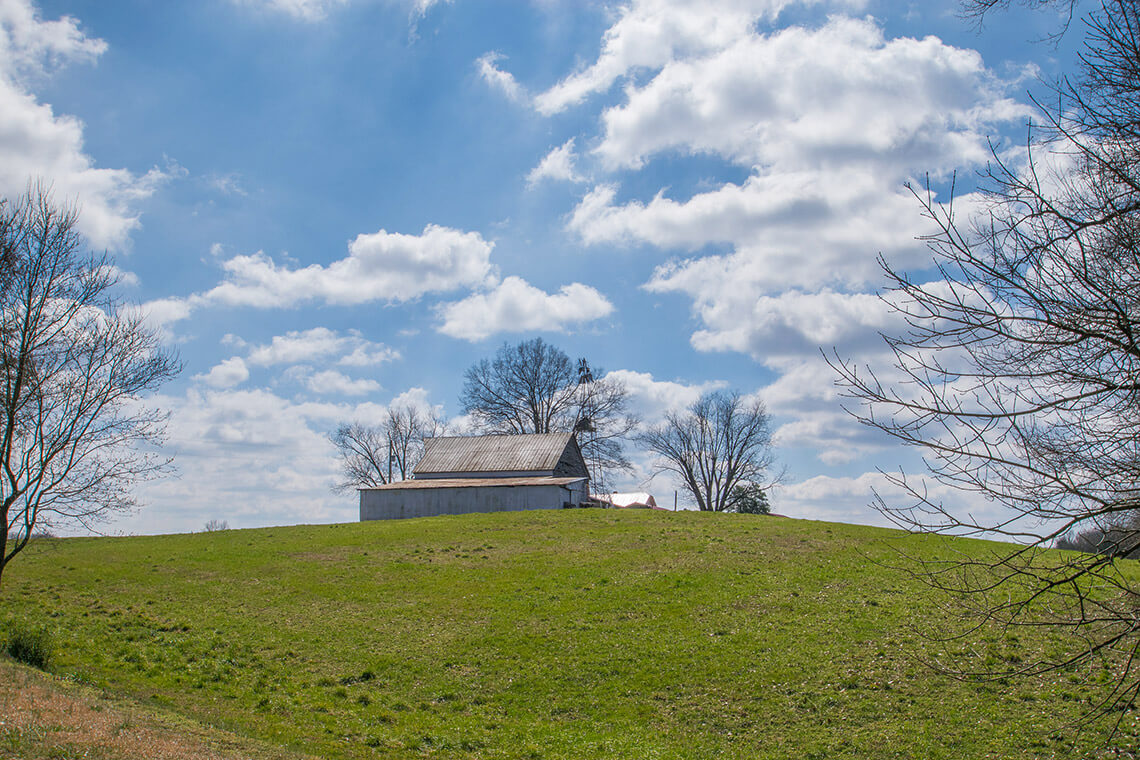 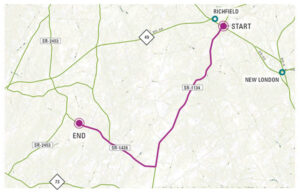 The hills, farmland, and windmills along this nine-mile drive through Stanly County give the Rolling Kansas area its name.

Starting in downtown Richfield, have lunch at Marli’s Grille, a restaurant in an old country gas station featuring a combination of Mexican and Southern foods, like arroz con pollo and pimento cheese dogs. Next, hop over to Main Street and stop by Southern Outdoors, a hardware and feed store that also offers housewares like cast-iron pans and canning supplies. 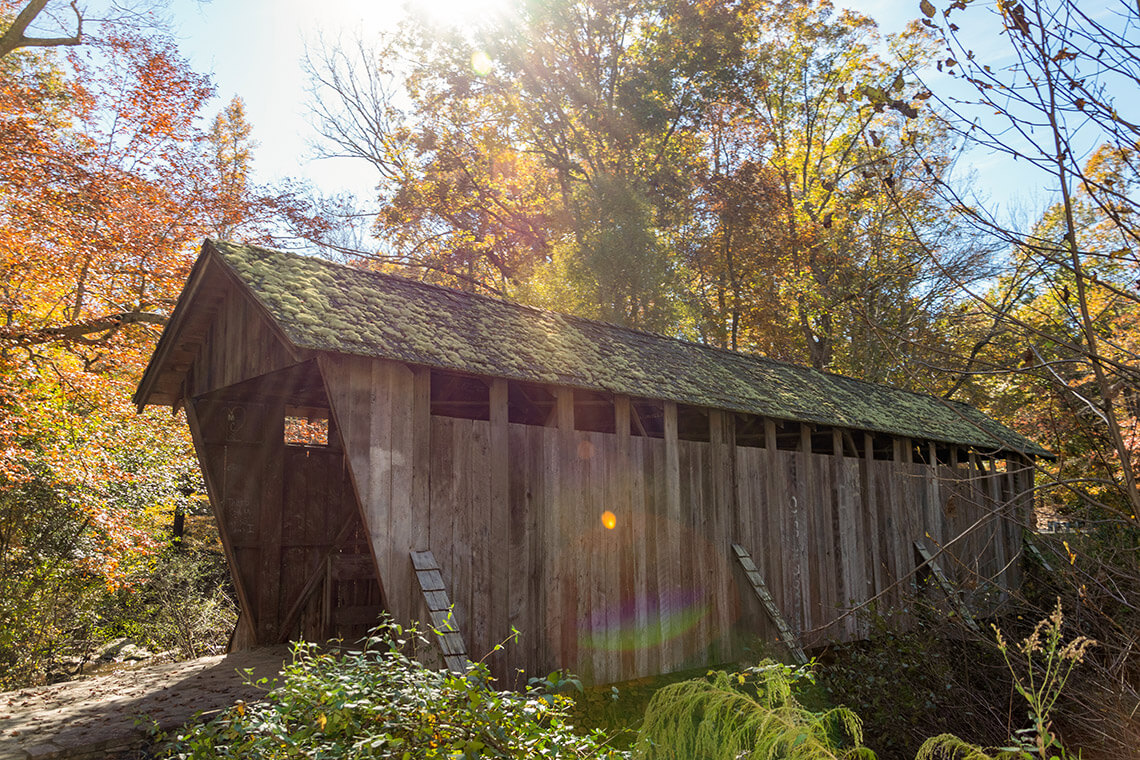 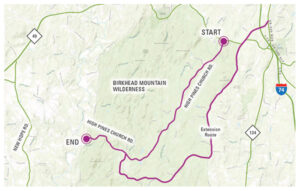 This 9.3-mile main route and its 12.5-mile extension traverse the Birkhead Mountain Wilderness, a remote segment of the Uwharrie National Forest in Randolph County. “Wilderness areas are preserved and have a ‘Leave No Trace’ policy,” says ranger Susan Miller of the Uwharrie Ranger District. “We can’t do typical management that we do in other parts of the forest, so it retains its wilderness nature.”

The byway passes through hardwood forests, pastures, and rock outcrops. Near Lassiter Mill, motorists can hop off the route and hop onto one of several hiking trails. Those taking the extension route will encounter the historic Pisgah Covered Bridge, constructed in 1911 and one of only two remaining public covered bridges in North Carolina. 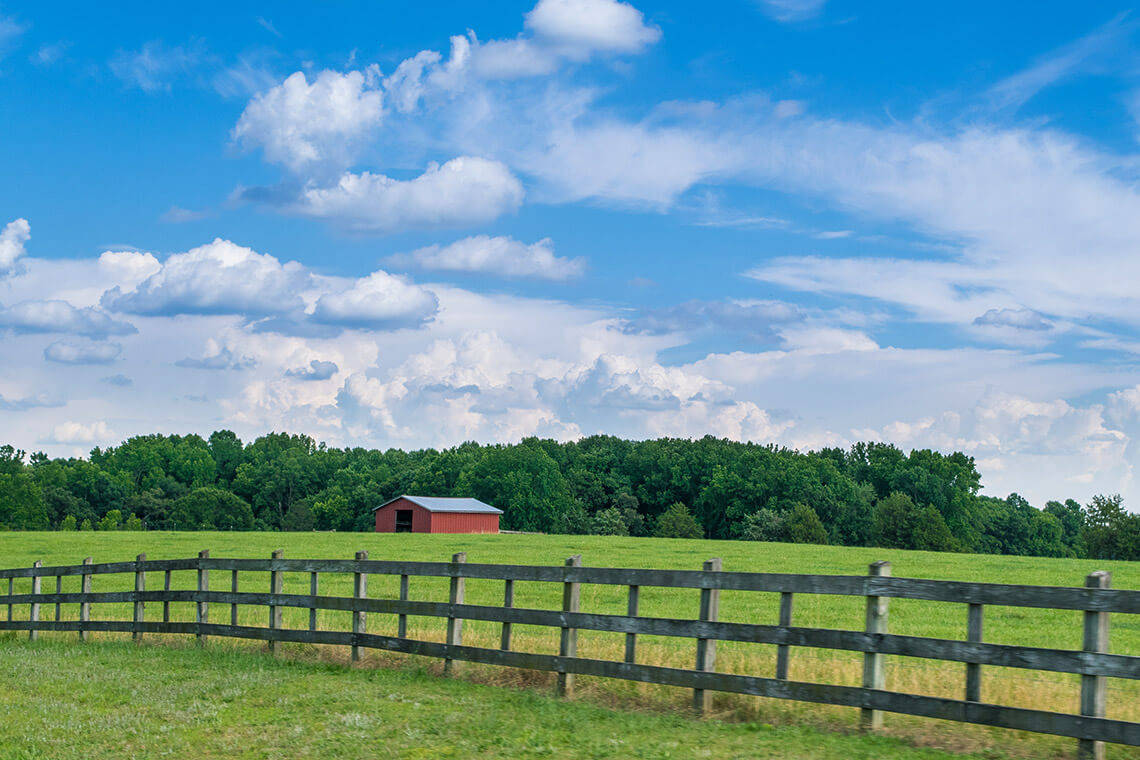 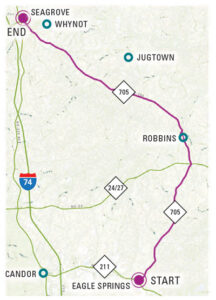 This scenic road takes travelers from the Sandhills to the central Piedmont through Moore and Randolph counties, landing at Seagrove, the heart of North Carolina pottery country.

Start the morning off with a round of golf in Pinehurst, then drive through Weymouth Woods Sandhills Nature Preserve, which features one of the few remaining stands of old-growth longleaf pines in the country. For lunch, have a hamburger steak at Blake’s Family Restaurant in Candor, a no-frills American diner, and an institution since 1947. Just a few minutes west of Candor, in Eagle Springs, the outdoor furniture store Sittin’ Easy features porch swings, gliders, chairs, and tables made from Appalachian white oak.

Heading north out of Eagle Springs on NC Highway 705, the first part of the byway is lined with old cedar trees. “You are in one of the most bucolic, pastoral places in North Carolina,” says Susan Dosier of the Heart of North Carolina Visitors Bureau. “At the right time of the year, you can see sunflowers blooming. You’ll see cattle grazing, you’ll see barns and farms and just small-town, rural living.”

In Robbins, the Bear Creek Trail System features 14 miles of trails along Bear and Cabin creeks. After a hike, Carolina Fried Chicken and House of Pizza is a great place to replenish your energy, and just northwest of town on the byway, Cagle’s Diner offers down-home cooking.

The closer you get to Seagrove, the more pottery shops you will see. In the 1700s, several potters from England settled in this area, and today their descendants continue the tradition. “If you want to immerse yourself in pottery, this is the place on the Eastern Seaboard to come,” Dosier says. “Wherever you stop, you’re going to find something that’s a surprise. You’re going to be able to talk with somebody whose hands may be making something right that minute.” There are close to 80 potteries near and along the byway, with more than 40 galleries, shops, and studios open to the public — like Seagrove Pottery Gallery right on Highway 705. Dosier recommends stopping at the North Carolina Pottery Center first for context on the craft story of Seagrove and the state. 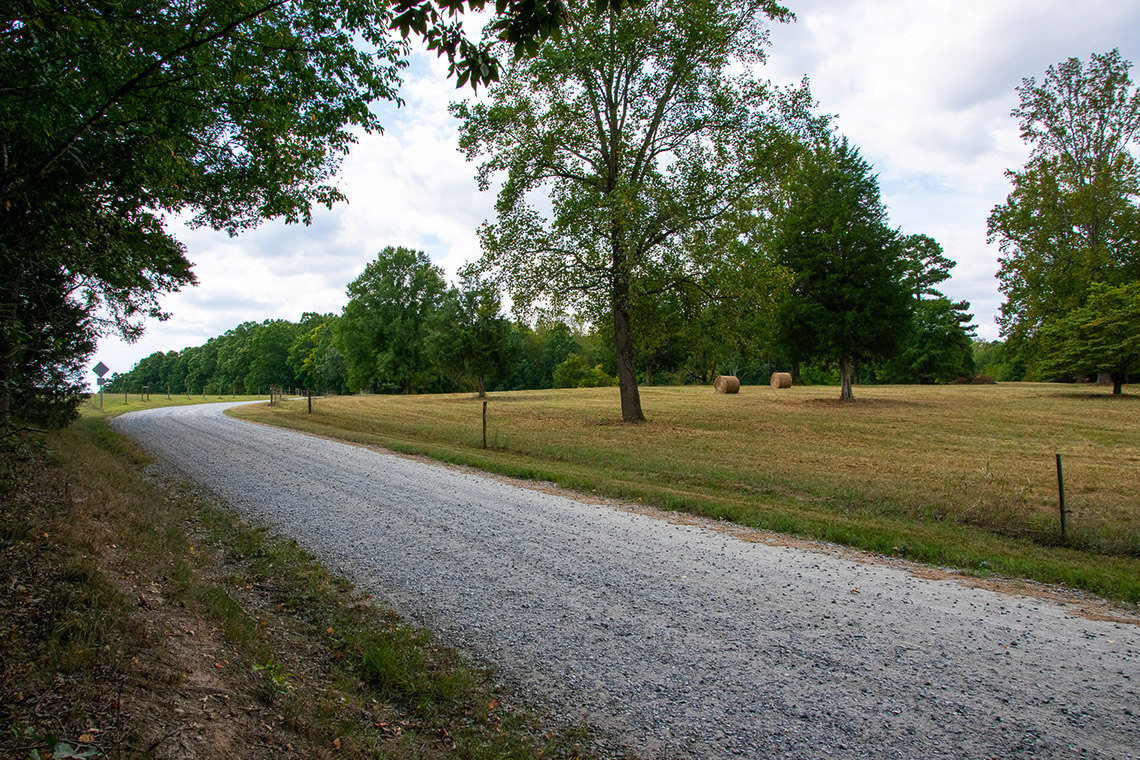 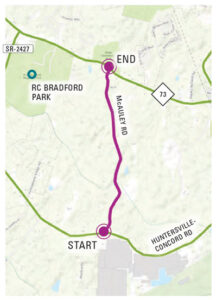 This 1.6-mile stretch of gravel road between Huntersville-Concord Road and NC Highway 73 takes drivers back to a time when Mecklenburg County, now largely metropolitan, was predominantly rural farmland and forests. Native plants and animals flourish in the 775 permanently protected acres surrounding the road, and deer, coyotes, wild turkeys, and other birds are often seen along the way. Fields, livestock, and historic farm buildings are interspersed with forested areas, and a one-lane bridge crosses Ramah Creek midway down the road.

Learn more about the scenic byways of North Carolina.