“We teach people to love the ocean because if they love it, they’ll take care of it,” says Taylor Maready, co-owner and lead instructor at Ecological Marine Adventures. Here, visitors become scientists and stewards of the ocean by learning about the delicate ecosystem of Topsail Island. At night, participants are given flashlights to find ghost crabs and record their discoveries. During the day, they can go stand-up paddleboarding during SUP + Science classes to understand ocean life and the physics of a wave. A “touch tank” aquarium immerses patrons in the local ecosystem through hands-on interactions with sea critters. Maready sees adults’ curiosity and excitement swell as they crawl across the sand and jump through waves to find crabs. “It’s the greatest day. It’s like they’re back to being 10 years old again.”

Baseball fans of all ages can visit the 1938 Fleming Stadium to get a lesson in North Carolina baseball’s past and present. With around 75 minor league teams, our state has a long relationship with America’s pastime. Packed into the 3,000-square-foot museum is a growing collection of some 6,000 baseball artifacts ranging from the familiar, like cards, jerseys, and bats, to quirky items — like a bag of peanuts grown on pitcher Gaylord Perry’s Martin County farm. That’s the beauty of a museum dedicated to an ever-changing sport, says Curator Marshall Lamm: “There’s always going to be more baseball.”

Weymouth Center for the Arts and Humanities — Southern Pines

The Moore County home of American novelist James Boyd still functions as a creative hub and community resource through the Weymouth Center for the Arts and Humanities — just as his family intended 100 years ago. Today, the center nurtures writers through its writers-in-residence program, poetry readings, and youth workshops. And visitors simply looking for inspiration can find it in Weymouth’s gardens, which are open from dawn to dusk, or the North Carolina Literary Hall of Fame — Boyd’s old study — while browsing pictures, biographies, and books from literary giants such as O. Henry, Pauli Murray, and Maya Angelou. So, do as the Boyds did: Spread out your picnic blanket, find a comfy spot, and get to writing. 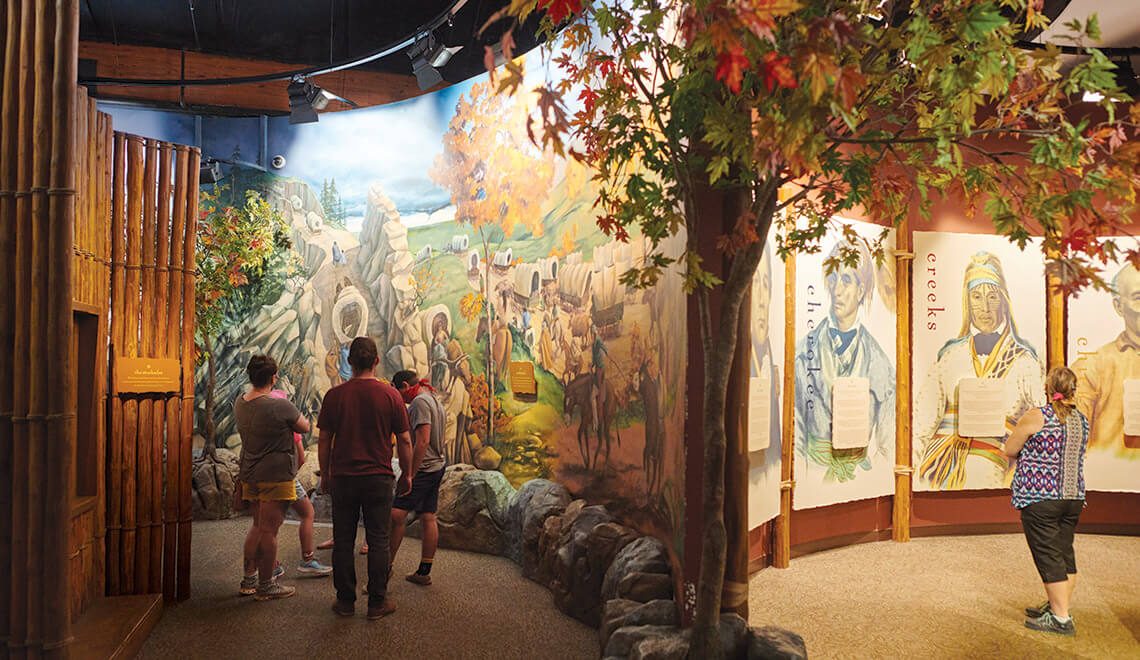 The Museum of the Cherokee Indian teaches visitors about the Trail of Tears, the forced removal of members of the Cherokee, Chickasaw, Creek, and Seminole tribes from their homelands. photograph by Jack Sorokin

Museum of the Cherokee Indian — Cherokee

After being greeted by a 20-foottall wooden sculpture of Sequoyah, the creator of the Cherokee syllabary, visitors at the Museum of the Cherokee Indian embark on a journey through the history of a proud nation. “There are many of us that may have gone to natural history museums and seen dioramas of Native people along with dinosaurs and rocks,” says Executive Director Shana Bushyhead Condill. “When our permanent exhibit was created, it was definitely innovative in that it was a story that wasn’t just stuck in time.” The main exhibit details 13,000 years of Cherokee history in the southern Appalachian Mountains, beginning with a creation story — how the Water Spider brought fire to earth — and carrying through the early 20th century. The museum uses holograms, life-size figures, archaeological artifacts, self-guided audio tours, and live artisans to demonstrate Cherokee traditions, arts, and storytelling. Condill wants visitors to walk away knowing that Native people are more than just the past: “We are still here, still thriving, still creating, and innovating.” 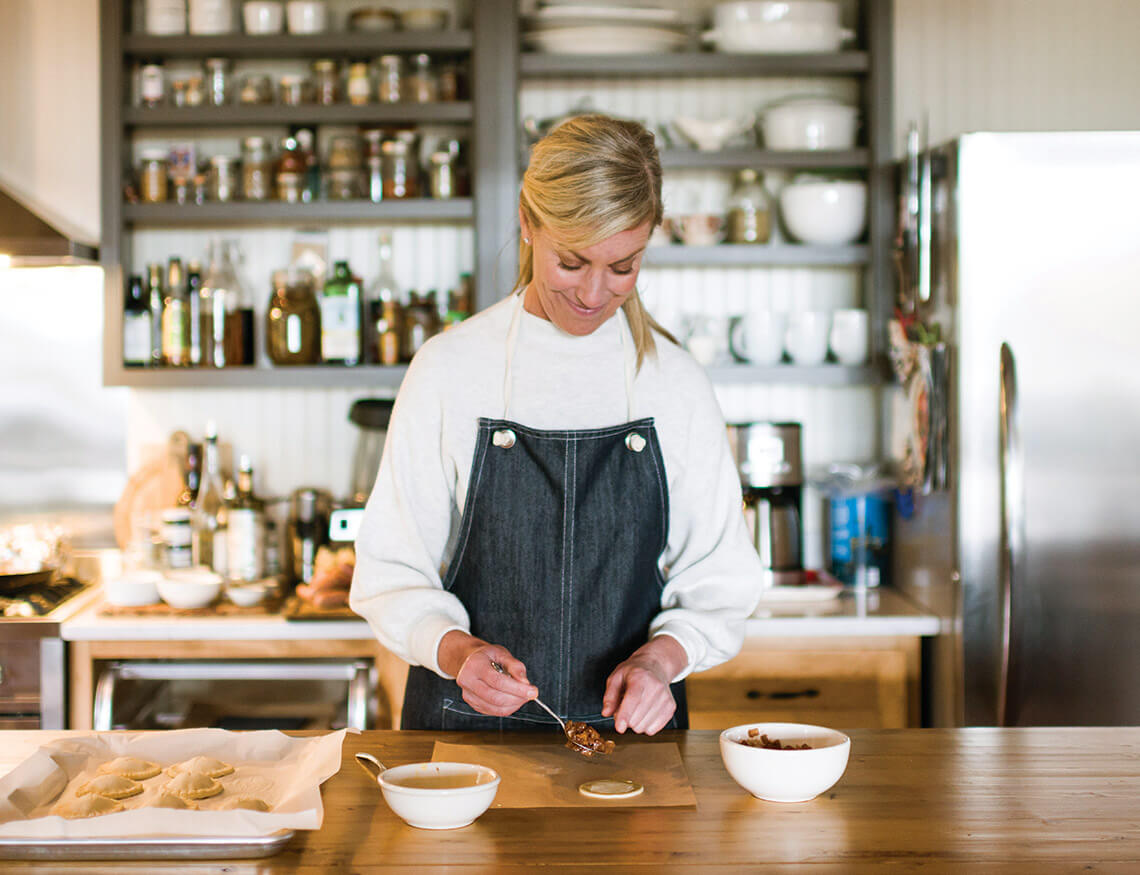 Kristin Jorgensen teaches cooks-in-training how to create delicious meals at The Barn in Cullowhee. photograph by CHELSEA LANE PHOTOGRAPHY

A class at The Barn often involves owner and instructor Kristin Jorgensen taking her cooks-in-training to the backyard to forage for edible mushrooms and wild greens to add to bowls of chicken and dumplings and hearty Tuscan dishes. Surrounded by blackberry bushes, apple trees, and trout-filled creeks, the historic barn, renovated by Jorgensen and her grandparents, is located down the road from Lake Glenville and hosts the four-hour cooking classes. Students can learn how to prepare homemade pasta, piecrusts, and roasted chicken at the kitchen island, then gather ’round The Barn’s dining room table or underneath a big oak tree to enjoy their creations. With help from nearby farms and local bakers like Sunburst Trout Farms in Waynesville, Winding Stair Farm in Franklin, and OWL Bakery in Asheville, Jorgensen’s public and private classes reinforce the mantra that cooking great food is simple when you start with good ingredients. 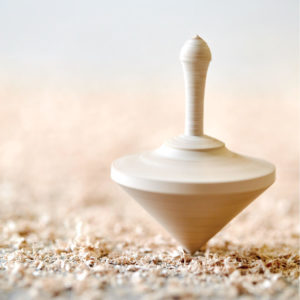 Whether you’re a skilled craftsperson or a dedicated hobbyist, anyone who enjoys creating can become a member at The Forge and use the space all year long. photograph by Joey Seawell

Surrounded by the sounds of sizzling sparks and whirring saws, folks taking classes at The Forge will learn hands-on skills using new machinery and tools. Founded in 2013, the makerspace occupies an old livery stable and offers project-oriented classes in wood turning, welding, pottery, and 3D printing. Memberships, class fees, and donations help support The Forge’s nonprofit work, which includes workshops for Greensboro youth and skill development for homeless and low-income community members. “As a tenet of our makerspace, we think that diversity is a prerequisite to creativity,” says Executive Director Joe Rotondi. Collaborating with people of different skill sets, age groups, and socioeconomic backgrounds encourages students to embrace new perspectives and feed their creative curiosity.

Each summer at Edgewood Cottage in Blowing Rock, High Country artists create and display artwork at the home of the late 19th- and early 20th-century painter Elliott Daingerfield. In 2009, the quaint wooden cabin was transformed into a gallery space, with Daingerfield’s original four fireplaces at the center and the porch serving as a studio for painters, fiber artists, and woodworkers. The history of Edgewood Cottage as a space for cultivating new and emerging artists goes back to 1895, when Daingerfield began teaching the “Paintin’ Ladies,” students from the Philadelphia School of Design for Women, during the summer. “The whole concept of sharing knowledge, mentoring, teaching, and learning was really alive before we started this program,” says Kadie Dean, chair of the artists-in-residence program. During the remaining months of the year, Edgewood Cottage is used as a museum and exhibition space.

Walking through the North Carolina Music Hall of Fame is like entering a doorway to performances by music pioneers and current stars. The hall features one of Elizabeth Cotten’s banjos, 9th Wonder’s DJ equipment, Jim Lauderdale’s 2002 Grammy Award, and more artifacts. From bluegrass and folk to gospel and pop, our state has made a name for itself in American music history: Each year, the museum inducts roughly 10 North Carolina-related artists and collaborates with some of them to create an exhibit, which is revealed at the annual induction ceremony in October. Executive Director Veronica Cordle says that the museum is an important reminder that you can come from anywhere — including a small town in North Carolina — and follow your dreams.