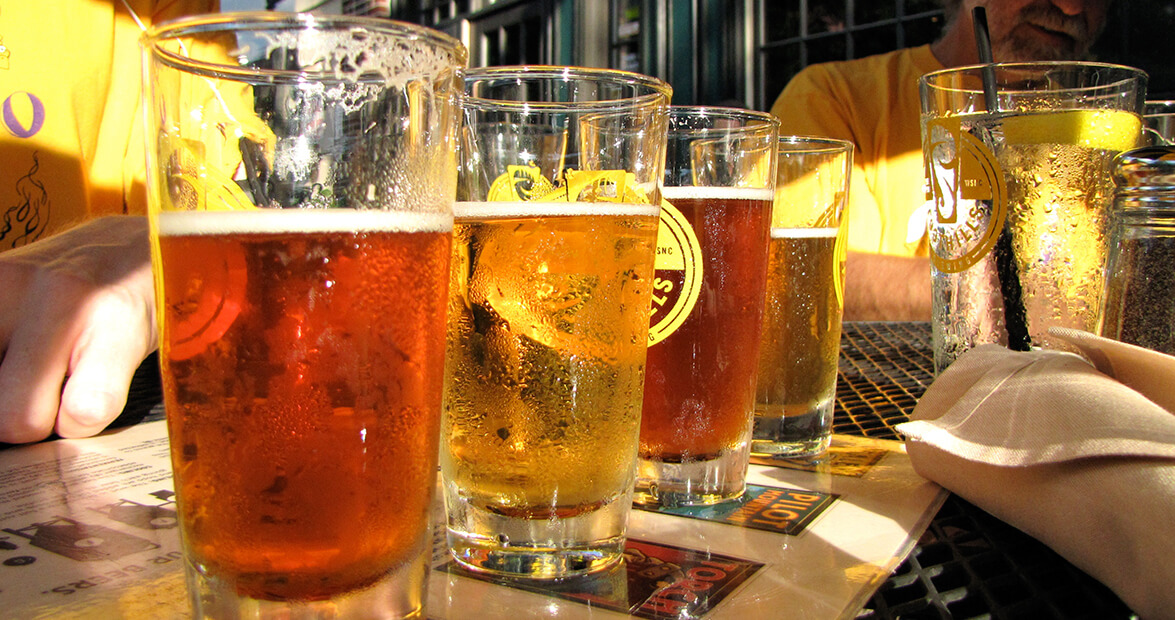 You may find yourself craving brews from the Tar Heel State’s renowned beer meccas of Asheville, Charlotte, the Triangle, and even Wilmington. But what you may not realize is there’s a secret craft beer destination to tap into: the Triad.

But there’s more to the area than just beer. Quaint downtown shops, well-maintained hiking trails, and top-notch eateries also await during a weekend trip to this hidden gem, in case you need a break in between pints.

Often overshadowed by its neighbors to the north, High Point has made its own small footprint on the craft beer scene. Begin your beercation at the Brewer’s Kettle, an intimate bottle shop and tasting room located at the corner of a small shopping center. Enjoy a flight of North Carolina brews in the relaxed atmosphere for a perfect start to the weekend.

Approximately 1.5 miles down Main Street is the city’s newest brewery, Brown Truck Brewery. It opened in February 2016, but has already become one of High Point’s hot spots. A beautiful outdoor patio and fire pit, rustic décor, live music, and homey atmosphere complement the tasty taps. The Imperial Farmhouse IPA is a must-try even if you’re not a fan of that style of beer, and the Belgian Honey Blonde was inspired by an unexpected batch of local honey. Expect new brews on tap all the time; you’d be hard-pressed to find one that doesn’t appeal to you.

Liberty Brewery & Grill, the city’s first brewery, is a five-minute drive away. It’s known not only for its libations (the DeBeen Espresso Porter is a local favorite), but also its juicy burgers and steaks that’ll fuel you up before your final stop of the night.

After sipping your way through High Point, head over to Jamestown. A visit to this area requires a stop at Potent Potables, a bottle shop with a seriously impressive tap selection and plenty of indoor seating. Plus, there’s almost always a food truck outside in case you’re in need of some late-night snacks.

If the weather is generous, start the day off with brunch outside at McCoul’s Public House. As you might expect, offerings include an American take on Irish classics, such as corned beef hash boxty — traditional Irish potato pancakes with corned beef hash — and an omelet with potatoes O’Brien.

After brunch, browse the charming local shops just around the corner from McCoul’s. Design Archives Emporium features crafts, vintage finds, and other North Carolina goods from local vendors, as does Just Be.

Farther south on Elm Street, a stroll past antique stores and art galleries will take you to Gibb’s Hundred Brewing Company. Gibb’s took home the gold medal from the 2015 Great American Beer Festival for their Guilty Party ESB, beating 66 other entries. If an extra-special bitter won’t satiate your taste buds, have a glass of their milk stout, Cherchez La Femme, or Whirligig, their Imperial Berliner Weisse that has just the right amount of tartness to it.

Back near McCoul’s, you’ll find Beer Co., a bottle shop and taproom. After trying a refreshment from one of their coolers or six taps, stop in at Natty Greene’s on the corner of Elm and McGee. This is the birthplace of one of Greensboro’s first breweries, with twelve regular taps and seasonal selections to choose from. On nice days, the outdoor patio offers the perfect vantage point to watch pedestrians stroll by as you enjoy their famous Buckshot Amber Ale.

Head north, past the Greensboro Grasshoppers baseball stadium, to Preyer Brewing Company. On a warm day, the hugely popular Strawberry Wheat is a refreshing seasonal treat, and the garage-style door will likely be open so you can enjoy the fresh air. The brewers here tend to experiment with wheat brews and also have ginger, peach, and other varieties. For a different taste, order the spicy Peppanero Habanero Pale Ale if it’s available, while hops lovers should try the Lewis & Krunk West Coast Style IPA.

Preyer shares a building with local culinary legend Chef Kris Fuller’s second restaurant, Crafted the Art of Street Food (a third location in Winston-Salem is in the works). The constantly changing menu is inspired by street food offerings from all over the globe; expect to see a gourmet twist on corndogs, delicious green curry with coconut rice and spicy, potato-filled samosas on the menu. Order through the window that connects Crafted and Preyer, and the bartenders will let you know when it’s ready, or go to the eatery yourself and choose from their impressive draft list, featuring many of North Carolina’s best beers. Once you’ve gotten your fill of international eats, head across the street to Greensboro’s newest spot for beer lovers, Joymongers Brewing Company, which specializes in small-batch offerings. In the summer months, snag a table on the patio, which has a great vantage point of the Greensboro Grasshoppers’ fireworks shows. When temperatures drop, grab a board game from the back of the room and gather up some friends for old-fashioned fun.

Farther north on Battleground is Pig Pounder Brewery, which has a large outdoor seating area and a window to the bar where you can order a drink without having to go inside. About a mile away, you’ll stumble across Gate City Growlers, a bottle shop where even the most frequent customers can always find something new to try off the 20-tap menu.

If the weather allows, run, walk, or bike around Salem Lake before starting your tour. A 7-mile loop will take you around the lake, where you might see people fishing, kayaking, or boating. It’ll make you feel a lot less guilty about your liquid calorie intake for the weekend.

Ask anyone in Winston-Salem where to eat, and you will likely hear The Porch. The Tex-Mex restaurant is located in West End Mill Works, a quirky spot that’s a melting pot of historic preservation and entrepreneurial endeavors. Hoots Roller Bar & Beer Co. is right next door to the restaurant. If you’re lucky, the Cucumber Cream Ale or the Cueberry will be on tap, both refreshing beverages with a hint of cool cucumber flavor. If it’s still too early in the season, give the WheelBite Wheat a try.

Winston-Salem has an exponentially growing arts scene, so there’s a good chance you’ll find an exhibit of local arts or music. Check out the Visit Winston-Salem, Winston-Salem Downtown Art District, and Arts Council websites to find out about any events or installations to see during your visit.

Two more awesome breweries are also located in downtown Winston-Salem. Foothills Brewpub, known for its Jade IPA, is located on West 4th Street, a few blocks away from Small Batch Beer Co on West 5th. You may have heard of Small Batch’s Mr. Lemon Man IPA, a slightly sour IPA with a touch of bitterness at the end, or its Percolator Stout – a deliciously coffee-flavored stout that makes for the perfect end to a weekend of beer tasting in the Triad.

Winston-Salem’s fourth brewery, Wise Man Brewing, will open at the end of of 2016 in the north end of downtown and feature 16 taps. For updated information about its grand opening, visit the brewery’s Facebook page.