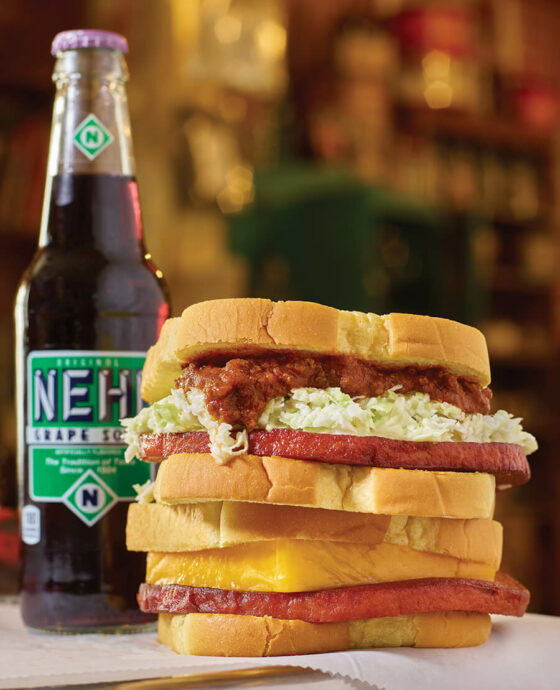 Built around 1890, Rockford General Store is, in many ways, a time capsule. Floorboards creak around the old-fashioned woodstove. Rocking chairs and benches for loafing line the front porch, overlooking the trains that pass by daily on the same tracks that brought passengers and freight to the historic village of Rockford 130 years ago. And a grill makes hot dogs, burgers, and sandwiches — including a nostalgic favorite, the bologna sandwich.

After lunch at Rockford General Store, customers can shop for nostalgic candy, kitchen supplies, and local crafts and books. photograph by Dhanraj Emanuel

Co-owner Pam Foy grew up eating bologna sandwiches that her mother made for her, but she admits with a laugh that Rockford’s sandwiches are “much better than Mom’s.” Served on potato bread with hoop cheese, mayonnaise, mustard, chili, or slaw, the “Rockford Steak,” as it’s known by regulars, pairs perfectly with a glass-bottle grape Nehi on a hot summer day. “It’s too big for my appetite,” Foy says. “The bologna is sliced half an inch thick. I have to eat half and save the other half for later.”

Such a hearty meal is the perfect fuel for a long motorcycle ride: Foy says that bikers make the trip to Rockford specifically for the fried bologna sandwich. Decked out in leather jackets, munching on a childhood staple, the bikers are proof that this trusty lunch standby transcends time and age. 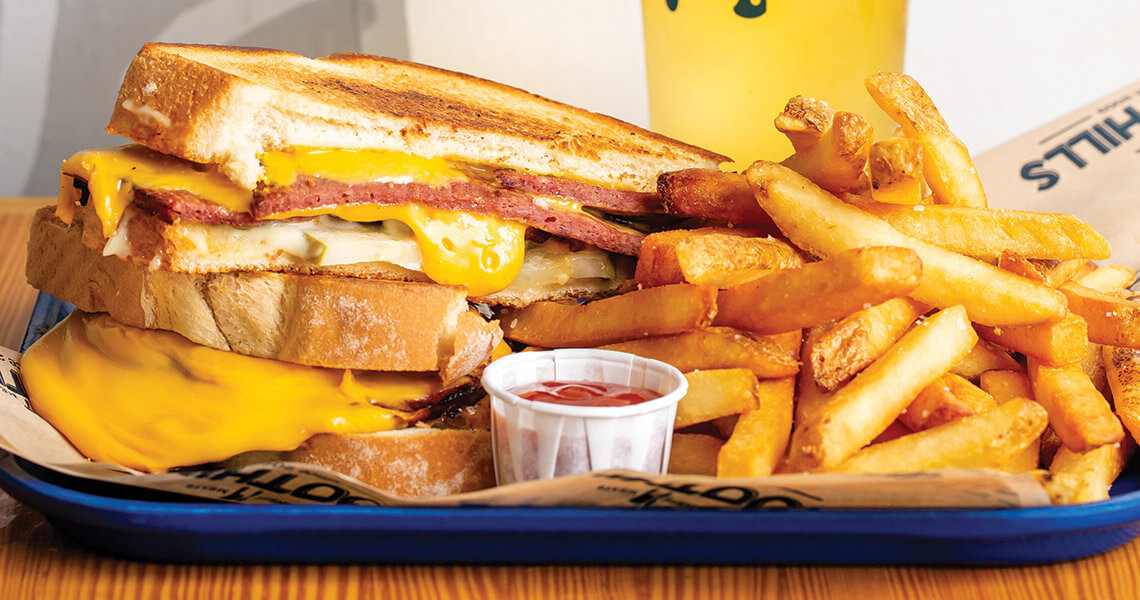 At Foothills Butcher Bar, today’s special is written on a roll of butcher paper: the bologna melt. Hearty beef-and-pork bologna, made on-site, is cut into quarter-inch slices, fried, and stacked double-decker style onto grilled Texas toast, then slathered with sharp American cheese, mustard, and Duke’s mayo. For weekend brunch, Foothills serves fried bologna on a biscuit, as well as bologna Benedict, topped with a poached egg and Hollandaise sauce.

Started at the local farmers market 20 years ago by owner Casey McKissick, Foothills Butcher Bar continues to pride itself on friendly service and ethically sourced meat. Between the restaurant and its two food trucks, Foothills goes through 30 pounds of bologna a week. In the restaurant’s open kitchen, McKissick renders beef tallow from the leftover fat, which he’ll use to deep-fry the restaurant’s chips, tater tots, and fries. McKissick and his wife have four boys whom he hopes will someday work at and eventually inherit the restaurant. For now, they help him raise pigs and crops on his farm. “They’ve grown up around all this food — my childhood food — which is fun for me,” McKissick says. “Bologna is childhood. Fried bologna meant someone else was making it for me.”

“We’ve been serving fried bologna since 1976,” says Michael Yarborough, third-generation owner of Yarborough’s Homemade Ice Cream & Grill. Started in the 1920s as Fairview Dairy by Michael’s grandfather Phil Yarborough Sr., this old-fashioned ice cream parlor and lunch spot takes pride in being family-owned — and family-inspired. “My mother would make me and my brother, Tim, bologna sandwiches when we came home from school or for lunch,” Michael says. “It’s a kids’ favorite, I think, besides peanut butter and jelly. There aren’t many people who don’t like bologna.”

Today, Michael and Tim serve their own bologna sandwiches at Yarborough’s, featuring a half-inch slab of fried bologna on a hamburger bun, topped with iceberg lettuce, tomatoes, and whatever condiments you like — an all-American take on a beloved sandwich that’s not so different from the ones their mom made years ago.