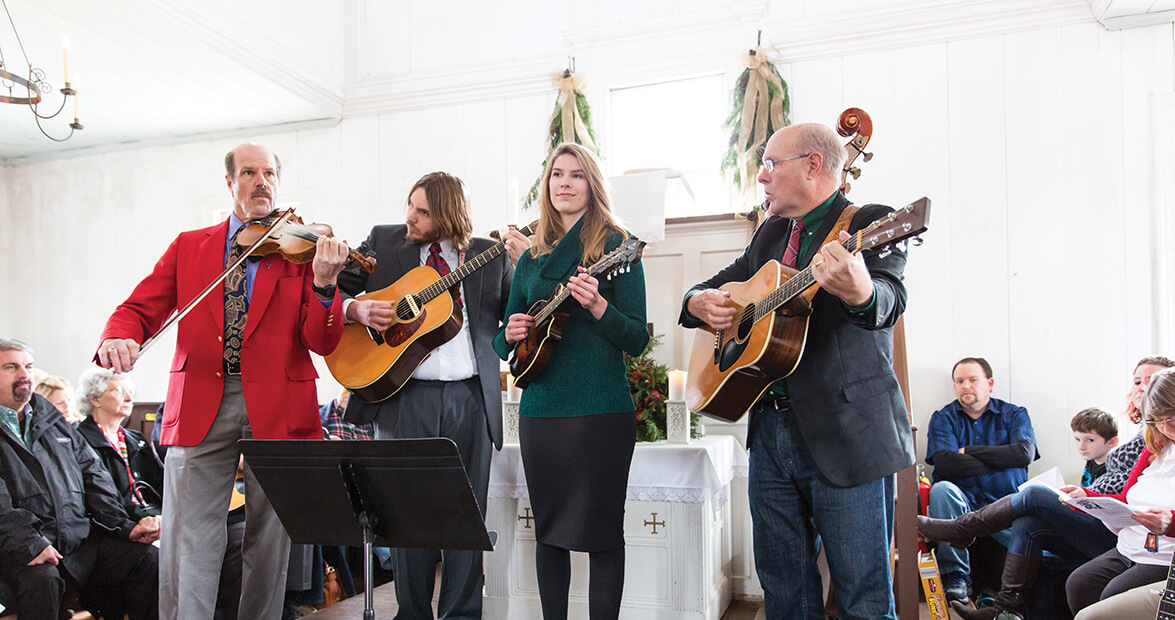 When Robert Sain needs to direct someone to his office, he says, “It’s the little white church on the corner.” But that doesn’t help much. People traveling between Newton and Conover and Hickory and Startown are forgiven for assuming that this tidy white building — no steeple, no heavy doors — is a historic home, or maybe a business. Squat and charming, it certainly looks like a local landmark, and indeed it’s featured in pictures hanging in restaurants and offices and B&Bs all over Catawba County. When people find out that the building is actually a 200-year-old church, the understated design becomes even more intriguing.

The Amish are masters of simplicity because their faith requires it, but when German and Reformed Lutherans settled in Catawba County and the Yadkin Valley, their lives were simple because the situation demanded it. And thus, so was — and is — the little white church known as Old St. Paul’s Lutheran.

A cemetery surrounds the church on three sides, but the dead buried there are the community’s dead, not just Lutherans. Indeed, soldiers from the Revolutionary War rest here; some headstones are so old that they’re only that — headstones. Names and dates were left off of these early graves due to superstitions. As for the church’s name: Why include “old”? (Even the black-and-silver state historic marker says so, as though the adjective has always been part of the name.) The reason, Pastor Sain says, is obvious when you consider the way congregations tend to grow and divide and build elsewhere. “Germans aren’t very creative,” he says, laughing. So when someone asked, “Where do you go to church?” he suspects the answer was, “St. Paul’s.”

Architecture buffs appreciate the building’s Federal style, but the rest of us see it as a tall, plain, wooden box. Inside, pews made from wide pine planks are upright and narrow. Men and women sat on different sides, with children in the women’s pews, which had a narrow slat at the base so that a mother could rest her feet to more easily hold a baby on her lap. Upstairs is less of a balcony than a second floor. Here, the pews have taller backs for more comfort during what was once a two-hour Sunday service. The corners of the backs are rounded from centuries of palms passing over them. 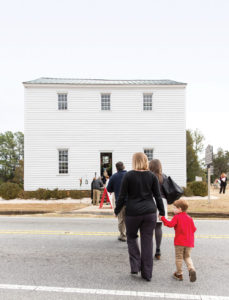 Last year, 300 people packed into the little church to hear bluegrass renditions of “Joy to the World” and other Christmas classics. photograph by Sara Wilson Coffin

The walls are white, the floors are unfinished, the windows are bare. The little white box of a building is simplicity itself. A box that gets opened, like a gift — a music box, perhaps — at noon on Christmas Eve.

Randy Sigmon is the keeper and historian who holds the old key — brass, heavy, six inches long — to this community treasure. He came here for Easter sunrise services as a child and helped form a Friends of Old St. Paul’s committee in the 1990s. He quietly resists requests from fellow parishioners to update the whitewashed interior with a real coat of paint: Whitewash is true to the church’s history. And if a section of the wooden floor gets flimsy, a piece of tin is nailed over it, just like the early members would have done.

At Christmastime, Sigmon takes on another role at the church. He’s a member of the Sigmon Stringers, a three-generation family bluegrass band that includes his brother, their combined four children, and their 85-year-old father. They have a cabinet full of music awards and honors, but nothing compares to playing at Old St. Paul’s. In 2011, after realizing that other services at which they performed — Memorial Day, Fourth of July, and the church’s fall homecoming — drew not just the church’s 125 communicants, but also the wider community, the Sigmon family decided to play at the Christmas Eve service, too. The tradition, which draws some 250 listeners, has continued. Newton families have made returning home to attend the concert part of their Christmas tradition. Last year, 26 states were represented at the service. No one misses the trumpets and harp, the grand red-and-gold decorations. Sprigs of pine tied with burlap set the right mood for a bluegrass service. 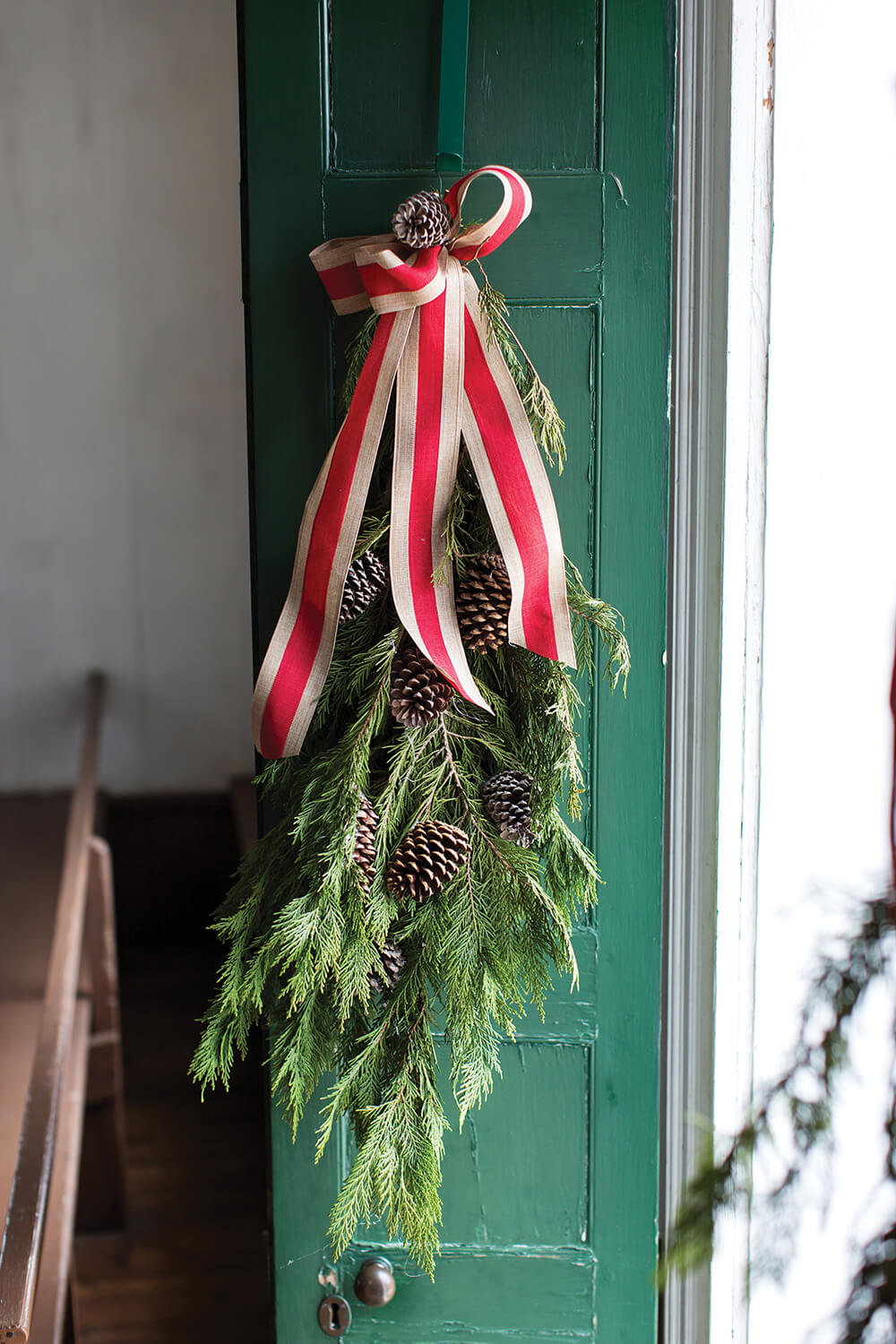 Sigmon says that what’s special about the church is “the way it sounds.” The musicians play without the benefit of insulation, rugs, acoustic panels, or speakers. “It’s like a 200-year-old fiddle, or a Stradivarius,” he explains. “As an instrument ages, it mellows.” The performers are mere inches away from the audience; the tall walls and clean airiness make for a pure sound.

Every denomination seems to have a change-the-light-bulb joke that illustrates the quirks of their practices. Sain tells the Lutheran version: How many Lutherans does it take to change a light bulb? Answer: Change? The original members of Old St. Paul’s were likely playing fiddles and mandolins at their Christmas services, too. The music reverberates just as it once did, and always will: simply joyfully.