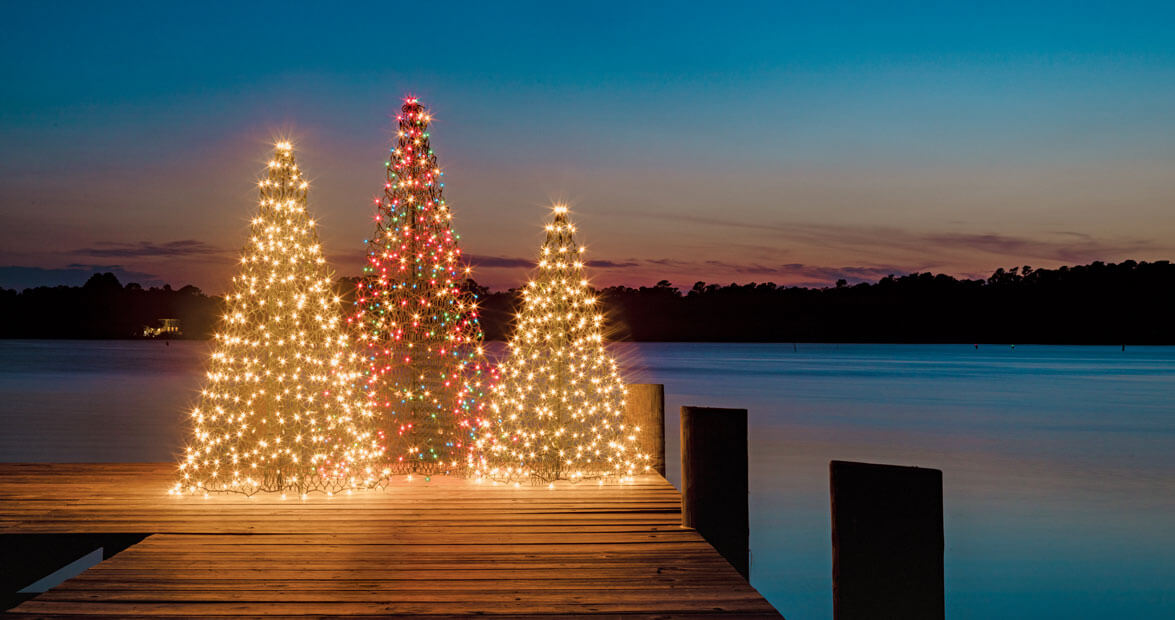 hen it comes to holiday traditions, the folks of Down East Carteret County take a back seat to no one. Sometimes, on Christmas Eve, the bridge tender on duty at the Harkers Island Drawbridge dresses up like Santa Claus and stands at the side, waving at drivers headed home for clam chowder and charcoal mullets, fig preserves, and pound cake. If the wind off Core Sound has a sting to it, someone will remark, “It’s cold as the night of the Crissie Wright,” referring to a schooner that ran aground at Shackleford Banks in the winter of 1886.

Down Easters treasure their connections to holidays past, but that doesn’t mean they’re slow to adopt a new tradition — especially if it’s the invention of a native son like Nicky Harvey, the former commercial fisherman who for more than 20 years operated Harvey & Sons Net and Twine in the soundside village of Davis. In 1999, using the coated wire mesh used to make crab traps, he created Core Sound Trees, a Down East tradition that has spread from Harkers Island to Long Island, right on down to Florida, and as far as Washington State.

Better known locally as “the crab pot Christmas tree,” Harvey’s creation is beautiful and practical, and looks right at home indoors or out. Made to fold flat for easy storage, the trees are sold pre-strung with the option of white or colored lights. Additional decorations, like ornaments or garlands, can also be added. Down East, people often use sand dollars, colorful floats, or even sections of net to decorate the “tree.” Made from materials that hold up for at least five years, even with a daily dunking in saltwater, the Core Sound Trees are incredibly durable.

On the sound side, people and their traditions are made to endure. Like most of his neighbors, Harvey has seen his share of hard times, the nor’easters and hurricanes. He’s seen the commercial fishing fleet of Carteret County changed by 21st-century economics. But, like generations of Down Easters before him, Harvey has adapted. After all, the first Europeans to settle permanently at Cape Lookout were 18th-century whalers. Their descendents reinvented themselves as boat builders, fishermen, and life-savers. Perfectly natural, then, that Harvey would reinvent himself as a crab pot Santa Claus. 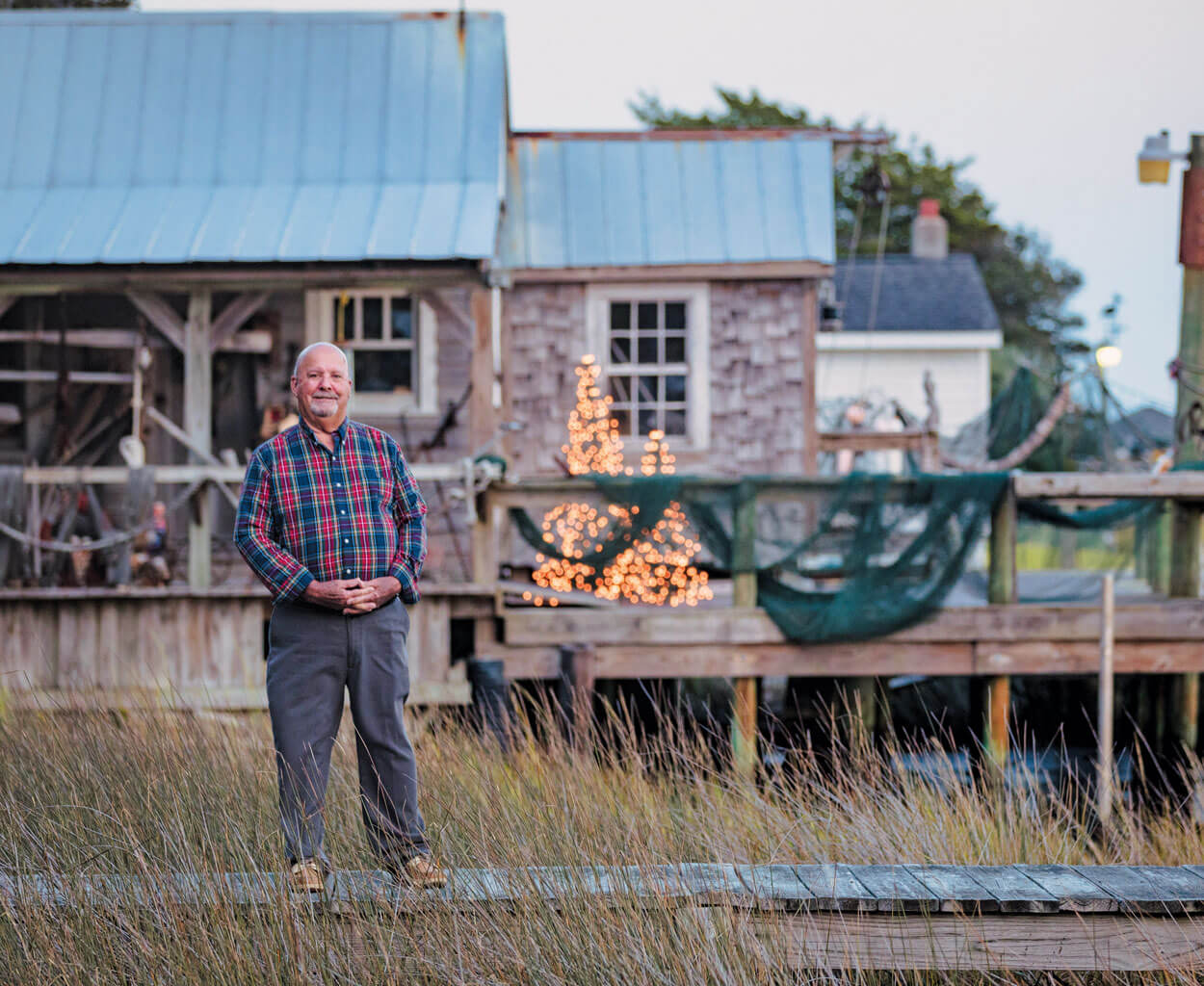 Nicky Harvey was a commercial fisherman for 20 years. Then he created the crab pot Christmas tree. photograph by Baxter Miller & Ryan Stancil

The story behind Core Sound Trees is the stuff that holiday movies are made of, beginning with the stocky figure of Harvey himself, who is balding and beardless, yet still somehow Santa-like. Harvey once owned a trawler, but in 1981 he finally got tired of fighting the weather, governmental regulations, and a merciless seafood market. He quit commercial fishing and opened Harvey & Sons Net and Twine, just down Core Sound from his hometown of Atlantic.

“We started out selling nets and trawls,” he says. “When that market went bad, we started making crab pots. Now,” he says with a shake of his head, “the crabbing is terrible.” Producer statistics back him up: In the last 20 years, North Carolina has gone from 43 crab processors to fewer than a dozen.

“It got tough selling crab pots,” Harvey says, “so we started working at getting this tree business going.”

But how did a commercial fisherman start marketing artificial trees? The answer begins with the evolution of those deceptively simple-looking wire cubes used to catch blue crabs. The first metal crab pots were made from plain galvanized chicken wire and they were quick to rust. Soon vinyl-coated wire became the standard. Like the Model T, the first coated traps were black. Then green became an option, followed by red and then yellow.

Like all watermen, crabbers are a superstitious lot, eager to grab any advantage, real or imagined. Over time, the popularity of different crab pot colors has changed with the same sort of logic that drives teenagers’ fashion trends.

Green wire has long been the standard color, though — which could account for the flash of genius that inspired the crab pot Christmas tree. Of all the thousands of people who have worked with green-coated crab pot wire, it was Harvey who saw that it could be cut into triangles and made into a tree. In 2004, he successfully patented the design.

“The important thing,” he says, “is that we came up with a way to make it fold flat.” The crab pot tree does indeed fold up with the lights still attached — and not just for easy storage. Some people choose to display their trees only partially unfolded. They open them halfway and put them against a wall as “half trees.” Open only 90 degrees, a tree may fit neatly in a corner. 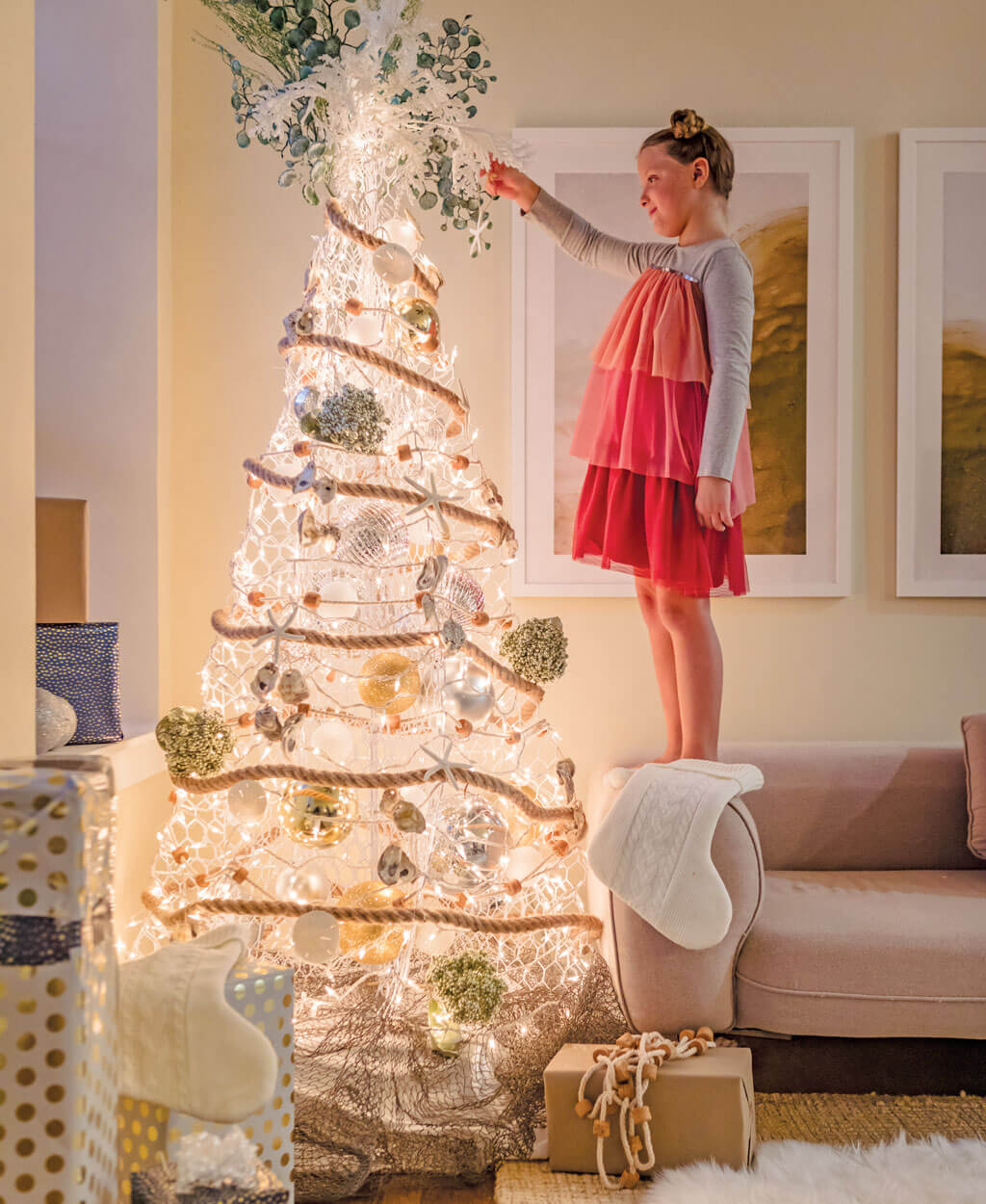 What do you put on top of a crab pot Christmas tree? A starfish, of course. photograph by Baxter Miller & Ryan Stancil

In 2009, Harvey sold the manufacturing and distribution rights for his crab pot Christmas trees to Fisherman Creations, Inc., down the road in Smyrna, and today, his Core Sound tradition endures: Each year, the company sells more than 10,000 handmade trees.

But there’s one unsolved mystery in this holiday tale. How did Neal Harvey earn the nickname “Nicky”?

“I’ve always been called Nicky,” Harvey says. “How they got Nicky out of Neal, I’ll never know.”

Well, isn’t it obvious? A mere Neal couldn’t invent his own Christmas tree. But a St. Nicky might be destined to do just that.