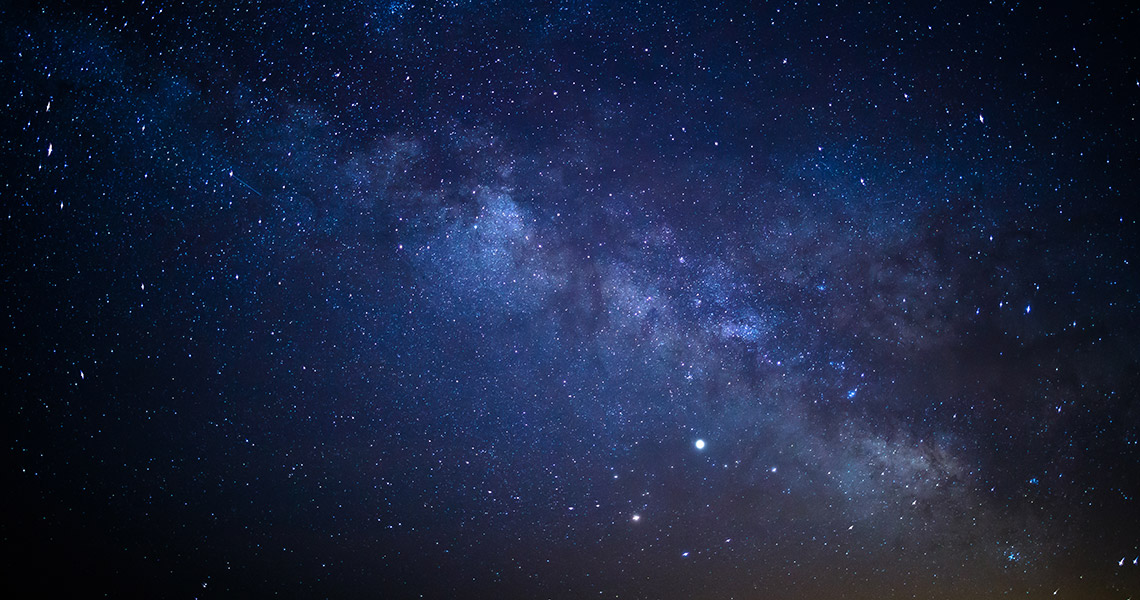 I was a space geek as a kid. I grew up in rural North Carolina, where there was very little light pollution — the only things that lit up the night sky were the stars and the Moon. I would crawl out of my bedroom window at night, lie on my back on the low roof over our porch, and pick out the constellations. Sometimes I could even see the Milky Way. I dreamed of becoming an astronaut one day.

Life had other plans for me. I grew up, moved away from home, and lived in bigger cities. I didn’t have so many opportunities to look up. So when I found out about the new Glenn & Carol Arthur Planetarium at Mayland Community College’s Earth to Sky Park outside of Burnsville, I jumped at the chance to check it out.

Enjoy the wonders of the universe during the day in the Arthur Planetarium or under the stars overhead at the Bare Dark Sky Observatory. Come explore all the Earth to Sky Park has to offer. 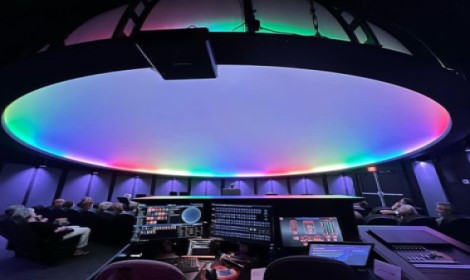 I had been to the Bare Dark Sky Observatory at the park before and was in awe of the things that I could see — galaxies! nebulae! — through their telescope, the largest of its kind dedicated to public use in the Southeast. The park’s designation as an International Dark Sky Place meant that, due to minimal light pollution, I could see tons of stars that I couldn’t see at home in the Triangle area.

But while visiting the observatory is an incredible experience, it’s very weather dependent. Mayland wanted to offer another option for people who traveled to Burnsville from all parts of the state — and from around the country — to see the stars: Their brand-new 60-seat planetarium just opened this year.

When observatory shows are canceled due to weather, the planetarium features “live sky” shows, in which a staff member punches the GPS coordinates of the Earth to Sky Park into the computer, and the night sky that’s immediately above the park appears on the dome. Viewers can see the same objects that they would see at the observatory — galaxies, nebulae, planets, and star clusters — but while most things would appear white or gray through the telescope, the planetarium can show objects in vibrant color. The shows can also take viewers back in time, demonstrating how the night sky has changed over thousands of years.

But you don’t have to wait for cloudy skies to enjoy the experience. The 36-foot dome also offers regularly scheduled shows on topics both space- and non-space-related. Today, I’ve decided to see Expedition Reef, an underwater exploration of our ocean’s complex and biodiverse reef ecosystems. 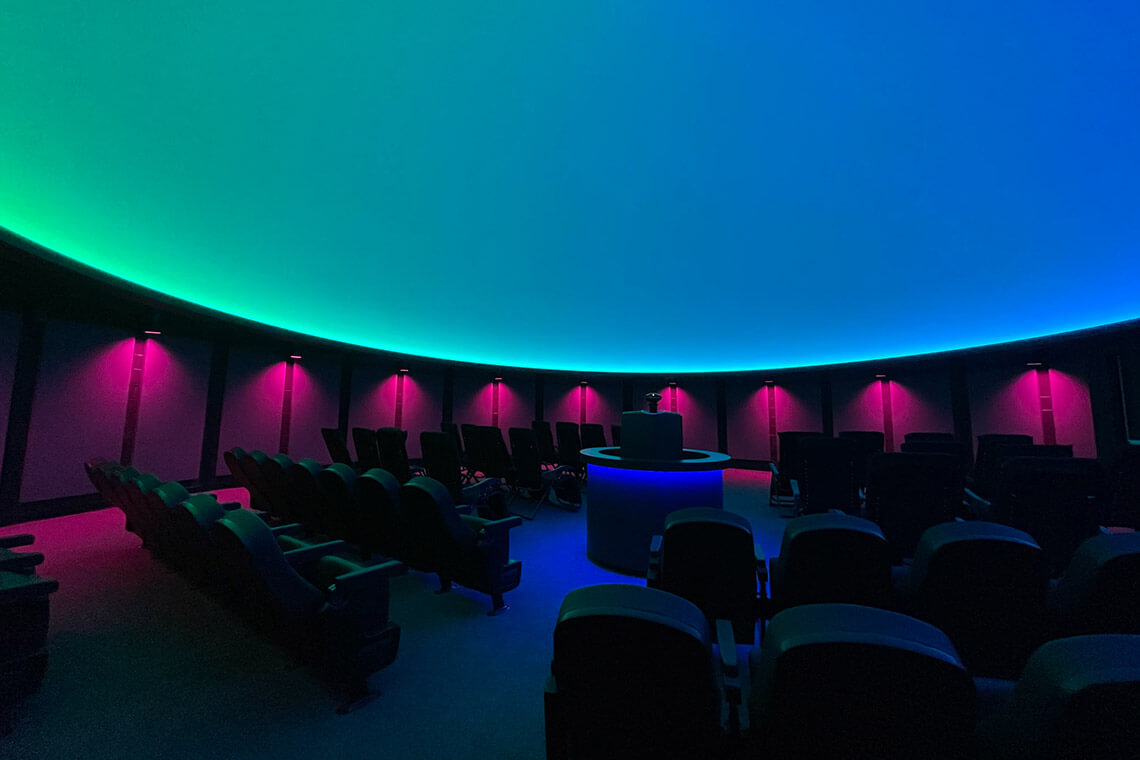 When I arrive at the planetarium, I settle into my zero-gravity chair and lean all the way back, until I’m practically horizontal. I feel weightless, like I’m floating, and this combined with the 360-degree video projection overhead creates a truly immersive experience. As the video on the dome dives underwater, showing brightly colored coral and crabs, fish, and other sea life that depend on the reef for survival, I almost think I’m swimming along. When the video zooms out to reveal the entire planet, highlighting the parts of the globe where reefs are found, I feel like I’m flying in space.

Every show ends with a staff member walking viewers through the night sky. When Expedition Reef is over, Manager Michael Hardy pulls up the evening sky on the dome, setting the time to just before sunset. As we watch, the sun goes down, and the stars come out.

Hardy starts by pointing out a familiar sight: “The Big Dipper is something that everybody knows,” he says, as white lines connect the seven bright stars that make up the bowl and the handle. “But it’s not really a constellation. We call it an asterism” — a group of stars that form a pattern but are not considered a constellation. The Big Dipper is actually part of the constellation Ursa Major, or the Big Bear. Hardy explains that the Big Dipper can be seen in our part of the world at any time of year. “It’s one of those really cool things in the night sky that we get to see on a regular basis because it’s circumpolar,” he says, meaning it orbits Polaris, the star that sits directly over the North Pole. 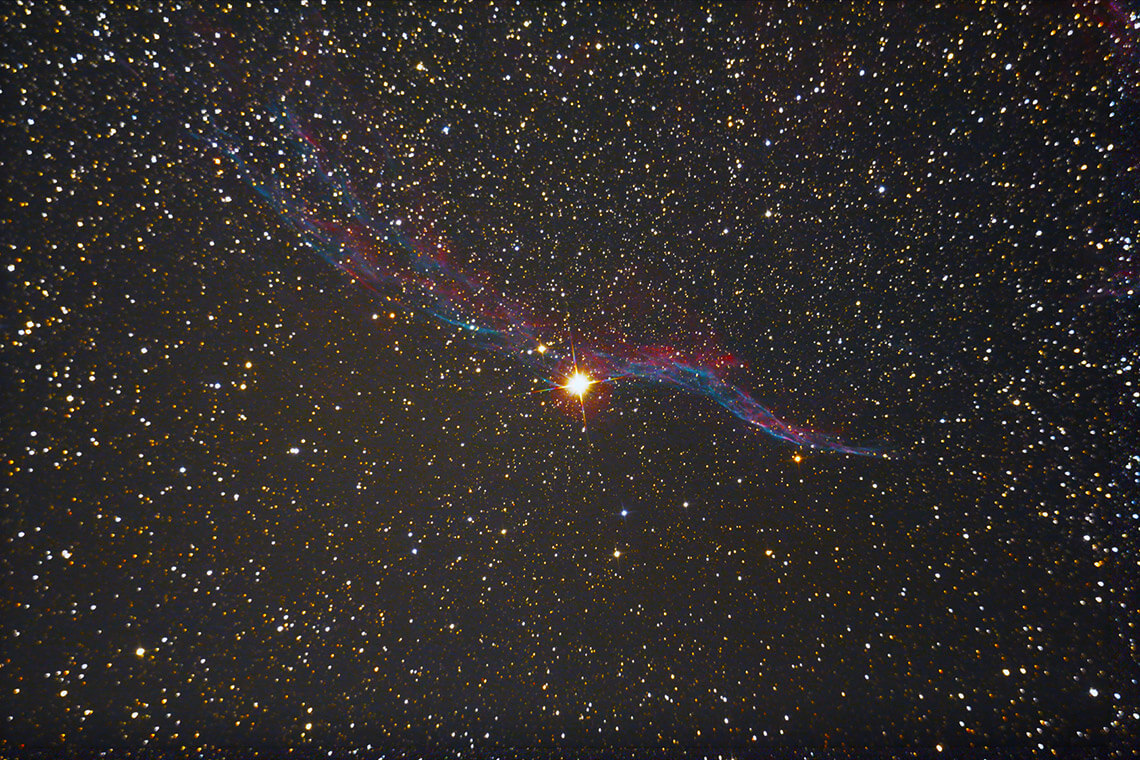 See supernova remnant’s like the Veil Nebula at the Earth to Sky Park’s planetarium. Photography courtesy of Mayland Community College

Hardy continues, pointing out the constellations Hercules and Draco the Dragon. He tells the story of Hercules picking up Draco by the tail and flinging him into the sky, where he still resides today. “There are stories in just about every culture about how these constellations got up there,” he says. “It’s amazing how many different cultures, whether it be the ancient Romans, the ancient Greeks, or the Navajo, all have similar stories.”

The image on the dome then zooms through space — my zero-gravity chair suddenly feels like a rocket ship — to the Great Globular Cluster in Hercules, a star cluster located in the Hercules constellation that includes several hundred thousand stars in a 150 lightyear-diameter region of space. At the center of the cluster, more than 100 stars could be crammed into an area just three lightyears wide. For perspective, our Sun is more than four lightyears from its closest star neighbor. “It’s amazing to think that every one of those stars inside of that cluster could have planets,” Hardy says. “And every one of those planets could have life of some type out there.”

As the show comes to a close, we fly back to Earth, and I begin to think about life on our own planet. Today, I learned that coral reefs support a quarter of marine species, although they cover less than one percent of the area under the sea. What’s more, half a billion people depend on reefs for their food and livelihoods. They also protect the coast from hurricanes, typhoons, and cyclones by dissipating wave energy before it reaches the shore. But our reefs are dying due to climate change, overfishing, and pollution. That’s why environmental education is so important, and it’s one of the primary missions of the Earth to Sky Park.

In addition to the observatory and planetarium shows, the park features hydroponics and aquaponics systems in its greenhouse, used to teach visitors that greenhouse-grown food can be more sustainable than field-grown food. There’s also a new pollinator meadow, in the shape of a giant butterfly, that was seeded earlier this year. The park staff hopes that the meadow will attract pollinators that are native to the region — like synchronous fireflies that flash in unison. The park has also installed a hive for mason bees, with plans to also install honeybee hives and teach beekeeping classes, “because bees are critical pollinators for our globe,” says Earth to Sky Park Coordinator Blair Belt.

The planetarium features a mural of a beehive that wraps from the building’s exterior to its interior, with the queen bee in a prime location just outside the entrance to the theater. The mural was painted in exquisite detail — down to the little hairs on the legs of the bees — by artist Matt Willey, who is on a mission to paint 50,000 bees around the world as a symbol of the connectedness of all things, a project he started in Asheville. Just as the hive is interconnected, human beings are linked to each other and to every other living thing on Earth — a key lesson that Mayland aims to teach visitors to the park.

One more surprising thing that I learn while at the park: Bees’ circadian rhythms are dependent on the dark — further evidence that everything truly is connected, from the Earth to the sky.