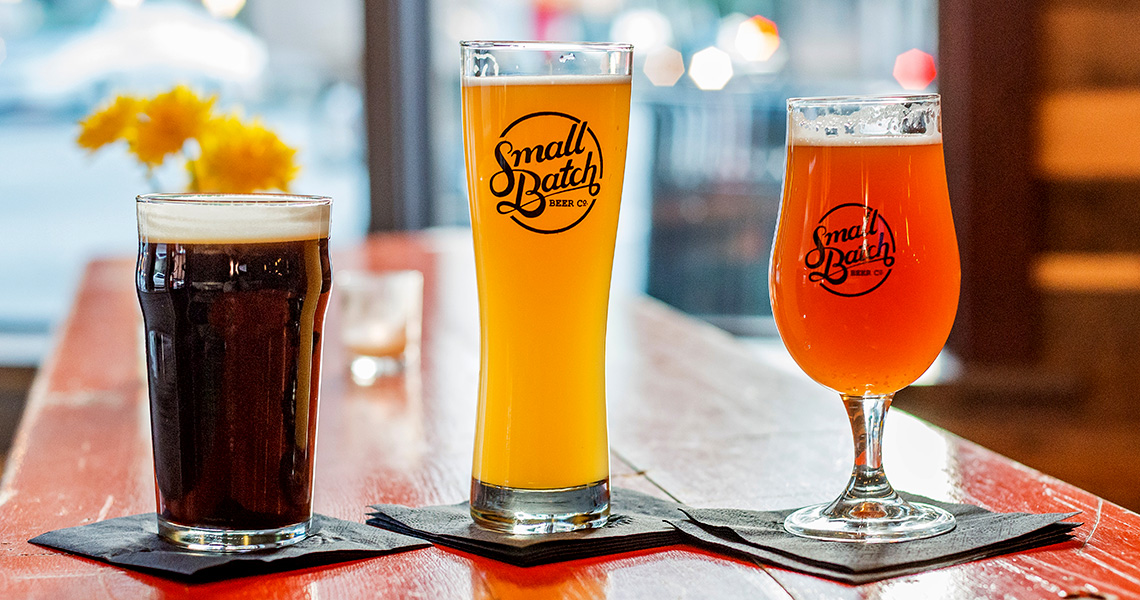 In 2005, Winston-Salem’s Jamie Bartholomaus took a chance. As craft breweries were beginning to bubble up around the state, the budding brewmaster with a dream to start his own brand did a little research and determined his city was ready to up its beer game.

“I remember reading about the economy of the Triad and thought Winston-Salem, in particular, would be a good town for a brewpub,” he says. “We were brimming with new residents and college students who I knew would be a big part of our customer pool.”

Bartholomaus’ Foothills Brewing may have been the first to introduce the city to full-flavored stouts, golden ales, and pale ales, but it wasn’t the last. And today, judging by downtown Winston-Salem’s nine bustling craft breweries and taprooms — all within an easy mile-and-a-half stroll — his dream became a reality.

In a city known for its walkability, it’s easy to try them all. Ready to plan your own craft draft pub crawl? Read on for our tips on where to go and what to sample once you get there.

Lift Your Spirits in Winston-Salem

Raise a glass and savor the moment at our 100-plus downtown eateries and craft breweries. Create your own Winston-Salem Craft Drawl Crawl adventure for the perfect hops-inspired getaway in our hip and historic city. 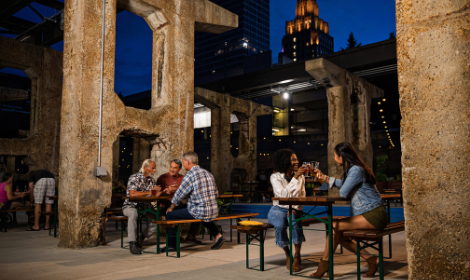 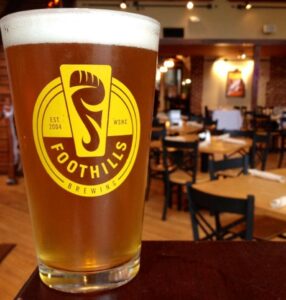 While there is no official start or stop on a tour of Winston-Salem’s Craft Draft Crawl (although there is a helpful map!), the city’s first craft brewery, Foothills, is a logical starting point to get crawling. Hoppyum, an India Pale Ale that makes up half of the brewery’s sales, is the go-to brew here, and it’s joined with an impressive lineup that includes Sexual Chocolate, a limited-release imperial stout, and Thousand Smiles, a lighter golden ale.

For us, consistency is of utmost importance, since we distribute Hoppyum and other beers across the Southeast,” says brewmaster Bartholomaus. “It’s the quality. You know what you’re going to get.” 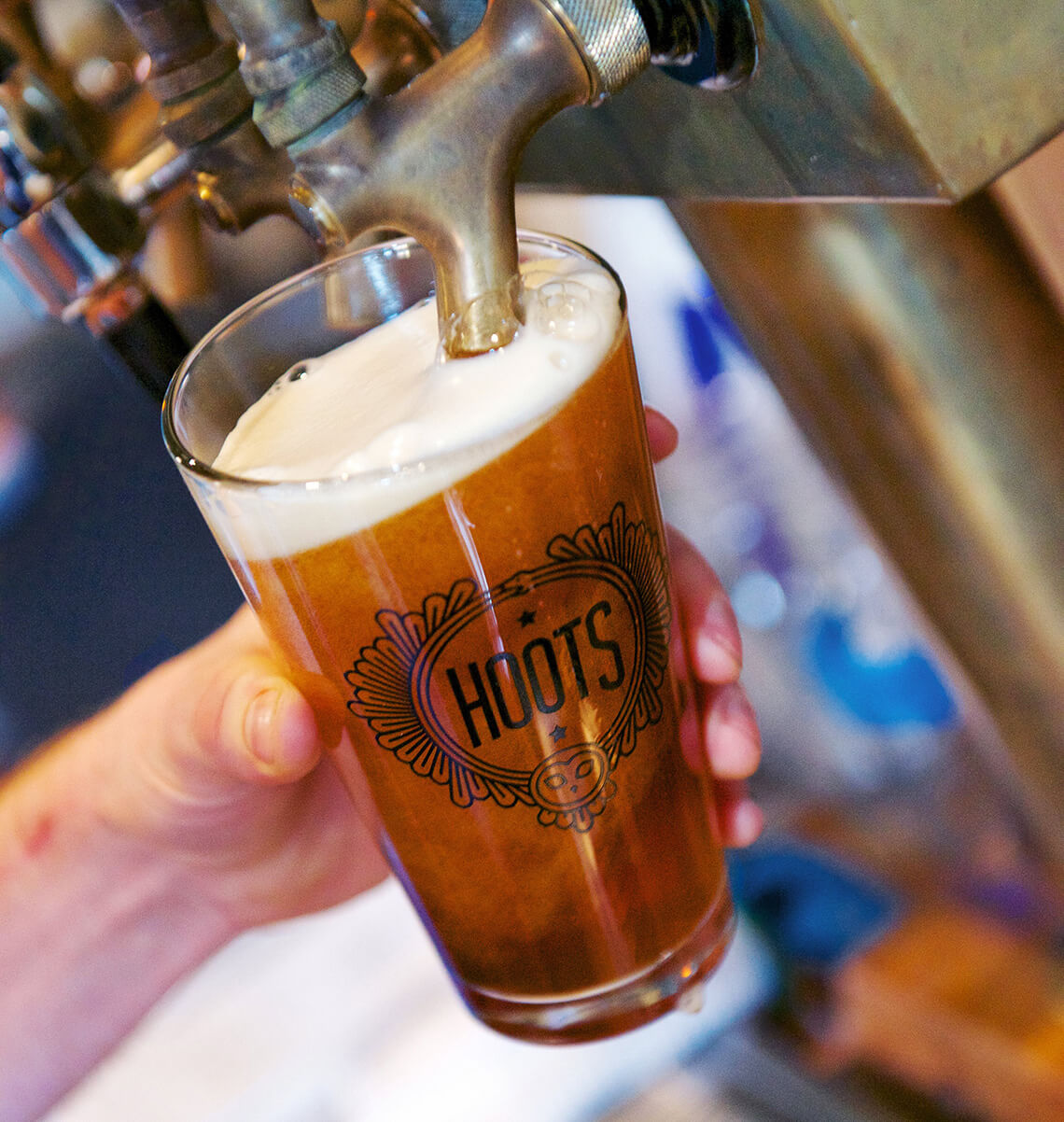 At Hoots Satellite, you can try a craft brew on draft or a specialty cocktail. photograph by J. Sinclair Photography

From Foothills, walk a few blocks to the Downtown Arts District, where the craft brew scene really gets hopping. Stop here for a drink at Hoots Satellite on Trade Street. One of two Hoots bars (the original is at West End Mill Works), Hoots Satellite is a charming gathering spot for the city’s thriving creative community, and, quite possibly, the funkiest place to sip a brew — or a cocktail concocted with house-made sodas. 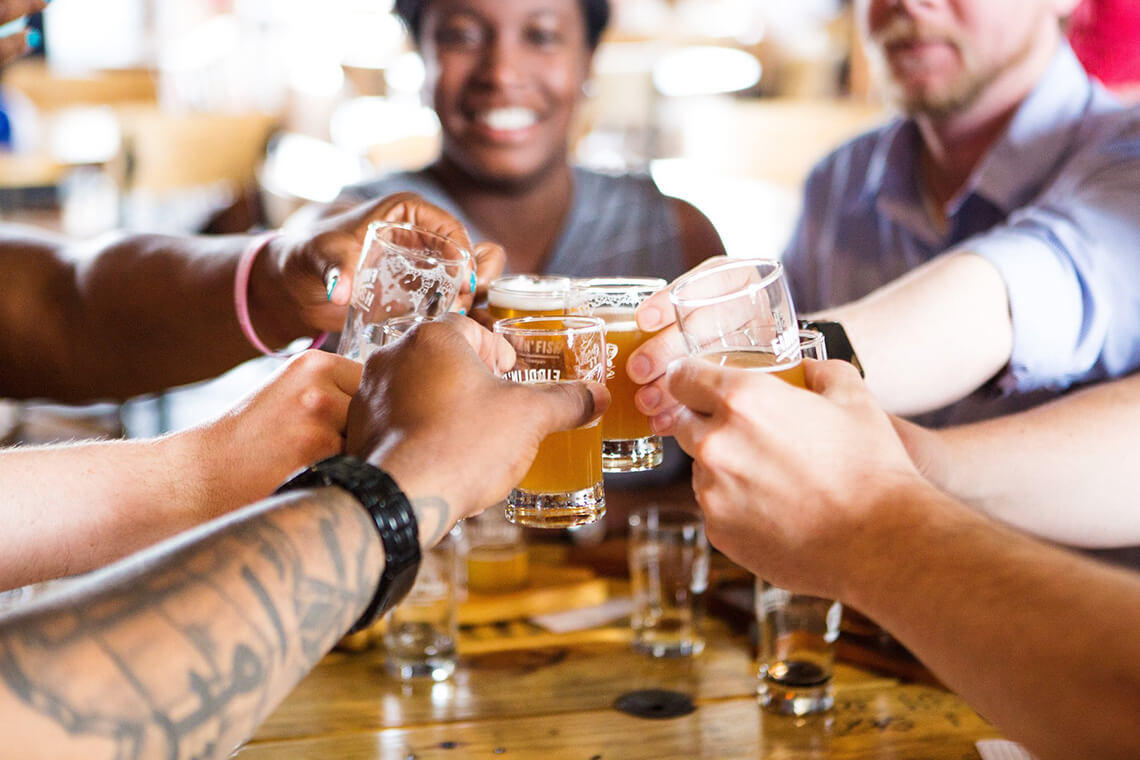 Continuing on Trade Street, Fiddlin’ Fish, a.k.a. “The Fish,” is housed in an early 1900s tobacco warehouse that straddles two thriving downtown scenes, the Downtown Arts District and Industry Hill. Fiddlin’ Fish embraces its role as a community hub, welcoming families to gather, play board games, or watch the big game on one of its many TVs spread around the taproom.

On warm evenings, the spacious patio, which seats nearly 50, is a popular place to sip a beer and munch on a taco from Tuning Fork Provisions, a food truck that is parked onsite most days. The Ardmore amber ale, named after a Winston-Salem neighborhood, is a fixture on Fiddlin’ Fish’s beer roster. 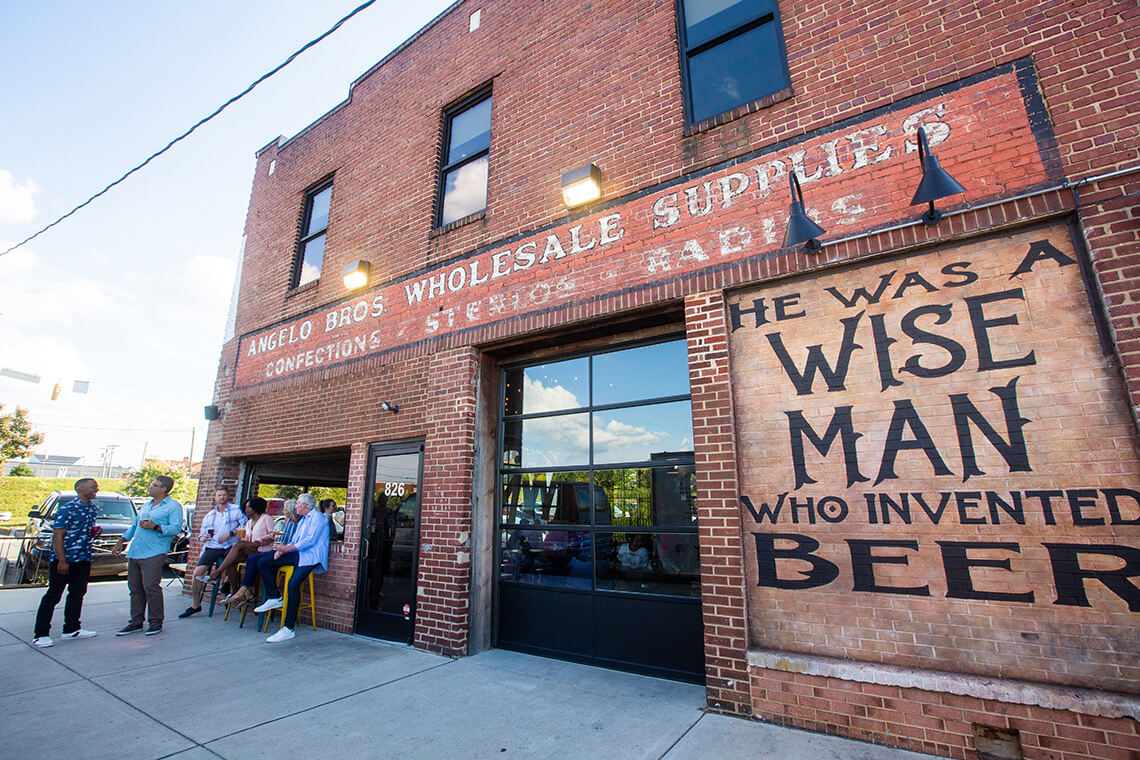 Now it’s time to cross into nearby Industry Hill for a drink at Wise Man. The opening of Wise Man in 2017 jump-started the revitalization of this one-time industrial area on the northern fringe of downtown. Today, that area includes a music venue, restaurant, community maker space, and another craft brewery (Radar). 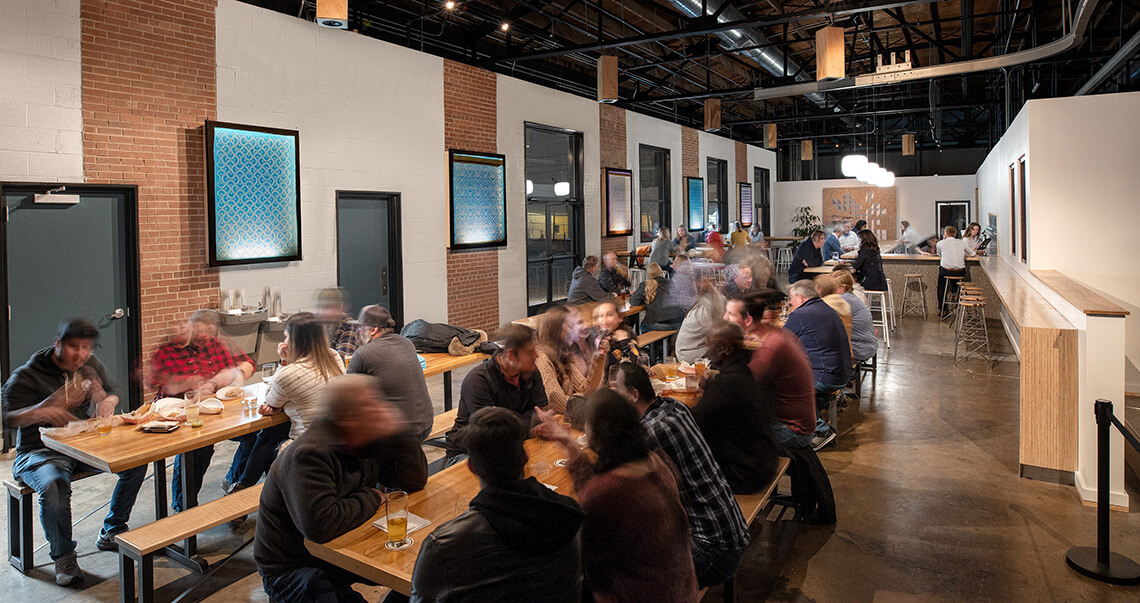 From Wise Man, walk a few minutes east to Radar Brewing Company, the newest brewery in the burgeoning Industry Hill neighborhood. Radar boasts a more modern, less industrial feel than some of the city’s other taprooms. “We felt like we could offer a big-city feeling with a light, bright, and comfortable space,” says Eric Peck, one of the owners. The decor includes long tables made from the wooden lanes of a bowling alley, contemporary art, and a large window that lets customers view their open fermenter. 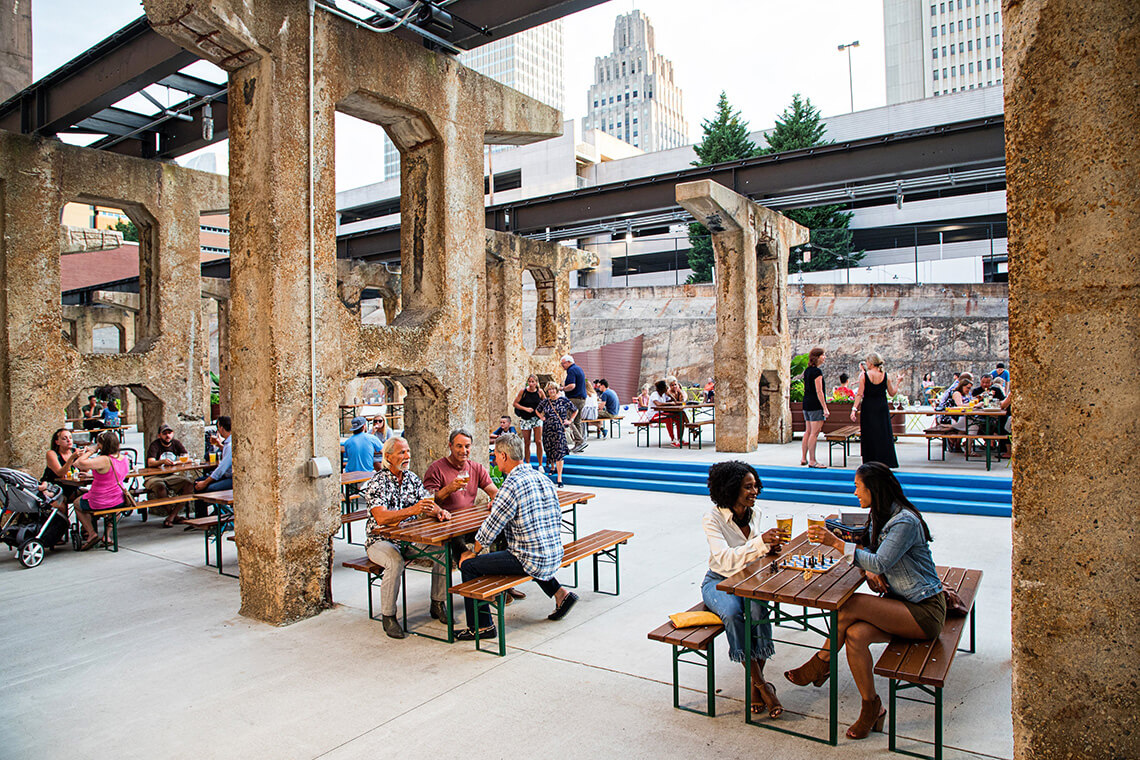 When you leave Industry Hill, walk about four blocks down Patterson Avenue to Incendiary Brewing Company, a pillar of the rapidly developing Innovation Quarter. Incendiary is housed in one of the city’s most unique locations: the old coal-fired Bailey Power Plant that fueled R.J. Reynolds’ tobacco factories. Though the tasting room is plenty comfortable, the big draw is the outdoor patio, known as the Coal Pit. Sipping an Incendiary IPA, nibbling a wood-fired pizza from nearby Cugino Forno, and listening to live music on a warm evening has become a quintessential Winston-Salem experience. 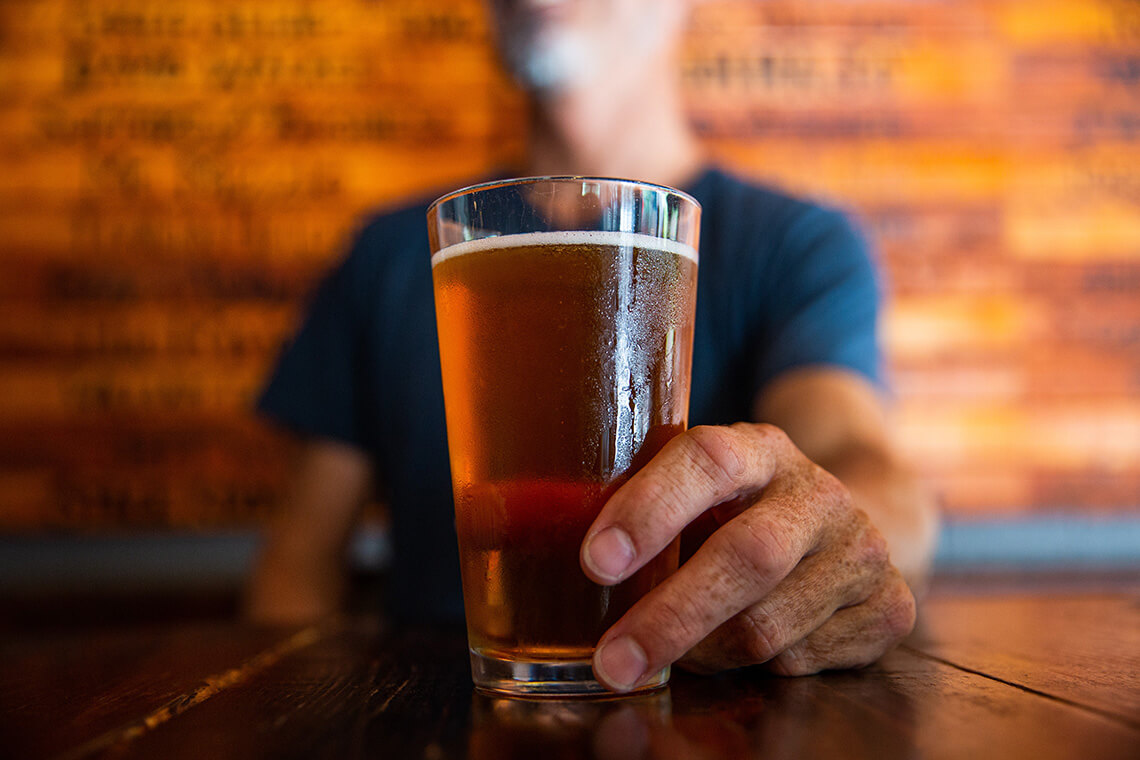 Circling back into the central part of downtown on Fifth Street, Small Batch is located at the corner of the Downtown Marriott, Benton Convention Center, and Embassy Suites, making it a convenient spot for out-of-towners. The dimly lit, cozy nook doubles as a soccer bar. On match day, local fans of England’s Liverpool Football Club get the joint rocking, fueled by such brews as the Queen Cersei blonde ale. Don’t sleep on the food menu, which includes a yummy array of pub grub, from next-level burgers to nachos slathered in barbecue sauce. 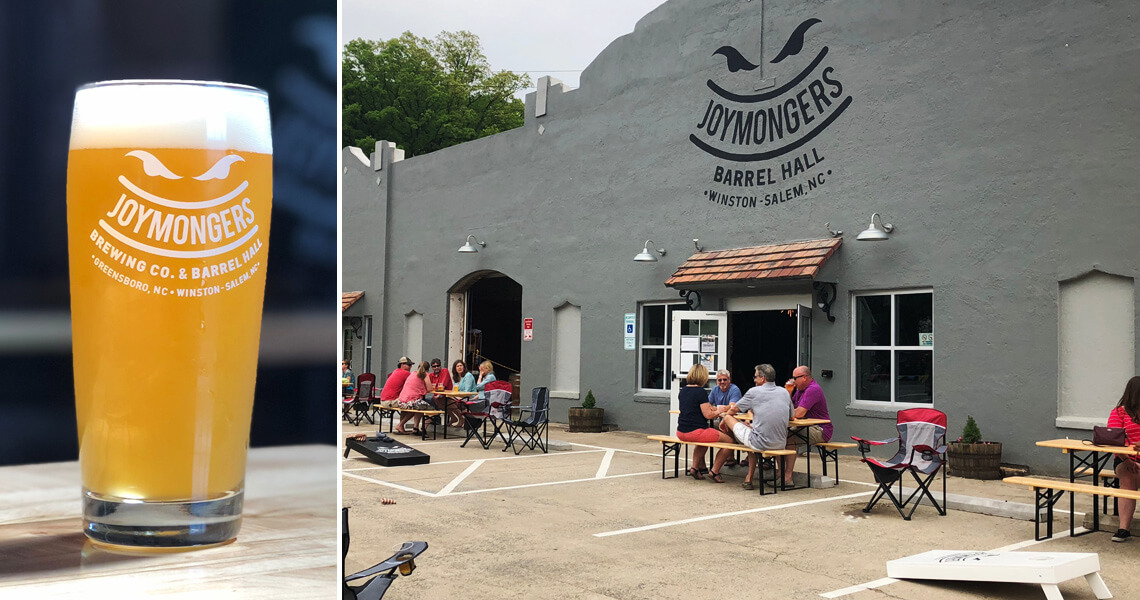 Now it’s time for a leg-stretcher down to Joymongers; however, if you parked near Foothills, you could nab your car here for a quick drive to the city’s Historic West End. Joymongers is a neighborhood taproom with an adventurous selection of barrel-aged beers infused with such flavors as guava-lemon and passion fruit. The 6,000-square-foot taproom includes a 50-foot bar, polished concrete floors, and exposed brick. For all those wonderful touches, the interior’s highlight might be the giant Mighty Mouse floating overhead. The relaxed, chill atmosphere makes it a fitting place to wind down after a day of walking.

Note: If you visit in late spring or early summer, be sure to add one more stop to your list: Lesser-Known Beer Co. is set to open in the West Salem neighborhood. A small lager-focused brewery inspired by age-old German and Czech Republic brewing methods, Lesser-Known malts hail from a small family farm in Moravia. Fittingly, this cozy spot will put you just a few blocks from the Moravian living history village, Old Salem Museums & Gardens.