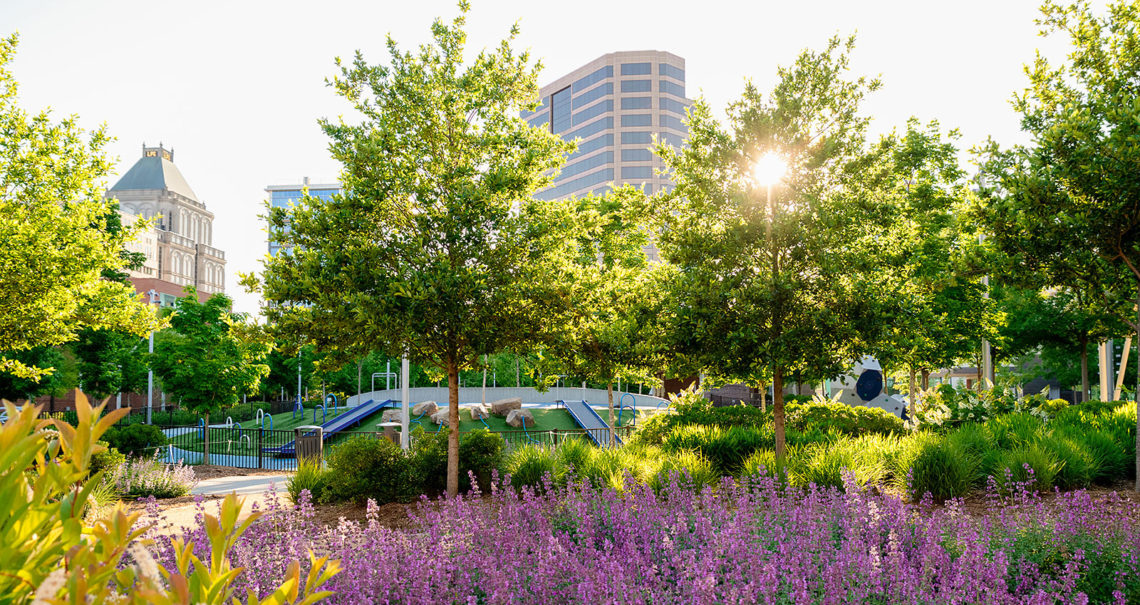 A self-described “plant geek,” Matt Hicks is excited about Greensboro Arboretum’s new ornamental grass and pollinator meadow that features two working beehives. “The Arboretum is a learning garden, so we label everything,” says Hicks, the garden supervisor. “We want you to look at a plant and know what it is.”

Here, tiny plaques perch by every plant: Persian Parrotia. Full Moon Maple. Scent & Sensibility Lilac. “We have about 1,400 distinct varieties of plants, and in certain collections, the diversity really shines,” Hicks says. “We have nearly 300 hostas, and 90 different varieties of dwarf conifers.”

Wet Your Whistle in Greensboro

Take a sip of Greensboro’s finest brews. Home to nine breweries and an award-winning distillery, from Stouts to IPAs, our ales offer something for everyone. You’ll be surprised by all we have to offer. 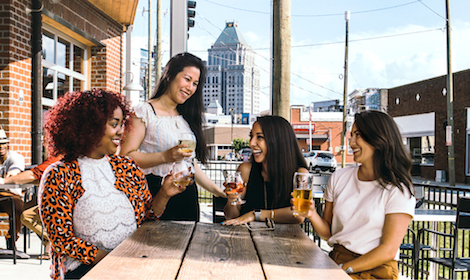 And the lush greenery and diversity of flora showcased at the Greensboro Arboretum can be found throughout the city. Within Greensboro’s 132 square miles, more than 100 parks provide canopied respite. Ready to find your secret garden? From manicured flower beds to woodland trails, discover our guide to Greensboro’s verdant escapes.

Entering Tanger Family Bicentennial Garden at Hobbs Road is like stealing away onto a private estate. Birdsong fills the air and a stream babbles by park benches. Established in 1976, the garden was created to honor the country’s 200th anniversary.

“Bicentennial is a manicured garden; it’s very clean cut,” says Ryan Richardson, the botanical gardens landscape supervisor. “I’m most proud of our annual beds. We have more than 50, and they get changed out twice a year.” Think pansies, kale, and cabbage in the fall, and SunPatiens, begonia, and lantana in the summer — plus countless azaleas, magnolias, and crepe myrtles on 7.5 acres. “The goal is that there are flower beds everywhere,” Richardson says. “And all of them are color-coordinated as far as the eye can see.” 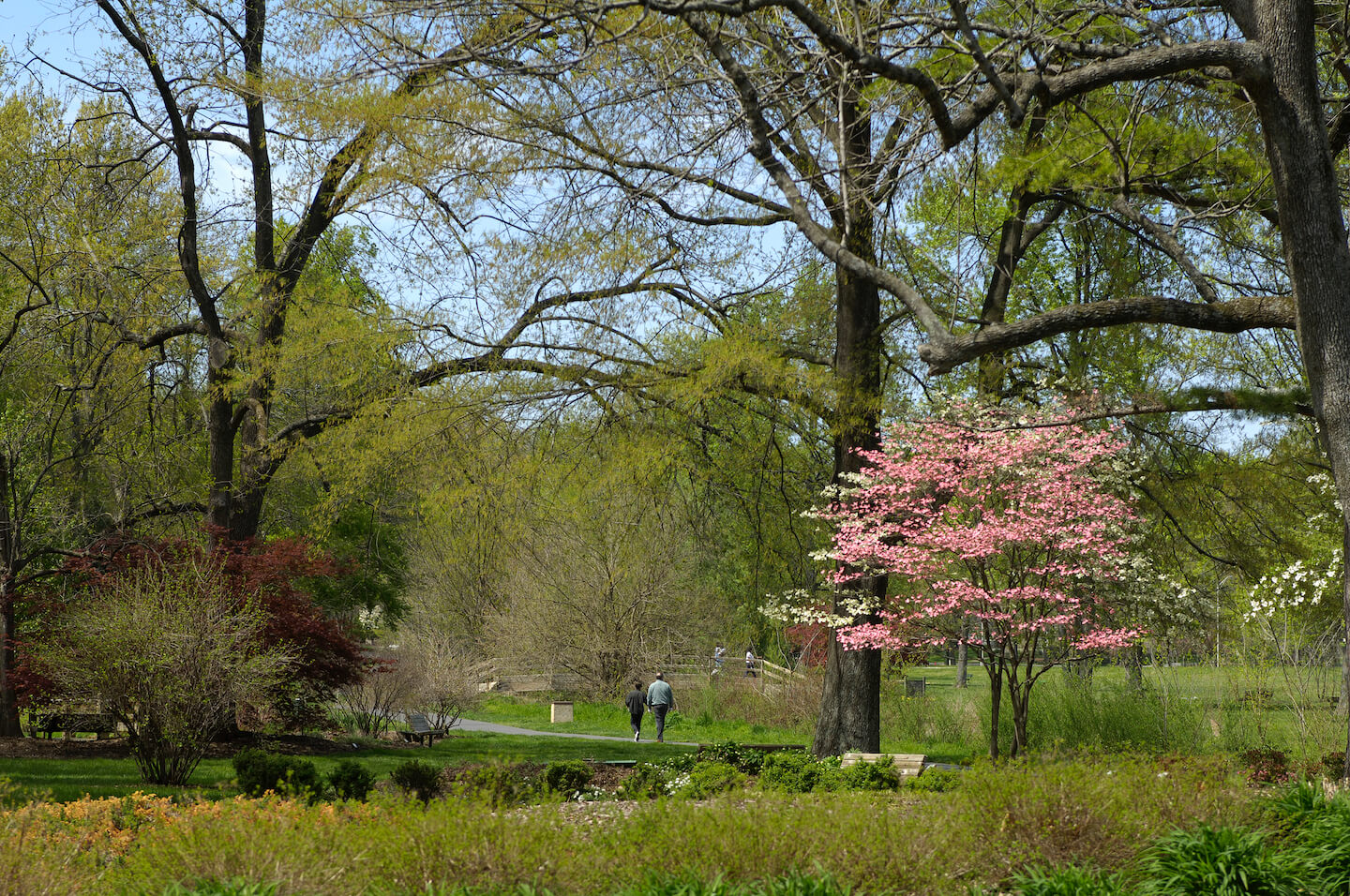 White flowers, trees, and shrubs surround the wedding gazebo — an elegant setting that attracts a steady stream of brides from March to November. But the garden caters to everyone: kids attending birthday parties, master gardeners viewing the annual beds, and historians touring the replica of an old gristmill complete with waterwheel.

Given all these unique features — even a French bocce ball court called “Petanque” — it’s no surprise Bicentennial attracts more than 30,000 visitors each year.

Just across from Tanger Family Bicentennial Garden on Starmount Farms Drive lies the entrance to the Bog Garden at Benjamin Park. “The Bog is very different compared to Bicentennial,” Richardson says. “It’s more of a natural, native woodland marsh.”

Tucked behind the busy Friendly shopping center, the Bog is one of Greensboro’s best-kept secrets — not even longtime residents know it’s there. Those who haven’t been are missing out on an enchanted forest: A half-mile-long, elevated boardwalk and leafy pathways meander through seven acres of forested hillside and wetlands.

One trail leads to Serenity Falls, a 150-foot waterfall honoring Joe Christian, who began the garden in 1987 and spent years installing plants. In the past two years, Richardson has overseen the planting of 2,500 native species, including sweetbay magnolia, aromatic aster, and purple anise.

Birders who flock to the Bog for its bounty of winged visitors have spotted bald eagles, blue and green herons, and ospreys. But, by far, the Bog’s biggest “celebrities” are a pair of barred owls that return yearly to nest. “In February, the owls go into their box and sit on their eggs, and the owlets hatch about a month later,” Richardson says.

For Kids and Kids at Heart

From the colorful Alphabet Arbor to the caterpillar-shaped Plant Tunnel, Gateway Gardens gives children the chance to interact with nature and learn all at once. Metal alphabet letters, from “A is for Apples” to “Z is for Zebra Grass,” sprinkled throughout the Children’s Garden challenge visitors to find all 26 in a scavenger hunt. The garden also includes a special “edible” section, where master gardeners teach children how to grow vegetables.

“Overall, we’re more of a teaching garden for kids and families,” says Derek Harmon, landscape supervisor. “Even though we’ve been open since 2011 and we’re at the corner of major thoroughfares, Florida Street and Gate City Boulevard, a lot of people don’t know we’re here.” 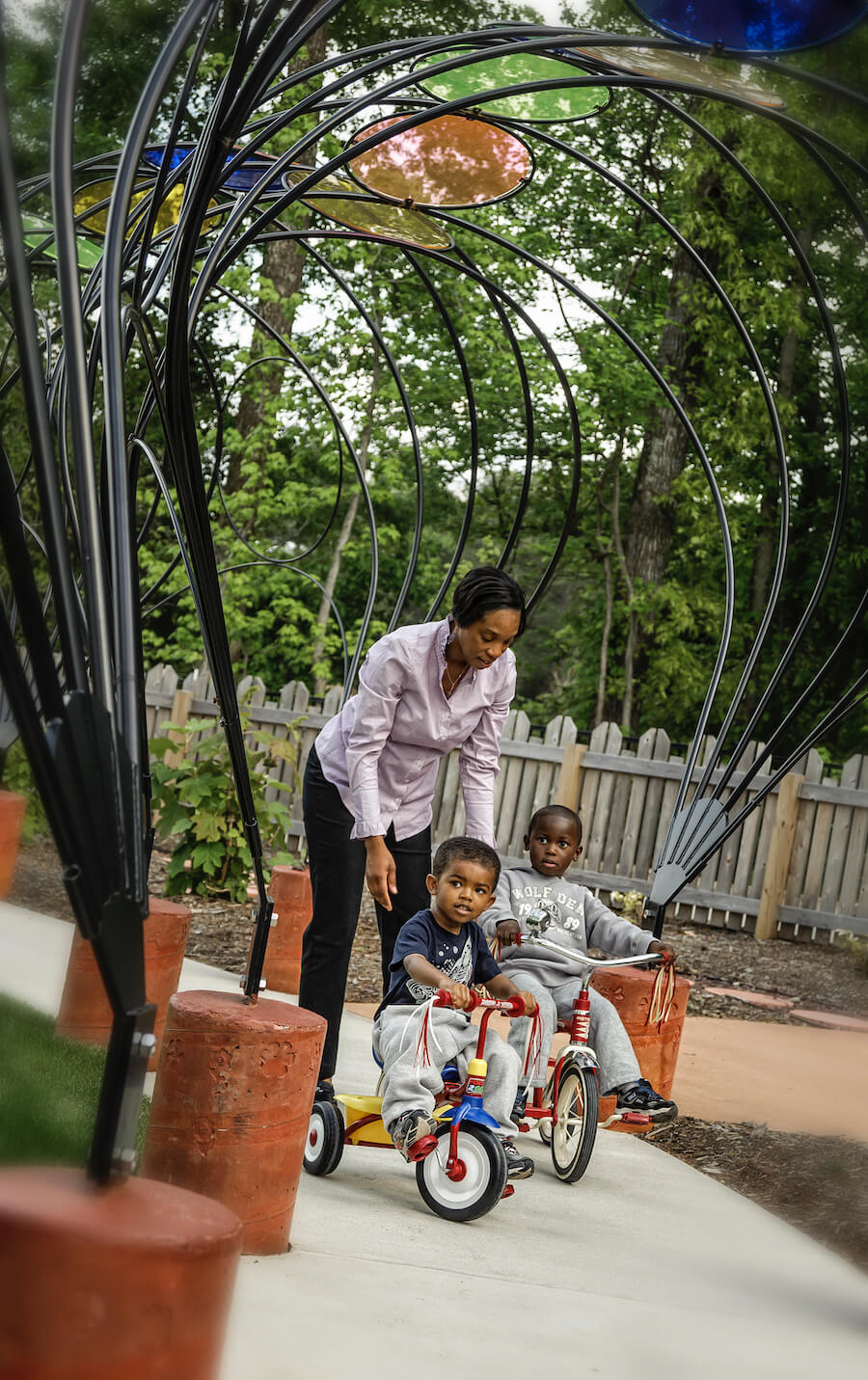 Now at seven acres and growing, Gateway is full of fun features: the Jeffrey the Giraffe topiary, the Book Stage amphitheater, and large metal apple sculptures that children can crawl into — although, Harmon says, “Sometimes we find adults inside them reading books.”

There’s also the Price/Bryan Performance Place and the South Lawn and Great Lawn for special events, most of which are free to the public. “Free community programming is paramount to our mission,” says Rob Overman, the executive director of Greensboro Downtown Parks. “We provide 425 free programs annually to the community.” Those might include festivals, movie nights, concerts or fitness classes.

The park’s giant and aethereal aerial net sculpture, “Where We Met,” symbolizes how LeBauer unites the northeastern section of the downtown arts community. The park is situated amid the Greensboro Cultural Arts Center, Central Public Library, and Greensboro Historical Center. “Greensboro should feel proud of LeBauer,” Overman says. “Now in its fourth year, the park was designed after Bryant Park in New York City. For a city of our size and population, the fact we’ve constructed, built, and maintained a park of this caliber is extraordinary.”