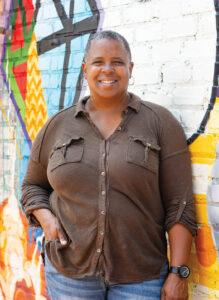 Dianna Ward would bet that there’s someone from almost every continent living in her neighborhood near Charlotte’s Central Avenue — and restaurants to match. “You’ve got Serbian, you’ve got Bosnian, you’ve got several Vietnamese restaurants, you have all of the South American countries,” says Ward, executive director of Charlotte Joy Rides and founder of Charlotte NC Tours and Intown Charlotte E-Delivery Service. “If you want to live in a place that looks like America, Central Avenue is the place for you.”

When Ward moved to the west side of Charlotte in 2001, she visited this area often — it was her sanctuary, she says — and she eventually settled in nearby Sheffield Park. “It was the only place you could find restaurants where there was a diverse body of owners and customers. I felt at home at those places, and my palate and my dollars have kind of stayed in the same area.”

Central Avenue has been known for its diversity since it served as a haven for Italian, Greek, and Jewish immigrants in the early 1900s. “There’s been a lot of change along Central Avenue,” Ward says, “but it’s still where, regardless of who you are, you’re going to find a place where you are accepted and loved — and that fits your taste buds.”

Mama’s Caribbean Grill. Ward has been a pescatarian for three years, but “sometimes I miss the meat patties that they sell,” she says of this restaurant owned by Jamaica native Vinroy Reid. “It’s places like that where I’m like, ‘Oh my gosh, some jerk pork or jerk chicken would be good right now.’” 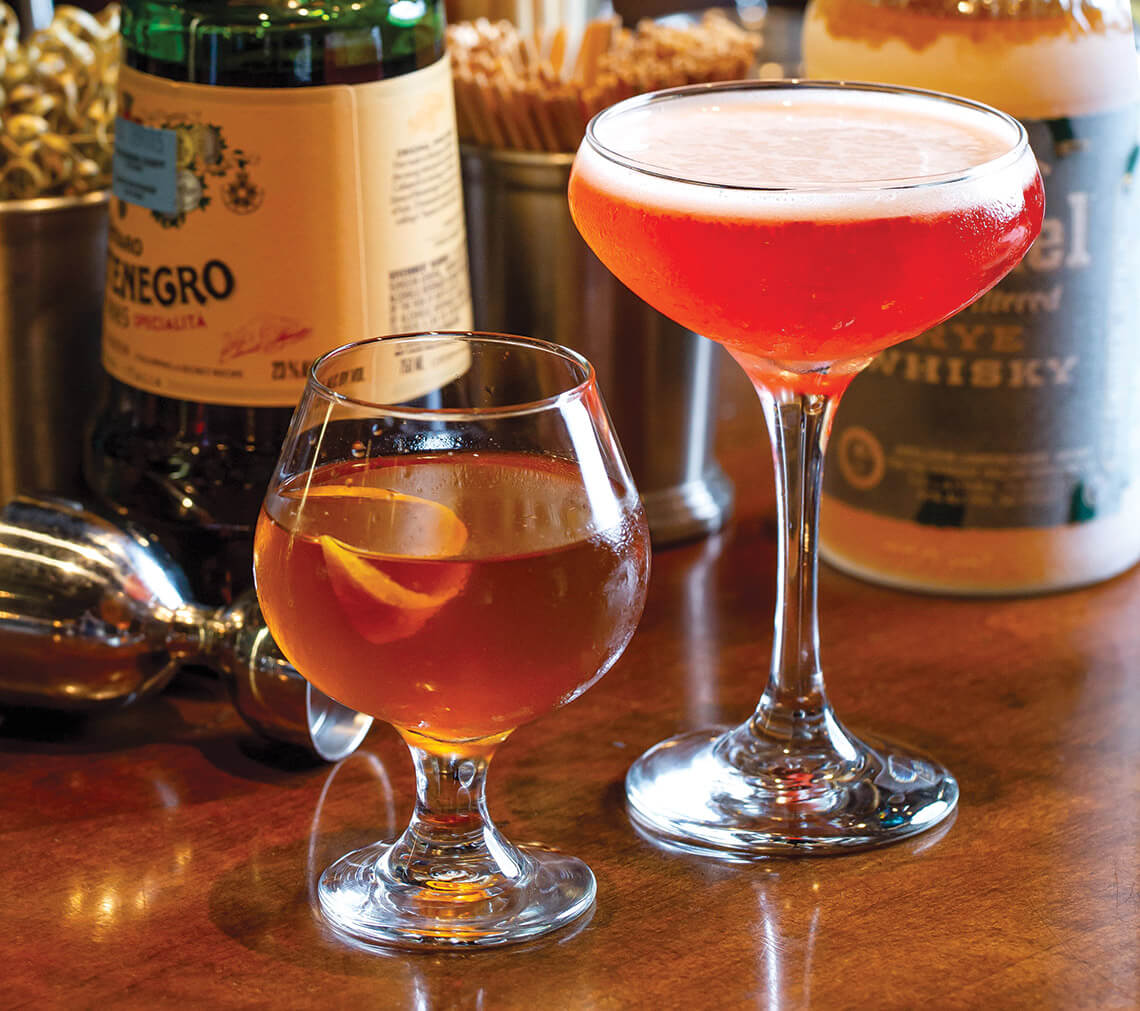 Order a cocktail (or two) at Soul Gastrolounge. photograph by Tim Robison

Soul Gastrolounge. With its handcrafted cocktails, sushi, and small plates like Asian glazed pork belly tacos, “Soul has what could be considered a froufrou menu with a real come-as-you-are, slightly hip ambience,” Ward says. “They’ve been able to create an environment surrounding Asian food that draws in people from all backgrounds.”

Sav/Way Foods. This Latin supermarket offers “some of the freshest produce in the city, any day of the week,” Ward says. “Then, when you go in the back, in the corner, there is a food counter that’s to die for,” serving Latin American specialties like tortas, or sandwiches, tacos, and quesadillas. 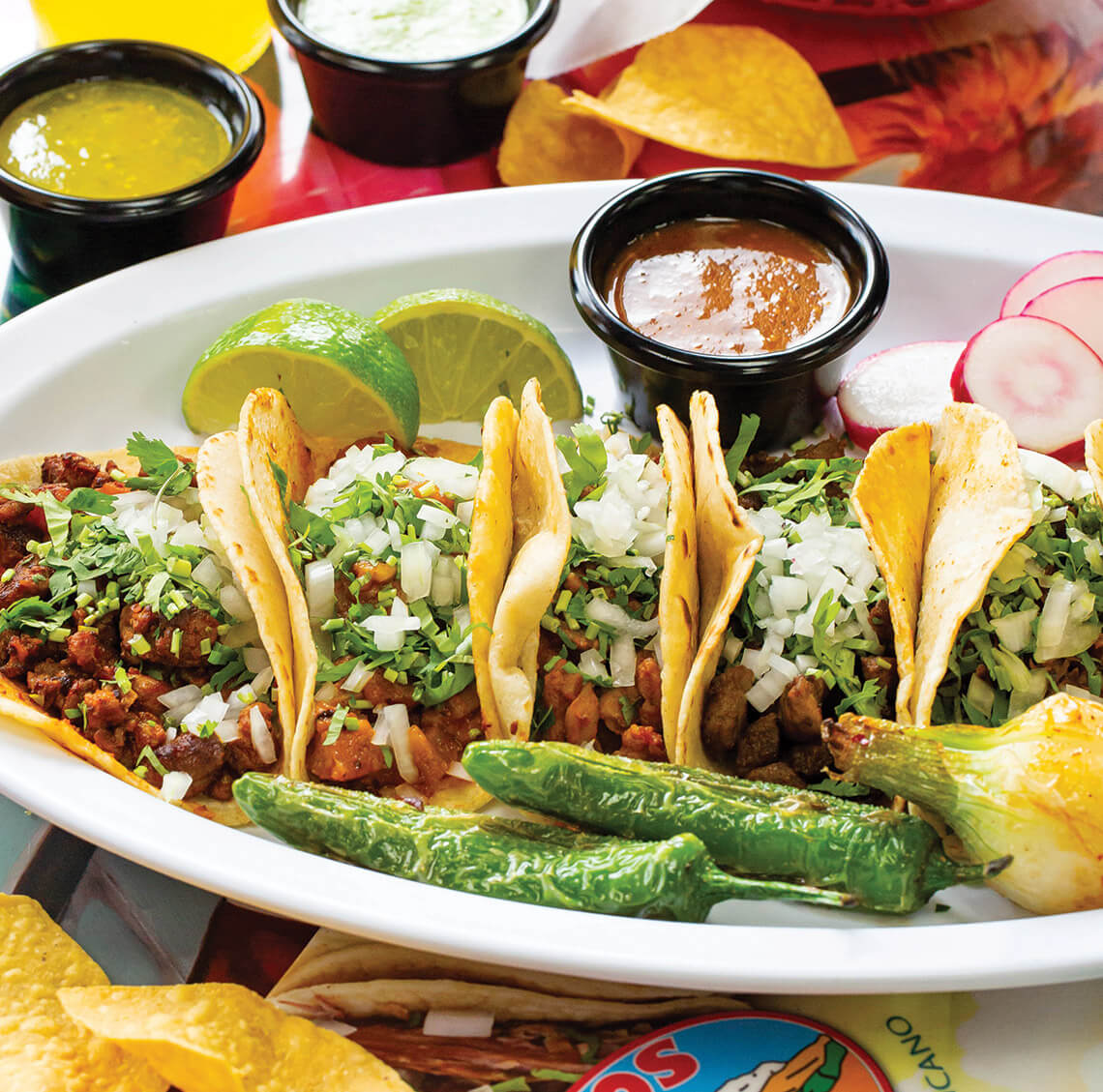 Tacos El Nevado. When Ward’s house was being built, she asked a Mexican carpenter on the job, “Where do you go when you want to eat authentic Mexican food?” His answer? Tacos El Nevado, a hole-in-the-wall taco joint with a vibrant interior. Try their tacos al pastor or filled with chorizo, chicharrón, carnitas, or borrego (lamb). “They even make me veggie tacos,” Ward says.

Intermezzo Pizzeria. This restaurant, owned by two Serbian brothers, serves up traditional dishes from their home country, like sarma — cabbage rolls with ground beef, rice, bacon, and onion — and piroska, a Balkan-style stuffed pizza. “You might actually start a conversation with your neighbor,” Ward says. “That’s the kind of place Intermezzo is.”

Two Scoops Creamery. Marques Johnson opened this ice cream shop with his two best friends, Blake Hatchett and Rich Moyer, after learning how to make ice cream from his family in Florida. All of Two Scoops’ ice cream is homemade, from seasonal flavors like Not Your Mama’s Pumpkin Pie and Pralines N Cream to classics like mint chocolate chip and vanilla, Ward’s favorite (“I’m a purist,” she admits). 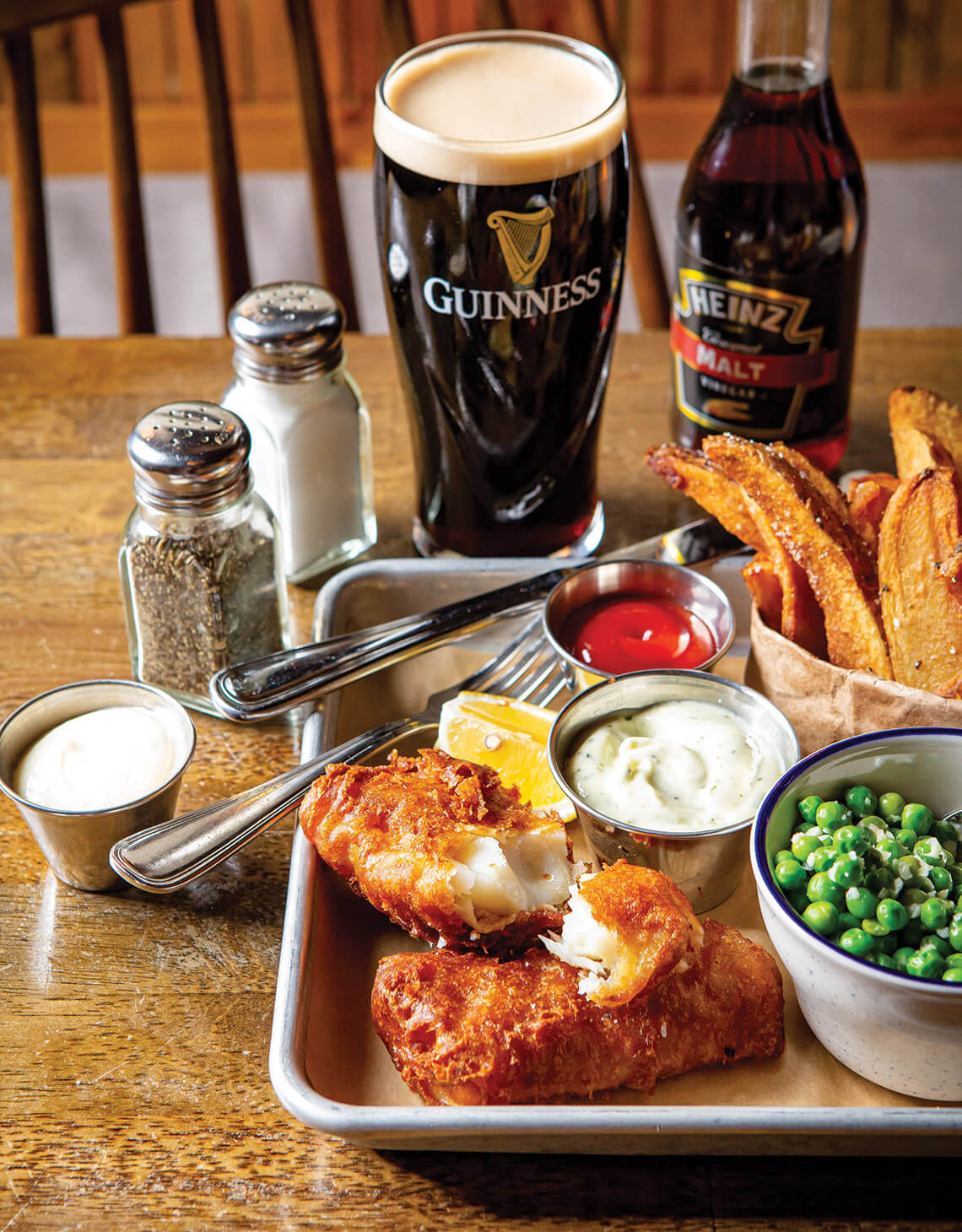 Head to The Workman’s Friend for fish and chips. photograph by Tim Robison

The Workman’s Friend. This traditional Irish pub is the real deal — the space was designed by Dublin native Corrina Devin, whose husband, Kevin, one of three co-owners, is also from Ireland. “In the evenings, people are piled outside of that building,” Ward says. “It’s just a great place to go have a drink and have dinner or some light fare with friends.”

Landmark Restaurant Diner. Since this Greek diner opened in 1990, it’s become known for much more than its chicken souvlaki wraps and spanakopita. With traditional breakfast dishes and a wide variety of Southern classics, “it’s a slice of Americana,” Ward says. “It’s where you take big groups because they have big tables.” 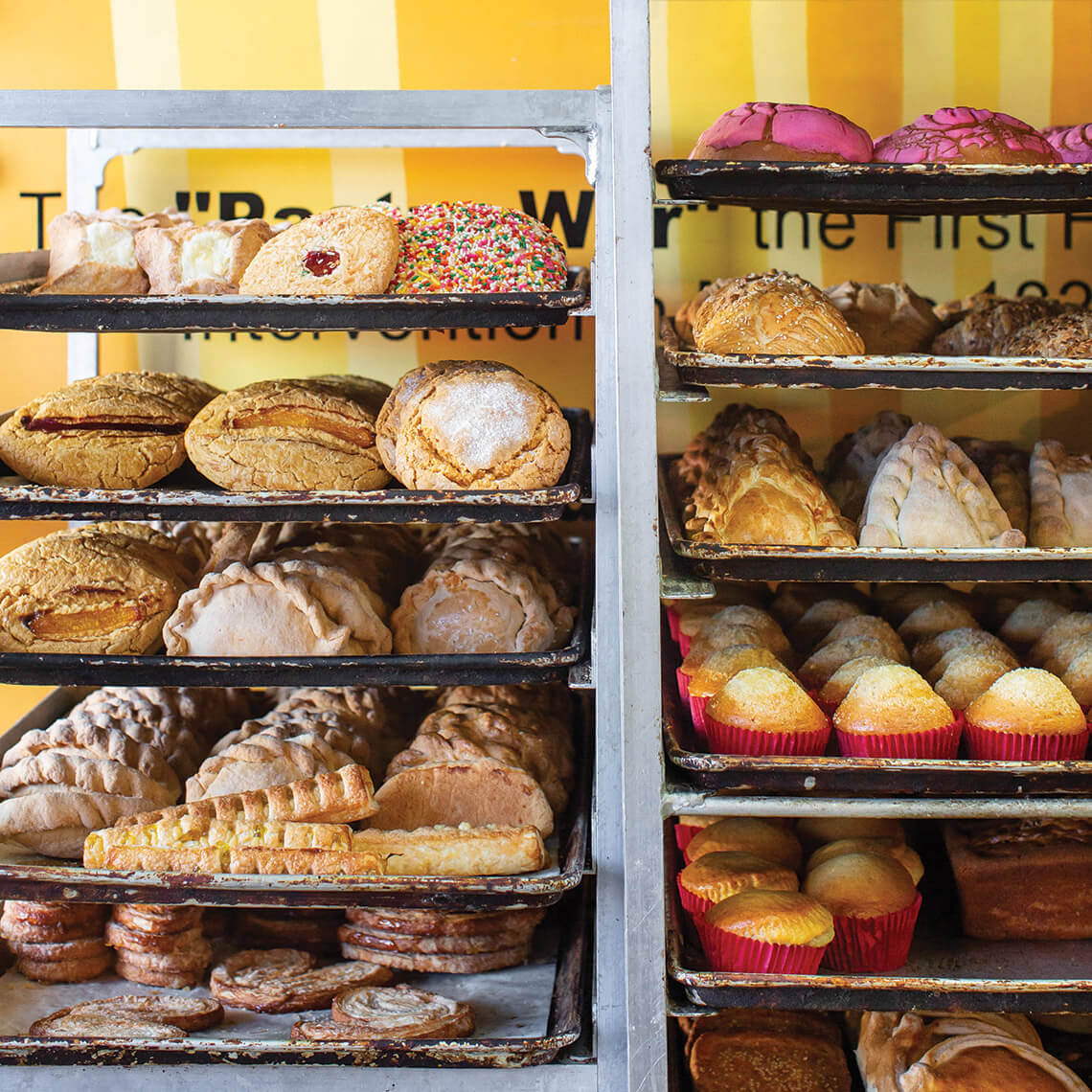 Pop into Manolo’s Bakery to enjoy a Latin dessert. photograph by Tim Robison

Manolo’s Bakery. “Manolo Betancur is a treasure in this city,” Ward says. “His bakery is amazing, but he’s also been at the center of helping the immigrant community in Charlotte.” Latin specialties like tres leches cake, churros, Mexican conchas, and Salvadoran empanadas are available alongside doughnuts, cake pops, fruit tarts, cakes, and 65 types of artisan breads.

Good Wurst Company. “If you want to taste an authentic German-style hot dog, you gotta go [to this restaurant],” Ward says. “I’m a pescatarian, but my partner is a ‘meatatarian’ and absolutely loves it. Their vegan dog is one of the best vegan substitutes that I’ve put in my mouth.” 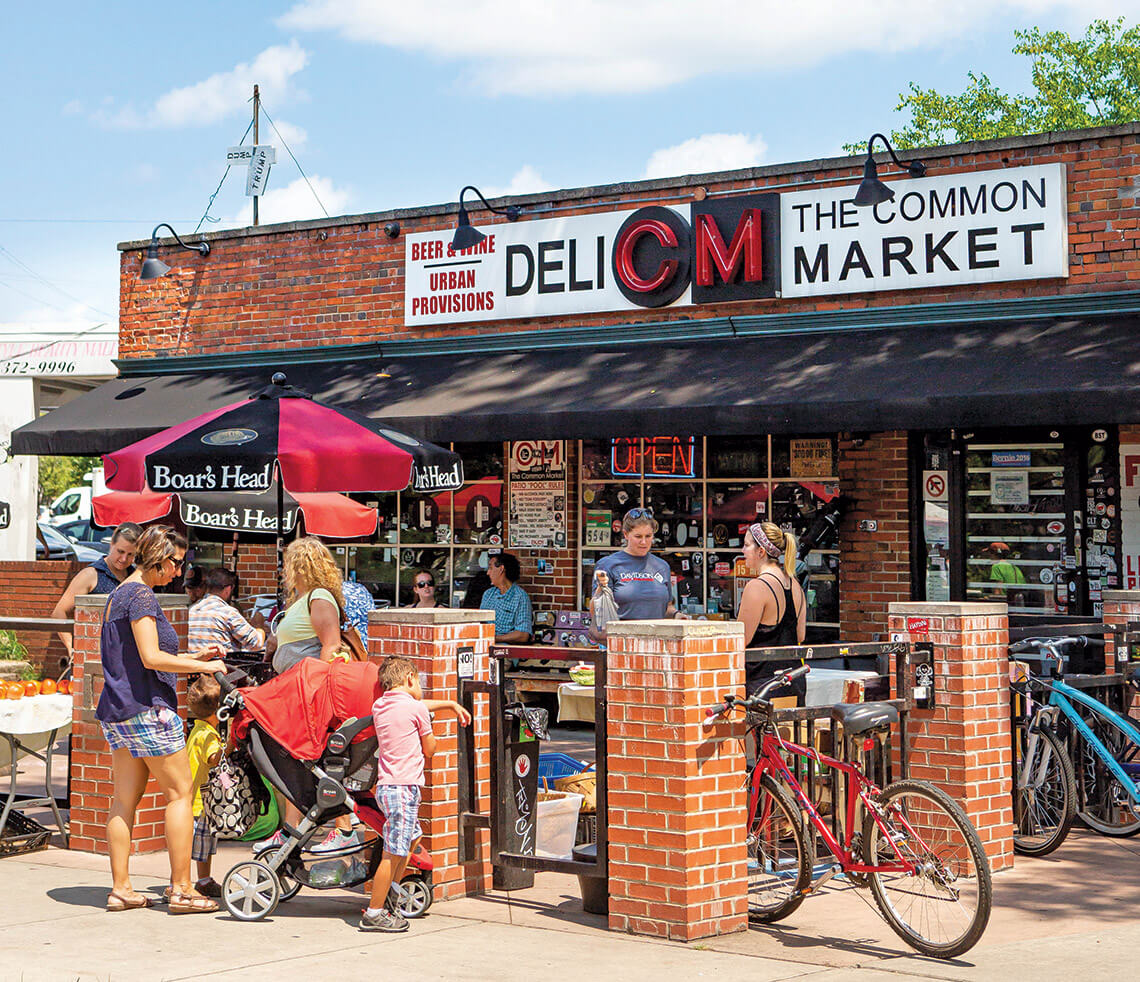 The Common Market. Half of Common Market, on Commonwealth Avenue, sells wine, beer, and novelty gifts, like Jesus action figures and vintage lunch boxes. Throughout the space is communal seating for the market’s restaurant, which serves soups, salads, and sandwiches. “You could be sitting next to a banker, or you could be sitting next to somebody who’s homeless,” Ward says. “Everyone is welcome. If you’re sitting by yourself, you will not leave without knowing someone.”

EastSide Local Eatery. Three local musicians transformed an old storage area into this vegetarian restaurant. “They put in lots of cutesy seating and artwork on the walls,” Ward says. “When I think of going someplace as a refuge, for both the food and the ambience, I’m thinking EastSide Local.” 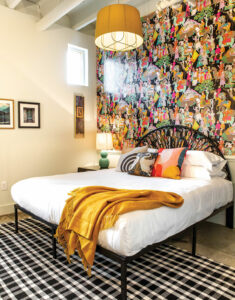 Rest your head at Refuge. photograph by Tim Robison

Refuge. Brothers Anup and Jay Patel and Jay’s wife, Nimisha, are the hospitality group behind the Graduate (formerly The Franklin) in Chapel Hill. In September, they opened Plaza Midwood’s first hotel on Central Avenue. Refuge, a five-room “prototype,” is just a taste of what the Patels and their team hope to accomplish with the full-scale hotel they plan to build in 2022. Until then, they’ll be learning from their guests and neighbors about how they can best connect with the community. With various room layouts for all types of travelers and an indoor/outdoor gathering space, Refuge offers the same inclusive atmosphere that makes Central Avenue, well, a refuge.

For 40 years, International House has been supporting cultural diversity in Charlotte. In addition to legal and educational resources for immigrants, the nonprofit offers opportunities for cultural collaboration and understanding through a book club, a speaker series on global issues, conversation hours in multiple languages, a young professionals group, and an international women’s club that comprises more than 100 members from 40 countries.