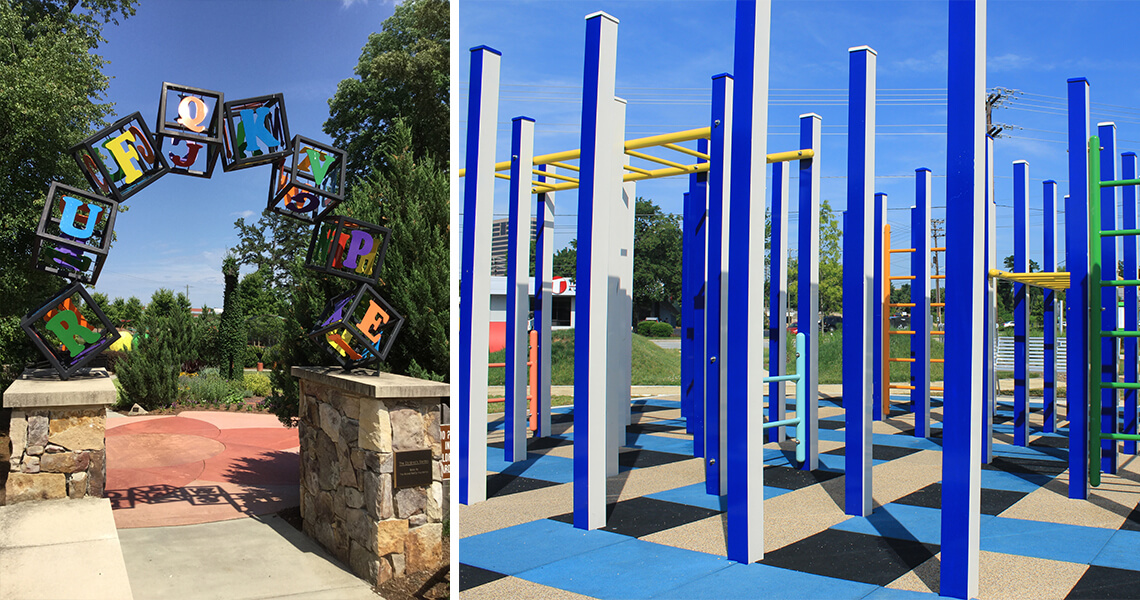 Greensboro’s park tradition dates back to 1902, when locals hopped aboard the trolley and rode west to Lindley Park’s Vaudeville theater, electric fountain, and dancing pavilion. On the north side of town, up to 2,000 visitors a day streamed into Country Park to ride a vertical, aquatic merry-go-round constructed smack dab in the middle of a lake. And across the city, a new type of park emerged in the ’20s, as developers and conservationists converted low-lying floodplains to lush green spaces.

“Greensboro was a pragmatic Scotch-Irish town,” says Benjamin Briggs, architectural historian with Preservation Greensboro. “They learned that by doing what seems to be the opposite of making money — donating land for park space — actually increases the value of your land.”

Today, those trees planted along the neighborhoods’ streams have grown into towering oaks and maples — a vision-turned-reality for a group of community planners who believed conservation and development could go hand-in-hand.

Ready to get out and play?

East Greensboro is brimming with possibilities — offering a variety of development opportunities. The proximity to Interstates 40 and 85 make it ideal to live, work, and play. Discover what makes East Greensboro the place to be. 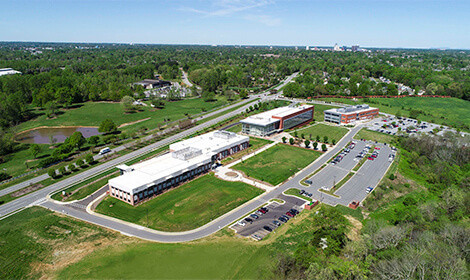 Ask any recent Keeley Park visitor to report their favorite thing about this east Greensboro destination, and you’ll likely get a different answer.

The 18-hole disc golf course is one of the best in town. Designed by INNOVA Disc Golf, the course includes a mixture of long tees that play over 8,000 feet and short tees over 6,500 feet.

Bikers with a need for speed love the pump track — the red clay dirt surface appeals to both beginners and advanced riders, who can cycle around two tracks of continuous dirt loops of rollers and berms.

And unveiled just last year, the Up in the AIR All-Inclusive playground gives everyone a chance to participate. AIR stands for adaptive and inclusive recreation, and at Keeley, that includes a 50-foot-long zipline with inclusive seating and a merry-go-all — an inclusive whirl at ground level. 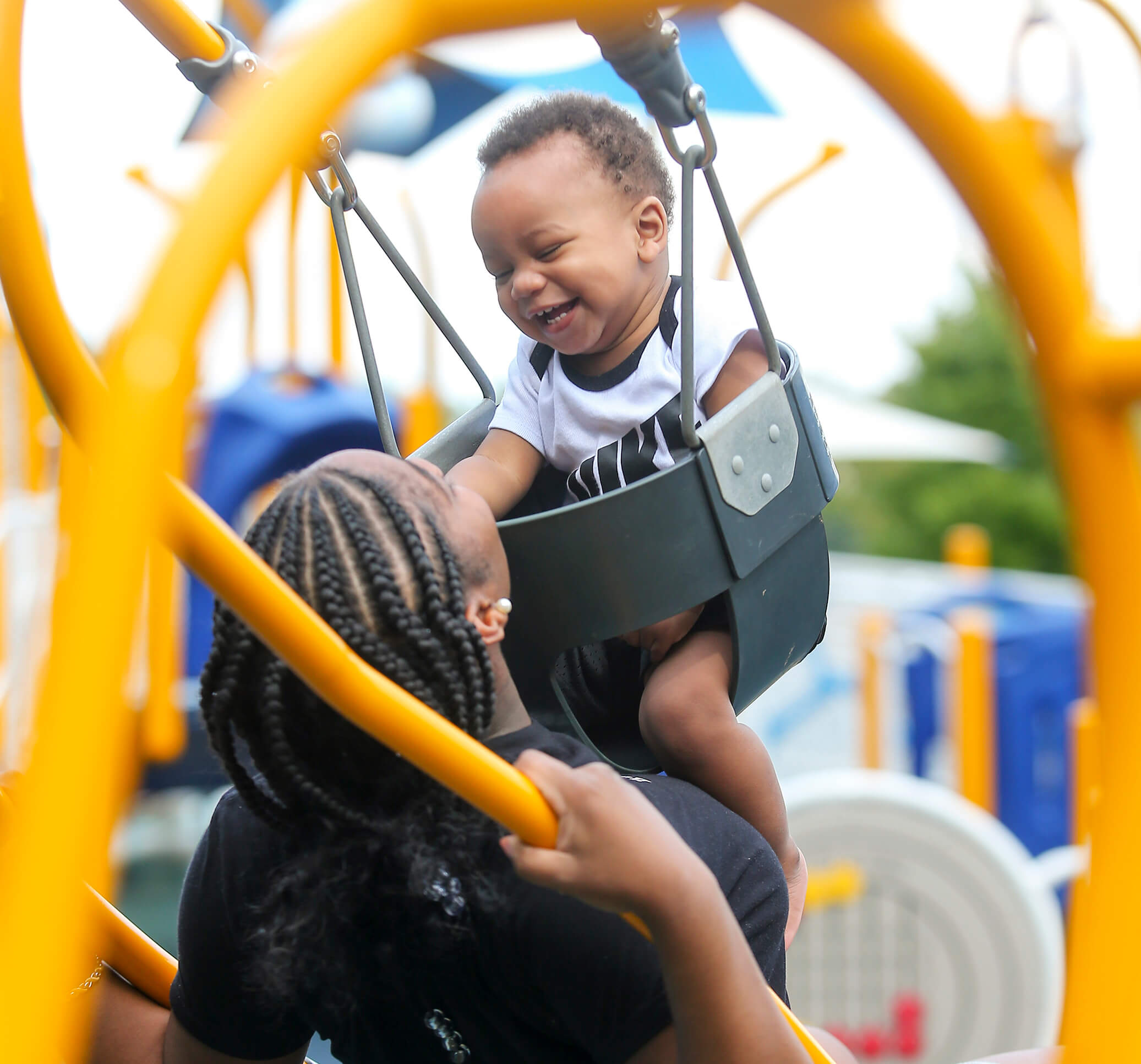 Keeley Park’s Up in the AIR All-Inclusive playground gives everyone a chance to participate. photograph by City of Greensboro

Also in east Greensboro, Barber Park refreshes families with children year-round — but especially on super-hot days. Start (and end) your visit at the sprayground, which provides hours of entertainment for tiny feet as they jump and dodge through fountains and waterspouts.

A cool respite waits for adults, too. From the parking lot in front of the sprayground, look right and follow the clearing in the woods to a paved trail that winds through Barber Park’s 109 acres. Whether you’re strolling or jogging, a one-mile jaunt passes quickly when it’s tree-lined and sun-dappled.

If you’re more of an indoor sports enthusiast, check out Barber Park’s Simkins Indoor Sports Pavilion, an impressive space open to the public. Here, you can access four courts for sports like tennis, basketball, and volleyball. 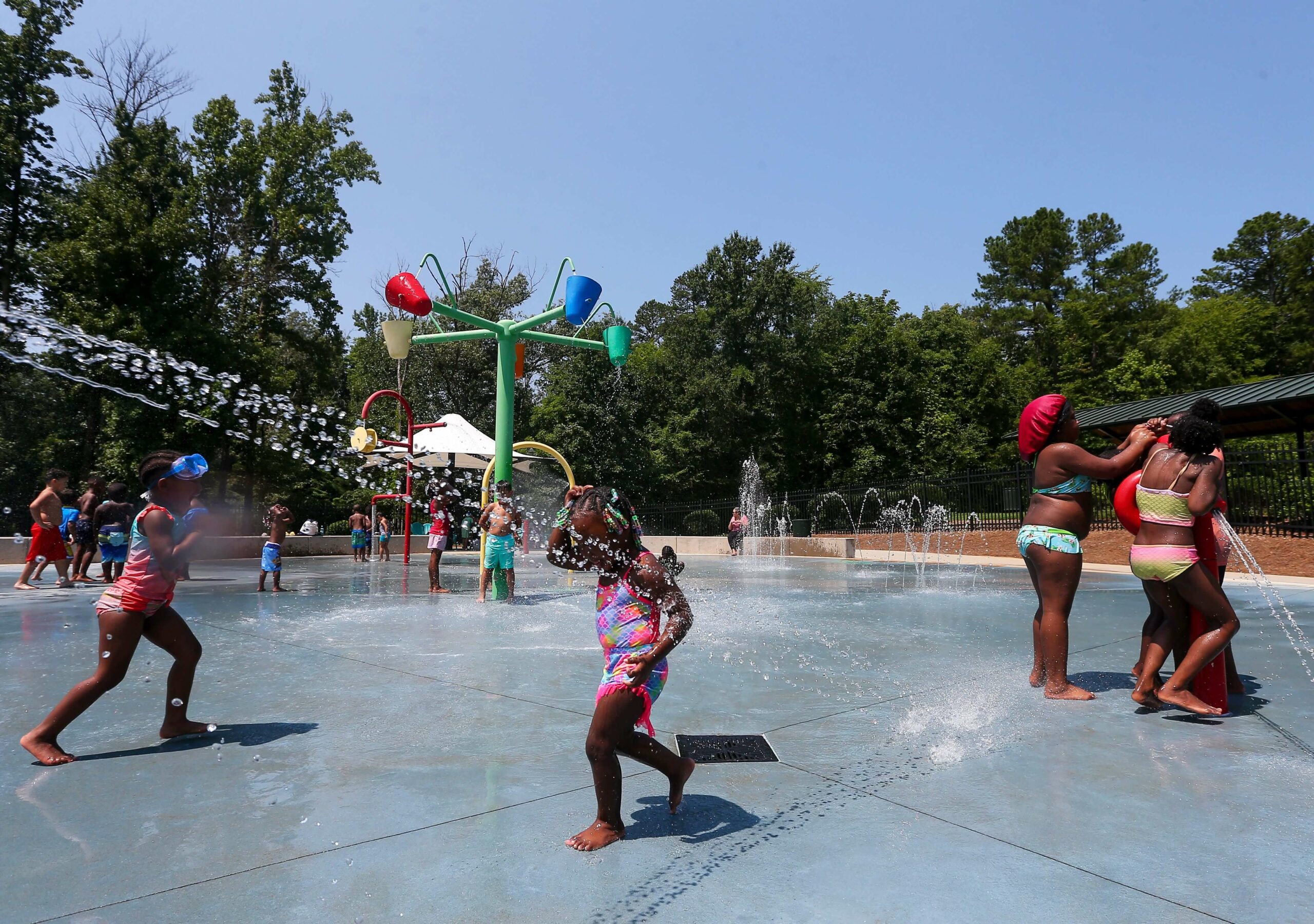 Barber Park’s sprayground provides hours of entertainment for tiny feet as they jump and dodge through fountains and waterspouts. photograph by City of Greensboro

When you visit Barber Park, don’t leave without stopping by Gateway Gardens.

At every turn, a new sense is satisfied: Larger-than-life sculptures of red, green, and yellow apples beckon children to crawl around inside; stepping stones lead to a vegetable and fruit garden; winding boxwood are manicured to create a four-foot-tall maze beneath sculptures of flying insects. Even the concrete walking path that connects exhibits is lined with colorful insect mosaics. 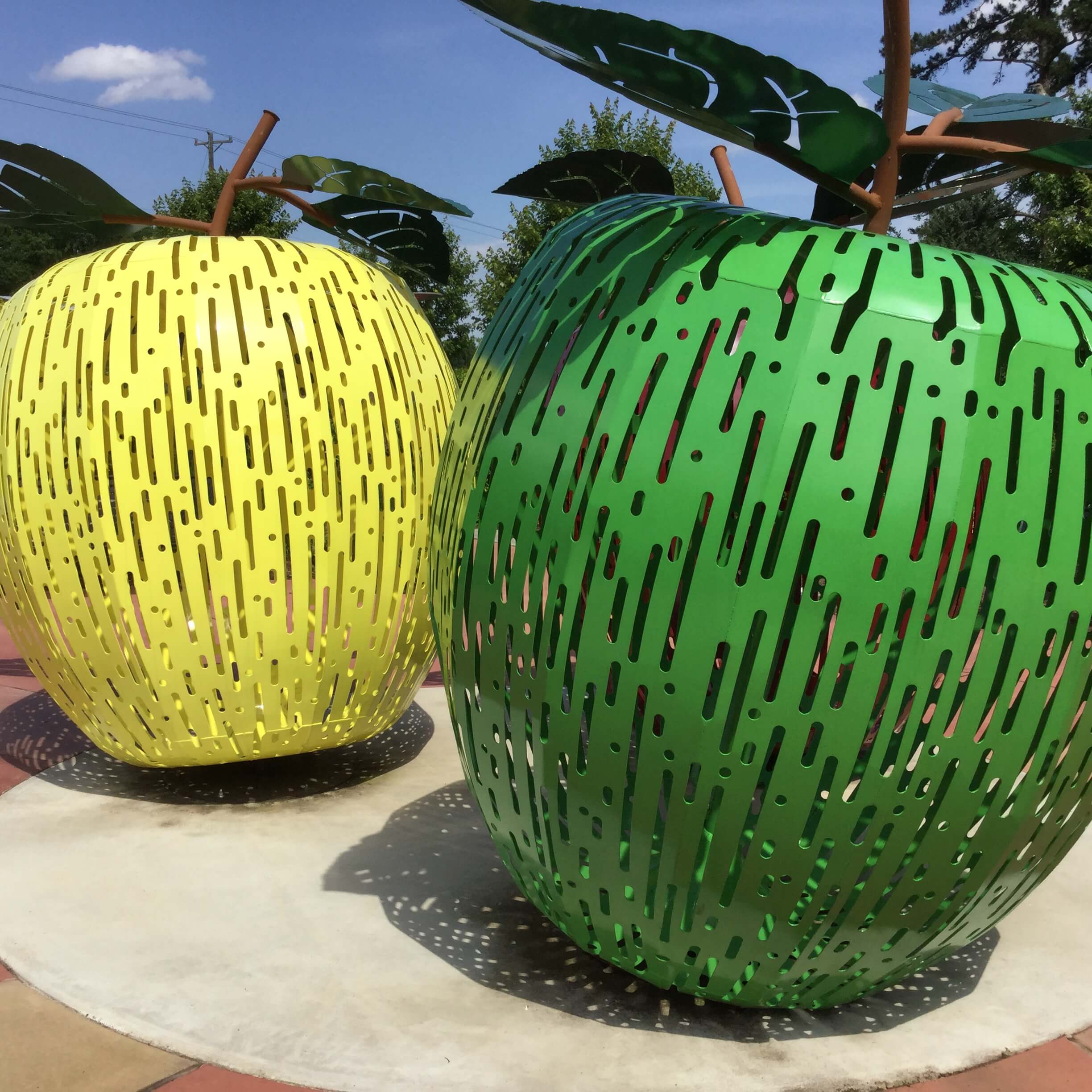 Larger-than-life sculptures of red, green, and yellow apples beckon children to crawl around inside at Gateway Gardens. photograph by City of Greensboro

A century after it was created, the 217-acre Country Park still feels true to its namesake, with expansive grassy fields that spill into mature forests. While its vertical merry-go-round is a distant memory, today’s visitors have access to two fishing lakes, pedal boats, and trails that thrill even the most avid hikers.

If you’re visiting with children, start with an easy walk around the lake — a 1.5-mile paved loop with lots of jumping-off points. About halfway around, little hikers can take a break to explore the playground. Walk a little farther, and you can access the neighboring Greensboro Science Center’s carousel.

On the north end of the lake, just beside the Veteran’s Memorial, meander down the short but tranquil Veteran’s Trail of Peace to Richland Creek. For a more challenging hike, try Country Park’s best-known Copperhead Trail. Also great for mountain bikers, this 3.2-mile trail features elevation changes, twists and turns, and the occasional deer sighting. 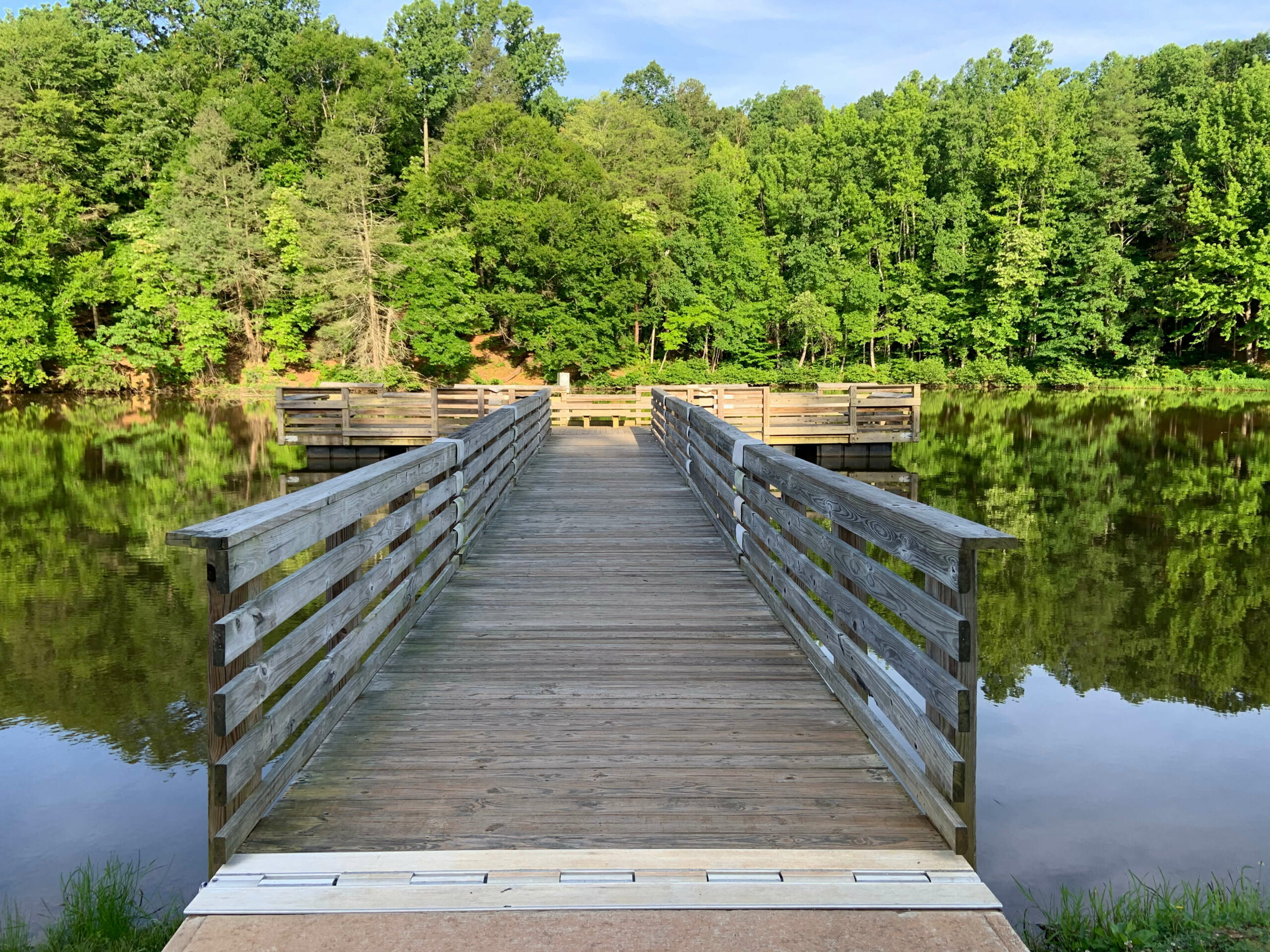 The 217-acre Country Park is full of expansive grassy fields that spill into mature forests and has two fishing lakes, pedal boats, and trails. photograph by City of Greensboro

Join a pick-up game of cornhole or ping pong (paddles and balls are provided). Play a round of Putt-Putt. Catch a concert or a movie night on the Great Lawn, under the canopy of Janet Echelman’s Where We Met aerial sculpture. Or let your kids run wild at the Children’s Garden, complete with a climbing wall, climbing boulders, and a sensory wall.

Whether you’re winding down or riling up, this is the place to do it. 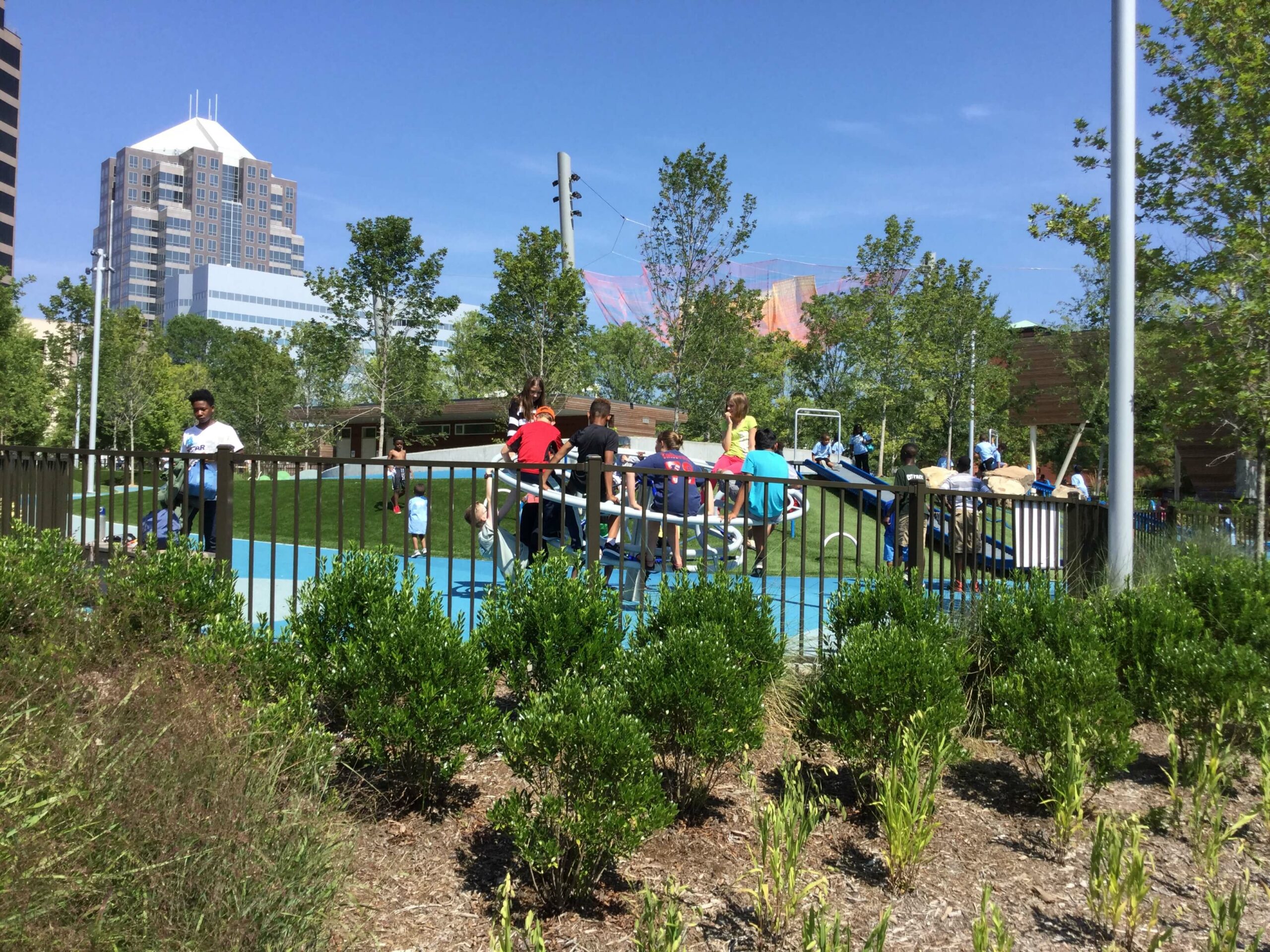 LeBauer Park draws families from all over town with games, movies, music, and a Children’s Garden. photograph by City of Greensboro

Greensboro’s earliest developers, wise enough to transform low-lying creeks and streams into parks around the city, unknowingly laid the groundwork for a signature project that would commemorate the city’s 200th birthday. The Downtown Greenway is a four-mile, paved trail that connects many of the city’s earliest parks.

At Tradition Cornerstone, Greensboro’s only public edible orchard yields strawberries in May, and in July you can pick figs, elderberries, and pears. Perhaps your best selfie bet is the Inside/Out bench, a metal and concrete settee designed as an outdoor replica of furniture at nearby Blandwood Mansion. And no need to resist the urge to stop at alluring destinations like Joymongers Brewing Company — just park your bike on the “onion bike rack,” designed by Guilford College students, and pop in for a pint. 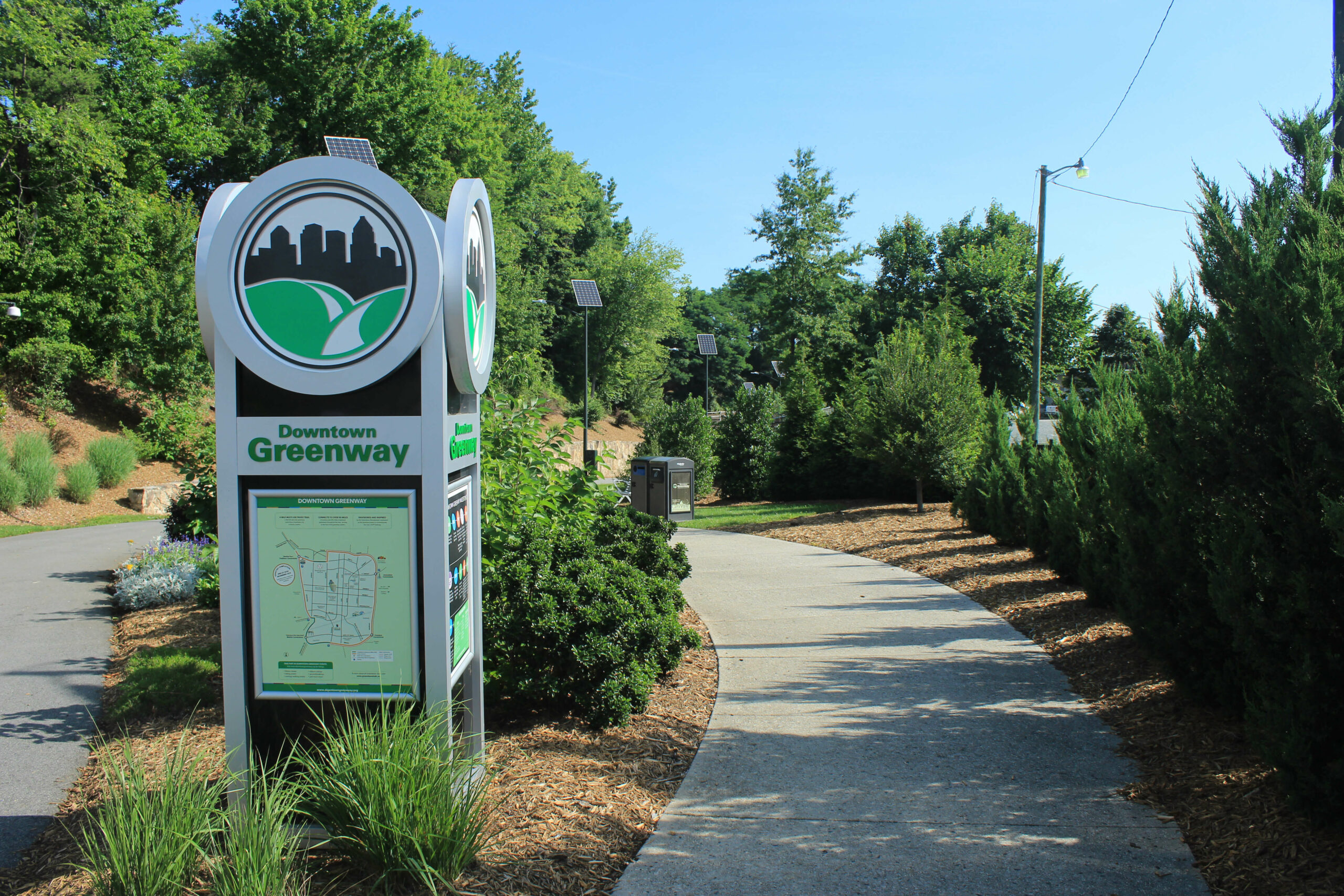 The Downtown Greenway is a four-mile, paved trail that connects many of the city’s earliest parks. photograph by City of Greensboro