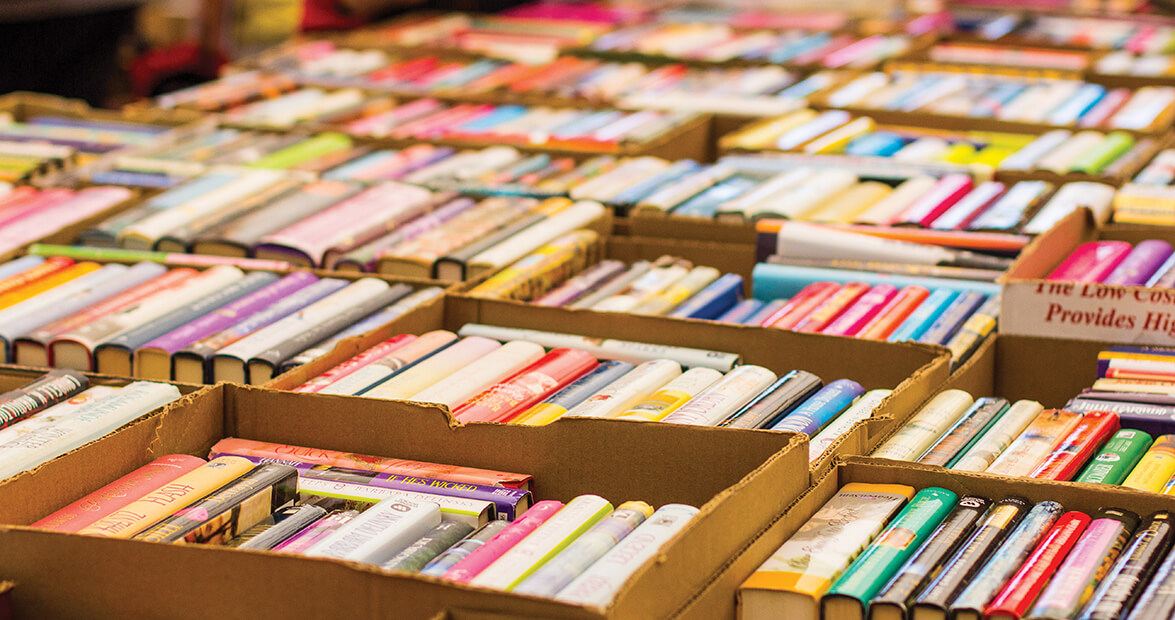 A book tells a story. There’s the one that’s written on its pages, of course, but there’s also the story of where the book has been — and where it’s going. A book may be worn from overuse or hardly opened when it’s put on the shelf at the Friends of Alamance County Public Libraries’ semiannual used book sale, but its pages are full of promise for a new home.

“I found a book on the history of worms,” says Barbara Roberts, Friends board member and co-chair of the book sale. “It just tickled me. I gave it to my brother-in-law, who fishes, for Christmas, and he was just delighted. It was such an obscure topic that when I found it, I thought, ‘Oh, I’ve got to have this.’”

Thousands of books stacked from the floor to the ceiling line the walls of the seven-room basement of Burlington’s May Memorial Library, and thousands more await their turn in boxes. Roughly 70,000 books, mostly donated, will be on display throughout the sale, and half of them will be swept up by customers looking for a bargain and a good read.

But, this year especially, these books mean more than that. The Friends hope to reach $1 million in funds raised for Alamance County’s five libraries. Just $23,000 more will get them there.

Friends of North Carolina Public Libraries has branches across the state, each dedicated to improving the quality of libraries through programming and new materials, but the majority of Alamance County’s public library funding comes from this sale.

In Alamance County, more than 50 volunteers sort through the books, figuring out which ones to keep, how to categorize them — and what to do with the items they find inside. Volunteers have found family photos, money, bookmarks, and love letters. For the more valuable items, they try to track down the owners, but the bookmarks they find are displayed for people to take for free.

“We give away several hundred bookmarks,” committee member Debbie Mann says. “They put them in those little stations so people can just pick whatever they want, which is a nice touch.”

Like the books, the bookmarks find a new home. They’re just part of the story, lost and found between the pages.

Friends of Henderson County Public Library • September 9-11, 16-17, 24
The Henderson County Public Library hosts the largest used book sale in the Southeast, with roughly 100,000 books organized into 100 categories. Ninety-eight percent of those books are donated, many coming from retirees who donate their personal libraries when downsizing. Over three weekends, the September sale raises around $60,000 for library programs and materials, including summer reading programs for all ages, digital subscriptions, technology updates, and more.

Friends of Chapel Hill Public Library • September 9-11
The Friends of Chapel Hill Public Library host book sales three times each year, in April, September, and December. At this month’s sale, they expect the total number of items for sale to be the largest ever. The Friends give the library more than $100,000 annually for operations and extra programs, including the Summer Challenge, which this year broke a community reading record.

Friends of the Onslow County Public Library • September 15-17
The three Onslow County Friends organizations host book sales throughout the year at several of their branches. In addition to the September sale at the Jacksonville branch, which is the largest, there are also two sales in February at the Jacksonville and Sneads Ferry branches, and monthly sales at the Swansboro branch.