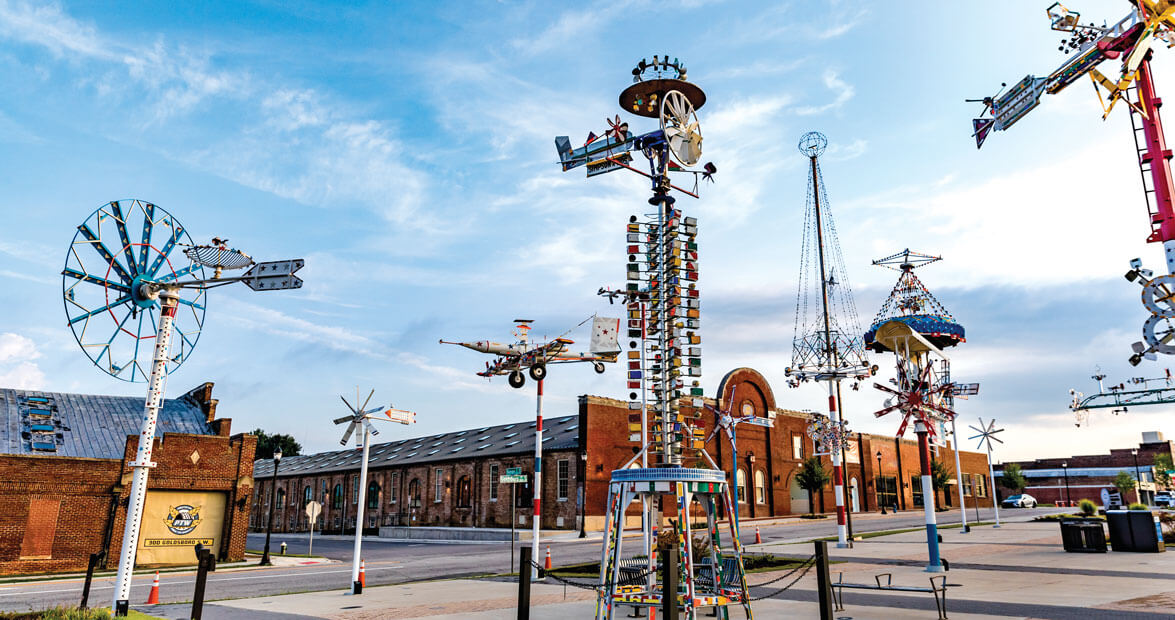 Dick Cozart runs his finger across a modern blueprint for a tobacco warehouse that his grandfather built in 1896. His family hasn’t been associated with the Wilson building since the late 1980s, but Cozart, more than most local folks, knows what the place looked like in its heyday. So he was tasked with ensuring that its authenticity was maintained during its transformation from the original Centre Brick tobacco warehouse into a brand-new commercial and residential space called Whirligig Station. “It’s got to look just like it did when we were selling tobacco,” he says.

Waukeshaw Development, Inc., a Virginia company known for turning historic buildings into contemporary spaces, began the $12 million conversion of this 60,000-square-foot warehouse back in 2011. Soon, a restaurant with alfresco dining will move into a lower corner of the building; a visitor center and museum will occupy another corner; and 94 apartments are nearing completion inside.

Across the state, tobacco warehouses are being rehabbed, refurbished, and, in the process, re-loved. The irony is that even though rehabbers are required to maintain the historical integrity of the buildings to get grant money, the structures must meet contemporary codes. In other words, those huge, beautiful, but unwieldy steel doors built into the brick walls won’t cut it as fire doors anymore. On the other hand, don’t think of putting pop-out mullions on those gorgeous, arched, multipaned windows. Cozart motions to one of the walls. “Those arched windows are where the trucks pulled in to off-load tobacco,” he explains. 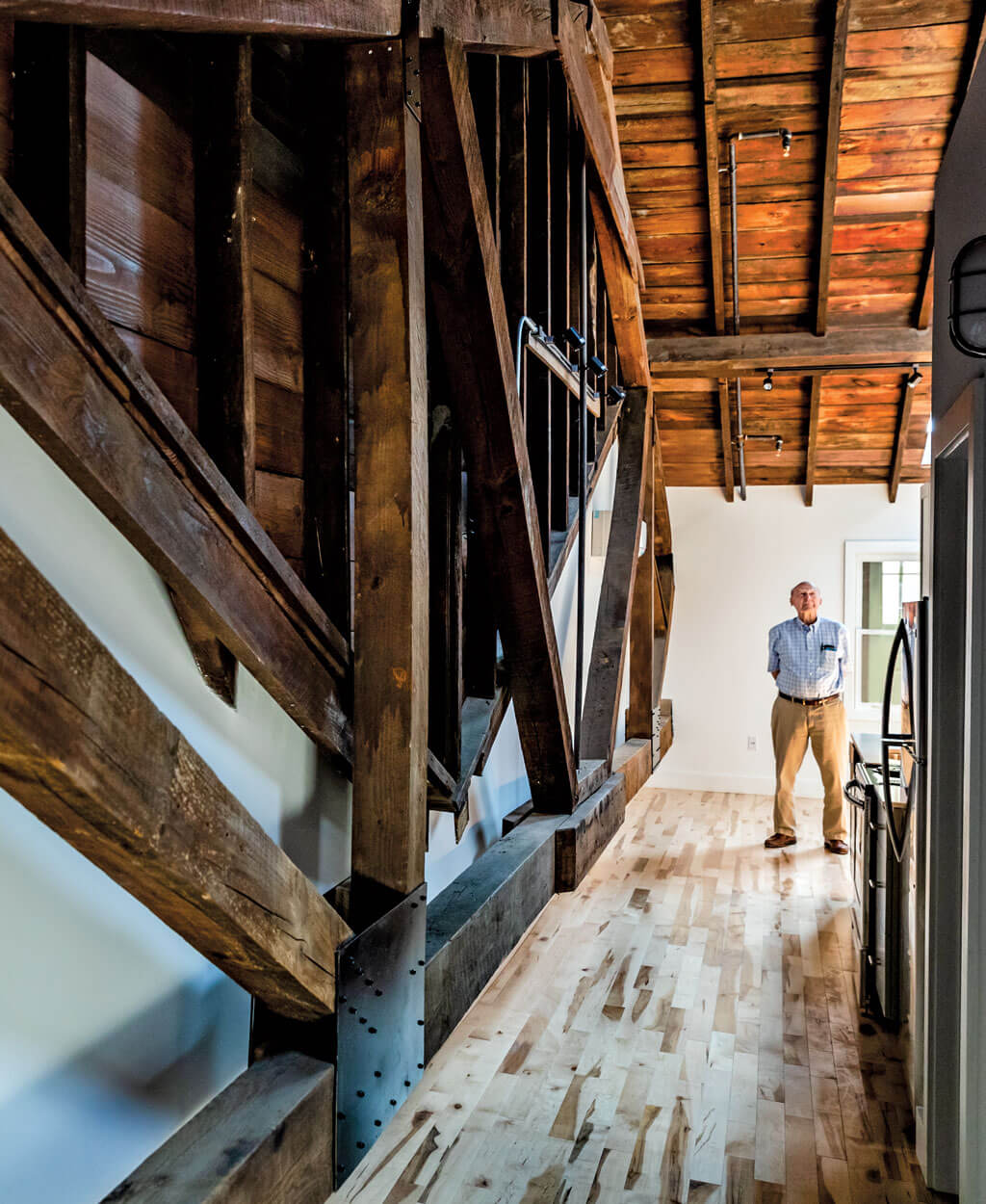 Dick Cozart spent his childhood working the auctions inside his family’s famous tobacco warehouse in Wilson. Today, he oversees the building’s restoration as it becomes a modern commercial and residential space. photograph by Charles Harris

Gazing down the hall that stretches from the front of the building clear to the rear, with apartment doors running along one side, feels a little like looking into architectural infinity. Glance up, and nothing impedes the view of the original trusses and the roof. And thick beams — perfectly sized and placed for a lamp, television, or books — run through each loft apartment.

Cozart, dressed in a crisp button-down shirt and khakis, is no longer financially invested in the building; he’s here only because he knows the brick edifice inside and out. At 85, he has seen — and grown and stored and sold — a lot of leaf tobacco. And he’s quite certain that Wilson was the center of the tobacco universe. “This is where it all started — before it got to Winston-Salem or Durham,” Cozart says. “This is where it was sold from the farm to the companies. Wilson was built on tobacco.”

By age 11, Cozart was already coming to the Centre Brick Warehouse during auctions, handing tickets to the ticket marker, tagging behind the auctioneer and the bookman, and running the tags to the office next door. That’s where the farmers would go to get paid — on the spot, in cash. He remembers when leaf tobacco came piled in baskets — and then, later, in bales. “You couldn’t squeeze it anymore and feel the oils,” he says. 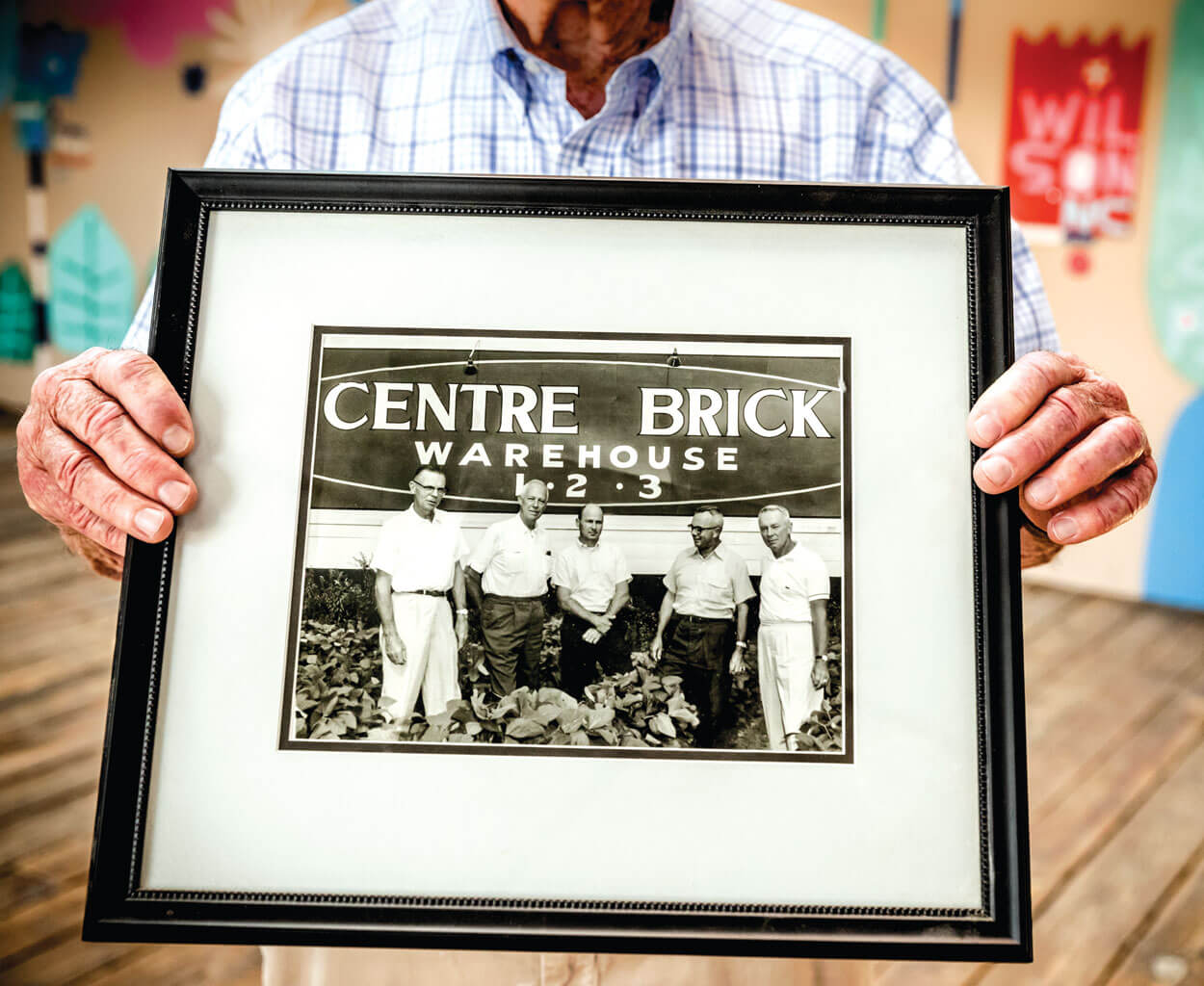 Cozart holds a vintage photo of himself (center) with his father (far left), uncle (second from left), and two partners standing amid tobacco plants. photograph by Charles Harris

In recent years, he’s been a member of the Wilson Chamber of Commerce and president of the Downtown Development Corporation. So it makes sense that Cozart would want Whirligig Station to look authentic. “Since I’m not going to the farm every day, checking on tobacco, or driving a tractor like I did for so many years, I’ve got to be doing something,” he says. “I believe in downtown. I just love to see things reused.”

“This is where it all started. Wilson was built on tobacco.”

Steps away from the warehouse is Whirligig Park, with its whimsical sculptures, themselves constructed of cast-off objects — a silver, red, yellow, and blue blur of breeze-generated motion. Before the late artist Vollis Simpson was known for his colorful whirligigs, he was a farm-equipment repairman. “I used to call him to come get some mangled part out of a combine,” Cozart says.

These days, Cozart makes daily visits to the Whirligig Station site, where he checks in to make sure the conversion is adequately representing Wilson’s storied tobacco history — as well as its future. When asked if he finds it difficult to watch the transformation of a property he knew so well, one that housed his family’s business for nearly a century, he says no. Not as long as it continues to look just like it did when his family sold their golden leaves in this warehouse in what was once known as the world’s largest tobacco market.

Wilson folk artist Vollis Simpson’s whirligigs prove that creativity can come from any source. In 1984, he began collecting scraps of farm machinery and creating the lively sculptures that are now the centerpiece of Whirligig Park. Each year, the town welcomes fall by celebrating the late artist’s works during its annual Whirligig Festival, running this year from November 1 through 3. There will be three stages featuring music, and food vendors everywhere.  — Meagan Pusser