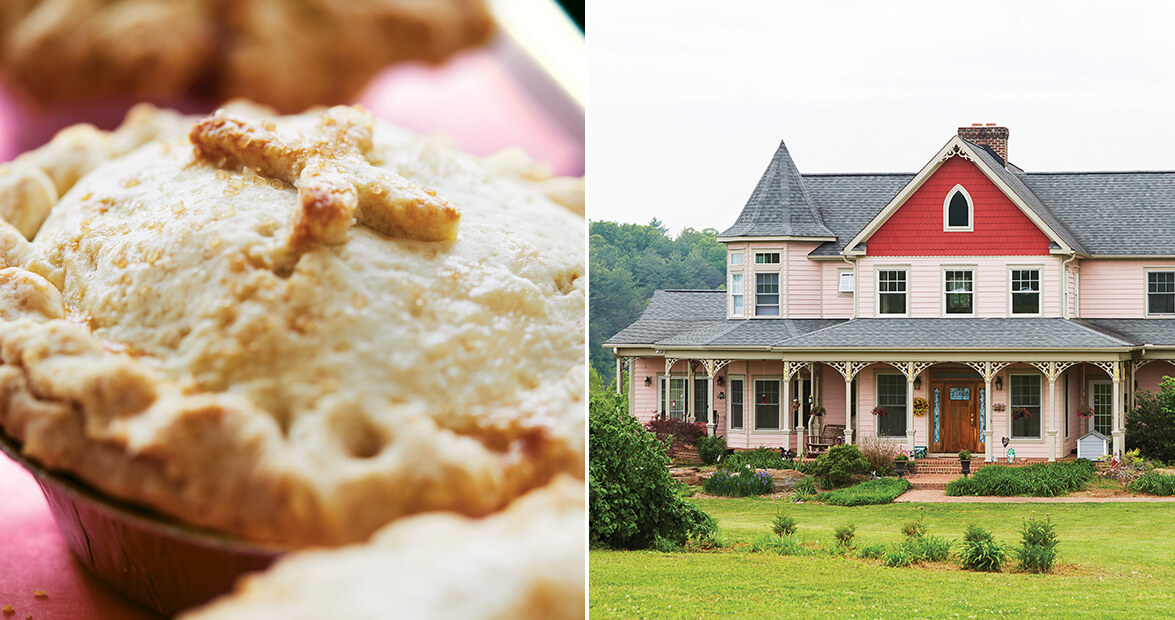 Flour footprints lead from the kitchen throughout the pink Victorian home. Bushels of apples line counters and take up temporary residence on replica antique furniture, much to the dismay of a couple of dogs and several cats.

Pots of apple slices simmer as Angela Shur shapes pie crusts. A bell sounds, pulling her away from her kneading. She moves several pies to cooling racks so that another set can take their place in the hot oven. Angela resets the timer, and returns to assembling more pies.

It’s a familiar routine, but one that Angela could not have envisioned back in 2010, when she and her family of five moved from the traffic and congestion of Long Island, New York, to their dream farm just outside of Mount Airy. 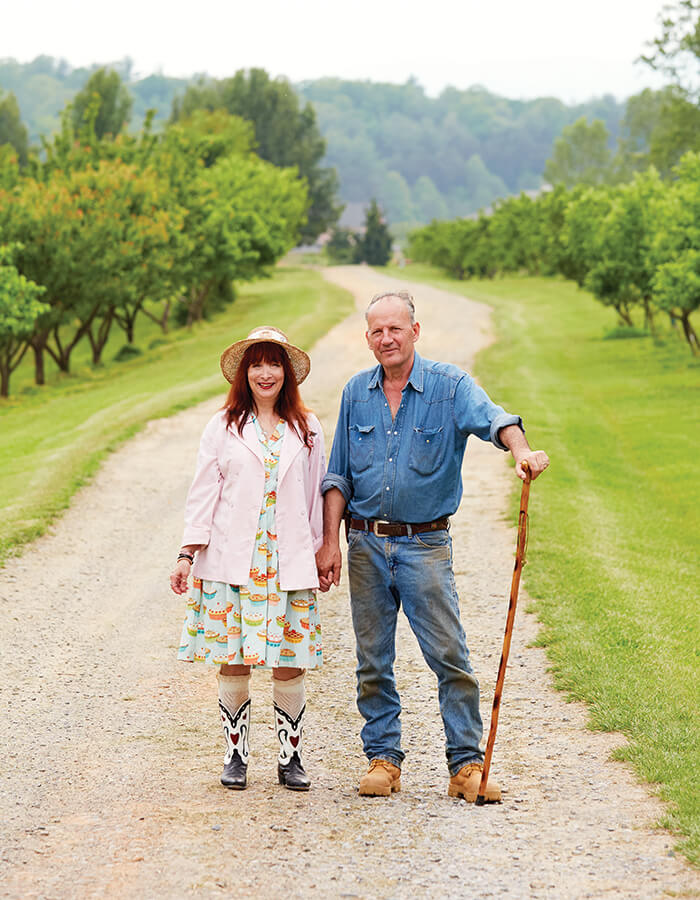 The Shurs didn’t set out to be apple growers or pie makers. But their shared love of farming and baking has led them down an unexpected and rewarding path. photograph by Stacey Van Berkel

Angela started her new life in North Carolina as an assistant teacher in the Surry County school system, where her students nicknamed her Miss Angel. She resigned from teaching after her weekend hobby of baking apple pies grew into a small window bakery at Shelton Vineyards, and eventually a storefront on North Main Street in Mount Airy — all within a year.

Angela’s path to becoming a professional baker didn’t really begin in the kitchen, though. It started in an orchard. Her husband, Randy, a semiretired farmer, had planted 100 fruit trees, including peach, apricot, and plum, on the slopes of their new farm, which eases toward a tributary of the Yadkin River. Pruning, fertilizing, and care resulted in healthy trees that produced plenty of fruit within a few years. And while this was good news, the Shurs’ first few seasons at local farmers markets revealed a harsh reality: The produce markets in the Foothills were flooded with apples. Randy decided to uproot and replace the dwarf apple trees with more plum and peach varietals.

But the apple trees had an advocate in Angela. “I was not about to let him uproot living, breathing trees!” she says. 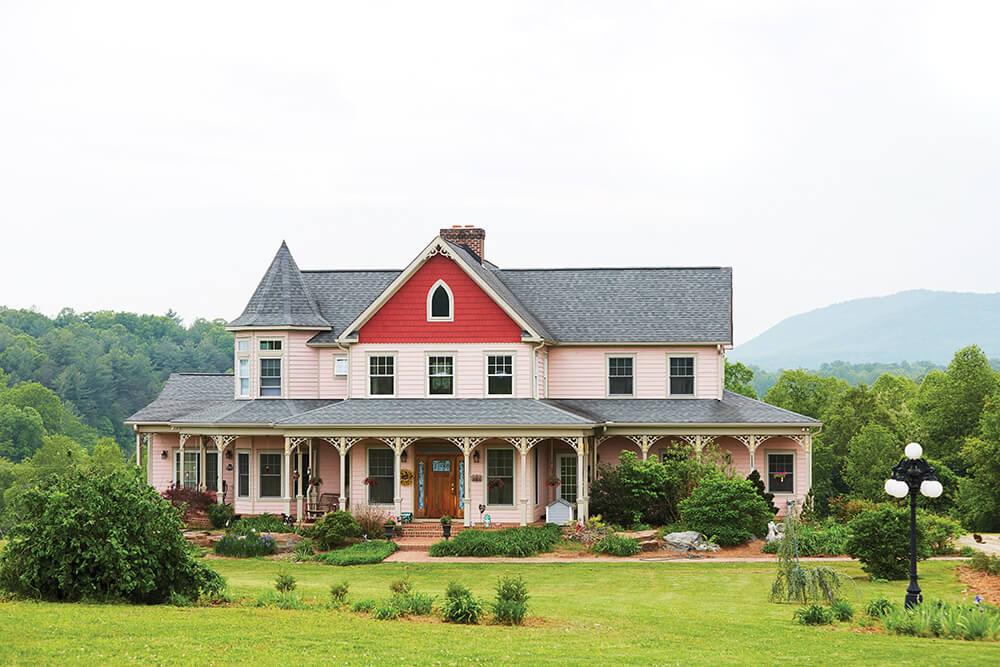 Many of the creations sold at Miss Angel’s Heavenly Pies began as experiments at the Shurs’ Surry County home. photograph by Stacey Van Berkel

Angela offered a compromise: Rather than try to sell baskets of apples, they could combine her love of baking with the overabundance of fruit. In a kitchen filled with sacks of flour and bushels of apples, she baked her way to a reprieve for the trees.

On North Main Street in Mount Airy, the aroma of fresh dough and baked fruits lures passersby into Miss Angel’s Heavenly Pies. Here, Angela, dressed in vintage pink outfits and a wide-brimmed hat, waits on customers and keeps up with the demands of a popular bakery’s kitchen.

A mom pushes a stroller through the doorway. The dad follows with two more kids. The parents discuss snacks as well as take-home treats. “Would you like some ice cream?” Angela asks the children. They follow Randy to the Shurs’ ice cream shop next door for free samples, giving the mom and dad a brief respite. By the time the kids return, Jennifer Wright, Angela’s assistant, has stacked several pink boxes next to the register. A blackberry pie for company. Two five-inch, lattice-topped apple pies to be enjoyed after the kids fall asleep tonight. A cheese Danish for Sunday morning.

The mom asks about the sonker. “You want a taste?” Angela asks. Not waiting for a reply, she hands the mom a spoonful. Sonker is similar to fruit cobbler, made with a regionally distinctive recipe. The shop’s moonshine peach sonker is part of the Surry Sonker Trail. After taking a bite, the mom adds a healthy helping of the dessert to her order.

When you perfect a recipe, you don’t tinker with it — unless you’re Angela. Ever the problem solver, she created an entire line of gluten-free pies, muffins, and breads for customers. Her inspiration was Jennifer, who is gluten-intolerant.

Creating gluten-free substitutes, however, was a challenge. “The first was a disaster,” Angela says of her early attempts at a gluten-free pie. “But I kept at it and finally got it.” She continued to tinker and test until she arrived at gluten-free recipes that were as enticing as her originals. She expanded her business to start the Hillbilly Gluten-Free Bake Shop and Creamery. 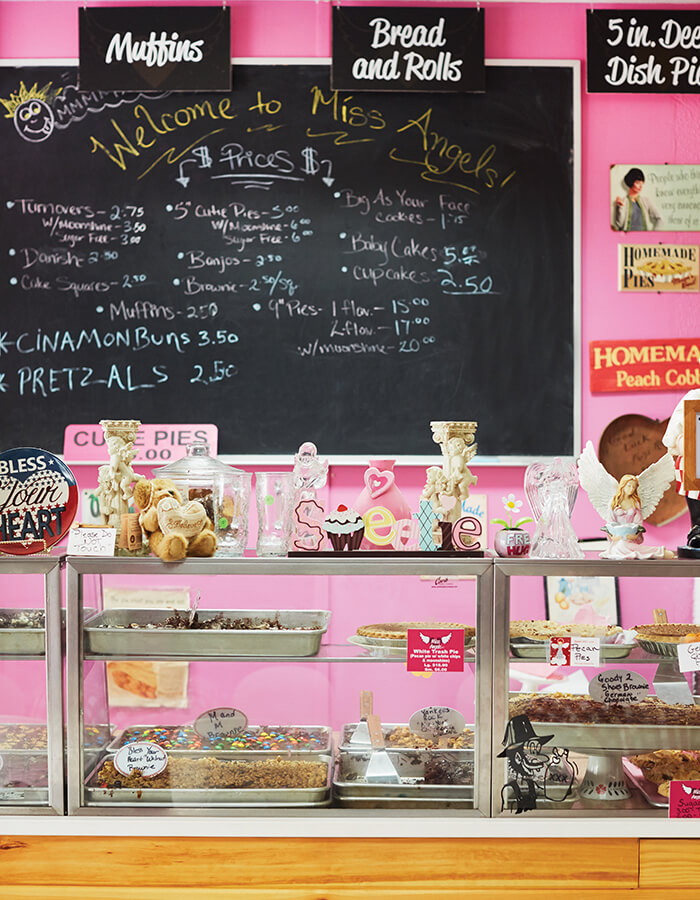 Fans of Miss Angel’s Heavenly Pies often give their favorite baker angel-themed knickknacks, which find a home on top of the bakery’s display cases. photograph by Stacey Van Berkel

Although it’s legal to use moonshine in baking, different laws apply when the alcohol’s churned into ice cream. Customers who buy moonshine-infused scoops of “Miss Angel Lost It Strawberry” or “Road Kill Peach” have to show ID.

Five years ago, five pies led to 50 pies, which led to 500 pies, which saved a couple of rows of apple trees. Now, every morning, Angela can be found in the bakery, and Randy can be found with a farmhand, tending to the trees. In the evening, though, after Angela and Randy wipe down the kitchen, close out the registers, and lock up for the night, the pair make their way back to the farm together, where an orchard of 1,200 fruit trees welcomes them home.