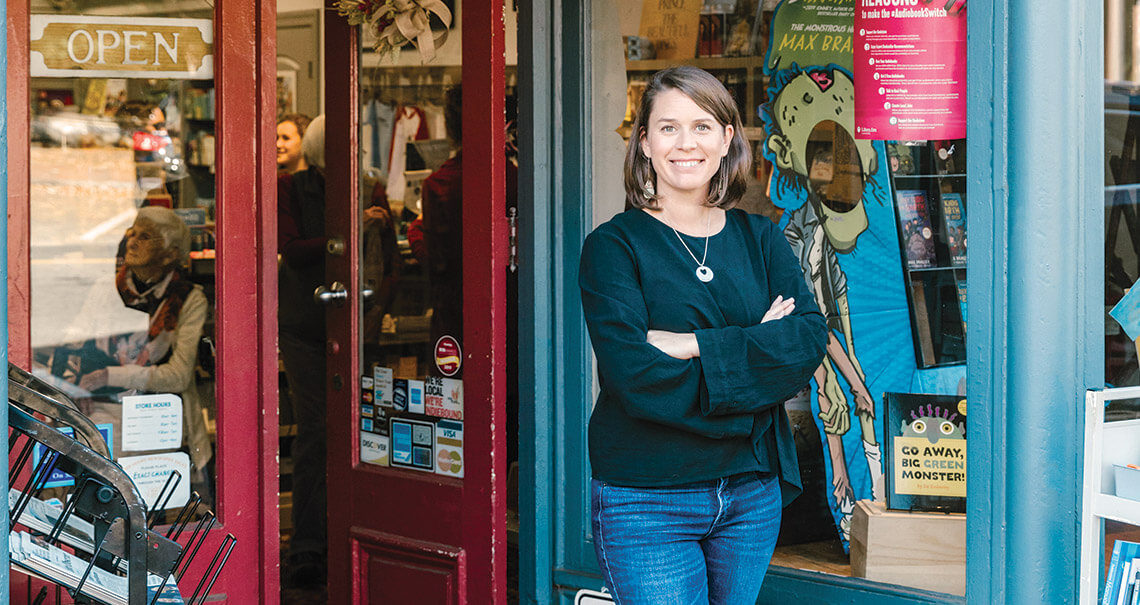 In the winter of 1901, a fire swept through downtown Davidson. Many businesses were lost, but a young man named Archie Brown salvaged bricks from the ashes to build a new general store right across Main Street from the town’s namesake college. “Archie Brown’s General Store was one of Davidson’s earliest gathering places,” says Adah Fitzgerald, co-owner of Main Street Books. The independent bookstore has occupied the first floor of Brown’s old building since 1987. Surrounded by more than 10,000 colorful hardcovers and paperbacks, Fitzgerald points to a dark stain in the original hardwood floor. “There was a woodstove back here where people would come in off the street and chat,” she says.

Today, the oldest building in the business district is a bustling gathering place once again, thanks to Fitzgerald, who bought Main Street Books with her mom, Mary Barone, in 2015 and turned it into a bright, modern, communal space. Now, Fitzgerald manages a staff of eight and an active events calendar. Local authors launch their books here, including Davidson’s Megan Miranda, whose novel The Last House Guest was one of Reese Witherspoon’s book club picks in 2019.

On a Sunday afternoon, elms and oaks filter sunlight through the store’s floor-to-ceiling display windows. Three families are huddled together in the children’s section, a retired couple is browsing the “local author” shelves, and employees are moving furniture to make room for an art club meeting. “I love being in the store all day, every day, and seeing the stream of people coming in and out,” Fitzgerald says. “Davidson used to be more of a bedroom community, but now, thanks to all the shops and restaurants and music, it’s a vibrant community and a destination in its own right.”

A Q&A with Adah Fitzgerald,
owner of Main Street Books

OS: Of the many book signings you’ve hosted at Main Street Books, do you have a favorite?

Adah: There have been so many highlights over the years, but in 2018, we secured David Sedaris for a signing. He loves independent bookstores, and sometimes when he releases a new book, he just wants to visit small, independent bookstores. With his event, we filled the bookstore, but we had overflow spots for people to sit out in our parking lot. We piped in sound back there and basically had a block party, so everyone could hear. It was so much fun! Another highlight was our event for Mesha Maren. She teaches at UNC Chapel Hill, and her debut novel, Sugar Run, was this very gritty Southern noir — there were so many dive bars throughout her novel, so we hosted the book event at Hattie’s Tap & Tavern in Charlotte. We knew that there’s this mythical law that Davidson people don’t like all the traffic between Davidson and Charlotte, so we thought that people might balk at the idea of getting in rush hour traffic to attend the event … so we got a party bus and bused the author and half of the guests to Charlotte!

OS: What have your virtual events been like during the past year?

Adah: I’ve been amazed by the response toward virtual events from our community. Vivian Howard hosted a virtual cooking experience with us, which wouldn’t have been possible in person, but it was a huge success — everyone loves her. Interestingly, we’ve found that many people prefer to engage with us online. For some people, showing up to an author event might feel intimidating or out of their comfort zone, but this virtual space kind of collapsed some of those barriers and provided some needed community for people who were spending time at home.

OS: What books are on your local author shelf?

Adah: One of our favorites right now is The Girls in the Stilt House, included in “Five September Book Picks.” The author, Kelly Mustian, is based in Denver, so we’re essentially neighbors. And we’ve got Lisa Williams Kline — she’s got a YA book called One Week of You. It’s a teen love story, and Lisa’s just a gem. We’ve got some Hope Andersen books on the shelf, like How to Remodel a Life, and we have The Value Of Rotting Pumpkins by Colleen Thrailkill — it’s a memoir about teaching that includes these beautiful, instructional essays. And we always have lots of Tony Abbot, who sadly passed away last fall and was a teacher at Davidson. He was such a wonderful poet.