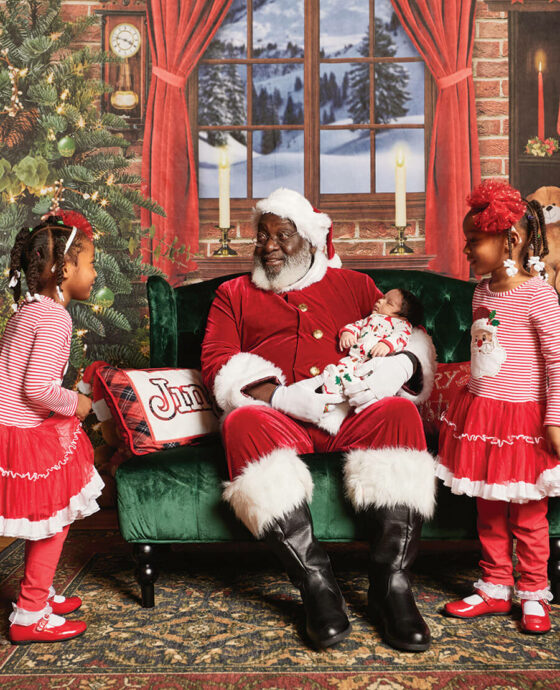 By the time Joe Griffin retired as a driver for the Wake County Public School System a handful of years ago, his lush beard had turned snowy white. One day, a stranger approached him in the supermarket and told him he looked like Santa Claus. “He said, ‘Ebony Santa Clauses make at least $75 an hour,’” Griffin remembers. “I said, ‘Wow! Just to go ho-ho-ho?’” 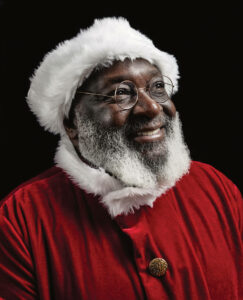 Before he was Santa, Joe Griffin was a substance-abuse counselor for many years in his native New York. That experience, he says, helps him to be a better listener as jolly old St. Nick. photograph by Alex Boerner

Five years later, Griffin works for Santas Just Like Me, an organization that employs Black Santas at holiday events across North Carolina. Nowadays, when Griffin shows up at places like the Hayti Heritage Center in Durham, he struts about in his Santa suit, singing and joking with children and their parents; but most of all, he listens. Griffin loves the reactions that he gets from kids who eagerly anticipate his arrival. “I come out dancing and laughing,” he says. “And you know what? If I can get you laughing, I’ve got you.”

On this December day, the atmosphere at the Hayti feels electric. Despite a chilly drizzle outside, the curved and gleaming pews in the 131-year-old former church are packed with single-parent, nuclear, and multigenerational families. Some wear matching T-shirts emblazoned with their last names — the kind you see at family reunions. Others are in their Sunday best. Fidgeting siblings bump each other’s shoulders, the maximum roughhousing that parents will allow today. But patience is wearing thin. After waiting for what seems like an eternity, the toddlers are struggling to hold it together.

Then, suddenly, the Jackson Five’s version of “Santa Claus Is Coming to Town” booms from a pair of mounted speakers, and Santa Joe bursts into the spotlight, a one-man party in bright red and white. “There’s Santa! There’s Santa!” the kids squeal, dancing as hard as if Beyoncé had just arrived. “Come to my house!”

Griffin waves, ho-ho-ho’s, and two-steps to the beat while families line up to take holiday portraits with him. Santa Claus has arrived.

To these children, Santa is a star — bigger than Beyoncé. But for most kids, and for most of American history, the big man has only ever looked one way: white and rosy-cheeked. That’s changing. Black Santas have begun popping up at more and more holiday events in recent years, although mostly at churches, community centers, and municipal events in major urban areas that cater primarily to Black patrons. For the past two years, Joni Williams has driven her 3-year-old daughter, Mari, and her mom, Loretta Holcomb, almost four hours from Spartanburg, South Carolina, just to see Santa Joe at the Hayti. “We want Mari to see things in her own image — Black Santa, Black Easter Bunny, everything — so that she doesn’t count herself out of possibilities,” Holcomb says.

Griffin and other Santas of color have also seen an uptick in booking requests from community organizations serving broader audiences. In 2021, more than a dozen public events across North Carolina advertised Black Santas, and it was a major draw. Matthew Chaundry, who is white, took his children to Jingle Jam, a celebration the previous week in Charlotte that featured a Black Santa. Chaundry says that he wants his kids to see a variety of Santas. “It’s very important that they understand that not everyone looks the same,” Chaundry says, “but that everyone is the same underneath.” 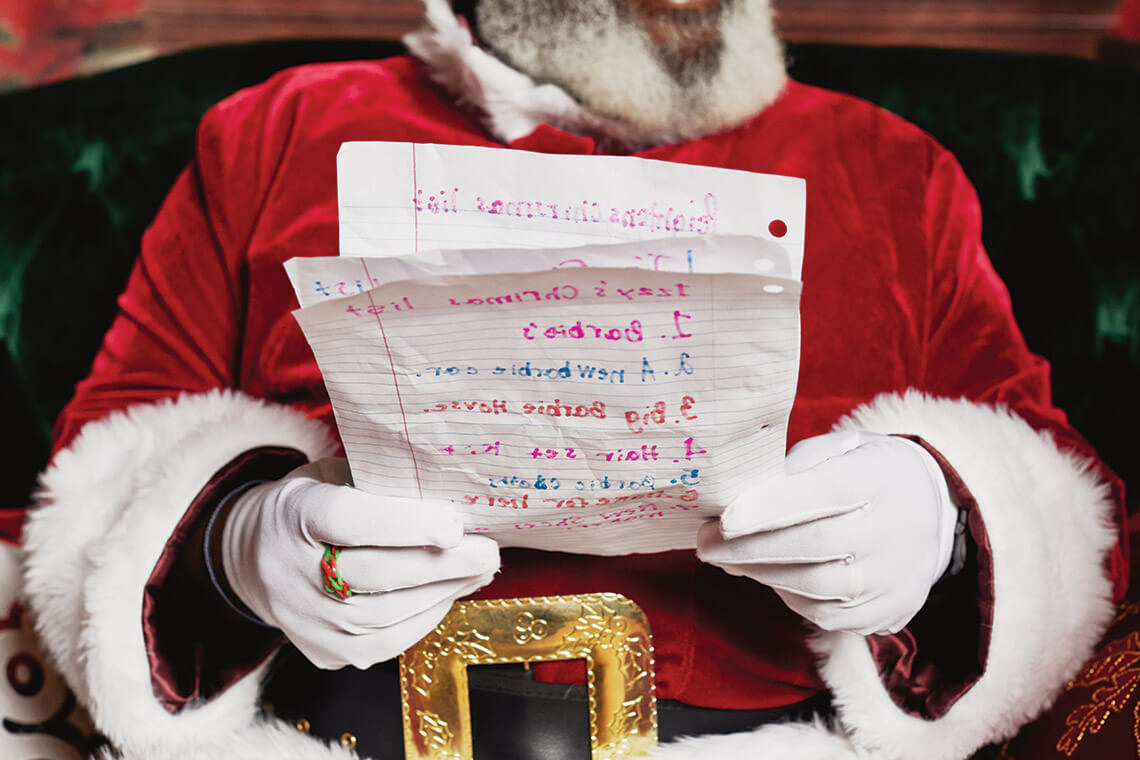 The children’s Christmas lists may not be typed and double-spaced, but Santa Joe still dutifully reads every creatively spelled word on them. photograph by Alex Boerner

Before the turn of the millennium, news records in North Carolina mentioned Black Santas only sparingly. “Negroes’ Parade Had Black Santa,” the Charlotte Observer reported in 1968. “Store Tries Black Santa,” announced a 1974 headline in the Statesville Record. A shift began in the late ’90s, when Black Santas like Larry Hardy started appearing at places like Freedom Mall in Charlotte.

If Black Santas worked regularly anywhere in the state during earlier eras, it was likely right here in the Durham neighborhood surrounding the Hayti Center. Originally St. Joseph’s AME Church, the building was constructed in 1891 in the heart of what was then one of the most affluent Black communities in the country. Black businesses, notably North Carolina Mutual Life Insurance Company, fueled that prosperity and could afford their own representation when it came to hiring Santas.

And studies show that representation matters in building healthy identities — regardless of what race a particular child is. Exposing children to a broader worldview “changes the perspective of what people believe” about themselves, Griffin says. “Santa can be anything you want.” 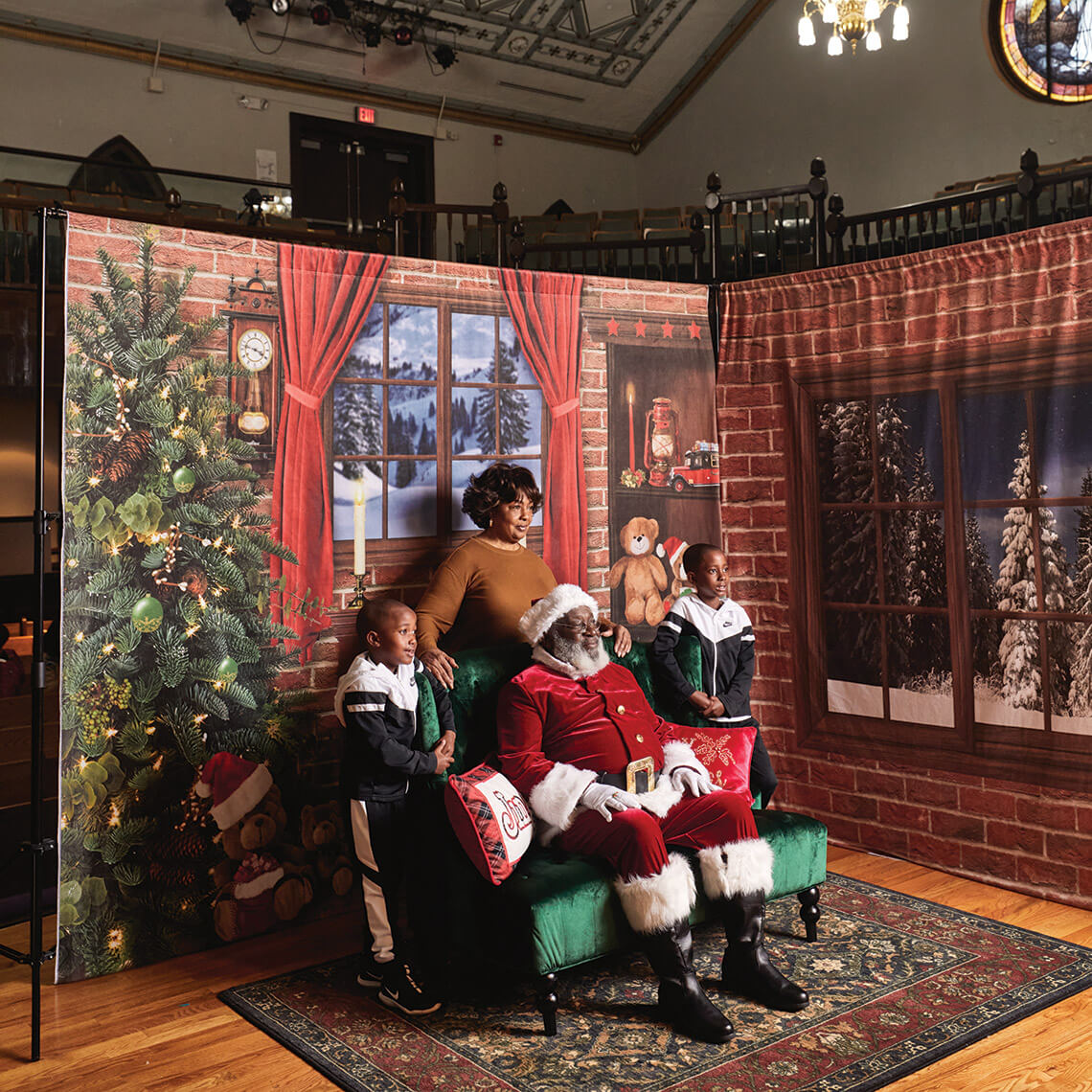 Latoya and Kevin Patterson have been bringing their children — 11-year-old Varonica, 7-year-old Keona, and 3-year-old Landyn — to Black Santa events since they were infants. “We’re in a time where you need to see images of things that look like you,” Latoya says. And not just fictional characters, she points out — professionals, too. “Sometimes you don’t see a lot of Black physicians and you believe that Black people can’t be physicians,” she says. “So this is important.”

To Varonica, Griffin is the real Santa Claus. She remembers meeting him the previous year, and when she approaches him with an enthusiastic but serious look on her face, she expects him to remember her. After all, she says, “We put up cookies and he ate them last Christmas. I was good that year!”

Perched on a green velvet sofa set in a makeshift living room scene on the Hayti’s stage, Santa Joe is getting silly with the kids, making up replacement lyrics to traditional Christmas songs and playing practical jokes. An energetic boy of about 5 hops on his lap and takes a deep dive into his holiday wish list, explaining in great detail the video game that he hopes to receive. Santa Joe listens intently for several minutes before pretending to doze off. Awaking with a snort that tickles the boy to no end, Griffin then shoots a wink at the parents.

It’s not just kids who want a turn on Santa’s knee. Sometimes adults do, too. From them, Griffin mostly hears wishes for a new house, a better job, or improved family relationships. He doesn’t judge — he just lets them talk. “I think it’s about someone listening,” Griffin says of his job, “even if it’s just for a moment.”

A few of the attendees require a little more convincing to get into the spirit — sullen teens too cool for Santa pics. But Santa Joe won’t hear of it. “You’re taking selfies all day anyway,” he teases them with a hearty ho-ho-ho. “I have to remind them,” he says, “that it’s just memories that you will enjoy later on. So come on, enjoy.”