The teenage girl standing in the middle of Pura Vida Worldly Art in Charlotte has electric blue hair, which means that she fits right in. The store is a riot of color and international energy: bright red and aquamarine walls, purple necklaces from Uganda, yellow kites from Indonesia, a rainbow of Kenyan soapstones inscribed with “Freedom” and “Mother” and “Love.” She holds up a handblown glass goblet made in the West Bank to show her friend — another teenage girl, with lavender braids — and says, “I haven’t been in here in so long!”

Behind the counter, Teresa Hernandez beams at them. She’s wearing an embroidered peasant blouse, accessorized with chunky eyeglasses and big golden earrings. “My favorite type of customer is eager to learn,” she says. “I love children because they come in and play, and then they get really excited when I tell them about a product.” She pauses to reflect, then smiles. 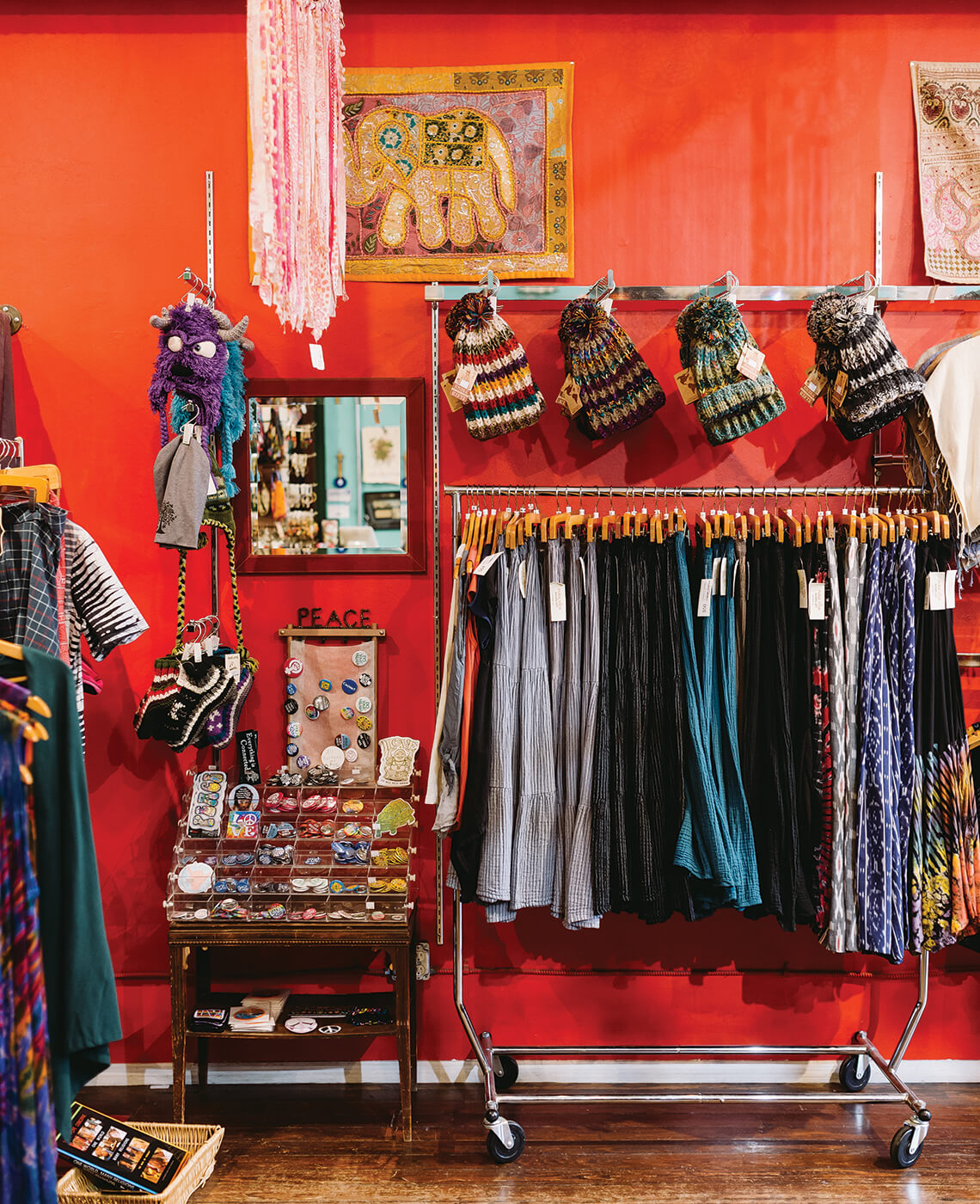 “Yesterday, I had a couple of boys come in, and they read one of the signs and said, ‘Look, this is made out of recycled T-shirts!’ And I said, ‘Did you see the journals made out of elephant poop?’ And their eyes got really big. I hope that encourages them to be more creative and to see things differently. They can take things from anywhere and create something themselves.”

Hernandez, 50, was born in Mexico, grew up in Dallas, and got her MBA at the University of Texas at Austin before moving to Charlotte in 1998 for a lucrative job at a consulting firm. “I never wanted to be a business owner,” she says. “Why would I want to stress myself out?” But after the September 11 terrorist attacks in 2001, she reassessed her priorities and realized that she didn’t need so much money and was willing to take a risk. “What’s the worst thing that could happen — I lose my house? OK, I can move to a smaller house.”

She had been hoping somebody would open a store that would be a center of culture and international art, and finally, realizing that it was up to her to do it, Hernandez quit her corporate job. “I thought it was a win-win,” she says. “I wanted to create a venue for artisans in poor countries to sell their wares. The customer gets something beautiful, and the artisan gets to keep making it.” The name “Pura Vida” — a popular saying in another Spanish-speaking country, Costa Rica — translates idiomatically as “life is good.” And that’s the message Hernandez hopes to convey: “I wanted people to feel good when they came in my store and feel good when they left.”

The store was a learning experience for both Hernandez and her customers as each discovered what the other liked. When Pura Vida opened in 2004, she stocked a lot of hojalatas — beautifully crafted Mexican tin art — but discovered that they didn’t fit the aesthetic of many houses in Charlotte. “Most of them ended up in my home,” she says. 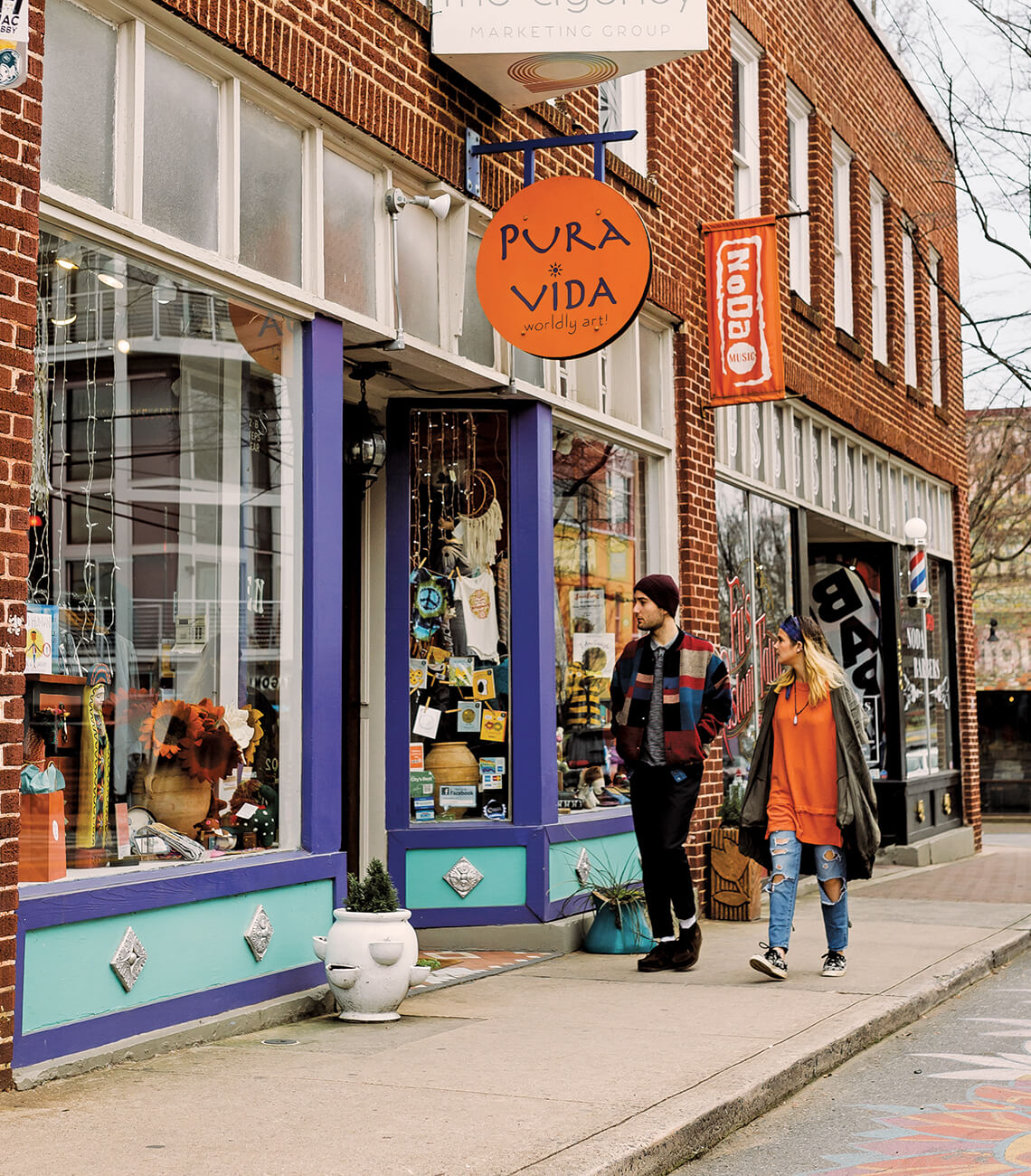 The shop is at the heart of Charlotte’s NoDa arts district, situated, perhaps appropriately, just around the corner from NoDa Yoga. photograph by Joshua Vasko

Some of Pura Vida’s customers visit the store for reasons that don’t involve shopping. After her first year in business, Hernandez erected a shrine for el Día de los Muertos, or the Day of the Dead, the Mexican holiday that pays tribute to the departed. It became a permanent fixture in the store. So many people contributed photographs of their friends and family and pets that Hernandez had to bring in a trellis from her home garden to display everything — not just the snapshots, but also offerings like cigarettes and bottles of Jarritos soda. She’s proud to tell people about how the shrine is part of her Mexican heritage, and to teach them about a tradition that spans the world, from Europe to Southeast Asia.

Of the thousands of items in the store, from shirts to books to dryer balls, her favorites are the Tibetan singing bowls — inverted bells that produce resonant tones when a mallet is rubbed around their rims. “It’s a way for me to connect with my customers, because we’re doing something together,” she says. “I see them relaxing and lighting up.” Some customers ask if their pastor would approve: Does this go against their Christian faith? Hernandez smiles kindly. “I tell them that some bowls have a Buddha on them, but some of them are plain,” she says. “It’s just a tool to get you in a zone of relaxing, like drumming or cooking or gardening.” 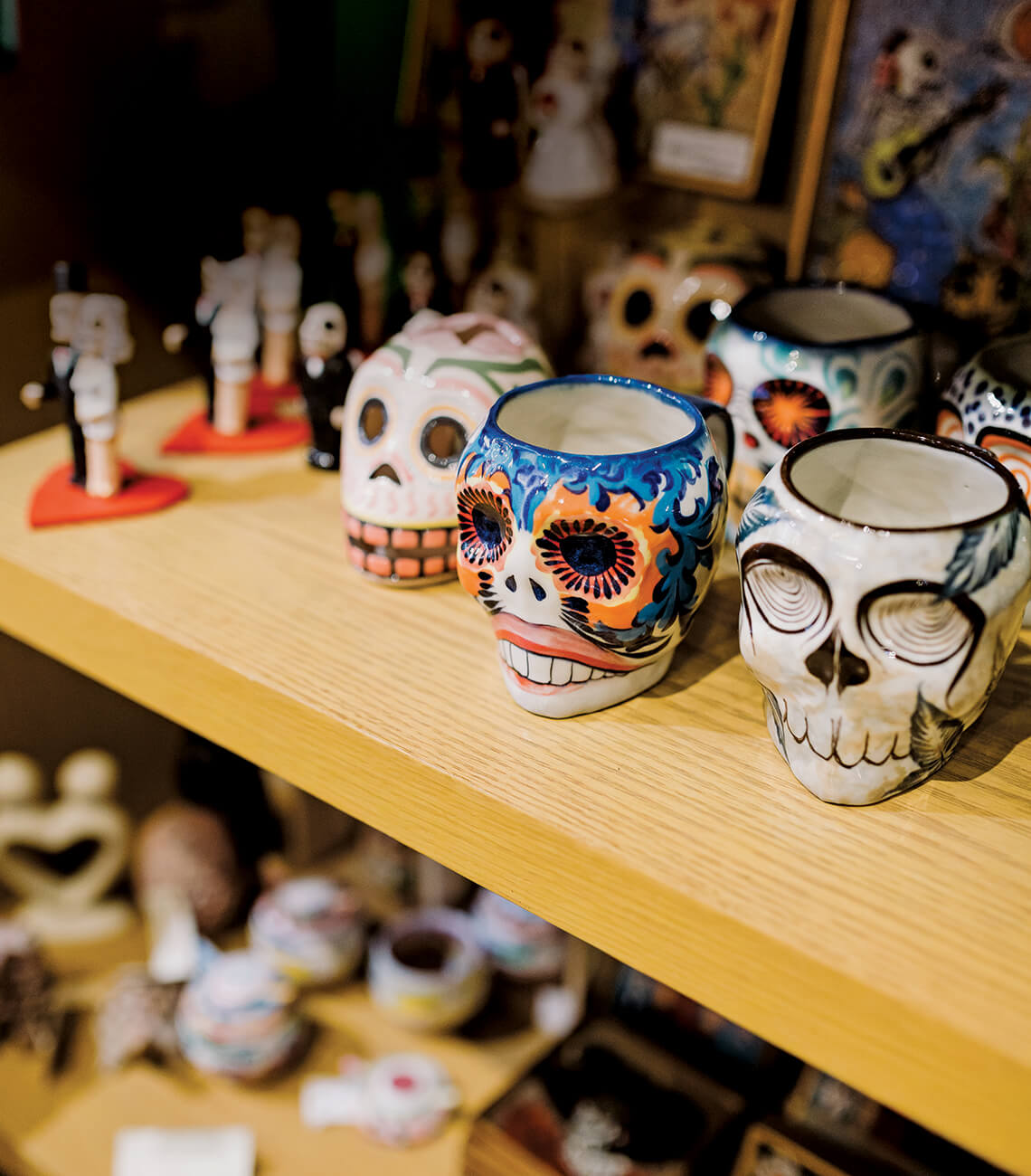 Pura Vida has evolved over the past 16 years: Originally, Hernandez sold coffee and hosted live music, and now, in the pandemic era, she offers face masks and emphasizes her ability to ship any order. “My hope for the future is to stay in business so I can keep finding new groups to work with and keep supporting them. There’s a face behind every product that we sell,” she says. “I want the store to help people embrace people who are different from themselves — different cultures, traditions, norms — so that it gets rid of fears in some people. I would hope that the store’s legacy is that it made people think bigger.” At Pura Vida in Charlotte’s NoDa arts district, a diverse but cohesive neighborhood, thinking bigger has become a tradition in the Queen City, and a goal for the entire state of North Carolina — and beyond.