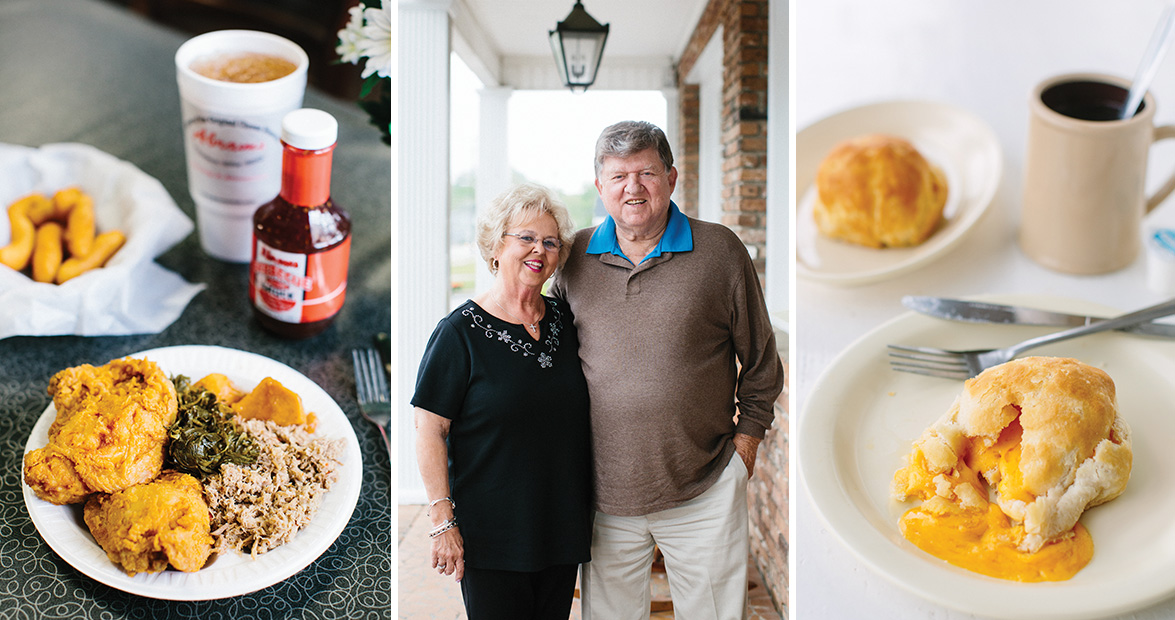 Instead of boasting about best-selling dishes, Gerald Abrams brags on people. When he talks about Abrams BBQ & Seafood, the small restaurant chain he started in Tarboro, he can’t help but mention all the family members and longtime employees at the heart of his business. “Best thing we got is great people working,” he says.

There’s Beth Abrams, his wife, who worked in the front of the restaurant for its first 10 years (they met in eighth grade and have been married for 52 years). There’s Jessica Prince, a manager who plans to hold her upcoming wedding reception in the restaurant’s banquet hall. There’s Wendy Brady, the formidable general manager for all six locations of the restaurant. There’s Margie Brookin, 78, who has worked in the kitchens since day one. And that doesn’t even include all the regular customers or the friends who wave hello from the ever-busy take-out window.

Established in 1974, the Abrams menu remains much the same as it did back then, centered on family-style dishes like barbecue, the crispiest fried chicken, ribs, and chicken pastry, as well as a bevy of traditional Southern sides like collards, cabbage, yams, and slaw. These dishes and more are the stars of the popular daily lunch buffet, which turns into a seafood buffet on Friday night and a traditional breakfast buffet on Saturday and Sunday mornings.

The cheese biscuit, a restaurant original based on Gerald’s mother’s recipe, was added in 1979 and is made with a two- to three-ounce piece of hoop cheese that’s shredded, formed into a ball, and wrapped in biscuit dough. Split the biscuit open with a fork, and the plate fills with a puddle of melted cheese. A few years later, a blueberry-filled biscuit topped with white icing was added to the menu, and the family held a contest to pick a name for the new addition. The winner? “Tutti Frutti,” proposed by a regular customer from Ahoskie.

Over the years, Gerald expanded his restaurant to include smaller locations, starting with one in nearby Pinetops in 1979. With each expansion, the Abramses try to capture the nuances of that part of North Carolina. At the two northern restaurants in Scotland Neck and Ahoskie, for example, the Brunswick stew contains more tomatoes because locals prefer “a bit more color,” Gerald says.

No matter how much the restaurant empire grows, it remains a family business. Gerald tells stories of his son Gerald Jr. — whom everyone calls Jerry — who’s been in the kitchens since he was 3 and used to make doughnuts out of the hush puppy batter. Gerald’s sister Brenda Canady has been helping run the line at the Pinetops location since retiring from her career as nutrition director for the Edgecombe County school system. And now there’s a generation of grandchildren, like 12-year-old Jarin, who just won the local 4-H cooking contest with the family’s barbecue recipe. He hopes to work as the official restaurant taste tester when he grows up.

Within a decade of opening the first restaurant, the Abramses added catering and traveling amusement rides to their list of offerings, feeding and entertaining anywhere from 50 to 50,000 people at a time. (Today, the catering operation is run by manager Shane Barber, whom, Gerald says, “you just have to meet.”) Abrams has fed regional organizations, local hospitals, and private companies as far away as Vermont and Florida. They even catered the christening ceremony for the USS Gerald R. Ford in 2008, attended by 30,000 people.

But they prefer to stay within the community, and aim to feed and give back to their neighbors whenever possible. The smaller locations are decorated with tall, shiny trophies from local organizations and high school sports teams sponsored by the Abrams family. The Tarboro location hosts a Back-to-School Bash with free book bags full of school supplies. The Pinetops location holds an annual Cheese Biscuit Festival, spearheaded by Barbara Hines, the Pinetops restaurant manager and yet another member of the extended Abrams restaurant family. About Barbara, Gerald can’t resist giving one more shout-out: “She always looks out for the kids,” he says, and makes sure there are plenty of cheese biscuits to go around.