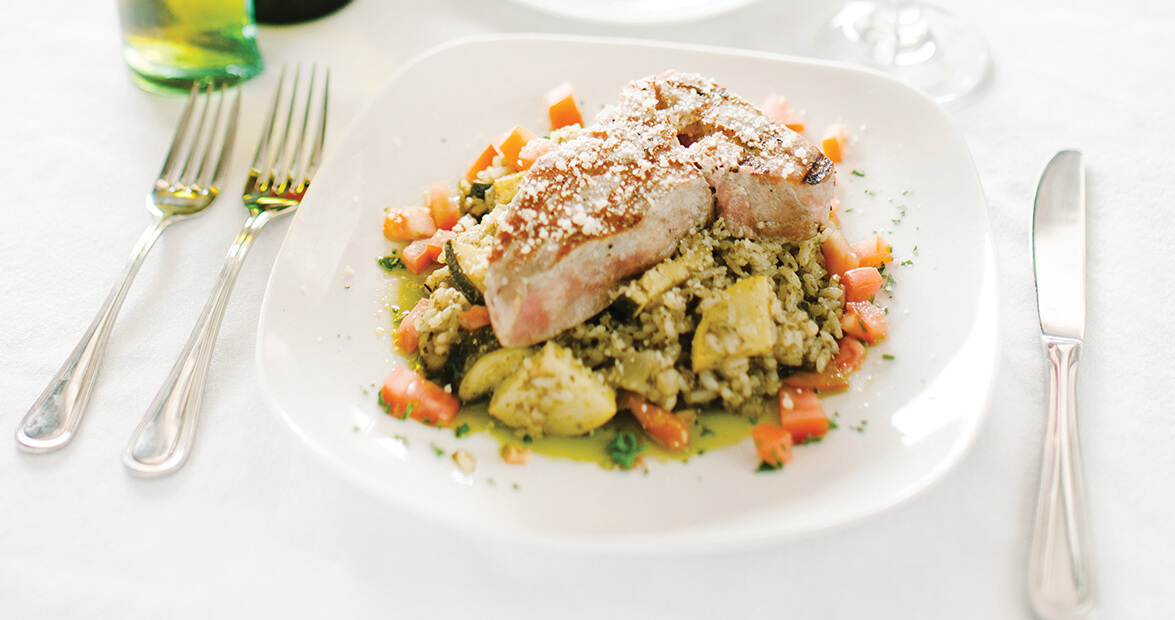 Alfredo DiPinto came south to play basketball in the 1980s. Decades later, he’s still in the game — now scoring points with customers at his polished Alfredo’s Ristorante Italiano in a refurbished landmark building in downtown Clinton.

“It’s unbelievable,” DiPinto says. “The town has been amazing. People were saying, ‘This is legit. The food is incredible.’ It keeps me reminded of how important it is to execute. I tell my staff, ‘We can’t rest. We’ve got to step it up a notch.’”

The first notch came after DiPinto — a financial planner for 28 years — gave up his side role as a volunteer assistant basketball coach at Clinton High School. He quickly found himself ill-suited for idle time outside his job, so he considered opening a restaurant as a hobby. The idea wasn’t entirely unnatural — DiPinto’s wife, Samantha, has run the Southern Style BBQ & Chicken restaurant on the south side of Clinton for nearly 30 years. Still, DiPinto himself had no cooking experience; he recalls how he once botched an egg sandwich he attempted to make for his wife.

What he did have, though, was a taste for food from his native Italy, and he wanted to bring those dishes to Clinton.

He opened Alfredo’s in 2010, renting downtown space in tight quarters from a landlord who wouldn’t permit him to sell wine. Operating just three nights a week, the restaurant took hold anyway, and within a few years DiPinto sought another notch: more room. His friend and fellow businessman Vince Burgess enlisted him in a deal that resulted in the sale of three commercial buildings in a week — a rare three-point play for downtown real estate in Clinton.

DiPinto ended up with a 12,000-square-foot, two-story, brick-and-stucco building that commands a corner of Main and Wall streets downtown, where a business district encircles the Sampson County Courthouse. Like so many other small towns, Clinton has seen businesses migrate out to its edges, where state highways and a bypass draw more traffic. In recent years, though, business owners have rediscovered downtown — the WCLN radio station operates from a storefront window on the courthouse circle, and new merchants include a bakery, a handful of gift shops, and a store that only stocks merchandise made in North Carolina.

The Alfredo’s building dates to the late 19th century and has housed everything from an insurance agency for sharecroppers, to a dance studio, to a thrift store, to classrooms for the county’s community college. Many Clinton residents remember it fondly as the longtime home of the Belk-Williams department store, one of the businesses that anchored downtown in its heyday.

Backed by a state grant that supports small-town revitalization, DiPinto had the building renovated from street to alley, basement to ceiling. It reopened as Alfredo’s in April 2016.

The downstairs features the main dining room, with hardwood floors, tables nestled in the former Belk display windows, a bar that doubles as a coffee shop in the mornings, and photos that pay homage to Clinton’s history of Farmer’s Day parades and a bustling downtown scene. Upstairs has the building’s original wood floors and exposed brick walls, along with space for private parties and a giant picture window looking out over the courthouse and circle traffic. DiPinto hired an artist to add an Italianate touch to the second floor: A re-creation of Michelangelo’s painting of the outstretched hands of God and Adam signifies the owner’s faith and symbolizes the building’s renaissance.

“I like to use the word providence,” DiPinto says. “I tell people it was a God thing. It really was amazing. This place — when I walked in, as raw as it was — just spoke to me in terms of its potential.”

Born in Cerignola, a southeastern Italian city near the Adriatic Sea, DiPinto was 3 years old when his family immigrated to South Bend, Indiana. He grew up playing basketball and earned a scholarship to Pembroke State University (now UNC Pembroke), where he majored in business and minored in French. His wife is a Bladen County native. They moved to Clinton in 1994.

Now, she runs one restaurant and he runs another. They often stay overnight in a cozy apartment above the Italian restaurant, and they share coffee on a small balcony that overlooks the courtyard of an Episcopal church.

During the dinner rush, the 6-foot-4 DiPinto, lithe and energetic at age 51, often bounds across the dining room to refill wine glasses, deliver bread, and chat with his staff and guests — ever the point guard, he pivots and zigs across the expanse of hardwood as if he’s driving through a zone defense.

“My sports background has served me in so many areas of my career,” he says. “This is a release. I work in a high-energy, high-stress job,” he adds, referring to his career in finance. “To me, the energy in a restaurant is therapeutic.”

And he’s learned some lessons about cooking. When he stops by a table to promote the evening’s desserts, he proudly announces, “I made a cheesecake. I made a key lime pie. I made an amaretto bread pudding.”

Word of the restaurant has spread. Because Clinton is the halfway point on a drive from Raleigh to Wilmington, out-of-towners often detour from the interstate and stop in for the shrimp and polenta, cannelloni, and brick-fired pizza.

“One of the most rewarding comments we hear — and it happens all the time — is, ‘We never would’ve thought we’d find a place like this in Clinton,’” he says. “It makes me say to myself, ‘We nailed that experience. The next time has to be the same. Don’t rest.’ This town can support a nice Italian restaurant that’s authentic.”