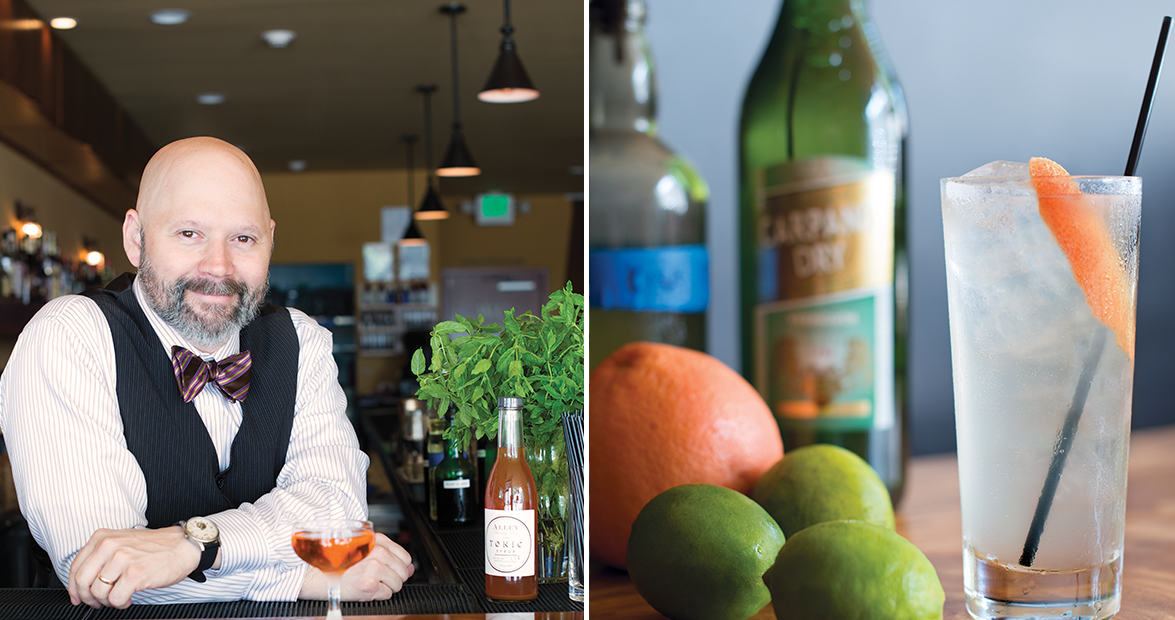 Durham is the South in a to-go box. Everything bright and beautiful and dark and dirty about this gritty and glorious ecosystem we call home is right here — our past, present, and future — everything from tobacco to slavery to the Civil War, to the demise of thriving industries, to the growth of our cities and the subsequent flight from them and our eventual return. All of it, everything, is here.

Fast-forward to right now and Alley Twenty-Six, downtown Durham’s neighborhood bar, where I’m drinking a Cape Fear Sbagliato, a ravishing concoction of dry vermouth, house-made kiwi syrup, white rum, lime, and soda, and all I can think is, I love the South.

See? After all the highs and lows, sometimes things turn out just fine.

But back to the drink. It deserves getting back to. Sbagliato is Italian for “messed up” or “mistaken,” but really it refers to a busy bartender mistakenly substituting one ingredient for another, creating something even better in the process. I don’t know what this drink was supposed to be, but I can say that a busy bartender is a blessing to us all.

Shannon Healy — owner of Alley Twenty-Six, a bar named after the alley it borders (yes, Durham names its alleys) — invented the Cape Fear Sbagliato. He invented most of the cocktails on his menu, or modified old favorites, eight or nine drinks that change seasonally. Tastes linger, buds open, surprising things happen on your palate. And I could write an ode to his house-made ingredients. Shannon’s drinks have more layers to them than a wedding cake.

Alley Twenty-Six is a distillation of Shannon’s career and personality. It’s not a pretentious place, but it does take itself seriously. Behind the long, blond-wood bar is a line of top-shelf spirits. The ice cubes measure one and one-quarter inch, ensuring gradual dilution. The bartenders wear black pants, white shirts, and black bow ties. “We dress up so you don’t have to,” Shannon says.

There’s a piano here, too. One night not long ago, saxophonist Branford Marsalis arrived with a pianist, and they performed. It wasn’t advertised. Just one of those magical things that happen now on Chapel Hill Street in Durham, where magical things haven’t happened in a long time. Five years ago, this stretch of street was a lonely and very dark place.

Shannon Healy is 44. He has a big laugh. He can be simultaneously warm and intense. He looks like a bartender; he could play one on TV. But he’s definitely not playing. He knows his business. He got his first restaurant job in 1985, and became a bartender in 1991. “He’s a self-made man,” says his wife, Andrea. His life was full of setbacks and wrong turns before the right one happened. Shannon sbagliato.

Shannon came to the Piedmont in the mid-’90s, the front man in a band. The musical career didn’t work out, but he became a fixture at Chapel Hill’s Crook’s Corner, where he worked for 12 years. This job was his turning point. “They care about food,” he says. “And drink.” Now, Shannon does, too. Alley Twenty-Six would not be here without Crook’s Corner. They’re family.

A bar can be a place, our place, a home away from home, a collection of disparate people with at least one shared interest. The art is to serve many but to make each of us think we’re the best of the customers — or not even customers, really, but friends, integral to the bar and what it means.
Alley Twenty-Six is like that.

When he found the space that would become his bar, Shannon called Andrea and said he’d found the spot. “It’s a dark place on a dark street,” he said. That’s what it was, but it’s not like that anymore. Once a month now, something new opens in the neighborhood, and although Shannon wasn’t the first here, he was an early adopter of this abandoned strip of city life.

When I meet people, I secretly judge them in this way: If I were part of a small group trying to survive in a postapocalyptic landscape, would I want you in my tribe? What could you bring to the table to help us thrive in this new world? Shannon is a visionary, a pioneer, and a man who knows how to make a cocktail. I’d want him with us, for sure.