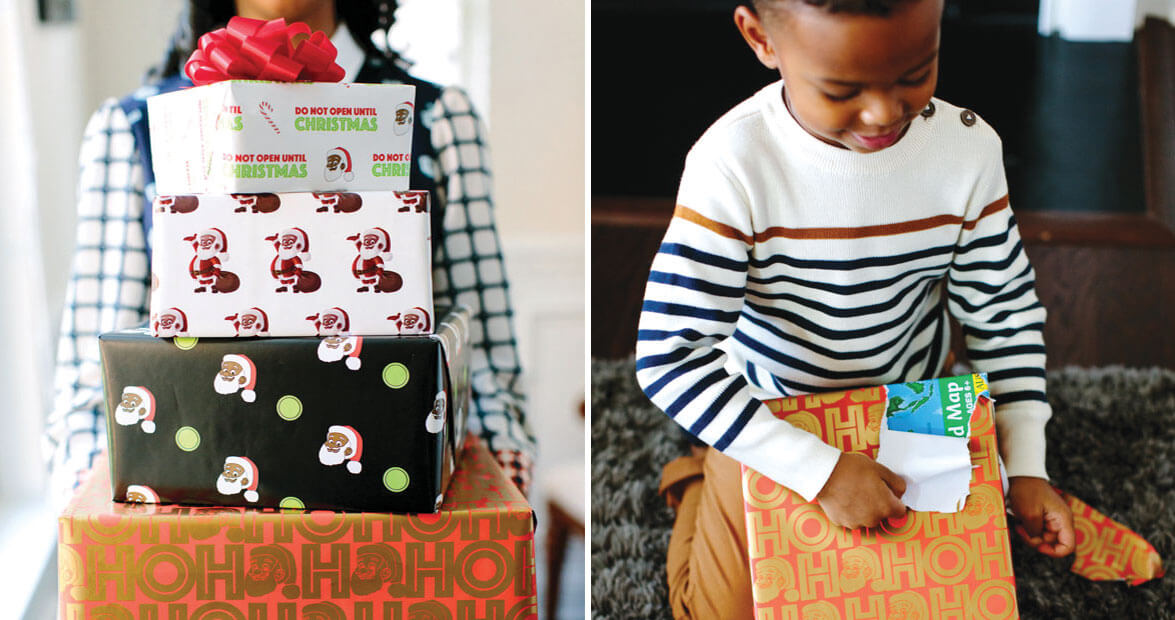 hen Jackie Rodgers thinks back on Christmases past, what she remembers most is the magic: The rush of crisp December air that followed her father as he walked through the door of her childhood home with a freshly cut tree. The blended scents of evergreen and cinnamon that drifted through the house as her mother made holiday gingerbread. The whiz of sharp scissors cutting a clean line through wrapping paper as she and her sister prepared presents. And she remembers watching her mom take a pencil to store-bought Christmas cards and carefully color in the faces of the white Santa Clauses until they miraculously transformed into black Santas. Jackie’s eyes would light up, and she would grin and giggle.

Shading in the white faces on greeting cards and wrapping paper has long been a holiday tradition in many families: Before the 1970s, it was nearly impossible to find greeting cards with black or brown faces on them in major department stores like Woolworth’s or Kress. In 1962, Hallmark introduced a limited number of products for African-American families, but it wasn’t until 1987, when Jackie was 4, that the company expanded its selection with the Mahogany line. And even those didn’t become a year-round offering until 1991.

As for wrapping paper: “You couldn’t find any,” Jackie says. Fast-forward to 2015: She still couldn’t find any. That fall, about a year after the birth of her first child, Elijah, Jackie began the search that would change her life. “I wanted to be intentional about the images that I show my children,” she says. “I wanted them to see diversity in all things.” Surely, she thought, by now she’d easily be able to find a black Santa on wrapping paper. But no. “I couldn’t find it in stores. I couldn’t find it online. I reached out to some of my sorority friends in other major cities, and …” Her voice trails off. She shakes her head. “Nothing. It simply didn’t exist.”

Then it occurred to her: Why not make her own? She found an illustrator to bring her vision of a black Santa to life, and she named him Clarence after her father. Then, in October 2016, she launched Greentop Gifts, which she named for the Hillsborough restaurant that her grandfather ran back in the ’40s and ’50s. And now, Clarence Claus — a jolly old St. Nick with a fluffy white beard, warm smile, bright eyes, and rich brown skin — appears on six different styles of wrapping paper.

Jackie and Shaun Rodgers are mindful of the images that their kids — Cameron, 1, and Eli, 5 — are exposed to, not just on wrapping paper, but also birthday cards, books, and TV. “It’s important for them to see themselves in a lot of things,” Jackie says. photograph by Anagram Photo

The company was such a godsend for many African-American families that when Jackie posted photos of Clarence on social media, people immediately reposted them. News of Clarence eventually made its way to Oprah. In the December 2017 issue of O, The Oprah Magazine, Gayle King, the CBS This Morning anchor, is shown wearing a Clarence Claus sweatshirt and surrounded by gifts wrapped in Clarence Claus paper. “When we head to Oprah’s for Christmas,” King wrote, “I know what my favorite son’s and favorite daughter’s presents will be wrapped in!” Jackie chuckles at her good fortune. “I don’t know Oprah and Gayle,” she says, “but Clarence has already been to Oprah’s home in Hawaii.”

The morning sun casts a warm light on the dining room table inside the Apex home that Jackie shares with her husband, Shaun; their son, Eli, who’s now 5; and 1-year-old daughter, Cameron. Today, things look mighty Christmasy. In the center of the table is a pile of Greentop gear: Clarence smiles from the front of a tiny onesie, his face surrounded by the words “My 1st Christmas,” and there he is again, on gift bags, labels, coffee mugs, socks, sweatshirts, hoodies, ball caps, and rolls of wrapping paper. Jackie rubs a corner of the paper between her index finger and thumb, and says, “I just love the texture of good paper.”

Jackie’s always been a holiday nerd, especially when it comes to Christmas. “I’m a December baby,” she says. “I love all things Christmas. I love all things celebration. That’s my jam!” Throughout the year, she spends her leisure time browsing bookstores and gift shops for cards and paper. “I’m pretty much a stationery snob,” she says, laughing. “I like to pick it up and feel it and say to myself, ‘Oooh, this is such nice paper!’” She knew exactly what she wanted for her Clarence Claus line. “I wanted it to be thick. I wanted it to fold and crease extremely well,” she says. “I didn’t want the paper to be so thin that you could see through it.”

As she talks, Jackie’s mother quietly fusses about the kitchen, wiping counters and putting things away in the refrigerator. Family is important to Jackie. When she first launched Greentop, her mom, sister, and aunt would come to the house and prepare boxes for shipping. Jackie and Shaun would help out later, when they got home from work. “The first year, we stayed up until 11 or 12, packing until we were cross-eyed,” Jackie remembers.

The Rodgerses have since hired a fulfillment company to handle the orders, but Greentop remains a small mom-and-pop enterprise that the couple operates on the side. Jackie, who studied business at Clark Atlanta University, still works full-time in consumer packaged goods, while Shaun, who has a background in finance, works for a Raleigh tech firm. When Jackie initially told Shaun that she wanted to start an online business selling wrapping paper, he was supportive but wary, and suggested that she research the market. Jackie compiled industry reports on wrapping paper, looked at how many African-Americans buy it, and compared that with how many people overall buy it. When she was certain that there was a market for paper with black Santas, she made a few calls to manufacturers to learn about the printing process. Then she approached Shaun again. He asked one more time: “Are you sure you can’t buy it anywhere?”

The Santa Claus we know today has evolved over centuries. St. Nicholas is believed to have been born in 280 AD in Lycia, nicknamed Sinterklaas by the Dutch, and brought to America in the 1770s. Here, he was mythologized by Washington Irving in an 1809 book, which had St. Nick “riding over the tops of the trees, in that self-same wagon wherein he brings his yearly presents to children.” Later, back in England in 1843, Charles Dickens fine-tuned the idea of Santa Claus in A Christmas Carol, though his version was named the Ghost of Christmas Present and wore a green robe. It wasn’t until the 1860s, when the great German-American illustrator Thomas Nast depicted Santa in a red suit, that our image of the rosy-cheeked, bearded gent was crystallized in the collective imagination.

To create a vision of Santa for this millennium, Jackie turned to the Internet and landed on a page of illustrations by an artist based in Ghana — a long way from the Triangle suburbs. She told him what she wanted: Clarence should have a look that would engage both children and adults; he needed to radiate joy. “The most important part would be the eyes,” Jackie says. “Because when you see images of Santa, there’s that unstated magic about him: that wink, that smile.”

In other words, the joyful essence of Santa never changes, even as he continues to evolve. Jackie reaches across the table and gently picks up a hoodie bearing Clarence’s image. “The nice thing we’ve found is that, in addition to people who have children of color, there’s a lot of people who are white or Latino, and they want to buy these items for their kids, too, to show diversity — to show that Santa can be all different colors.” His fluffy white beard, warm smile, bright eyes, and rich brown skin make Jackie’s eyes light up, and she grins and giggles: “He’s just perfect.”