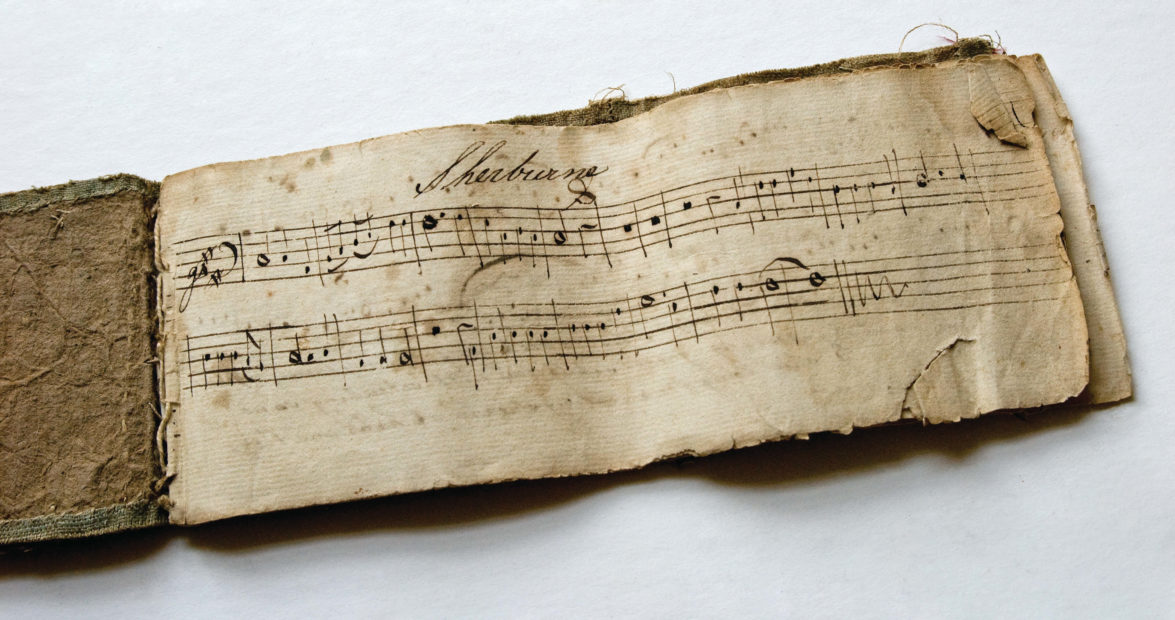 My mother learned to appreciate music from her father. At the end of a long day, after all the chores were done, the family would gather around the hearth in their mountain farmhouse, and Grandpa would lead them in singing their favorite hymns. Had he lived in the early 1800s, he might have used a tunebook instead of the well-worn hymnal that’s a family treasure today.

Fairly common in the 19th century, tunebooks featured handwritten lyrics and melodies of folk songs and hymns brought to America by European settlers. Some tunebooks contained musical notations for only one tune that could be used for several different songs, while others listed music and lyrics for several songs. A leader would sing one line of a song from the book, and a group of singers would repeat it, followed by the next line, and the next, until the whole song had been sung.

This tunebook includes handwritten lyrics and musical notations for 19 songs, such as “Through Faith I am Determined to Conquer.” Considered rare because of its excellent condition, the tunebook bears the inscription: “Patsey Durrit [wife of] Fleming Bates 12th May 1803.”

Banner Elk native Mary Guignard Elder remembers seeing the tunebook for the first time as a teenager. “I was attracted to it because it looked old-fashioned,” she says. “The tunebook was probably passed down in our family from my grandmother, who was a Banner.” The story goes that one of the Banners married a Durrit.

Where is it now?

The 1803 tunebook, along with a CD containing two of its songs, can be found at the Banner House Museum, open from June until October. The museum offers an interpretation of Banner Elk life in the 1800s, with authentic period furniture, kitchen and farm tools, and photographs from local families.