When Janice Rose Poniros was a little girl, she would visit her aunts in Hillsborough, where the highlight of her stay was a trip to the Colonial Inn for family-style meals of fried chicken, mashed potatoes, and green beans. On a recent Sunday afternoon, she returned to the inn, which reopened in November 2020 following a $2.9 million restoration. Given Poniros’s vivid memories of the meals she enjoyed as a child, the new iteration had to be pretty good to impress her. So how does she rate its reimagining of Southern culinary classics? “The best fried chicken I’ve had in my entire life,” she says. 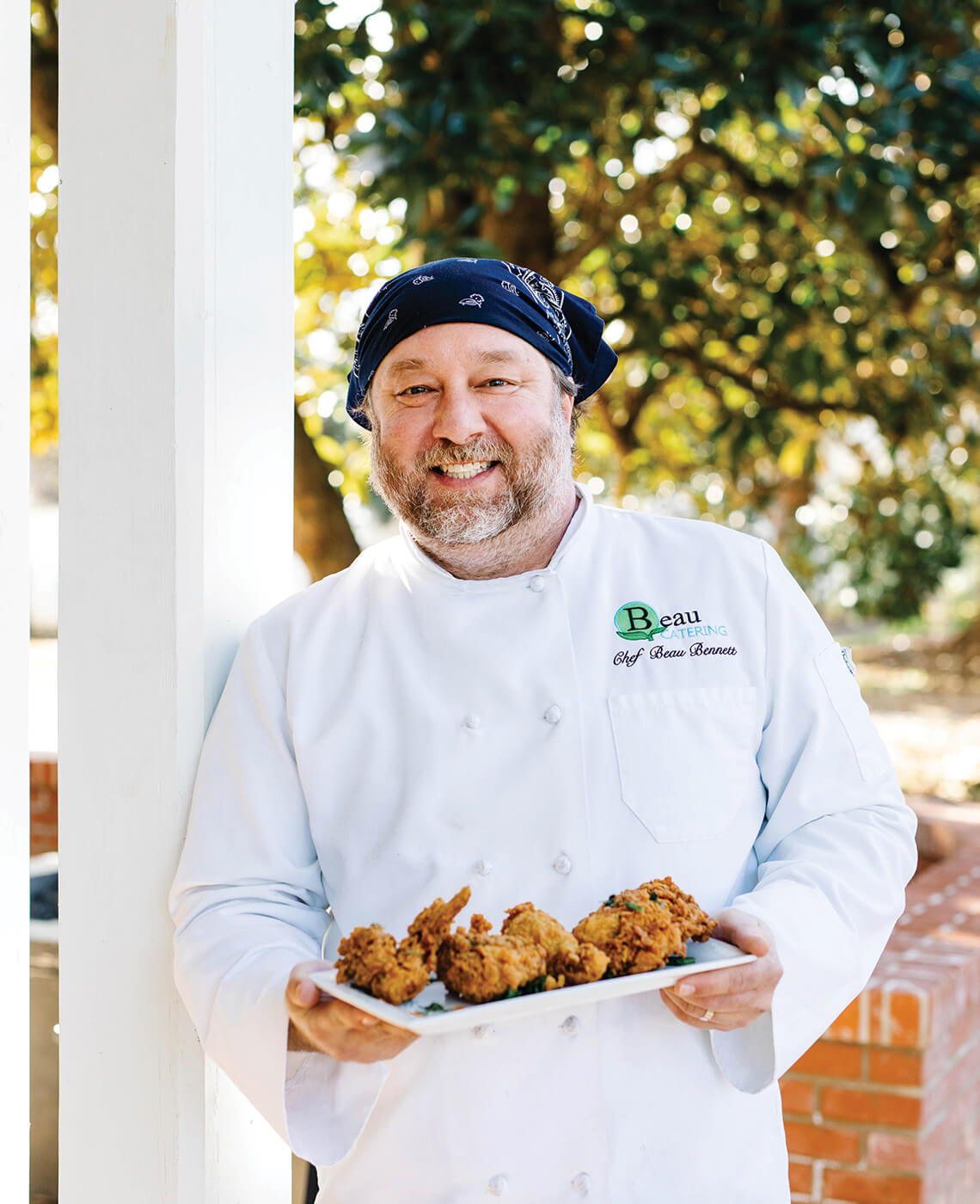 That’s music to Beau Bennett’s ears. He’s a Hillsborough resident and the owner of Beau Catering, the company tapped to provide the Colonial Inn’s guests with elevated takes on classic Southern fare. Growing up near the Pamlico River in Little Washington, Bennett learned at an early age how to catch, clean, and cook fish. He began his professional career working alongside the legendary Chef Bill Smith at Crook’s Corner in Chapel Hill, followed by stints at 411 West, Pyewacket Restaurant, and Acme Food & Beverage Company, where he served as kitchen manager for two years. Bennett launched his catering company in 2009 and prides himself on sourcing ingredients locally and regionally, an ethos that appealed to the inn’s new owners.

“When we were talking about the menu, we knew we wanted to honor the Colonial Inn’s history while bringing it into the modern age,” Bennett says. “We’re so lucky to have an abundance of local farms [so that we] can offer food that is always fresh and in season.” Each Sunday’s brunch features a choice of a main course — in addition to fried chicken, there’s shrimp and grits and a vegan sweet potato hash — and bottomless sides of mini cinnamon rolls and quiches, bacon, roasted red potatoes, and fruit.

Bennett’s twist on time-honored Southern cooking is one of many ways that the inn’s new owners are celebrating its legacy in this small Triangle town. Built in 1838 by Isaiah Spencer, the two-story building initially provided food and lodging to travelers making their way to the Orange County seat for business. Its original name was the Orange Hotel, but locals referred to it as Spencer’s Tavern.

The business switched owners several times before it was purchased in 1856 by three brothers, Alfred, Henry, and Cave Stroud. It was under their ownership that the inn faced the first of several close encounters with destruction. 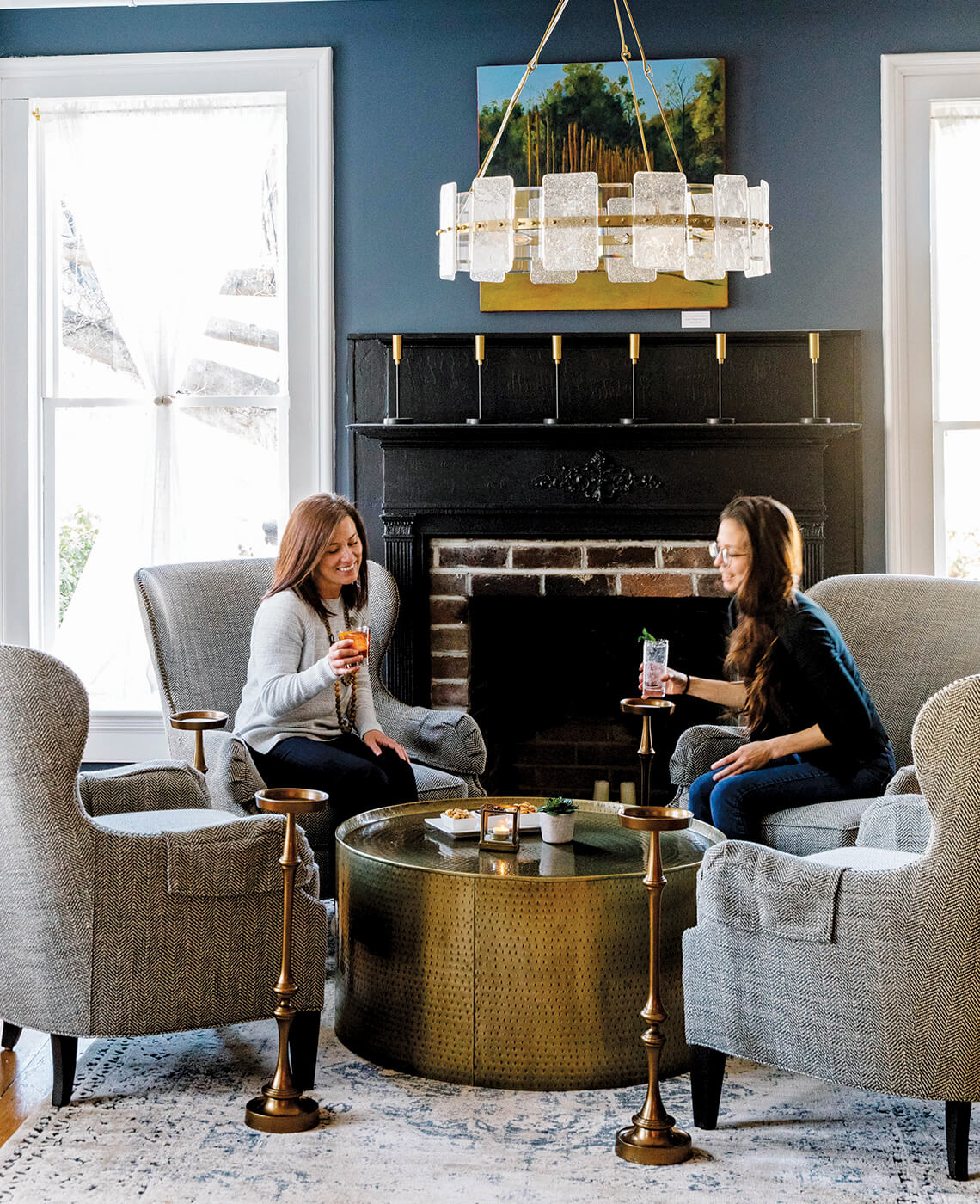 The design of the Colonial Inn’s bar is a mix of classic and contemporary. photograph by Anagram Photo

During the last days of the Civil War, Union Gen. William T. Sherman’s troops descended on Hillsborough and began looting the inn. Desperate to protect her family and home, Henry Stroud’s wife, Sarah, grabbed her husband’s Masonic apron and began waving it from a second-story porch. Fortuitously, one of the Union officers was also a member of the Masons, a fraternity of stone craftsmen dating back to the 14th century. Recognizing that he shared with his Southern brethren a strong and proud affiliation that predated America’s founding, the Union officer called a halt to the pillaging.

Through the decades that followed, the inn’s fortunes waxed and waned as ownership continued to change hands. Dubbed the Colonial Inn in the 1920s, the place became a popular destination for visitors near and far. Couples celebrated marriages and anniversaries at the hotel; families and college students found comfort and community sitting elbow to elbow with other diners. A menu from 1949 lists jellied consommé and fruit cocktail as starters, with entrées ranging from Southern classics (fried chicken, baked ham, Salisbury steak) to veal cutlets and softshell crab.

In 2001, the Colonial Inn closed for business; a few years later, it was sold at auction. Hopes were high that the new owner would restore the fading beauty to her original splendor. Instead, nearly two decades passed, and the building fell into decline, with at least one blaze sparked by someone burning trash in a fireplace. That prompted a protracted legal battle between the Town of Hillsborough and the Colonial Inn’s then-owner to prevent the demolition of the site, which is listed on the National Register of Historic Places.

During the time when the building was dark and deserted, Elise Tyler would walk by and marvel at its beauty and rich heritage. A native of Massachusetts, Tyler had grown up in a 300-year-old home, and she understood the challenges and potential for the inn’s revival. Through her work with a commercial construction company, she got to know the owners of a structural engineering firm that specializes in the restoration of historic properties. Days after the inn went back on the market in mid-2017, Tyler contacted Justin Fejfar, who was looking for his next project. He and Joe Goatcher formed Allied DevCorp and closed on the property in January 2018. They got to work right away, soon hiring Tyler and her husband, Rutland, as managers. Elise began posting construction updates and historical facts on a Colonial Inn Facebook page, prompting an outpouring of memories and well-wishes from more than 4,000 followers.

She also contacted Roy Underhill, a master woodworker who had overseen the restoration of Colonial Williamsburg, among other projects. As they explored the mysteries revealed by stripping walls down to the studs, they discovered sturdy oak beams still bearing ax marks, mud daubing between logs, and hand-forged nails. One of those wrought-iron nails is now on display in the inn’s lobby alongside a pair of unearthed horseshoes. 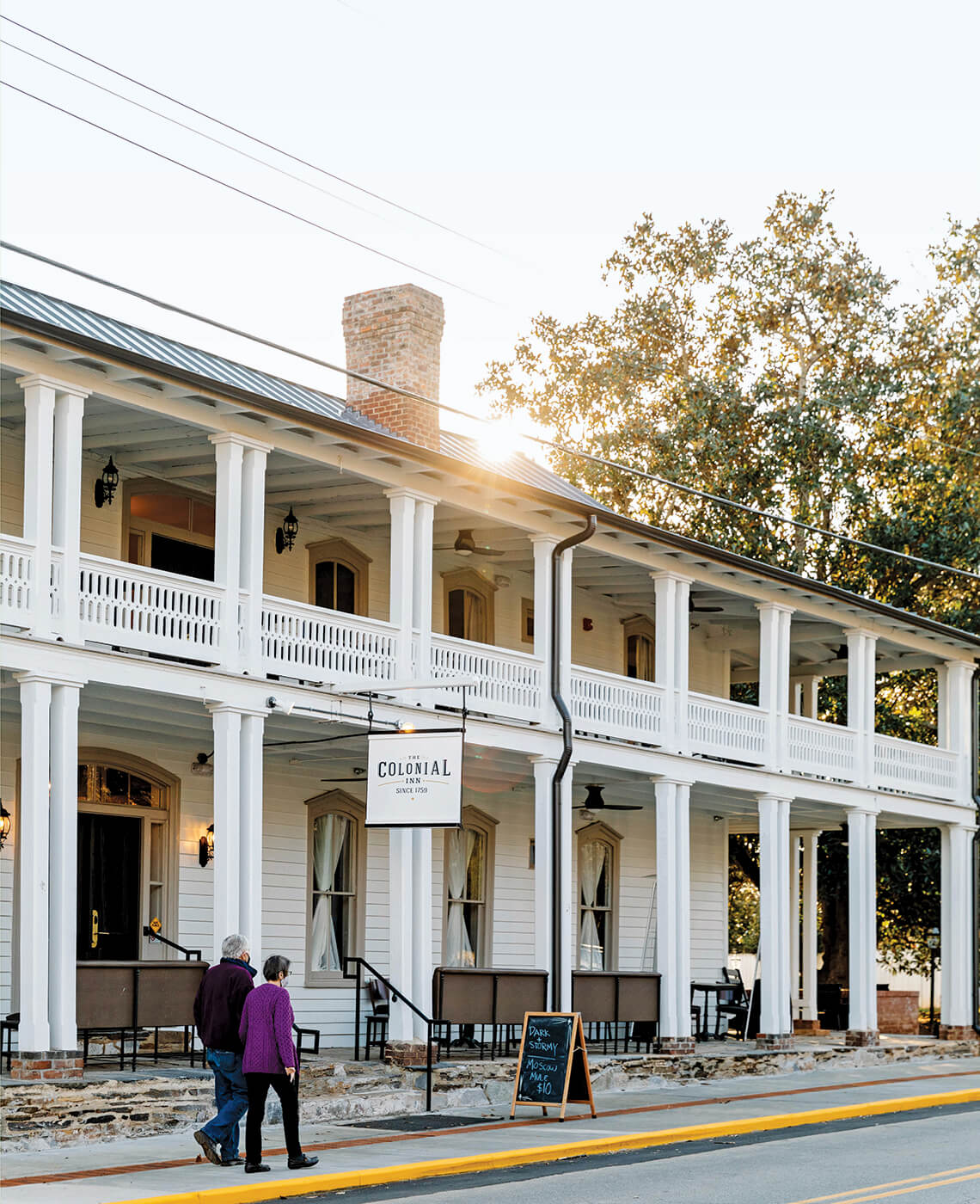 The historic Colonial Inn on West King Street in Hillsborough is back in business with a new coat of paint. photograph by Anagram Photo

As the 28-room boutique hotel began taking shape again, the Tylers and their partners sought out catering companies that could provide authentic yet elegant culinary fare that would appeal to old-timers and newcomers alike. “From the start, we knew we wanted to support local businesses and artisans,” Tyler says. “Beau Catering has been in Hillsborough for 10 years offering incredible food and service, and he was excited to work with us to create the menu.”

Bennett spent time perfecting his recipe for fried chicken, a process that includes brining, a buttermilk wash, and dredging in a secret spicy flour mixture. Because of Covid-19 restrictions, socially distanced Sunday brunch seating is currently offered every other week by reservation, with plans to expand hours and options down the road.

As the sold-out brunch crowd winds down on this Sunday afternoon, one diner, Billie Boyd, reflects on the Colonial Inn’s comeback. “My grandparents, Murphy and Edna Boyd, used to bring us here all the time,” she says. “The Colonial Inn was a family tradition. It was where we celebrated birthdays and had Sunday dinner.”

When her friends Lib and Carter Bennett moved to Durham’s Croasdaile Village retirement community, Boyd counted the days until the inn’s reopening. She couldn’t wait to introduce the couple to the history of this area, and to the community that’s gathered at the Colonial Inn for more than 180 years.