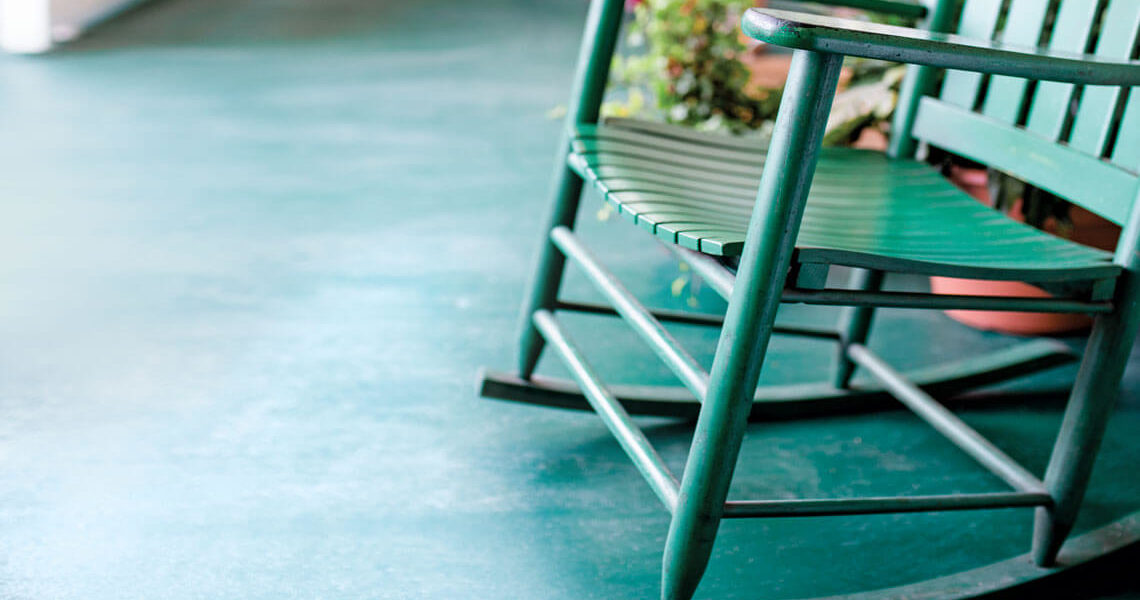 I first learned that a rocking chair has a soul when I went looking for one. It was not long after I bought my home in Raleigh. The house had a small front porch, just big enough for a chair and a little table. A big-box store provided what you’d call a Carolina slat rocker: wood, with square rather than round spindles, and wooden slats for the seat and back. It had nice, wide armrests that turned out to be almost, but not quite, big enough to comfortably support a beverage — similar to the ones you see on the front porches of chain restaurants. I brought it home, primed it, painted it, and waited for it to dry. On the first pleasantly warm evening, I went out to the porch, drink in hand, and settled in.

And the rocker practically flung me back out. I happened to save the gin and tonic, but you may call that foreshadowing. The chair was poorly balanced, leaning forward just a bit too much. To sit comfortably, you had to push back a little with your legs, which meant that instead of relaxation, the rocker caused tension. Yes, you could place your drink on its armrest, but the minute you tried to turn a page or adjust a cushion or — God forbid — rock, it was goodbye drink. I don’t give up easily, though. I sat in that chair and spilled stuff. I tried to read, my calves getting tired as I hunched over my book like someone in a Rembrandt painting. As God is my witness, I played a banjo in that rocking chair! I did what I could. But the chair defeated me.

Still, that rocker was lovely to look at, painted a forest green to match the shutters. It sat on my porch aspirationally for at least five years, maybe 10. But as rain seeped in, the chair became wobbly. With so little reward, I was unwilling to maintain it, and I awoke one morning, finally, to pieces of a chair. The rocker and I parted ways.

This was not my first rocking chair fail. I spent much of my childhood facing down a rocker that sat in the den of my family’s brick house in suburban Cleveland. It had a broken back spindle that bedeviled me. Attached to a cracked socket at the top, the spindle would usually sproing away from the dowel that stuck down from the cresting rail. When the spindle wasn’t wobbling back and forth, it was poorly glued — or duct-taped, or both — to the dowel, lending no support, but at least rendering its malfunctioning a little less obvious.

That broken spindle represented a moment, I was told many times, from my toddler-hood. My mother, sitting in the chair, had grabbed me for one of those rocking-chair hugs. I wriggled and resisted, refusing to cooperate. But for my mom, it was hug or bust, so bust it was, and she grappled with me until the spindle broke. My mom blamed toddler me; I cast no blame, but from then on, I avoided that chair. Looking back on it now, I think the poor rocker never had a chance. Once you’re paying attention to it — once you’re thinking about how it works, or even whether it’s working — a rocking chair’s heart is broken. The entire experience should be unconscious. You should be rocking in a rocking chair without even knowing it. Just as a rocking chair should not throw you out, nobody should wrestle you into a rocking chair.

One thing rocking chairs are not, though, is old. Evidently invented in the Northeastern United States, the first rocking chair was most likely just a regular chair with runners — the curved parts — nailed to the legs. Manasseh Cutler, a preacher who was working to settle the Northwest Territory, visited Ben Franklin in Philadelphia in 1787, and in his journal, Cutler remarked on Franklin showing him his “great armed chair, with rockers.” Probably the first known mention of the design came a little earlier, in 1774, in a receipt written by a Philadelphia furniture maker for “bottoming a rocking chair,” which means that even by then, somebody’s rocking chair was old enough to need a new seat.

Rocking appears to have upset British writer Harriet Martineau, who, in her 1838 Retrospect of Western Travel, described upstate New York, where “the disagreeable practice of rocking in the chair is seen in its excess. In the inn parlour are three or four rocking chairs, in which sit ladies who are vibrating in different directions, and at various velocities, so as to try the head of a stranger almost as severely as the tobacco chewer his stomach. How this lazy and ungraceful indulgence ever became general, I cannot imagine; but the nation seems so wedded to it, that I see little chance of its being forsaken.”

Over time, the rocker has become as associated with the South as sweet tea and the front porch.

That’s “the nation,” mind you, but just the same, there are two surprising things here: First, the rocking chair is much newer than one would expect. Although a rocking cradle was found in the ruins left by the eruption of Mount Vesuvius, it took humankind almost two millennia to get from the cradle to the chair — a bit dispiriting. Second, and perhaps more dispiriting for Southerners, is that the rocker is yet another thing that we think of as ours but that actually came from … well, not from around here. Yet we may draw comfort from what snooty British travelers looking down their noses called “this lazy and ungraceful indulgence”: Perhaps as other parts of the country began to perceive themselves as more sophisticated than the South, they, too, started to look down on the practice of rocking. But the South has always been proud of its indulgences; we have been rocking for the duration.

Over time, the rocker has become as associated with the South as sweet tea and the front porch. Tennessee Ernie Ford is credited with the old chestnut “nervous as a long-tailed cat in a room full of rocking chairs,” although I and others deeply believe that we have heard this expression uttered by Sheriff Taylor, even if, despite assiduous research, no Mayberry-based evidence has come to light. The famous chair that soothed President Kennedy’s back was not merely a Southern rocker, but a Carolina rocker: a cane-back model made by the P&P Chair Company in Asheboro. And what, after all, does Atticus Finch race into Miss Maudie’s burning house to salvage? Her rocking chair, of course.

That’s all history, though. Let’s get back to rocking. Because rocking is what it’s all about. There are millions of comfortable chairs, but a rocker has that other level: It quite literally moves you. I’ve gone through many rockers in my life, from the one that I broke while resisting my mom to the one that rotted on my porch to the ones that my wife and I inherited from our grandmothers, which turned out to be not quite right. I’ve thought about it, and, for me, what a rocker needs is a combination of the things that my failed rocker relationships lacked. 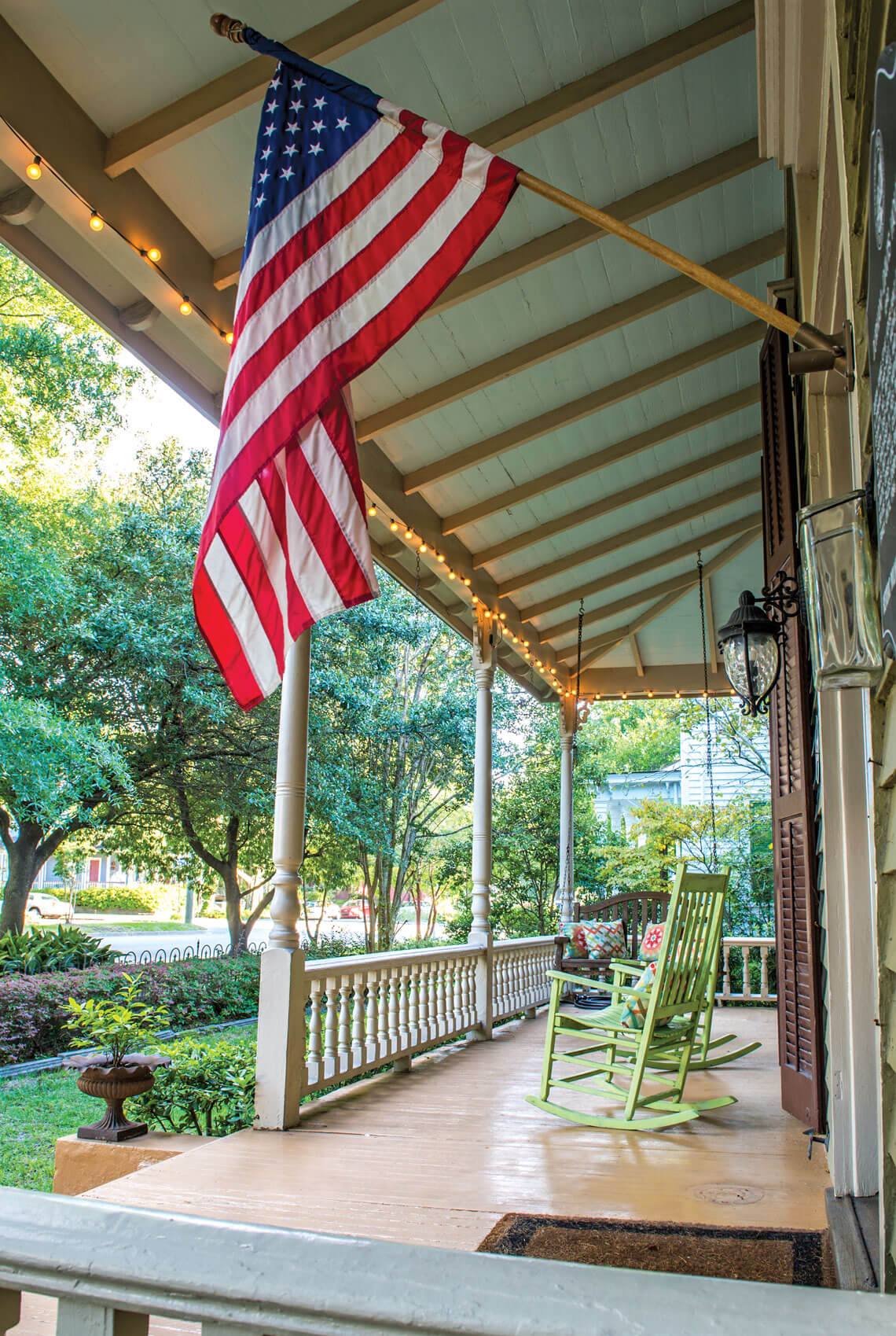 The rocking chairs on the front porch of the Durham-Davis House in Wilmington are like time machines, gently transporting sitters back to the late 1800s, when this Queen Anne-style Victorian was built. photograph by Jeff Janowski

First, as I learned from my porch rocker, it needs to comfortably rock. A good rocker should lean backward on its own. It should beckon you to, as it were, sit in its lap. When you sit, it should embrace you, not pitch you back out. And second, it should comfortably hold you — and, all right, maybe also an infant or a compliant toddler — but usually only you. If you want motion while you canoodle, sit on a glider or a porch swing. A rocker is more of a driver’s seat. There’s no space for a passenger, so don’t try to cram one in. Something will break.

And that kind of tension is what the rocking chair is meant to avoid. Sitting down to make a shopping list? You have a kitchen table for that. Need to discuss things with the kids or your spouse? There’s the living room couch. But sitting down just to sit? That’s what your rocking chair is for. We think of retirees rocking on porches because relaxation, lack of obligation, is what a rocker represents. It moves back and forth, but it doesn’t go anywhere. You can toss in every Southern cliché you like — tea, liquor, shade, seersucker — and a rocker improves each one. A rocking chair is the paprika of furniture: It intensifies.

The rocker must rock not so much with you as for you; you should be rocking without even knowing that you’re rocking. If someone complains about a noise you’re making as you sway back and forth, unaware that you’re rocking? That’s a good sign. If you’re humming and you didn’t notice? Another positive. Researchers have found that rockers induce the kind of brainwaves you experience just before sleep. It may have taken us two millennia to figure it out, but the rocker does to you what the cradle does to your baby. Not for nothing did my mom want to rock me when I was a toddler. Who is ever done with rocking their children? But, as my mom learned, it’s also important to make sure those children still want to be rocked. They may have reached the age of wanting to rock on their own.

After our misses with our inherited rocking chairs, my wife now sets up shop in a rocker that came from an abandoned house, reupholstered and loitering in a corner of our dining room. She reads there, listens to podcasts, and is slowly, gently, digging a hole in the drywall with one of the runners. I pointed it out to her once, and she looked up.