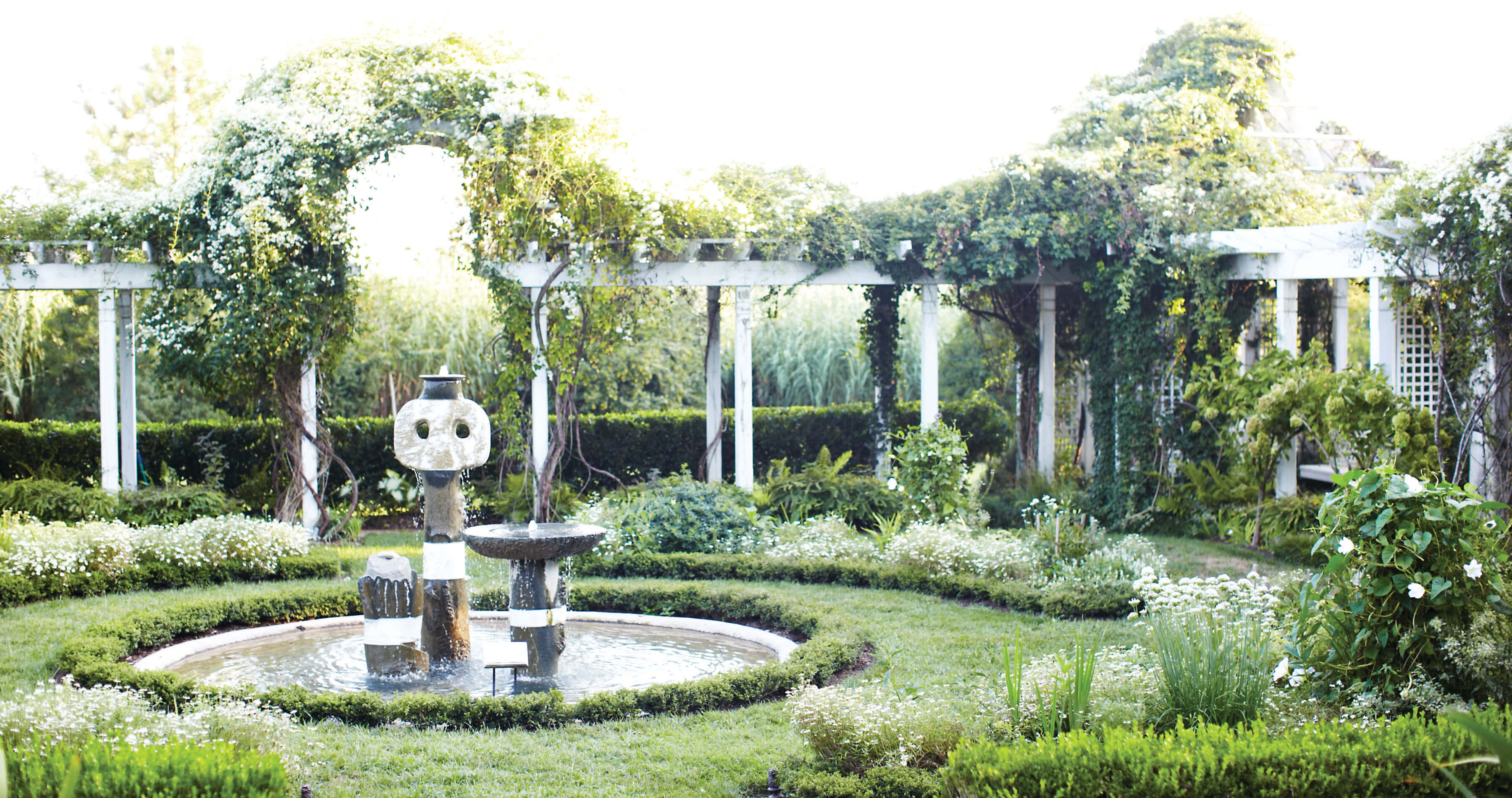 EDITOR’S NOTE: This story was originally published in the January 2010 issue.

I stumble to the kitchen for breakfast. We’re out of tea and milk and just about everything else, and my son is getting a little bit antsy. “Let’s go to Fearrington,” my wife says.

My two-year-old’s eyes widen as he shouts, “Fearrington cows!”

He loves Fearrington Village because of the black-and-white Belted Galloways that graze along the main entrance. But my wife and I love Fearrington because it’s a unique getaway — a European-style hamlet set among forests and farms — right around the corner from our house in Chatham County. Beyond the metal silo, old milking barn, and fenced-in pastures, several specialty shops, a bookstore, restaurants, walking trails, and finely manicured gardens spread out under large oak trees.

We say hello to the belted cows and head to the Belted Goat cafe for some flaky scones and black tea. Then we make our way around a pair of lakes in Fearrington’s 17-acre Camden Park before resting beneath a willow tree. Our leisurely day has begun as if we were on vacation.

That’s what Fearrington feels like — a vacation, a close-to-home getaway. So much so that my wife and I decide to return for a stay at the Fearrington House Country Inn even though we live just down the road.

The day of our retreat finally arrives. We check into an immaculate room and then head to dinner at the Fearrington House restaurant. Fully sated, we settle onto a bench in an intimate courtyard at dusk, sipping tea until the cows come home, literally. We look at each other, smile, and I say, “So this is what a Fearrington vacation is really all about.”

Fearrington Village, eight miles south of Chapel Hill and seven miles north of Pittsboro, is set on 1,400 acres, much of which had been a farm for two centuries until Jesse and Willa Fearrington sold it to Chapel Hill developer R.B. Fitch and his wife, Jenny, in 1974. Fitch had previously created two smaller residential developments in Chatham County but wanted to try something different at Fearrington.

“Jenny and I, we were both products of small towns,” Fitch says. “And we always liked the idea of being able to walk everywhere.”

As they started building homes, they began developing shops and restaurants in the town center, all the while incorporating the old farm aesthetic — the old silo, white wooden fences, green pastures, Jasper the pony, and the original barn that the Fitches eventually refurbished to accommodate weddings.

In 1986, inspired by fond memories of their travels to Europe, the Fitches added the inn. “No two inns were alike,” he says. “When we’d visit, we always knew that we’d be well-received, the bed would be comfortable, there’d be a nice bath, good food, and the whole experience would be great.”

It was Jenny’s idea to open the inn — 13 rooms at first — and surround it with lush greenery, including a special white garden, which was dedicated to Jenny after she passed away in 1995. “Jenny was into cooking and decorating, flowers and gardens, all the beautiful, soft things of life,” Fitch says. “I used to call her a nice Martha Stewart. And it was Jenny who got me into the restaurant business.”

The five-star Fearrington House restaurant is in the old Fearrington farmhouse, shaded by large oaks and partially visible from U.S. Highway 15-501. Just inside the front door, there’s a bar and a lounge for afternoon tea. Several dining areas wrap around a large kitchen, where Chef Colin Bedford uses the best local produce and herbs, including some from Fearrington’s own greenhouse and gardens — just two of the earth-friendly approaches that helped the restaurant become the Triangle region’s first Certified Green Restaurant, according to the Green Restaurant Association.

At dinner, the first thing I noticed was the perfect service. I mean, perfect. Second, the food; it looked so good on the plate that I almost felt bad about eating it. Almost.

Like many gourmet restaurants, Fearrington is known for its rich and flavorful cuisine. But the menu featured several lighter options, which my pregnant wife wholeheartedly welcomed. I was particularly impressed with the lobster sausage and risotto and handmade tortellini, a treat so delectable that it would’ve made my Italian mother blush. For dessert, our waiter, Adam, did a nice trick of pouring the melted chocolate down upon the soufflé from a significant height. We had to applaud.

After our culinary extravaganza, we knew exactly why OpenTable listed The Fearrington House as one of the top 50 restaurants in the United States in 2009. If you want to learn from Chef Bedford, Fearrington offers vacation packages throughout 2010 that include culinary classes. 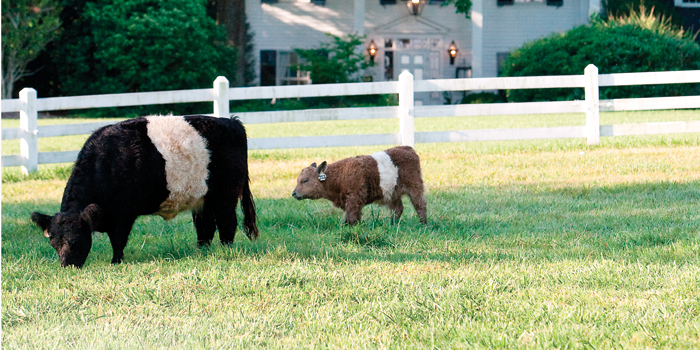 Back at the inn, our second-story suite — one of the original 13 — drew the perfect contrast between elegant and cozy, featuring European antiques, original art, and the most comfortable couches and chairs. The newer rooms, some built just two years ago, have a slightly more modern feel. But every one of the inn’s 35 suites and rooms, as well as all of Fearrington, was designed with one thing in mind: “To exceed expectations,” Fitch says. “Life is full of experiences, and we just want this one to be different. We want people to leave with pleasant memories.”

The Fearrington House Country Inn is one of North Carolina’s only two AAA Five Diamond and Mobile Five Star property, and it was one of the first American inns accepted into Relais & Châteaux, an exclusive association of 456 individually owned inns and restaurants around the world. I’m not privy to Relais & Châteaux’s exact standards or requirements, but I bet each inn has two things in common: guests should feel pampered, and they should not want for anything, not even a departure from the grounds.

Aside from several shops, the cafe, and The Fearrington Granary restaurant, which is open for lunch and Sunday brunch, guests have access to bikes and trails, bocce and tennis courts, a gym and two pools, a garden room with a fireplace and complimentary champagne and tea, all kinds of special events, and even a few waterfalls and lakes, at least one of which is good for fishing. And if all that wears you out, a massage therapist is on call to soothe away any stress.

If you want to explore beyond Fearrington’s boundaries, the village is convenient to several championship golf courses, fine and casual dining, and all the arts and entertainment the Triangle has to offer. The inn has six vacation packages to choose from, including The Girlfriends’ Getaway, which I plan never to tell my wife about.

Or, you could do what Fitch and 1,800 others have done — move there. Tired of driving from his home in Chapel Hill to his office at Fearrington, Fitch built a new house in Fearrington 20 years ago. Now he enjoys the small village life with his son, Greg, and daughter, Keebe, who also live and work here.

Not many developers live in a development they’ve built, let alone never pursue another project so they can focus all their attention on a single life’s work. But then again, not many have built places like Fearrington.