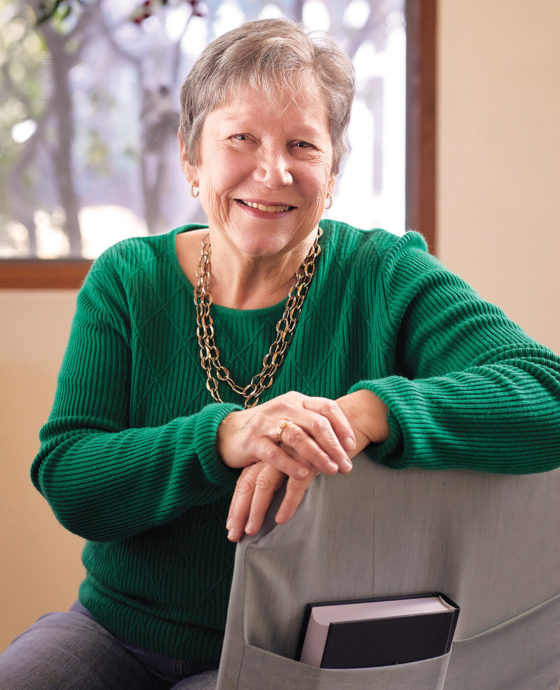 Only a couple of times did calls come during the middle of the night, but when they did, Terry Taylor answered. She vividly remembers the one that came one morning at 2 a.m. The man had a raging fever and was on the verge of delirium. “We ran and got him, put him in the car,” Taylor says. “I drove.” Before pulling into the hospital from the dark mountain road, she glanced in the rearview mirror. Her physician husband was cradling the young man, wiping his brow. The year was about 1990, and the young man, stricken by AIDS, had come from Florida to the North Carolina mountains to die. Taylor, a trauma nurse, made sure that he wouldn’t die alone.

Decades before Taylor ever held a stranger’s hand as he died from complications of AIDS, she saw firsthand the monumental hurdles that gay and lesbian people faced. Born in Charlotte in 1941, Taylor grew up tagging along with her father, a physician, while he made his rounds. “I was turned on by everything — the tubes and the smells,” she says. “I knew I wanted to work in a hospital.” She went off to nursing school in Durham, and while there, in 1960, her sister, Tonda, was outed as gay to her father. This was 13 years before the American Psychiatric Association determined that homosexuality was not a disorder, and Taylor’s parents responded poorly to Tonda’s coming out, as many families did. Taylor had known her sister to have crushes on girls when they were growing up, and she was incredulous at her parents’ reaction. “How gays were thought of — even by intelligent doctors!” she says. “It was a nightmare.” For Taylor, the experience laid the groundwork for a lifetime of compassion for people who many dismiss as somehow broken.

In the mid-1980s, study of the human immunodeficiency virus (HIV) and acquired immunodeficiency syndrome (AIDS) was still very much in its infancy. Judgment of homosexuality had coalesced into a persistent false narrative: AIDS was a “gay” disease. Many people with the disease were ostracized by their families and friends and left to die alone. In a tragically ironic twist to Taylor’s story, her own father and heterosexual brother, Sam, contracted HIV from contaminated blood during medical procedures in 1984, both developing full-blown AIDS and dying within a couple of years. Before his death, Sam spoke at church and community events about the rejection that AIDS patients experienced, but he told his sister that the best thing he did was much simpler: “He said, ‘Being with them in a support group once a week and hearing their stories and putting my arms around them … I think the best thing I do is cry with them,’” Taylor remembers. “That did it for me: I could do something.”

By spring of 1989, Taylor and co-organizer Pat Geiger were running the first HIV/AIDS support group in western North Carolina from Taylor’s living room in Boone. People didn’t want to be seen going into an advertised AIDS group downtown at night, but Taylor’s home out in the country was an ideal location. A small gathering, no more than eight or nine, convened every other week for a couple of hours. Snacks were offered and the sessions began when participants raised their hands to talk about what was going on in their lives. There was no space for levity: The fellowship was safe and precious for people with a diagnosis that, at the time, meant almost certain death within two years. Sometimes, Taylor’s husband would take a look at some of the group members’ rashes to save them a trip to the hospital. The couple also knew of one dentist in town who would treat AIDS patients.

“Hearing their stories and putting my arms around them … I think the best thing I do is cry with them.”

The Taylors’ work extended beyond those nighttime support meetings: She and her husband spent about a month caring for Boone’s first AIDS patient after his discharge from the hospital. And when patients were too sick to make it to the support group, the group went to them. Taylor and her crew organized hot meals and carpools for errands and appointments. “People were coming from Florida,” she says. “We had an older gay couple from Myrtle Beach that moved to Boone when they heard of the support group.” There were hemophiliacs and a student from Appalachian State University. “It wasn’t about dying,” Taylor says. “I swear to God, I don’t remember anyone talking about, ‘I’m scared to die.’ It was, ‘I’m so afraid of being rejected by people I love.’ That was their fear.”

Local radio and papers accused Taylor of “encouraging” homosexuality. Once, a woman stormed into her husband’s doctor’s office to announce that she would no longer see him because his wife was supporting gays. Another time, a dead rat turned up in her mailbox. Taylor was undeterred. “I was so gung ho,” she says. “You know when you know in your soul that what you’re doing is right.”

Years passed and some hearts changed. Eventually, Taylor was tapped by the Parents, Families, and Friends of Lesbians and Gays (PFLAG) National AIDS Task Force to travel the country and share her stories to raise AIDS awareness. She had a knack for bringing the house down with her zippy sass and compassion. Her reputation for humanizing the statistics was earned: “Eighteen [out of 19] of the people I worked with during those early years died,” she says. She sees irony in her having to be present for people during their last weeks or months because they had been cast away by society and churches. “These were real people,” she says. “This was really happening.”

Mercifully, being HIV-positive is more manageable today; more people are living with the disease instead of dying from it; and fewer people turn their backs on those who suffer terrible, deadly illnesses. But in the 1980s and ’90s, things were very different — save for a few angels like Terry Taylor. Today, the woman who dared to hold the hands of men who lay dying hundreds of miles from home — who has turned their stories into lessons in compassion for the living — looks back with gratitude. “I did touch people,” Taylor says. “I made a difference. That’s the bottom line.”