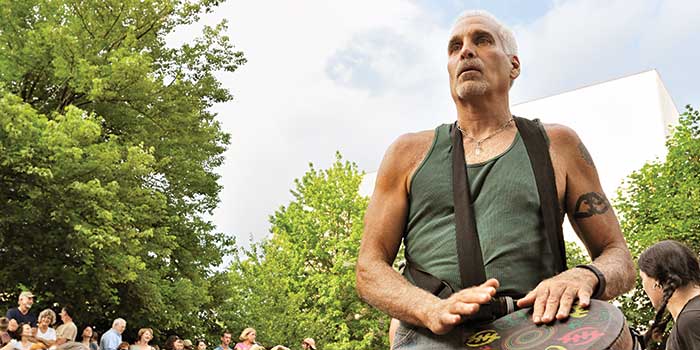 Asheville heralds the end of the workweek with the sound of hand drums. The Asheville Drum Circle, a more-than-10-year-old Friday night ritual, attracts a dozen or so drummers to downtown’s Pritchard Park, a tiny triangle between three roads, where Asheville citizens often gather for protests, craft fairs, and hula-hoop workshops.

The circle begins to take shape around 5 p.m., when about a dozen djembe players take seats on the amphitheater benches that rise along one side of the park. Musicians with larger drums stand facing the brick courtyard below. A few drums start a rhythm; others add layers. Congas, dunduns, and shekere fill in. No one leads, and there are no verbal cues about what to play or when to begin; it’s less like a hierarchy and more like a hive, the songs speeding up, slowing down, and changing on their own.

By 6 p.m., musicians, spectators, and dancers fill the park.

It makes sense that the Asheville community would express itself through music. It’s where traditional mountain music and Robert Moog’s synthesizer are celebrated with equal zeal — and where the talent heard from street corner buskers can rival the acts booked at venues around town.

“For us in town, it’s not an oddity or an amusement,” says Kevan Frazier, historian at the University of North Carolina at Asheville. “It’s an example of the depth of cultural diversity that exists here.”

It happens that Pritchard Park — which, according to the Mountain Xpress, has spent time as a hog wallow, post office, and bus hub — was renovated just before the drum circle started in the early 2000s. At the drum circle, it holds everyone at once: tourists, locals, folks with great differences
in health, age, style, origin, beliefs; somehow, the little park has room.

A flash mob emerges around 7 o’clock — folks wearing pink and purple feather boas perform a synchronized dance to recorded music. The drum circle pauses, and the drummers turn around so that the two groups stand facing each other, divided along the middle of the courtyard. Some drummers play along, and when it ends, people clap.

The flash mob might pause the drum circle, but nothing can stop it except bad weather. A wind comes through that Friday, flipping up the leaves of the sugar maple, and a dark cloud seats itself over downtown’s brick skyline. When the rain comes, some folks head for shelter, but others stay. The remaining dancers lift their fingers to meet the rain and holler; some take off their shoes.

By nightfall, the rain clears and the circle grows to about 50 drummers. The park is wild at the center with dancing and noise, tame at the edges where people just watch, their arms crossed over their chests.

In the center, the beat is both one collective sound and the many sounds of individual instruments. It’s possible to get into a rhythm with a lone djembe or cowbell just by standing close to it. For a time I sync up with a woman who dances on the other side of a conga. She pushes her rib cage forward and back with her drumming while maintaining eye contact. There are many opportunities to connect like this over music, nonverbally, smiling and looking each other in the eye. Again, the diversity: Everyone is here. It feels like the highest expression of a neighborhood block party. And as long as the weather is warm enough to beat the drums, it’s free every
Friday after work.

This story originally appeared under the headline, “Beat of a Different Drum.”

Erin Sroka is a freelance writer and a native of Durham. She wishes her family members would be more supportive of her efforts to start a drum circle at home.