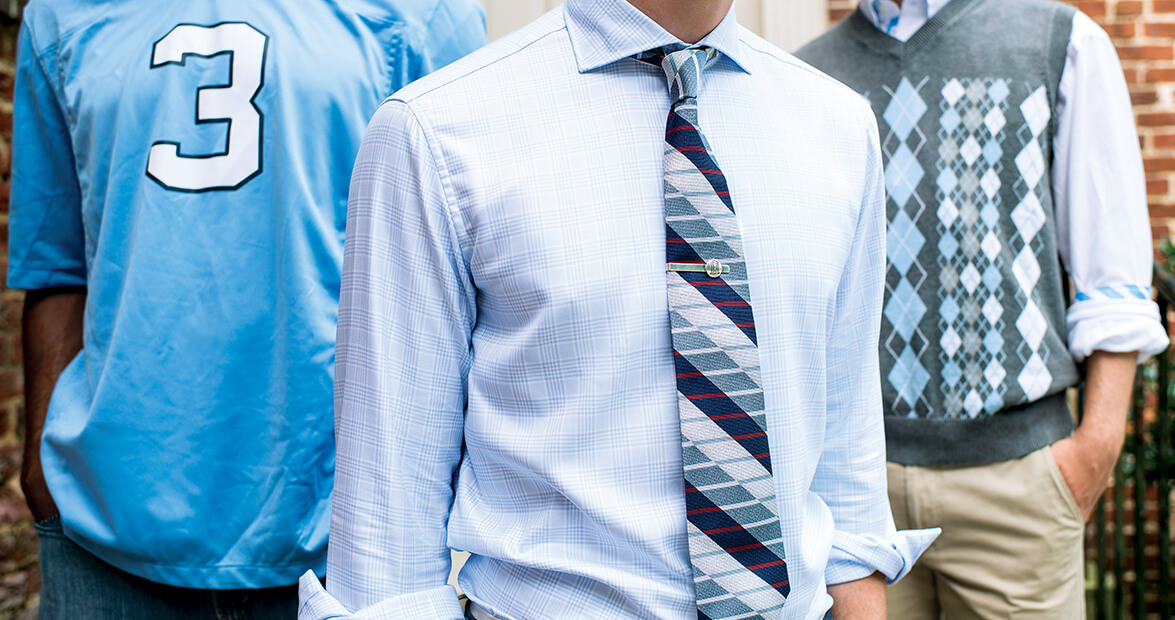 I wore one of three things to Kenan Stadium as an undergrad at the University of North Carolina: a throwback white jersey, a newer blue jersey, or a $5 T-shirt with an interlocking “NC” on the front. I knew that the only other people wearing jerseys in the stands seemed to be the players’ parents. Many women wore blue blouses and dresses. The men mostly wore light blue oxfords or polo shirts with khakis. I refused. When I was younger, I believed you shouldn’t dress like you’re at a polo match when you’re at a football game.

I asked Alexander Julian about this. He’s the designer whose family owns Julian’s clothing store, making him the foremost authority on Chapel Hill couture. “It’s a social event,” Julian says. “The older you are, the more folks you look forward to seeing there — and people like to look good for it.” It was a maddening thought for younger me. I loved football. I thought everybody else looked stodgy.

A few years removed from it all, I’m starting to see where he’s coming from.

“Sometimes the fashion show was better to watch than what was on the field.”

For years, people wore coats and ties to football games in Chapel Hill. By the early 1980s, that tradition had faded at UNC and elsewhere across the country. Greg Batten was in the stands at Kenan in 1981 when the eighth-ranked Tar Heels took their second loss of the season to the second-ranked Clemson Tigers. He usually wore a T-shirt to games as an undergrad — the jersey craze wouldn’t hit for another decade or two — but once put on a blazer and button-up because he was an escort for a girl on the homecoming court.

“The girl I escorted won, but I was trying to watch the game and it kind of cramped my style. Now I’m more for comfort,” says Batten, a 1983 graduate who now wears a Nike brand, short-sleeved button-up to Kenan. He always came to watch the game, but often ended up people-watching. “Sometimes the fashion show was better to watch than what was on the field,” he says.

Then, 10 years ago, UNC hired big-time coach Butch Davis, who promised to coach us back to national prominence. We had to look good.

After Davis arrived, Julian noticed an uptick in bow tie sales at his family’s store. The bow ties mostly belonged to the Greeks in their pizza-slice corner of the end zone ­— the part of the student section that always showed up late to games. Today as you move around the stadium, away from the student section, bow tie sightings are rare, but the Carolina blue collared shirts remain.

If you’re in the Chancellor’s Box or the Pope Box, a 1,050-seat hospitality area with climate control, your shirt is fresh from the cleaners, tucked into your khakis. Your loafers are immaculate. The same goes for the Blue Zone, the premium seating structure behind the east end zone. Your attire must match what you paid for those tickets, which keep you out of direct sunlight and in cushioned seats.

You can find this look — let’s call it the Carolina Look — inside Julian’s store on Franklin Street. Last year, the school added to its football uniforms the classic argyle pattern that’s long adorned its basketball jerseys. “It’s hard to wear a large Old Well. It’s hard to wear a large Tar Heel,” Julian says. “One of the reasons I did argyle to begin with is because it’s perennially fashionable. It works for girls as well as guys.” That pattern, introduced by Julian in the early 1990s at the request of basketball coach Dean Smith, now runs along the neck of the football jersey, the side of the pants, and down the middle of the helmet. Last season, in their new look, the Tar Heels went 11-3. “If we had gone 2-12,” Julian says, “then people would be blaming the argyle.”

Taylor Sharp has been going to UNC football games since 2005. On game days, he woke up early, painted his body blue, and got a front-row seat in the end zone. By the time he graduated in May, he’d started wearing something new. “I don’t like the stereotypical Carolina polo that everyone wears, but I love getting a Jordan polo,” Sharp says, referring to NBA legend and UNC alumnus Michael Jordan. “That’s been my recent attire.”

I can hear it in his voice. I think he knows what I now know: Eventually we all end up in an oxford and khakis at Kenan Stadium. I don’t wear jerseys or cheap crew-neck T-shirts anymore. At my last UNC football game, I wore a relatively expensive blue V-neck.

“As you mature,” Julian says, “T-shirts don’t look as good.”

He’s right, of course. What I wear to the next home game will be out of my control.