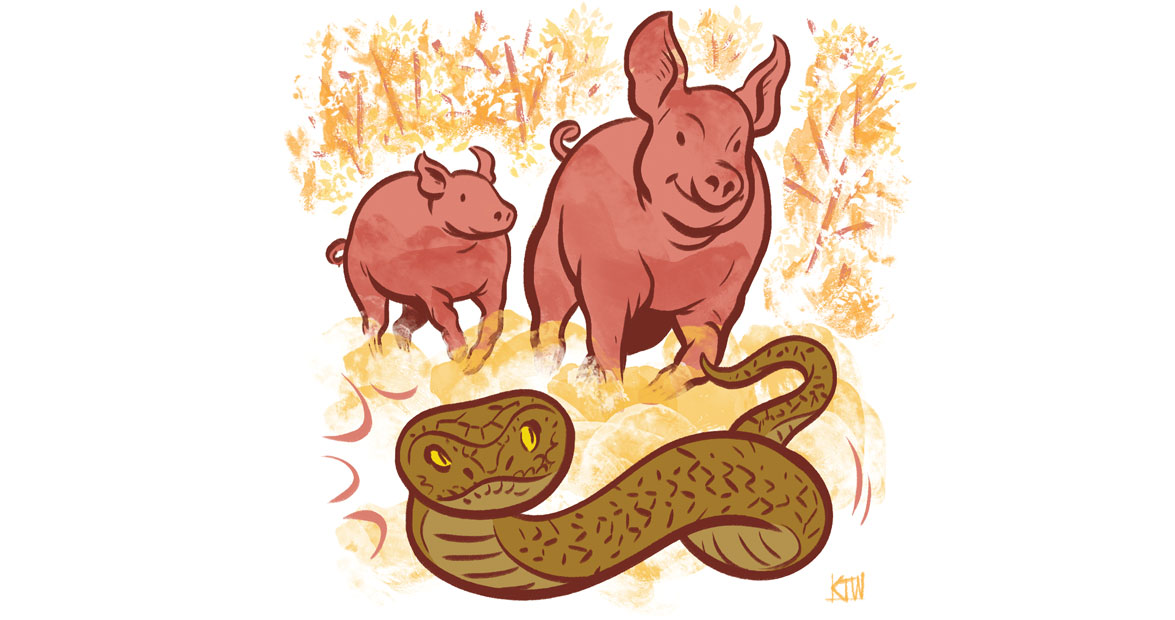 The Legend of Snake Island

The name is ominous, seemingly straight out of a horror movie: Snake Island. When Dr. Lucius Morse dammed the Rocky Broad River to create Lake Lure in the 1920s, the valley’s snakes were forced to retreat to the safety of Yacht Island, as it was then known, where Morse hoped to establish a yacht club and a community of luxury homes. The story goes that a desperate Morse offered $500 to anyone who could get rid of the snakes — after all, developers didn’t quite share his vision for a peaceful lake resort when they discovered the thriving population of copperheads and rattlesnakes.

None of the attempts to eliminate the snakes worked, though, until a local farmer from up in the hills loaded a boat with his pigs, rowed to Snake Island, and unleashed a snorting vengeance on the unwelcome residents. It did the trick: Within months, the hogs devoured the snakes, earning the island yet another new nickname: Pig Island. Rumor has it that the pigs got so fat from their feast that either they had to be removed from the island on a barge — or the island was the site of Lake Lure’s first pig roast.

There’s something down there, that’s for sure. Exactly what “it” is — a creature that darts around the depths of Lake Norman — is harder to determine. Since 2002, dozens of sightings of an unexplained creature have been reported in this lake that boasts 520 miles of shoreline and spans four counties northeast of Charlotte.

Cap’n Gus Gustafson, a fishing guide who spends 300 days a year cruising the lake, tells the legend as it has evolved in the 55 years since the man-made lake was completed: As he tells it, marine biologists conducting experiments with fish farming crossbred Wyoming Buffalo Carp with Arkansas Blue Catfish in a pond near Denver in the early 1960s. They fed the already large fish some chicken laced with steroids, and when furious rain damaged the Cowans Ford Dam, the steroid-enlarged monsters escaped and found their way into Lake Norman.

The biologists, Gustafson says, “didn’t say a word about it, because it was kind of a clandestine operation to begin with.” One mysterious lake monster is worrisome enough, but multiple lake monsters — the result of a science experiment gone wrong — well, that sounds more like a tall fish tale. But in a lake as large as Norman, with a depth of 130 feet in some places, Gustafson says there’s bound to be more than one of these giant catfish-like creatures, which have been collectively dubbed “Normie.”

As the number of Normie sightings has increased over the years, Matt Myers created a website — LakeNormanMonster.com — to give folks a place to report sightings. Details vary: Some reports refer to a 200-pound creature and describe it as “Nessie-like.” Others report seeing a giant fish that steals smaller fish right off the end of a line. And more eye-witnesses claim spotting inexplicable waves in otherwise calm waters with no boats around.

“Certain lakes in certain places just have some kind of a legend,” Gustafson says, “and Normie is ours.” Be careful, though, if you head out on the lake on the night of a full moon: Sightings reach their peak then, which begs the question: Does the moon make Normie — or the people who look for him —go a little crazy? That’s a mystery for another day.