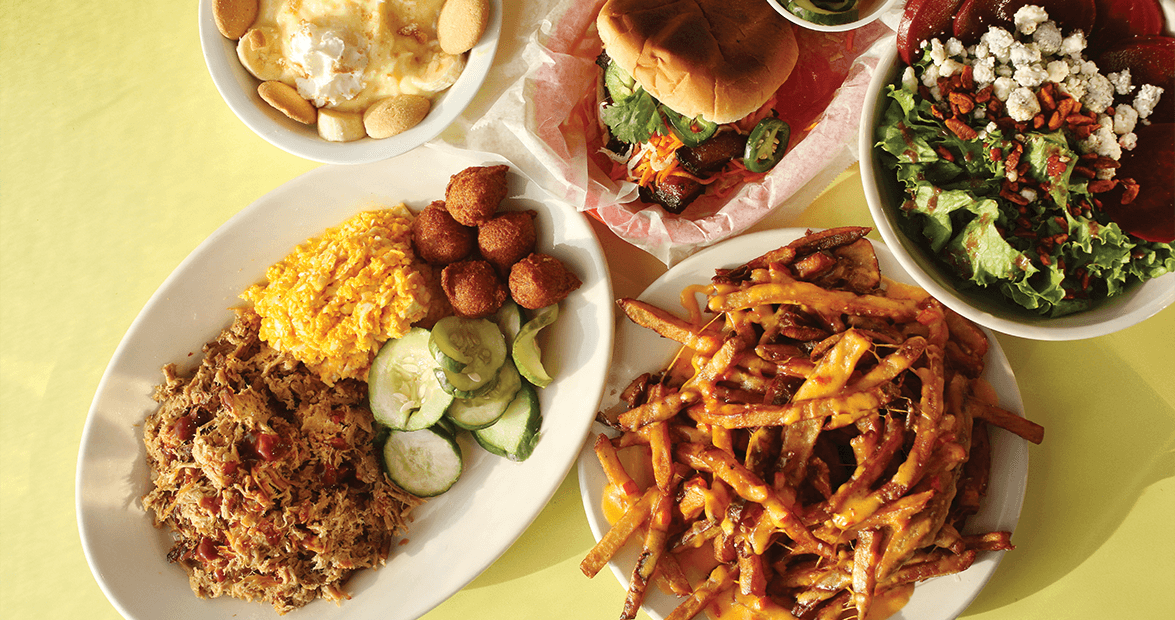 It’s called The Pig, as if, after all these  months and the hundreds of miles I’ve spent wandering through this swine-rich state, it’s come to this: pure simplicity, unadorned sincerity. As if this journey, which has taken me east and west, north and south to achieve a single end — that of eating barbecue, and BBQ, and bar-b-cue — and to hear every myth there is, every creation story, has finally made me understand what that meat really means here, whether it’s sprinkled in vinegar or smothered in red sauce. Now, just two miles away from where I live in Chapel Hill, I have found this, a joint that says what it is and is what it says, and what, in the end, all of this is all about: the pig.

The Pig belongs to Sam Suchoff, who is a 33-year-old California dude — pertinent facts, both of these. California dude is pertinent because seriously? California? And 33 because I’ve eaten barbecue older than that. He is, by far, the youngest cook I’ve met on this expedition. It’s fitting, though, and necessary, because if our children’s children’s children are going to be eating barbecue in the year 2525, someone from Generation Y is going to have to keep the pit fires burning.

That man is Sam Suchoff, and The Pig is the place.

It’s a small joint, The Pig, smaller than any joint I’ve visited. The seating area is one long row of open tables and chairs and a bench that spans the windowed wall. Walk in, order, take a number, sit down. Get your beer from the cooler or your cola from the dispenser. That’s about it. There is absolutely no pretense about it at all; in fact, even noting the lack of pretense seems pretentious on my part. It’s in a homely clump of stores — not even a strip mall — on Weaver Dairy Road, right next door to East Chapel Hill High School.

Luckily, ambience is not what’s on sale here.

It’s the pig. And the chicken. And the fried catfish and the tempeh. Tempeh, for those who don’t know, is a wild animal often caught and brought to grill here in Chapel Hill, though not as often elsewhere in the state. It’s very tasty.

Other menu items that might bemuse a barbecue traditionalist: country-fried tofu, a shiitake po’boy, and something called Sprouts-N-Shrooms — all of which are incredibly delicious and entirely legal.

The barbecue is roughly chopped and hickory smoked in-house, and seasoned with a cider vinegar sauce. It’s good on a plate or on a sandwich. The chicken is cooked low and slow and chilled superfast. Steam is moisture, and when you chill the meat quickly, it keeps the moisture inside. Then, when you order chicken, they’ll drop it into the fryer, then the batter, then back into the fryer to crisp it up.

What the exquisite Vietnamese pork cheek tastes like is beyond my skills as a writer to describe. It simply must be eaten to be understood.

Before it was The Pig, the space in which Sam’s eatery resides was once another fine barbecue joint in its own right. It was called The Barbecue Joint, and this is where Sam was introduced to the culinary magic of pork. He worked there for three years; his prior restaurant cooking experience was exclusively French. But it’s hard to believe that his interests were ever elsewhere. Sam is a laid-back kind of guy. He’d probably be really good to have around in an emergency situation because I just can’t imagine him getting too overwrought about anything. But he is clearly obsessed with The Pig. Or the pig. All of it. Bottom to top, end to beginning. 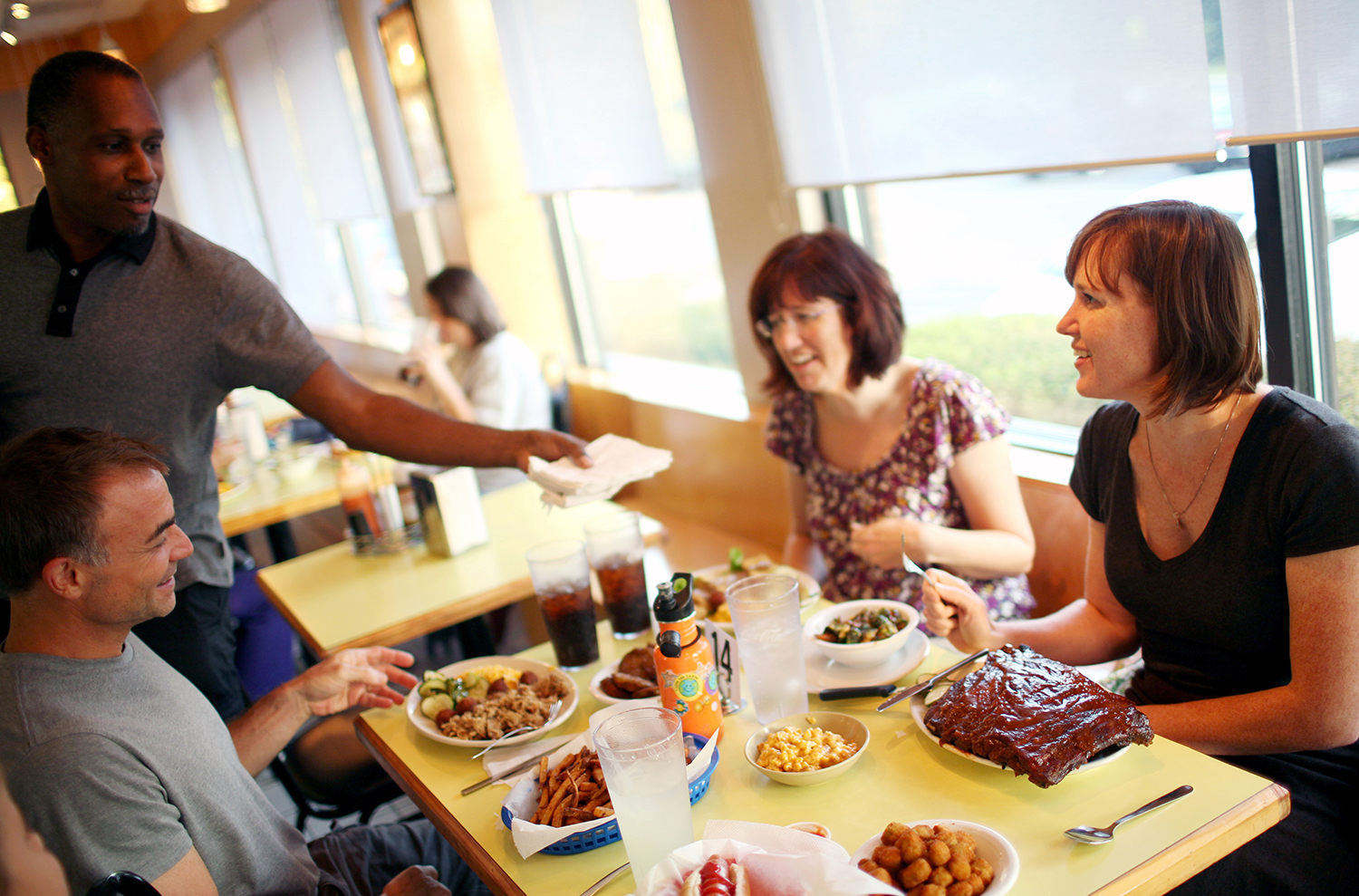 The Pig’s general manager, Spencer Pope, passes a handful of napkins to Camille Heaton, who thinks she can eat ribs with a fork. Pope knows better. photograph by Travis Dove

The beginning is the life of the pig itself. As it says on the menu: The Pig. Serving locally raised, antibiotic- and hormone-free pork since 2010. This is a little different from what you’re likely to see in a preponderance of other barbecue joints. I like it, because what could be better than eating good barbecue that’s good for you, good for the pig (at least, you know, until you kill it), and good for the environment? But Sam, he doesn’t make a big deal about it; he doesn’t like to. He wants people to come to The Pig because the food is good, not because — or not only because — it’s part of an effort to support sustainable farming. Most of the restaurants engaged in selling socially responsible, ethically raised food are high-end places catering to a well-heeled crowd; when a barbecue joint does it, it might come off as feeling forced — or, worse, offensive.

“A few customers have actually gotten angry about it,” he says. “That’s why I don’t talk about it a lot. It’s secondary. But this — places like The Pig — is the future of sustainable food. It has to make a jump from a niche thing to day-to-day life because there’s no other way to support the people who are making it if it doesn’t.”

There are words I hear tossed around at The Pig that I’ve never heard before, and some of them almost make me blush.

Pig carcass utilization, for instance. Sam did some consulting work on pig carcass utilization — but who among us can’t say the same, really? His work was for a company called N.C. Choices. They were trying to encourage farmers to raise their pigs locally and sell them locally — the whole hog. Though there’s still lots of fleshing out to do, Sam believes in the idea and works toward it now.

The Pig buys the whole hog and cooks the whole hog, just not all at the same time. There’s a box for each part of the pig — ham, shoulder, loin, etc. — and so, hypothetically, if you were a mad scientist, and if you were left alone long enough in The Pig’s freezer, you could make a Frankenstein pig.

Sam’s new and, for him, most exciting venture is ham. At this writing, he has 18,000 pounds of ham hanging “in various stages of decay,” as he puts it. Sam’s working with Rufus Brown over at Johnston County Hams. Rufus salts the hams, cures them, and then hangs them in a barn for a year and a half. Every month or so, Sam sends more hams his way. After curing for that long, some people would be tempted to call it prosciutto. But Sam doesn’t want to. He wants to call it country ham.

“Country ham has its own traditions,” Sam says. “Like bologna. Really good bologna — like the kind I make — is called mortadella, but I’m not going to call it that, though I’d probably sell more of it if I did. That’s not the idea. The idea is getting people to expect more from what something is when it’s at its very best.”

This story was originally entitled as “The Pig” and appeared in the Carolina ‘Cue section of the December 2014 issue.