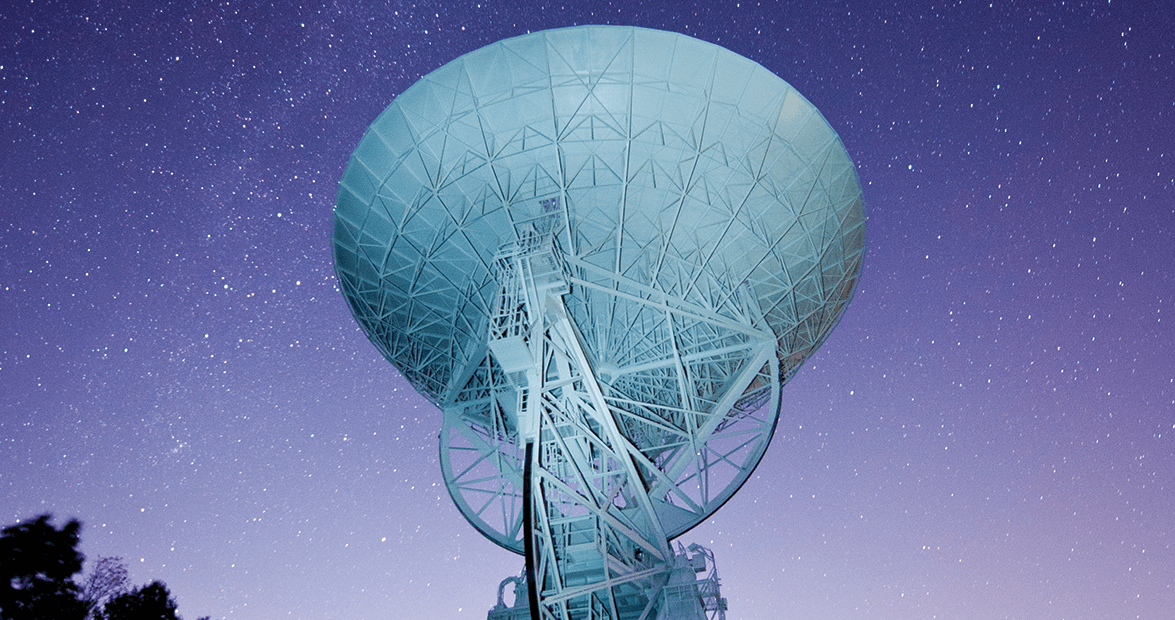 The road to the Pisgah Astronomical Research Institute (PARI) is one of those mountainous affairs that’s both serenely picturesque and jarringly treacherous. With dips and curves aplenty, it forces drivers to slow down and enjoy the scenery, lest they be flung from the mountain or sent careening into a grove of hemlocks. Soon enough, however, the endless forest parts, and visitors turn onto PARI’s campus. Everything seems perfectly normal. Until, that is, you see the imposing military-style guardhouse. It’s empty, and there are friendly signs instructing visitors to keep driving. But what is that thing doing here?

Moments later, understanding creeps in: You see the giant parabolic dish telescopes; the low-slung, blue-brick buildings scattered throughout the valley; the hundreds of parking spaces occupied by a couple dozen lone cars. It’s an astronomical observatory. The place is impressive — immense, even — and improbable. It almost feels like a secret lair from a James Bond film, the hangout for a villain bent on world domination.

Nothing quite so nefarious happens at PARI today. A few decades ago, though? We can’t be completely sure.

In 1962, a year after President John F. Kennedy inaugurated the space race, the National Aeronautics and Space Administration (NASA) needed a new facility somewhere on the East Coast to track its unmanned satellites and manned space flights. The site they selected was southwest of Brevard, a little more than eight miles as the crow flies, in the heart of the Pisgah National Forest.

Dubbed the Rosman Satellite Tracking Station, the facility was dedicated by NASA in October 1962, encompassed a square mile, and featured 19 radio antennas that could receive signals from space day or night, regardless of cloud cover. In retrospect, NASA probably couldn’t have picked a better site: Not only was there a natural bowl shape to the terrain, which helped shield it from radio interference, but the lack of nearby power transmission lines or scheduled airline flights overhead was a big plus.

During its 19 years of service for NASA, Rosman employed upward of 450 people at its peak, and it played a supporting role in all of the Apollo moon landings. But governmental priorities shifted, and in 1981, Rosman moved into the second phase of its existence under the auspices of the Department of Defense.

There is plenty of speculation about what went on at Rosman during the Cold War, when it became a top-secret site off-limits to all but those with proper clearances. With all of its sophisticated radio antennas, it’s safe to assume the technicians there were intercepting Soviet satellite communications in some way. But we may never know for sure.

One thing we do know is that the Soviet Union thought enough about the facility to have its own spy satellites keep tabs on it. Knowing they were being watched, the folks at Rosman decided to send a friendly message and painted a big smiley face on a 15-foot-wide radio satellite dish, a sly wink to the other side. That dish, dubbed “Smiley,” is still here today, one of the few remaining clues of the site’s role during the era.

After the Cold War ended, though, the government didn’t see the need to maintain the site any longer. And so, in 1996, Rosman was mothballed. The most sensitive equipment was carted away, and the site was turned over to the U.S. Forest Service. The federal government had spent hundreds of millions of dollars to build and maintain the facility over the years. But now, seeing no real need to use the site’s remaining antennas to spy on the nearby owls and bears, the Forest Service made plans to demolish the facility and let nature take over once again. By all accounts, it looked like Rosman’s run was finished. 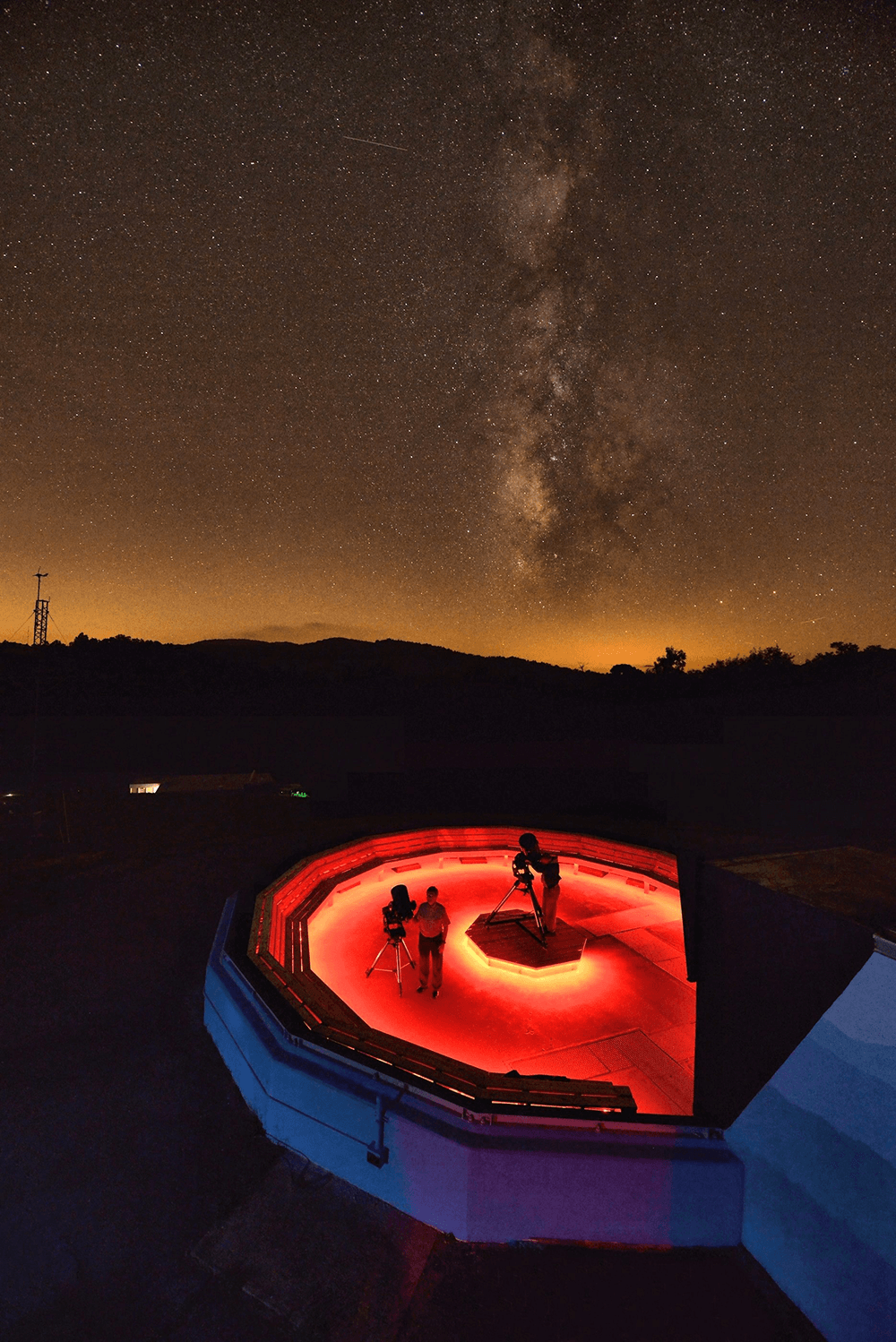 Luckily, someone came along who had something else in mind. Greensboro resident Don Cline had always been interested in gadgets and technology. After selling his telephone-testing-equipment company in 1996 and officially retiring, he looked around and saw the United States slipping behind in science. He decided to use his retirement and resources to show people of all ages that a career in science is possible and exciting.

“Every person should have the opportunity to experience hands-on science and decide if it’s something they find interesting and enjoy doing,” he says.

As part of his efforts, Cline donated money to build observatories with reflecting telescopes at two North Carolina colleges, as well as a new visitor center at an existing observatory for another in-state school. At some point in this process, Cline learned about Rosman and its old radio antennas. He drove over for a visit in 1997, thinking one of them could be moved and used as a telescope at a nearby university.

When he arrived at Rosman, though, Cline had to laugh at what he saw. The radio antennas were massive, with the largest two standing 150 feet tall and weighing 350 tons above ground. No way were they going anywhere. That’s when another idea began to take hold: Why not turn the abandoned site into a cutting-edge science center? It took a couple of years, a big check, and an act of Congress, but Cline found a way, and in January 1999, the newly rechristened Pisgah Astronomical Research Institute was born.

Today, PARI has four radio telescopes, 12 optical telescopes, and 50 earth-science instruments, which measure things like the weather and plate-boundary movements. All but the two largest telescopes are online and can be operated remotely (with the proper training and passwords). The whole facility is geared toward providing scientific opportunities for anyone “from K to gray,” as Cline puts it. From students to retirees, whether their interest is up in the stars or down below the ground, PARI is open to anyone who wants to get involved and explore.

Cline estimates that PARI reaches more than 24,000 people a year. One example is Ashini Modi, a remarkable 10-year-old girl from Shreveport, Louisiana. After reading an article about black holes, Modi (whose first name means both “hope” and “lightning”) wanted to see if the black holes she could observe in our Milky Way still existed.

She learned about PARI and contacted Christi Whitworth, the facility’s education director, who quickly recognized the young girl’s talents and became a mentor. Modi was given access to use PARI’s equipment over the Internet to conduct her own research from nearly 800 miles away.

“The Smiley radio telescope helped me collect the data and study the Doppler effect,” Modi says. “I did that by testing the neutral hydrogen velocity in the areas with and without black holes. Smiley has opened many new doors of curiosity for me.” 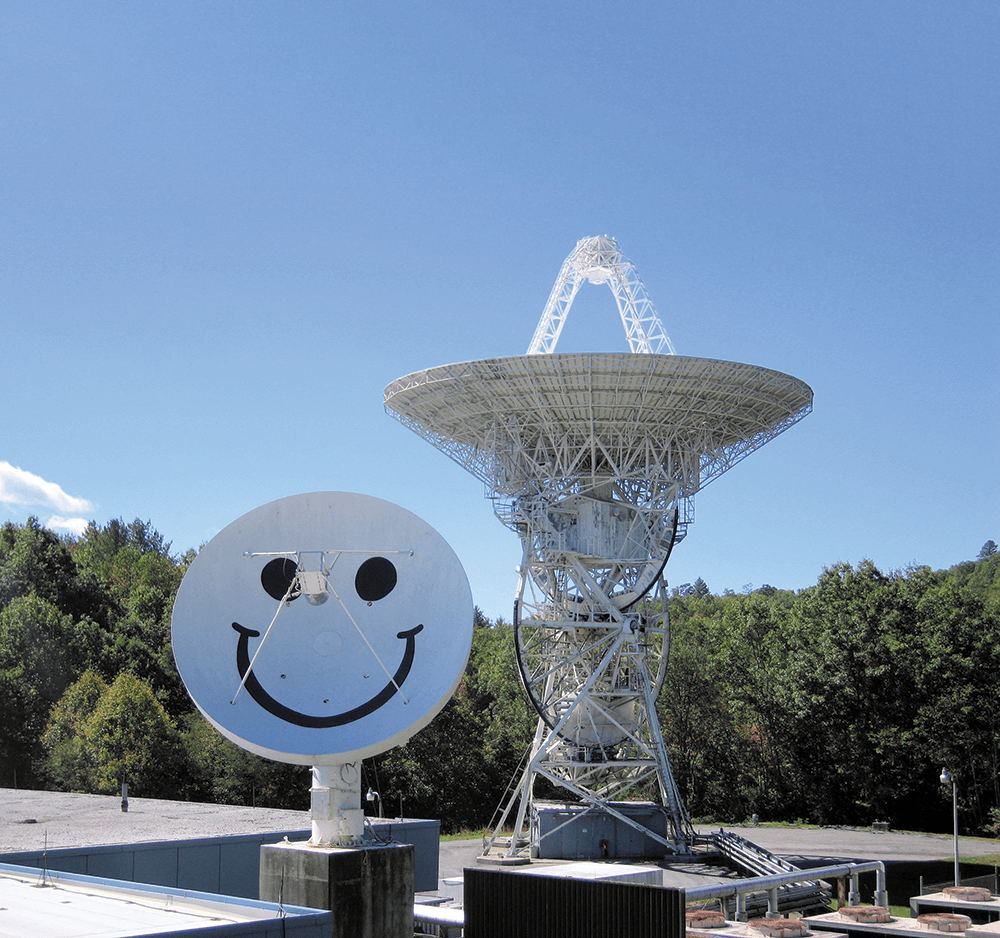 When someone like Modi realizes the joys and rewards of science, it makes the more than $20 million Cline has contributed to PARI and other science centers around the state worthwhile.

“That’s what I consider the payback for this investment,” he says.

It’s all about that moment of discovery.

The Pisgah Astronomical Research Institute is open weekdays for self-guided tours and has a scheduled tour each week at 2 p.m. on Wednesdays. Its campus includes a museum and hiking trails.