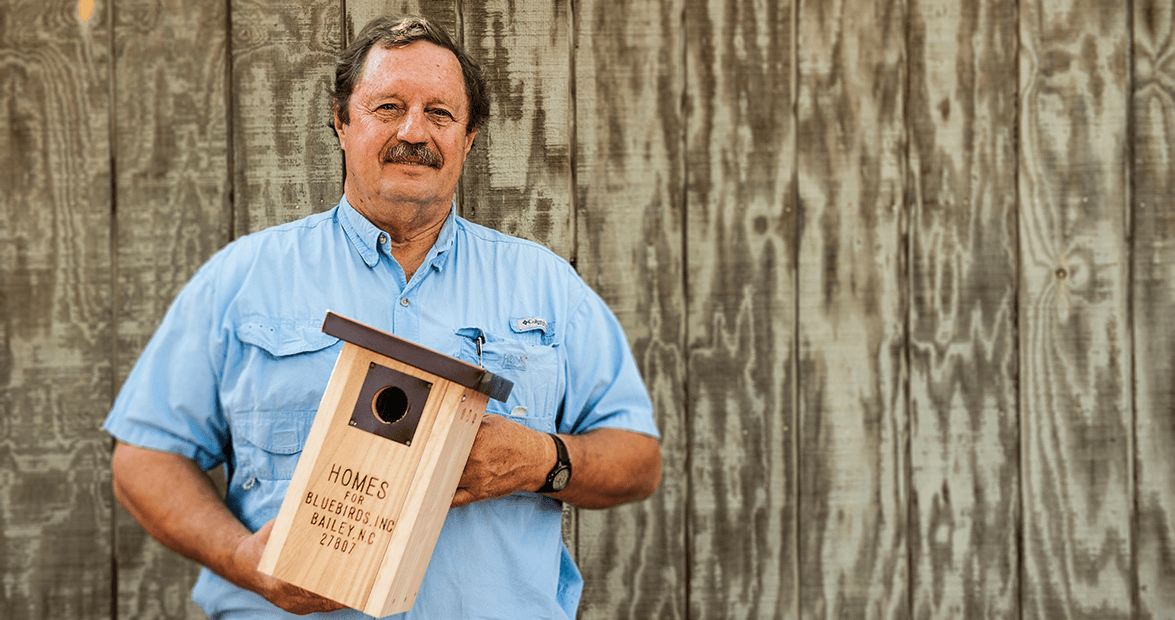 From his Nash County farm, Jack Finch helped reverse a generation of eastern bluebird decline, bringing back the flicker of so many bright wings that locals nicknamed him “The Birdman of Bailey.”

His motive was simple: He’d watched his winged friends slowly disappear, victims of oil-fired heaters in tobacco barns whose vented pipes acted like bluebird traps. So one day in 1971, Finch and his son, Dan, hammered together seven little boxes. Two days later, the flashes of blue appeared again.

Finch died in 2006, having founded Homes for Bluebirds and won national praise as a conservationist, but his son keeps the box-building ethic alive at Finch Nursery in Bailey. The nursery grows its own trees and cuts timber in its own sawmill, turning out 5,000 boxes a year, all of them built by longtime nursery worker Cecil High.

But Dan will tell you even today that his father didn’t really design any of those boxes. The bluebirds did.

Bluebirds have long symbolized all that is carefree and lighthearted. But in a lifetime of building bluebird houses, Jack Finch learned this avian truth: Bluebirds do not compromise. They will not shrug their shoulders and take whatever knothole life affords them, regardless of the amount of sunshine headed their way.

The box must be the right size, not so shallow that a rival starling could stick its beak in the nest. The hole must be the right diameter, not so accommodating that an invading egg-eater might squeeze through. Bluebirds like wide-open fields. They like ventilation holes. If the house doesn’t suit the female, no young bluebirds will be born there.

Finch tried all manner of sizes and shapes, but he settled on the variety that sold quickest on the bluebird market: 11 inches tall, 6 inches wide, 6 inches deep, and lined with aluminum to deter woodpeckers.

The Finches know bluebirds are tough customers. But it’s worth the work to have such good neighbors.