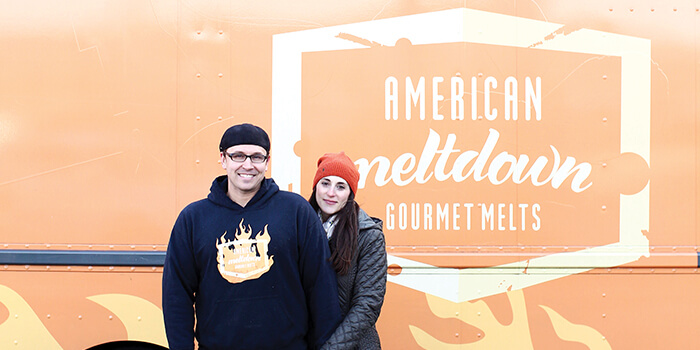 The American Meltdown truck, painted bright orange with flames sprouting from the floorboards, rolls into downtown Durham like a grilled-cheese machine on wheels. At the helm sits Paul Inserra, the sandwich virtuoso with a cheddar-coated spatula, the chef who launched the grilled cheese sandwich into the highly selective world of food truck dining, combining a Mom-made-it lunch staple with fried brussels sprouts.

He squeezes the cheese wagon into a spot on the American Tobacco Campus, where his melts compete with far swankier and more complicated fare. Here, Durham’s sophisticated palates line up for baguettes or bulkogi — Korean tacos — or chive dumplings.

But as quickly as Inserra can toss a slab of butter on the grill, the hordes queue up a dozen deep for Inserra’s trademark eats: The Kubla Khan, the Matador, Pigs ‘N’ Figs.

In what is probably the state’s most famous finicky food town, American Meltdown shines by offering the world’s most universal sandwich recipe: cheese turned into ooze. “That’s really all we do,” Inserra confesses. “We just add a bunch of stuff between bread and cheese.”

But he sells his idea short.

The surest sign of this sandwich’s staying power is its front-and-center presence at any food truck rodeo. To nosh a grilled cheese in a sea of food trucks is to salute the building blocks of cuisine, and to know that you don’t need to reach as far up the dining ladder as a Korean taco to experience the perfect marriage of crispy and gooey.

Inserra starts with that buttered grill, then paints each slice of locally made Guglhupf bread with a thin coating of olive oil. Next comes the cheese, and the thickness of the slices depends on the sandwich. “Enough to make it gooey or stringy,” he says. “We’re not the food truck where it’s a big mess and you have to eat it with 20 napkins.”

Finally he grills each bread slice to a golden crisp. “I don’t like it too black,” he says, tapping the slice to check for sogginess. “Golden crisp. That’s half our reputation.”

When the rush overtakes the truck, and the pace breaks 100 sandwiches an hour, Inserra ties a T-shirt around his forehead. And when grilled-cheese traffic reaches a particular frenzy, with clusters of fans packed around the window, he reveals his secret weapon: “I cook the sausage with a blowtorch.”

No one knows the name of the culinary innovator who first melted a chunk of cheddar between two slices of bread, took a bite, and declared the meal finished — a masterpiece in its simplicity. The creation of the grilled cheese sandwich remains a piece of guesswork, but whatever its origins, the grilled cheese persists as a beloved dish, a token from the warm kitchens of childhood.

First popular in the early decades of the 20th century, it became an economical meal thanks to the twin developments of processed cheese and sliced bread. During the Depression, a working Joe could find quick sustenance from the affordable ingredients.

The sandwich only took the name and shape we recognize when more prosperous decades arrived. As a two-slice sandwich, it could be dipped into tomato soup, a classic pairing that led to further experimentation.

Inserra’s work reflects the daring of early sandwich pioneers, those who elevated the grilled cheese to a cult status — a new level of devotion fueled partially by nostalgia and partially by the meal’s limitless possibilities. His experiments in Durham mirror sandwich construction in California, where grilled cheeses are garnished with jalapeño peppers and leeks. Grilled-cheese artists nationwide have been known to add zucchini, artichokes, arugula, and kimchi, all nestled in a puddle of warm Monterey Jack.

Inserra, 34, started his venture in post-collegiate limbo, an English major in search of a lucrative path. Once he’d settled on a Durham-based food truck, he considered ramen noodles, dabbled in hot dogs. Then, after a string of informal taste tests, he judged grilled cheese the winner. Shortly afterward, Inserra discovered that these sandwiches served as a perfect blank canvas for an inventive food truck chef.

Inserra soon learned that because of its simplicity, the grilled cheese sandwich offered endless opportunities for improvisation. He could alternate breads, juggling white, wheat, and sourdough. He could insert any cheese he wanted: Havarti, Gouda, manchego.

Thus inspired, he created the Kubla Khan sandwich out of smoked pulled pork, Asian coleslaw, Dijon mustard, and provolone. He built the Scarborough Fare sandwich from an herb pesto composed of parsley, sage, rosemary, and thyme. He invented Pigs ’N’ Figs, a grilled cheese made with Black Mission figs, speck, local goat cheese, and a dribble of reduced balsamic vinegar on sourdough.

“The New York Times got ahold of that one,” says Carly Hall, American Meltdown’s events coordinator. 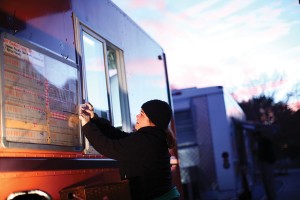 Durham loves the offbeat melted cheese, served with arugula pesto or sliced apples. When American Meltdown sets up around Fullsteam Brewery, which makes its beer with locally farmed basil and sweet potatoes, Inserra’s crew will tear through 25 pounds of brussels sprouts. Last April, at the final run of the Grilled Cheese Invitational in Los Angeles, Inserra and the American Meltdown crew matched grill creations with competitors’ entries such as “The Recumbent Vicar” and “And on the 8th Day, the Lord Created Grilled Cheese.”

And when American Meltdown brought home a trio of awards, they did it with a hat-tip to the Bull City and its gourmet taste buds, where a flaming orange truck feeds a canyon-size love for an immortal snack.

Josh Shaffer is an award-winning writer for The News and Observer in Raleigh. Find his archived stories here.