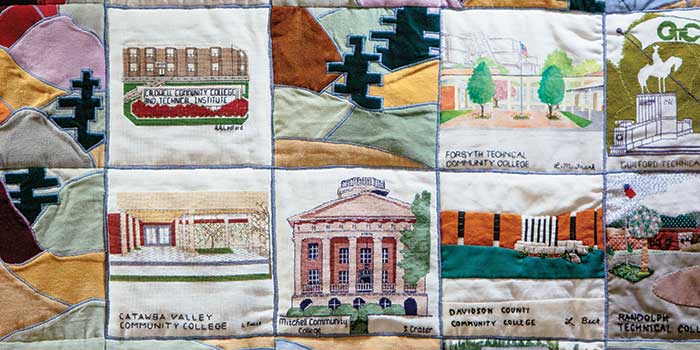 At 58 schools across the state, you’ll find roomfuls of budding electricians, novice computer programmers, junior jewelry makers, and left-footed salsa dancers — most of them sharpening their hopeful trades at night.

The community college experience is different from the four-year ride, where undeclared majors are common. Most often, you walk into community college to learn a very specific thing: Adobe Photoshop. Welding. Bartending. And you walk out a richer person, with a new skill to show off.

So celebrating the community college system — which turns 50 in North Carolina this year — takes on a different form than the homecoming games and commencement ceremonies thrown by the schools’ four-year counterparts.

You can see it inside the president’s office in the Caswell Building, a six-story redbrick structure on West Jones Street in downtown Raleigh. A 12-foot-by-5-foot quilt hangs from the wall, the state of North Carolina stretched across it in seven-inch squares.

Each square represents one of the 58 community colleges statewide, from Haywood in the mountains to Cape Fear at the coast. Made in 1988 for the system’s 25th anniversary, each square is hand-sewn, embroidered, appliquéd, or painted, and most were created by an instructor at the school.

“Of all the artwork we have in the building, that’s probably the most impressive,” says Pia McKenzie, special assistant to the president. “Folks walk through and say, ‘Oh, my gosh.’ ”

On the quilt you see the domed administration building at Nash Community College, crafted by the students of Russ Johnson, part-time art instructor. You see the white columns and red bricks of Pitt Community College and the lighted stone gateposts from Wake Tech.

You see how Alamance Community College quilting instructor Vanessa Evans Brammer chose wool and cotton for the trees and cotton corduroy for the concrete exterior. You notice that quilter Lynda Beck used a splatter-painting technique for the Felix Otis Gee Building at Davidson Community College.

But mostly, you’re reminded of the institutions that may lack pep bands and mascots in animal suits, but still teach a state how to think, build, and create. It’s fitting that the system’s tribute should be a piece of craftwork, a tangible reward for practice and hard work.

Josh Shaffer is an award-winning writer for The News & Observer in Raleigh.