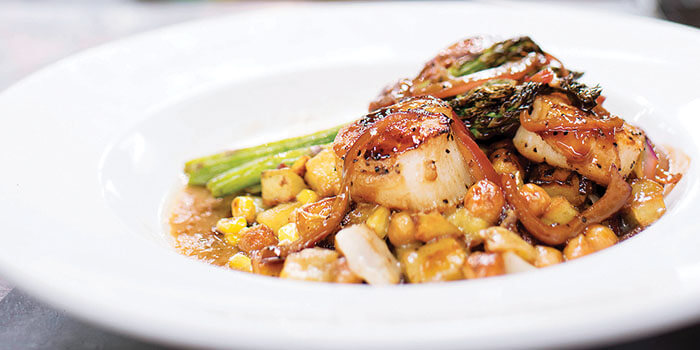 I’m one of those people who secretly believe that there are undiscovered places in the world, tracts of jungle where heretofore thought-to-be-extinct dinosaurs roam. I believe in Bigfoot, Sasquatch, El Dorado; in caves full of gold and ancient bones and the palm-leaved pages of books bound together with the hair from an aurochs’s mane; in words written by someone whose name we will never know. Now, I believe in Saxapahaw, too.

Saxapahaw is an unincorporated hamlet a few miles down a nowhere two-lane blacktop off N.C. Highway 54, halfway between Burlington and Chapel Hill. North Carolina is full of roads like this leading to towns like this. The fields and farmhouses, the long-abandoned barns barely standing, the phantom feeling that you’re driving into a place so enveloped in its own intimate history that you’ll be immediately discovered as what you are: a foreigner, an interloper, a stranger.

Saxapahaw is not quite this. An old town, sequestered, it’s a place where people are going now in order to be strangers, at least for a little while, and some go just to be plain strange. In less than a decade, it’s gone from a settlement in danger of becoming a postapocalyptic mill town to a postmodern cultural oasis. How it came on hard times is a long and complicated story, and its resurrection isn’t easy to elucidate, either. But when you break it down to its constituent parts, the explanation can begin with a gas station and the general store attached to it.

The Saxapahaw General Store is the first thing you see when you drive into the town proper, and from the outside, it’s not the most prepossessing of places — just a low-slung brick building, architecturally inoculated against charm. 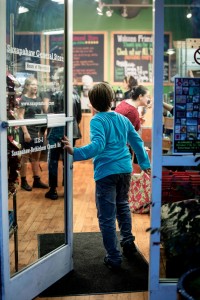 But inside is a different experience altogether. Here is where I could say, This is not your parents’ general store — but in fact it is your parents’ general store, or maybe even your grandparents’: It feels so fresh and real and authentic. I’m not aware of another stop-and-go/convenience store/mini-mart that sells gas, cigarettes, a goat burger, pan-seared diver scallops, kombucha tea, and organic vegetables; gets written up in The New York Times and Gourmet magazine; and sells T-shirts billing itself as “your local five-star gas station.”

Jeff Barney and Cameron Ratliff own, operate, and run the Saxapahaw General Store and have since 2008, when this little town of fewer than 2,000 began to reimagine itself. Jeff and Cameron met in 2006 in Pittsboro, where he was a butcher, and she was a baker, and of course they fell in love and were married and now have one child with another on the way. Jeff looks a little bit like Bill Murray and has that same sort of devil-may-care sardonic charm; Cameron is the more cautious of the two, the rudder, the ex-anthropology major to whom everything is an anthropological study. She looks like a young Glenn Close, and if you think it sounds like I’m casting for a television show, you’d be right, because Saxapahaw is the new Mayberry, and the general store will be the heart of the show, just as it’s the heart of the actual town.

Here is the sole building in Saxapahaw that hasn’t been completely remodeled inside and out. It’s the last retail link between the old town and the new. Old-timers can find a lot of the things they used to find here, including cigarettes and Charmin, Gatorade and Pine-Sol. But note: Right next to the Pine-Sol is Ecover (100 percent naturally derived solvents), and next to the Charmin is Seventh Generation (100 percent recycled), and next to the Gatorade is kombucha. This is why the shop plays such an important role in the new Saxapahaw: Everyone is welcome here. Some of the residents would probably like to see the cigarettes go, for instance, but others wouldn’t, and Jeff and Cameron believe that a general store, by its very nature, should serve the entire community.

“This place,” Jeff says, “is about inclusion and juxtaposition.” Running down the middle of the store is one long wooden table, where farmers and freaks can sit together, eat, and talk. This is a place where polarities dissolve. When the Saxapahaw General Store becomes a television show (and it will, I know this), they’ll have to manufacture some conflict, because there really is none to be seen. Even the staff seems happy, possibly because Jeff and Cameron don’t think of them as staff. They are colleagues, and they contribute mightily to the store’s cohesion and evolution. 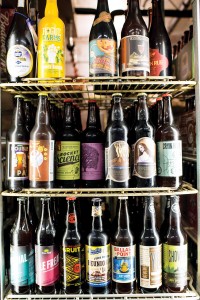 But maybe the real secret to peace is great food. And the presence of great food here is by far the store’s most salient and bewildering feature, inasmuch as discovering a culinary paradise in a gas station in an isolated townlet halfway between Chapel Hill and Burlington has to be bewildering: Gourmet magazine does not generally review gas stations.

Jeff’s plan for the restaurant part of it was, characteristically, to have no plan at all. He bought some local eggs and started offering a basic breakfast. With whatever ingredients he had in the store, he made lunch. Dinner happened almost accidentally, when Paperhand Puppet Intervention had a performance in Saxapahaw and Jeff playfully advertised “dinner and a show.” People came — lots of them. There were only 20 chairs in the store at the time, so Cameron brought out some baskets for tables and milk crates for chairs, and Jeff whipped up some short ribs with a demi-glace.

What the store is serving on any given day is drawn from the materials at hand and based on Jeff’s mood; the menu is written in colorful chalk on the blackboard you see to your left when you enter. Tonight it’s duck confit with green beans and sweet potato mashers, homemade crab cake, beef-and-pork meatloaf, burgers and fries, and about 25 other flavorsome dishes. It’s a kind of peasant food, organic from top to bottom; Jeff likes to think of it as soul food.

“Our method of making food is pretty basic,” he says. “Capturing flavors with caramelization. Nothing gets thrown out. It utilizes the essence of things, the whole animal, a nose-to-tail affair. But what makes it soul food is its uniqueness to this place and these four walls.”

There were some dark times for Jeff and Cameron in the beginning — 2008 was not the best time to open a new store, the pricey new lofts that had been built nearby weren’t nearly filled, and only a few hundred people were coming to the weekly summer farmers market. Now the store is quite healthy, there’s a waiting list for the condos, and closer to 2,000 people come to the farmers market every Saturday in warm weather, doubling the town’s population in a day. The plan is for the store to get a little bigger, but just in an effort to become more general, to have the basic stuff you want, no matter who you are. And they might get a walk-in cooler. But their goal has never been to get big; rather, they want to become more deeply rooted in this community. A brewery recently opened in Saxapahaw, and the general store is going to have its own special brew, its own label — the works. And that — to me, anyway, even more than a piece in The New York Times — is the best evidence that this little store, and the town of Saxapahaw itself, has arrived.

Daniel Wallace is a novelist and the director of the creative writing program at the University of North Carolina at Chapel Hill. Find his archived stories here.